Cataclysms in the distant Universe

Cataclysms in the distant Universe 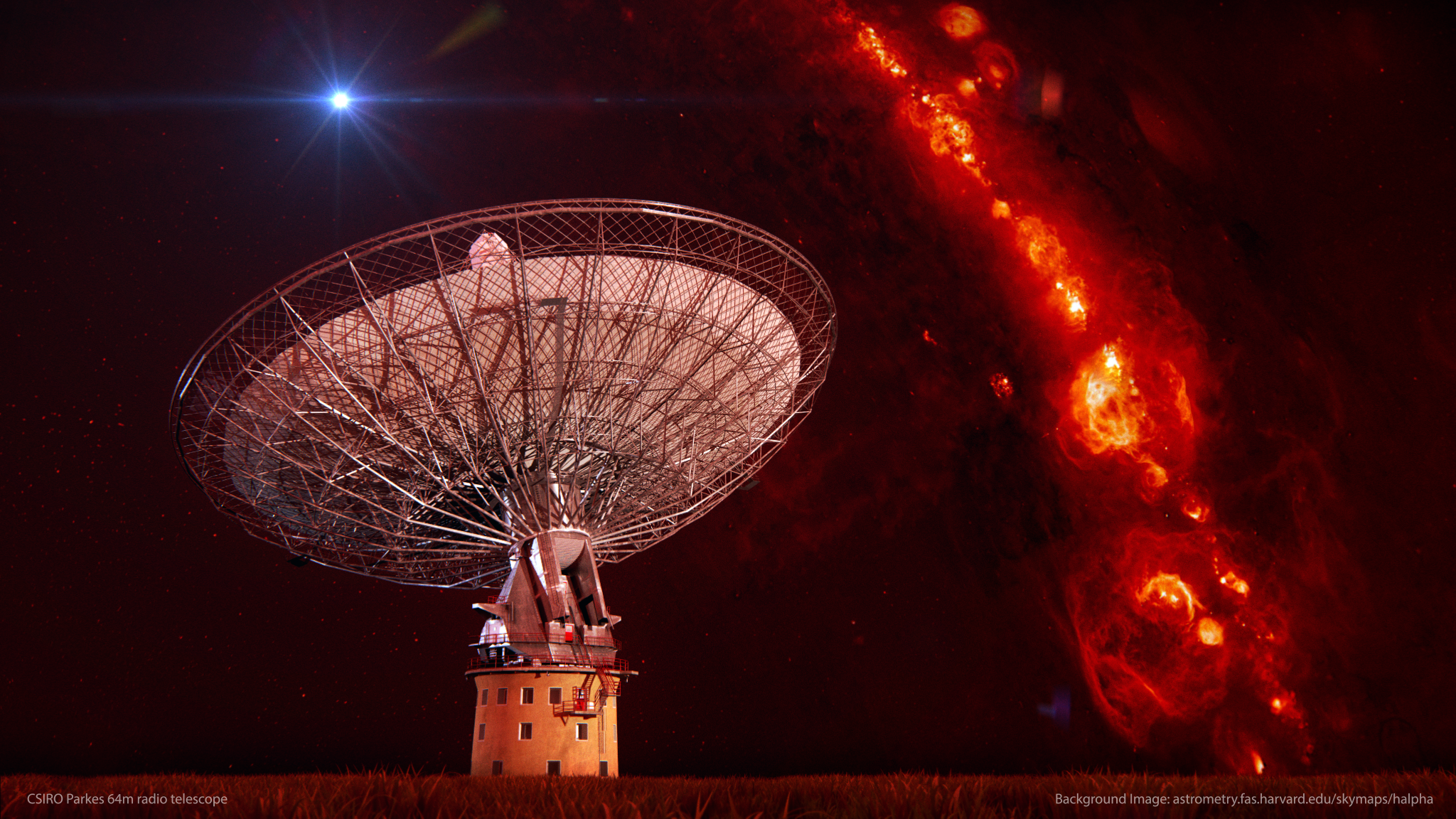 Found with Parkes: radio ‘bursts’ from the distant Universe. The red background in this visualisation is gas in our galaxy. Credit: Swinburne Astronomy Productions, vr.swin.edu.au

In the journal Science today, astronomers using our Parkes telescope have revealed signs of cataclysms in the distant Universe.

They’ve found four ‘bursts’ or ‘flashes’ of radio waves, the furthest one coming from about 11 billion light-years away. And, they say, if you had ‘radio eyes’ — eyes that could detect radio waves — you’d see one of these ‘bursts’ going off somewhere in the sky every ten seconds. It would be like a continuous show of distant fireworks.

What is a ‘burst’? It’s a spike in the radio energy the telescope receives. Here, from the Science paper, is what the astronomers found. (‘Flux density’ means signal strength.) 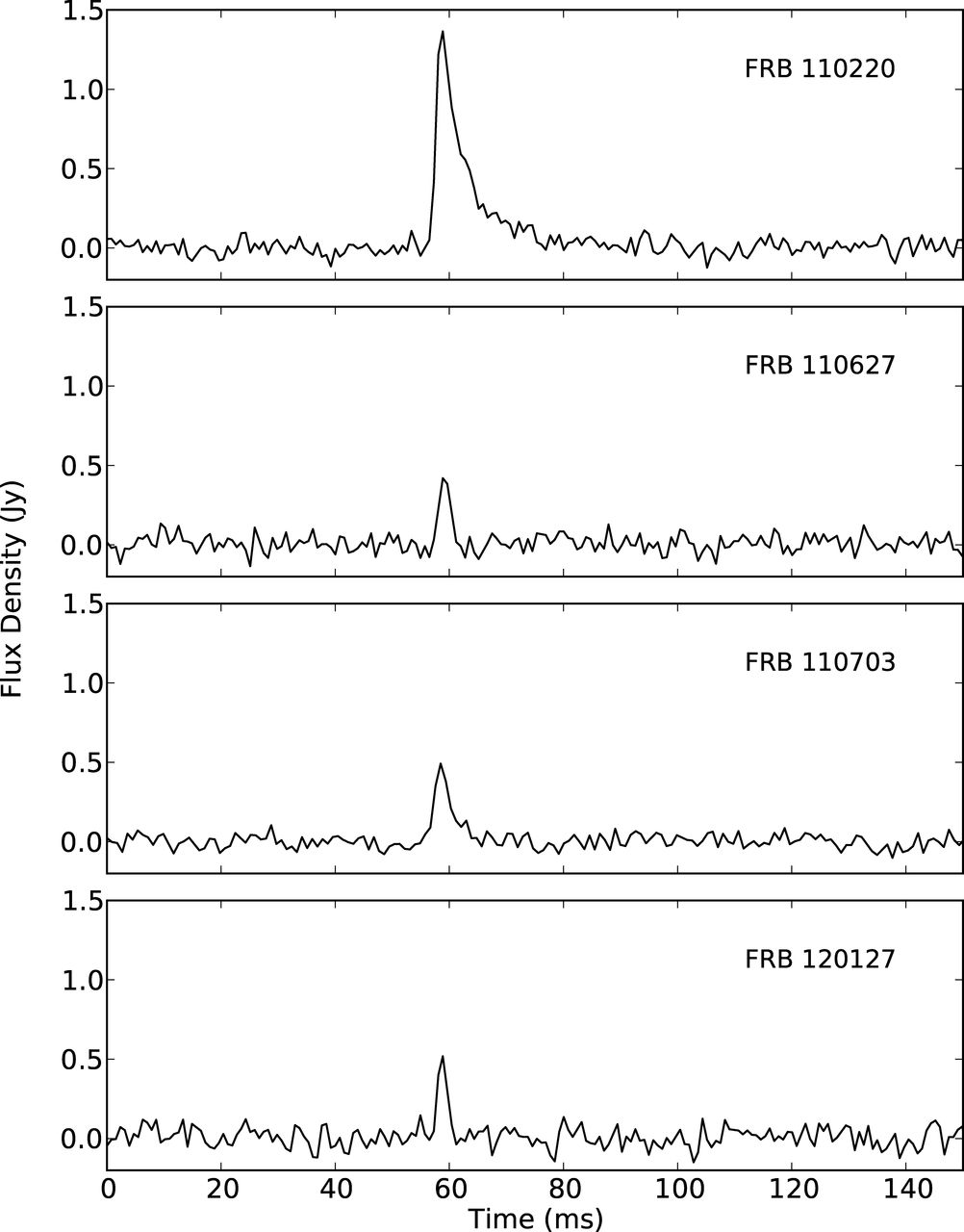 ‘FRB’ stands for Fast Radio Burst. Because they really are very fast, lasting for only a couple of milliseconds.

The speed of the bursts, their strength, and other characteristics of the radio signal, all help to show what the bursts are — or rather, what they are not.

Each burst has a range of radio frequencies, not just a single one. Here, for instance, is one of the bursts (FRB 110220) at different frequencies: 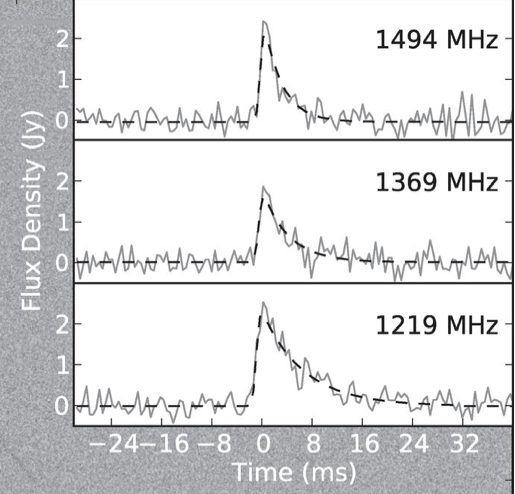 Those curves are slightly different. At 1219 MHz, the energy from the burst is arriving just a bit later on Earth than it is at 1494 MHz.

This is what happens when a radio signal travels through space and interacts with charged particles — electrons — hanging around in space (even the space between the galaxies). The radio waves at lower frequencies get slowed down more than the ones at higher frequencies, so they reach us later.

And the further the radio waves travel, the greater the difference in the ‘slowing down’. That is how the astronomers worked out that the radio bursts they’ve found have come from the distant Universe.

So, what caused the bursts?

The astronomers have ruled out:

So what could the bursts be? In their Science paper, the astronomers speculate that perhaps a core-collapse supernova could interact with an orbiting neutron star to produce the short, sharp, screams of radio waves they observe. But we don’t actually know.

Previous post:
Friday Fish Time
Coming up next:
Cataclysms in the distant Universe