For the first time, we show that sea-level rise in the late 20th century is predominantly caused by the burning of fossil fuels.

Glacier melt is one of the major contributors to global sea level rise. Glacier image from www.shutterstock.com

The sea level changes for several reasons, including rising temperatures as fossil fuel burning increases the amount of greenhouse gases in the atmosphere. In a warming climate, the seas are expected to rise at faster rates, increasing the risk of flooding along our coasts. But until now we didn’t know what fraction of the rise was the result of human activities.

In research published in Nature Climate Change, we show for the first time that the burning of fossil fuels is responsible for the majority of sea level rise since the late 20th century.

As the amount of greenhouse gases we are putting into the atmosphere continues to increase, we need to understand how sea level responds. This knowledge can be used to help predict future sea level changes. 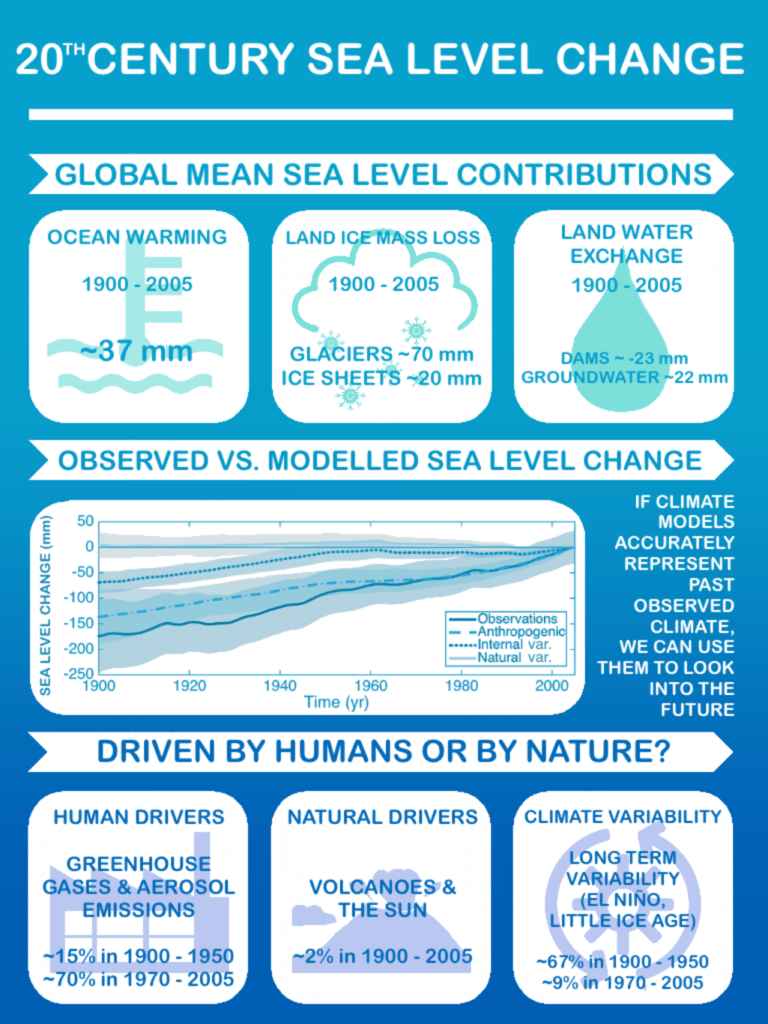 Nowadays, we can measure the sea surface height using satellites, so we have an accurate idea of how the sea level is changing, both regionally and in the global mean.

Prior to this (before 1993), sea level was measured by tide gauges, which are spread unevenly across the world. As a result, we have a poorer knowledge of how sea level has changed in the past, particularly before 1960 when there were fewer gauges.

Nevertheless, the tide gauge measurements indicate that global mean sea level has increased by about 17 cm between 1900 and 2005.

The two largest contributors to rising seas are the expansion of the oceans as temperatures rise, loss of mass from glaciers and ice sheets, and other sources of water on land. Although we now know what the most important contributions to sea-level rise are, we did not know what is driving these changes.

Changes in sea level are driven by natural factors such as natural climate variability (for example El Niño), ongoing response to past climate change (regional warming after the Little Ice Age), volcanic eruptions, and changes in the sun’s activity.

Humans have also contributed to sea level rise by burning fossil fuels and increasing the concentration of greenhouse gases in the atmosphere.

We used climate models to estimate ocean expansion and loss of mass from glaciers and ice sheets for each of the individual factors responsible for sea level change (human and natural). To this we added best estimates of all other known contributions to sea level change, such as groundwater extraction and additional ice sheet contributions.

We then compared these model results to the observed global mean 20th century sea-level change to figure out which factor was responsible for a particular amount of sea level change.

Over the 20th century as a whole, the impact of natural influences is small and explains very little of the observed sea-level trend.

The delayed response of the glaciers and ice sheets to the warmer temperatures after the Little Ice Age (1300-1870 AD) caused a sea-level rise in the early 20th century. This explains much of the observed sea-level change before 1950 (almost 70%), but very little after 1970 (less than 10%).

The largest contributions to sea-level rise after 1970 are from ocean thermal expansion and the loss of mass from glaciers in response to the warming from increasing greenhouse gas concentrations. This rise is partly offset by the impact of aerosols, which on their own would cause a cooling of the ocean and less melting of glaciers.

The combined influence of these two factors (greenhouse gases and aerosols) is small in the beginning of the century, explaining only about 15% of the observed rise. However, after 1970, we find that the majority of the observed sea-level rise is a direct response to human influence (nearly 70%), with a slightly increasing percentage up to the present day.

When all factors are considered, the models explain about three quarters of the observed rise since 1900 and almost all of the rise over recent decades (almost 90% since 1970).

The reason for this difference can be found either in the models or in the observations. The models could underestimate the observed rise before 1970 due to, for instance, an underestimated ice sheet contribution. However, the quality and number of sea level observations before the satellite altimeter record is also less.

Our paper shows that the driving factors of sea-level change have shifted over the course of the 20th century.

Past natural variations in climate were the dominant factor at the start of the century, as a result of glaciers and ice sheets taking decades to centuries to adapt to climate change.

In contrast, by the end of the 20th century, human influence has become the dominant driving factor for sea-level rise. This will probably continue until greenhouse gas emissions are reduced and ocean temperatures, glaciers and ice sheets are in equilibrium with climate again.

John will be on hand at The Conversation for an Author Q&A between 4 and 5pm AEST on Tuesday, April 12, 2016. Post your questions on the original article, here.