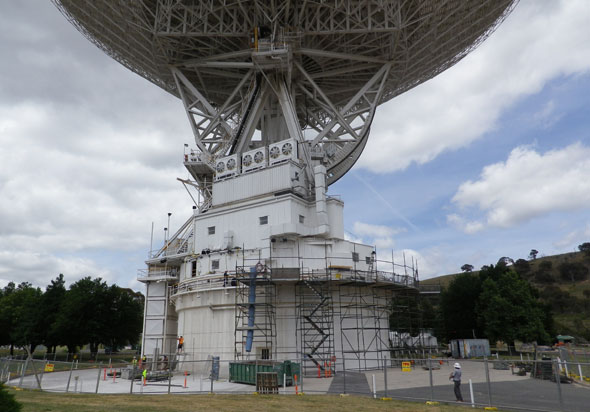 At 70-metres in diameter and 73-metres high, Deep Space Station 43 is the largest steerable antenna dish in the southern hemisphere.

Deep Space Station 43 (DSS43) at the Canberra Deep Space Communication Complex (CDSCC) has been tracking spacecraft for nearly forty years and every now and then we need to give it a break so we can do some major repairs or upgrades.

Over the past 40 years, oil used in the drive system has affected a thin concrete layer which sits underneath the metal plate that runs the entire circumference of the antenna pedestal. That bearing plate keeps the 4,000 tonne moving structure horizontal to better than hair-width tolerances. The oil has effectively softened areas of the supporting concrete and needed to be replaced. 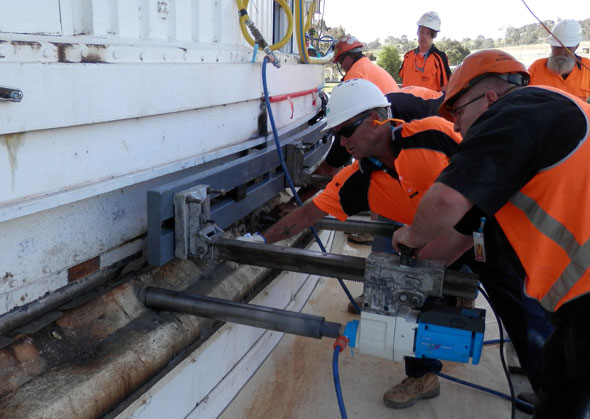 The concrete has to be carefully removed and the underlying surface cleaned so that a new, very strong epoxy and quartz aggregate resin can be used to replace the old support structure. This is a very big, time-consuming job that requires years of advance planning to ensure that the project stays on schedule. It’s also probably the dirtiest job we do on the antenna, with dust and a slurry of wet concrete powder pouring down the sides of the pedestal.

Stage one of the DSS43 upgrade was completed late February with the last of concrete removed and the new epoxy material poured into place. Good planning meant that the project came in a  few weeks ahead of time. The job on DSS43 is far from finished though. 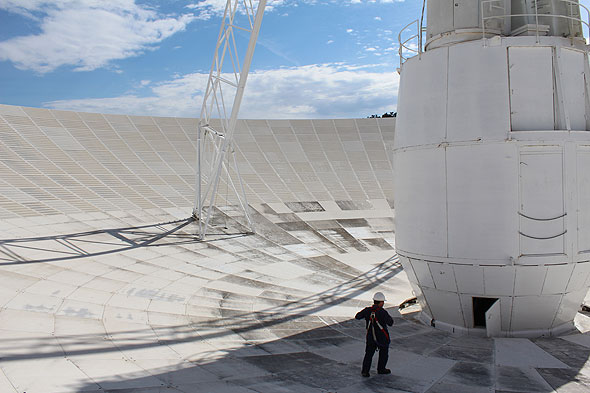 One of the next big tasks in the antennas upgrade is a repainting of the main dish surface.

In the remaining 3-months of downtime, the CDSCC team will also take the opportunity to upgrade some of the antenna’s electrical systems, replacing old cabling and power distruibution boards. They’ll even get a chance to repaint the main dish surface which has become a bit soiled over the past few years.

On completion, this huge project will mean that the big dish, Deep Space Station 43 will celebrate its 40th birthday on April 13th, 2013, looking good, in great shape, and ready for even more work tracking dozens of spacecraft that are exploring the Solar System and beyond.

Previous post:
So many fish, one great map
Coming up next:
Science explodes on the red carpet at the Oscars