What does a modern day scientist say to express that eureka moment when they discover a new jellyfish species? Just ask Sheldon.

The ancient Greeks would shout ‘Eureka’ to proclaim their delight at a new discovery. But what does a modern day scientist say to express that Eureka moment?

Channelling Dr Sheldon Cooper from TV’s Big Bang Theory, ‘bazinga’ was what came to mind when Dr Lisa-ann Gershwin and her colleague, Peter Davie from the Queensland Museum, understood the discovery of a small jellyfish off the Australian coast represented a new species.

“Not only had we found a new species, but we also realised it belonged to a new genus and even a new sub-order of rhizostome jellyfish,” says Lisa-ann.

“It’s pretty rare to discover a new sub-order. This hasn’t happened for well over a hundred years.”

Duly named Bazinga rieki, the wee, grape-sized jellyfish measure just 15 to 20 millimetres at maturity, perhaps mistaken in the past for a juvenile of its much larger cousins.

In a paper published in the Memoirs of the Queensland Museum, Lisa-ann explains how the name is not only a reference to Sheldon’s favourite catch cry.

“The name bazinga also refers to a seven-string harp and the straight radial canals of this new species are reminiscent of such strings.”

Check out the Wikipedia entry on Bazinga rieki and listen to Lisa-ann’s interview on the Science Show on ABC Radio National. 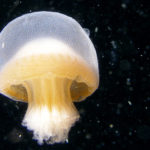 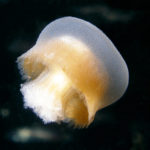 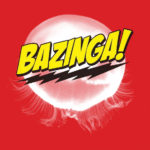 Previous post:
Day two of the skidding of RV Investigator
Coming up next:
The ground beneath our feet: the future of mining