Battling pirates, storms and vast oceans in the name of science

Battling pirates, storms and vast oceans in the name of science

The Lady Amber reached Fremantle last week ending a six-month voyage during which she deployed the profiling Argo robotic sensors that will communicate as mid-ocean climate sentinels for at least the next 5-7 years.

The story of the deployment by the Lady Amber is HERE. If you have Google Earth you can see where the Argo floats are HERE.

Additional sensors have also been deployed during this period by the Royal Australian Navy and US Navy east of the Horn of Africa in a region of the Indian Ocean frequented by pirates. Story HERE. 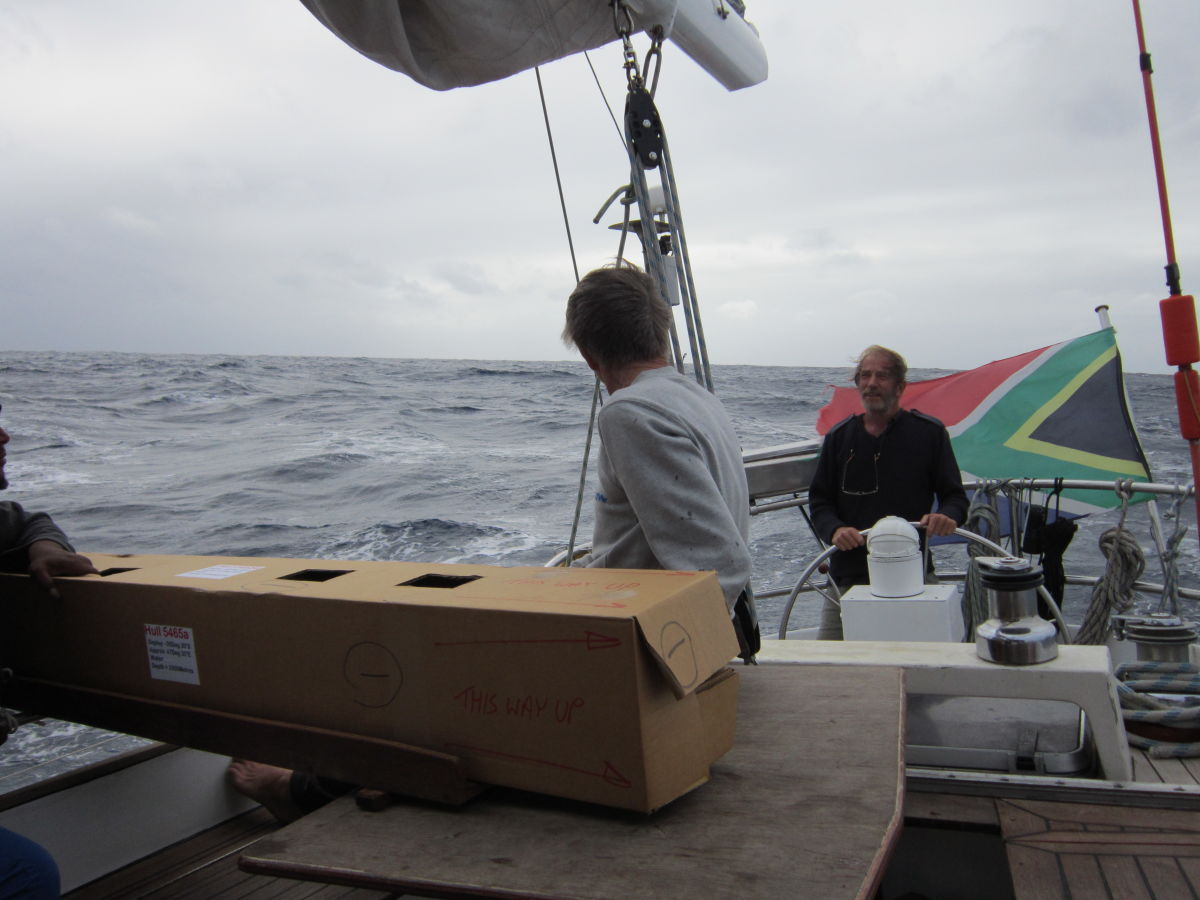 An Argo float being prepared for deployment from the Lady Amber in the Indian Ocean.

Although the Argo project offers significant shipping and defence benefits, its primary objective is to monitor ocean heat and salinity patterns that drive the climate and monsoonal systems which bring rain to Australia. The Indian Ocean is a critical source of rainfall for southern and western Australia, and CSIRO has responsibility for deployment of the robotic instruments in much of the Indian Ocean.

Over 30 nations contribute to the multimillion dollar Argo project, in which over 3000 robotic instruments provide near real-time observations of conditions such as heat and salinity in the top 2000 metres of the ocean.

At nearly two metres in length the drifting profilers, or ‘floats’, are programmed to drift at 1000m for 10 days, then descend to 2000m and then sample as they ascend to the surface to upload their data to satellites.

The program is managed through the UNESCO and the World Meteorological Organisation – Intergovernmental Oceanographic Commission Joint Technical Commission for Oceanography and Marine Meteorology. CSIRO’s contribution is through the Wealth from Oceans Research Flagship.

“National research and operational agencies such as CSIRO, the Bureau of Meteorology and Australian Institute of Marine Science are increasingly reliant on receiving real-time data,” Dr D’Adamo said.

“Australia is the second largest national contributor to the global Argo program deploying more than 490 sensors in the Indian and Southern Oceans and Tasman Sea and providing an infrastructure cornerstone for this innovative but critical research program.”

CSIRO’s Dr Ann Thresher, who leads the deployment project, said the program is heavily reliant on commercial shipping and research and chartered vessels to deploy the instruments.

“This project has become a significant source of data recording change in ocean conditions relevant to climate but our biggest challenge is finding the vessels from which we can deploy the instruments in locations where we can fill gaps that open up,” Dr Thresher said.

“In this case, the Lady Amber provides us with a flexible option supplementing the support we receive in the region from commercial, naval and research vessels.”

The Master of the Lady Amber, Peter Flanagan,said the yacht and its crew of four had sailed 33,000 nautical miles and deployed 55 Argo robotic sensors since leaving South Africa in December, 2010. 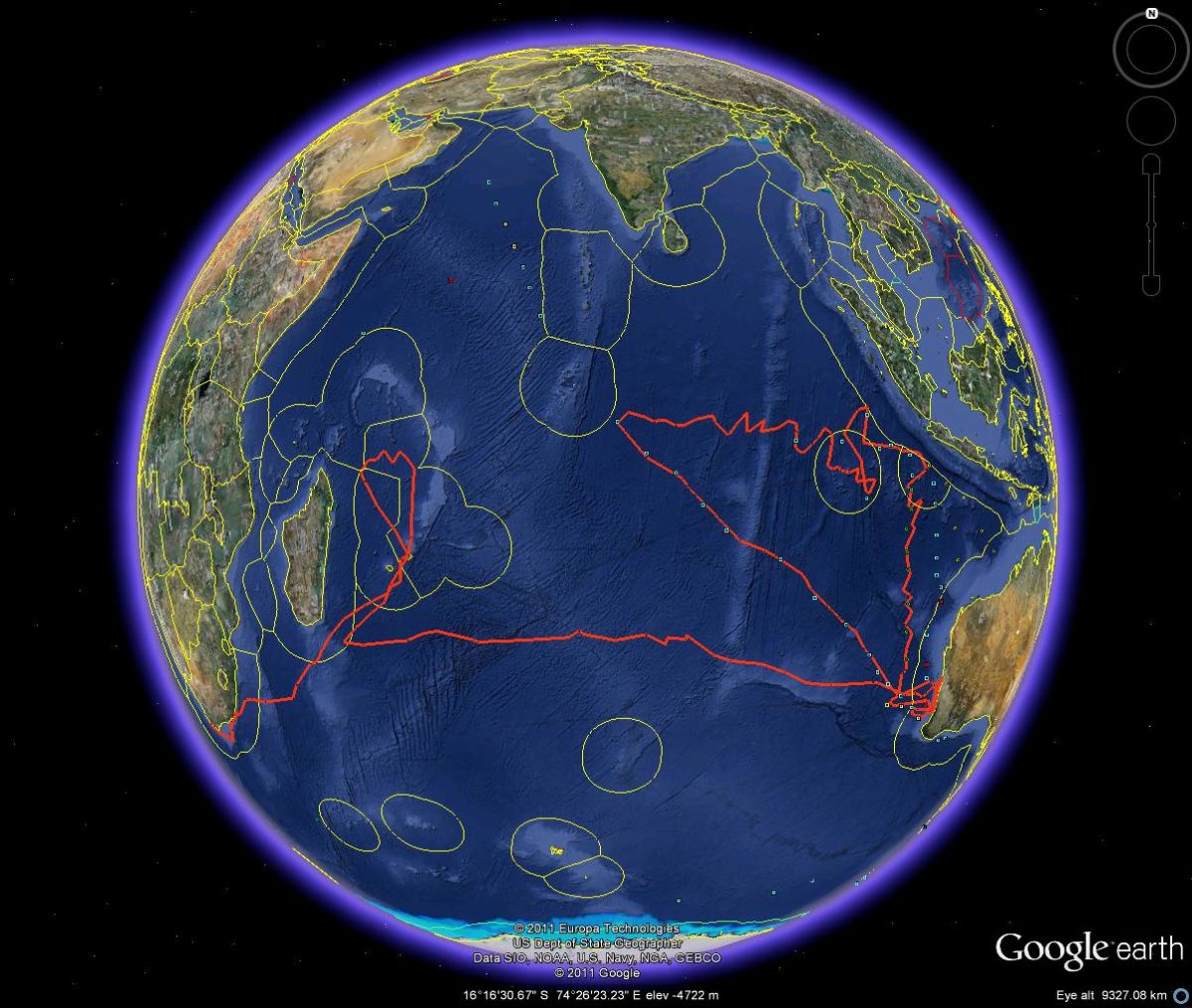 The route of the Lady Amber (red line) across the Indian Ocean.

Captain Flanagan considers the charter voyage as payback for a good life at sea.

“I’ve been on the sea for 48 years and the sea has looked after me,” Captain Flanagan said.

” This is a chance to give something back that will contribute substantially to international science and what we understand of our oceans and how they behave and respond.

“In doing so, we’ve experienced every kind of sea imaginable to fill in the gaps for the Argo program so science can continue receiving real-time ocean information.”

The charter was arranged through French scientist, Mathieu Belbeoch, based in Toulouse, France where he coordinates the global Argo program through JCOMM.

This work is part of the Australian Climate Change Science Program, funded jointly by the Department of Climate Change and Energy Efficiency, the Bureau of Meteorology and CSIRO.