Back to the future to uncover hidden riches

Back to the future to uncover hidden riches 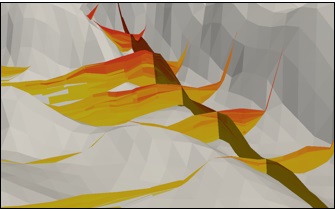 Iron rich material in the deposit: The orange showing areas with the highest percentage of iron.

We’ve created our very own time machine – a new modelling tool that can simulate millions of years of landscape evolution and possibly reveal hidden treasures.

Using the tool called LECODE, and iVEC’s supercomputer, our scientists travelled back in time to pinpoint the exact moment when deposits formed in the iron-rich Hamersley province in Western Australia.

The study has revealed potential locations for hidden and unexplored iron ore deposits.

“We simulated how erosion and water flow influenced the transport of sediment over thousands to millions of years, showing how the iron-rich soils were carried from one place to another to build sedimentary deposits,” says researcher Dr Guillaume Duclaux.

“Sedimentary (aka alluvial) deposits at the Earth’s surface can host significant mineral resources, however exploring them is challenging because they are built from layers of transported material that effectively hide the mineral deposits within,” he says.

“By exploring the material’s movement from the hill slopes to the valleys, we can predict the location of larger deposits hosted underground.”

“Geologists and explorers could use the tool to make new mineral discoveries and it will reduce exploration costs and the environmental impacts associated with traditional drilling techniques,” Dr Duclaux says.

“This research has brought up new questions around the processes that trigger the formation of this type of deposit, which we’re investigating next,” he says. 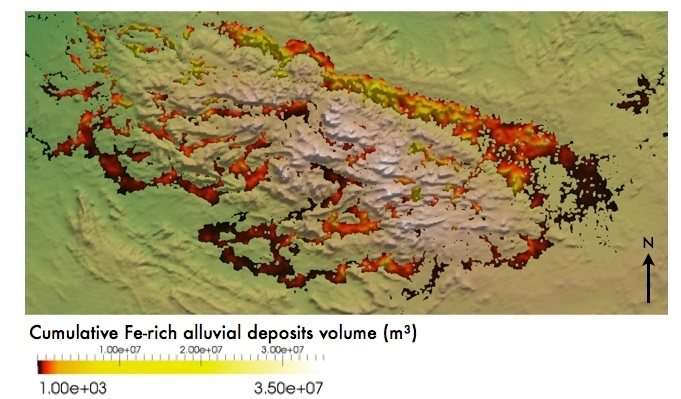 The accumulation of iron-rich (Fe) material in the deposit.

Our tool is a 3D modelling code tailored to solve problems related to basin and landscape evolution. It could also be applied to other resources, such as gold and petroleum.