Australians can be sustainable without sacrificing lifestyle or economy

Australians can be sustainable without sacrificing lifestyle or economy

Australia could make enormous progress towards a more environmentally sustainable future without a major change in what we value. Here's how.

Australia can balance energy, water and food needs with the environment. Flickr: Aaron

A sustainable Australia is possible – but we have to choose it.

That’s the finding of a paper published today in Nature.

The paper is the result of a larger project to deliver the first Australian National Outlook report, more than two years in the making, which CSIRO is also releasing today.

As part of this analysis we looked at whether achieving sustainability will require a shift in our values, such as rejecting consumerism. We also looked at the contributions of choices made by individuals (such as consuming less water or energy) and of choices made collectively by society (such as policies to reduce greenhouse gas emissions).

We found that collective policy choices are crucial, and that Australia could make great progress to sustainability without any changes in social values.

At one end of the spectrum, “technological optimists” suggest that the marvellous invisible hand will take care of everything, with market-driven improvements in technology automatically protecting essential natural resources while also improving living standards.

Unfortunately, there is no real evidence to back this, particularly in protecting unpriced natural resources such as ocean fisheries, or the services provided by a stable climate. Instead the evidence suggests we are already crossing important planetary boundaries.

At the other end of the spectrum, people argue that achieving sustainability will require a rejection of economic growth, or a shift in values away from consumerism and towards a more ecologically attuned lifestyles. We refer to this group as advocating “communitarian limits”.

A third “institutional reform” approach argues that policy reform can reconcile economic and ecological goals – and is attacked from one side as anti-business alarmism, and from the other as indulging in pro-growth greenwash.

Income up, environmental pressures down

My colleagues and I have spent much of the past two years developing a new framework to explore how Australia can decouple economic growth from multiple environmental pressures – including greenhouse emissions, water stress, and the loss of native habitat.

We use nine linked models to assess interactions between energy, water and food (and links to ecosystem services) in the context of climate change. 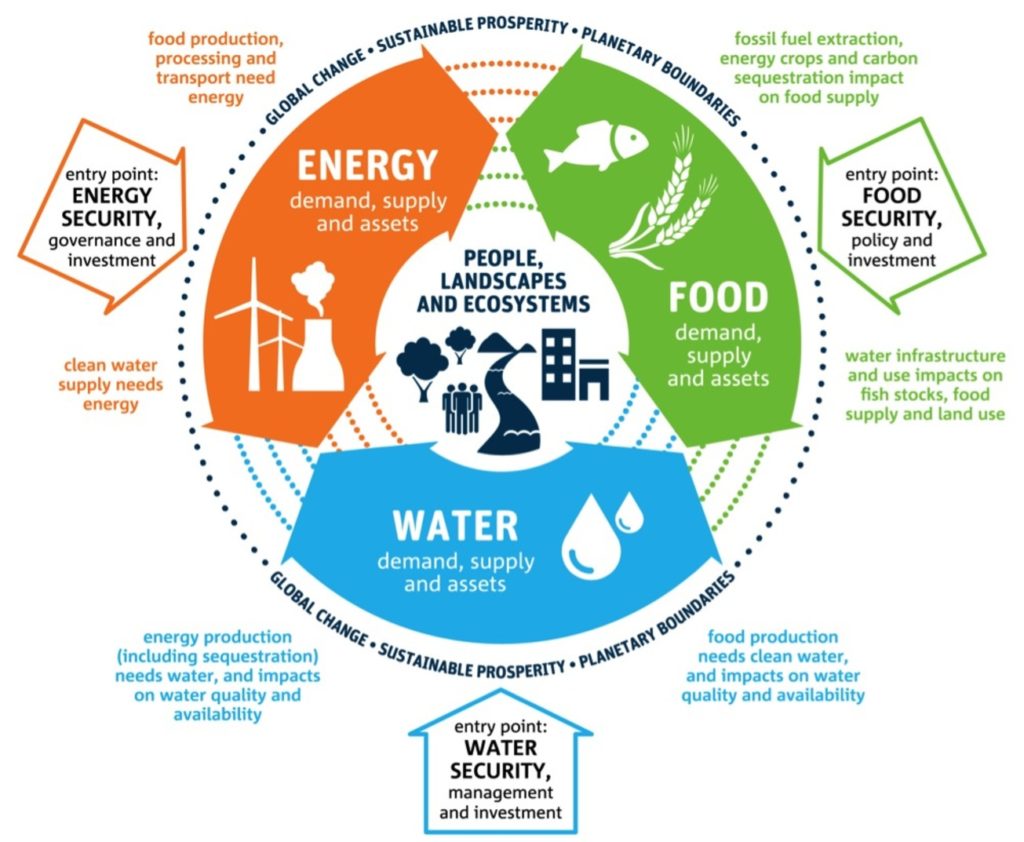 The National Outlook focuses on the intersection of water, energy and food.

While our major focus is on Australia, at the national scale, we also model what might happen globally, and at more detailed state and local scales within Australia.

We find economic growth and environmental impacts can be decoupled − in the right circumstances. National income per person increases by 12-15% per decade from now to 2050, while the value of economic activity almost triples.

In stark contrast to income, which rises across all scenarios, environmental performance varies widely. Key environmental indicators such as greenhouse gas emissions, water stress, and native habitat and biodiversity are projected to more than double, stabilise, or fall across different scenarios to 2050.

As shown in the chart below, we find that energy rises in all scenarios, but that greenhouse emissions can fall at the same time – with the right choices and technologies. Water use can also rise without increasing extractions from already stressed catchments. Food output (here indicated by protein) can increase, while native habitat is restored. 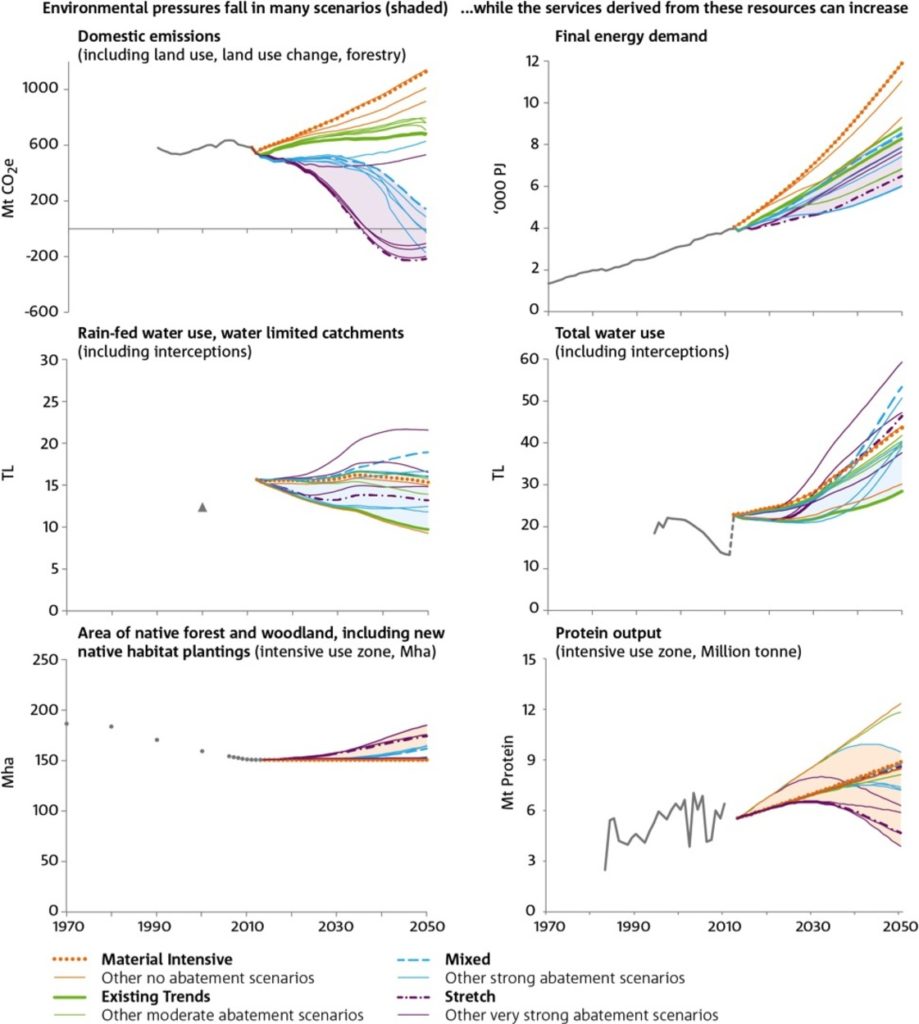 Many of the 20 scenarios explored would represent substantial progress towards sustainable prosperity.

Indeed, we find that Australia could begin to repair past damage: restoring significant areas of native habitat and achieving negative emissions (net sequestration) of greenhouse gasses.

We use the normal definition of economic growth as measured by increase in Gross Domestic Product (GDP) – the value of goods and services produced in an economy – consistent with the national accounts framework.

Some authors use a different definition, most notably Herman Daly a leading advocate for a steady state economy. Daly defines growth as an increase in physical economic scale, such as resource extraction, and goes on to argue that indefinite (material) economic growth is not possible.

While this may be true, for his definition, it can be confusing for people that do not realise he is not referring to GDP growth. Indeed, Daly recently acknowledged that economic (GDP) growth is possible with finite resources and steady material throughput.

These definitions matter: we project growth (GDP – measured in real dollars, adjusted for inflation) increases by more than 160% in scenarios where domestic material extractions and throughput (measured in tonnes) decreases by around 40%.

But here is the real crunch: we find these substantial steps toward sustainability could build on policy approaches that are already in place in Australia or other countries. This implies Australia could make enormous progress towards a more sustainable future without a major change in what we value.

We can be confident that a values shift is not required to achieve these outcomes – at least before 2050 – because none of the scenarios we modelled assume change in values or a new social or environmental ethic.

Instead, we show that people will make choices to change their behaviour to make the best of particular policy settings. These choices shape production and consumption.

For instance, we consider increasing Australia’s climate effort in line with other countries would be consistent with Australian public opinion and assessments of Australia’s national interest in limiting the rise in average global temperature to 2°C. So we do not interpret this as implying a change in values.

We find collective choices explain around 50-90% of differences in environmental performance and resource use across the scenarios we model. Consistent with the institutional reform approach, we find top-down collective choices are particularly important in shaping “public good” outcomes – accounting for at least 83% of the difference between scenarios for greenhouse gas emissions.

Bottom-up individual choices play a greater role when private and public benefits are aligned. For instance individual choices account for up to half of the difference between scenarios for energy use (33–47%) and non-agricultural water consumption (16–53%).

Sustainable prosperity is possible, but not predestined. Australia is free to choose.

Previous post:
Infinity: swinging into a conversation about energy
Coming up next:
Smart, energy efficient home design gets AccuRate