The Retro Slider – the best-named reptile in Australia?

Lerista is a genus of skinks commonly known as “sliders”. It contains over 90 species of mostly small, burrowing skinks with reduced limbs – limbs that are short, often with fewer than five fingers or toes, or are missing altogether. The Retro slider (Lerista allanae), has tiny back legs and no front legs. It grows to about 15 cm, nearly half of this being tail. It is grey to silver or pale brown, and each scale has a dark spot or streak on it. It is named after Retro Station, a grazing property where it was originally collected.

The Retro Slider is one such species, inhabiting slight rises in a landscape of fertile, deeply cracking clay soils near Clermont in central Queensland’s Brigalow Belt. They are known from four locations over a 40 km range, and the area they occupy is unknown, but possibly as small as a few square kilometres. The main stronghold is Retro Station, a lightly grazed property with, importantly, patches of trees with deep, undisturbed leaf litter. Retro sliders also occur along road verges.

Originally known from two or three locations the Retro slider was missing for 49 years until rediscovered near one of the original sites in 2009. It is listed as endangered on a state and national level, and critically endangered under the IUCN.

It’s important to consider the past to help understand the Retro slider’s predicament.

The area was heavily grazed by sheep before cattle rose to prominence. The use of agricultural chemicals, including insecticides has been widespread at times and this may have had consequences for termites and small invertebrates, which the Retro slider eats.

The effects of widespread drought and flooding are unknown but likely to be detrimental to Retro sliders. Drought because it reduces ground cover and therefore may increase exposure to predators and extreme temperatures; and floods because they may force skinks to the soil surface, again exposing them to danger.

Fire may impact on Retro sliders by burning leaf litter, habitat for their prey and also exposing the sliders to the dangers mentioned above. 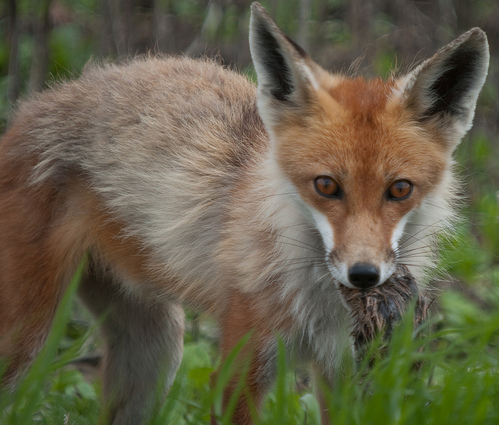 Exotic grasses, especially buffel grass, can come to dominate the habitat where Retro sliders live. The effects of buffel invasion are not known, but Retro sliders have not been found under buffel clumps, despite extensive searching. Like gamba grass in northern Australia, a worrying aspect of buffel is that it favours burning, which can kill the small stands of trees and shrubs that Retro sliders use.

Feral animals, especially foxes and cats may impact Retro sliders. Both have been seen eating other slider species. Foxes and cats are likely to amplify other threats. Sliders exposed at road edges, or due to fire and flood, are easy prey for predators.

There is no current formal coordinated management strategy in place for Retro sliders. The Retro slider is not known to occur within the protected estate, so management on private land and road reserves will be imperative for its long term survival.

The landholder of the property where most sliders have been found is proud to have a critically endangered species under his stewardship and is committed to helping to minimise threats.

The Commonwealth has drafted a Recovery Plan for the Brigalow Belt Reptiles that lists the Retro slider and eight other reptile species. WWF and the Queensland Murray-Darling Committee have also drafted a management plan including seven additional species from the Brigalow Belt.

Queensland Transport is cooperating with the Queensland Department of Science, Information Technology, Innovation and the Arts to protect or enhance Retro slider habitat where it occurs on road verges. Fire and buffel grass management are important components of this. Areas where the Retro slider have been found on road verges have been carefully mapped so that the impact of road management or upgrade activities are minimised.

Given the skink’s small size, enhancing existing habitat should not prove difficult. Establishing one or two additional habitats away from the current sites would be beneficial in guarding against localised events such as flooding or fire. A bonus would be to find one or more populations on the protected estate.

For many years the Retro slider had the dubious distinction of being Australia’s only reptile thought to be extinct. Its rediscovery and the fact that it has been found in a growing number of sites in the last three years give hope for a secure future.

The Conversation is running a series on Australian endangered species. See it here

Previous post:
Take a bow… block 201 is lifted into place!
Coming up next:
The mother of all innovations