Ants, bees and wasps: the venomous Australians with a sting in their tails

Ants, bees and wasps: the venomous Australians with a sting in their tails

Wasps, bees and ants have been awarded the the prize for the most painful (and sometimes deadly stings) in the insect kingdom

The prize for the most painful and sometimes deadly (more on that later) stings in the insect kingdom goes to … wasps, bees and ants.

There are many insects that bite, such as beetles and dragonflies, or suck your blood with long hypodermic mouthparts (mosquitoes, for instance, and sandflies). But none of these are deadly in themselves.

Mosquitoes do transmit deadly diseases, such as malaria and dengue. But it’s not the mosquito bite as such that kills; it’s the tiny parasitic microorganism that the mosquito transmits.

It’s really bees, wasps and ants – a group known as Hymenoptera – that can claim the title of deadliest insects. How did they evolve to be so painful? 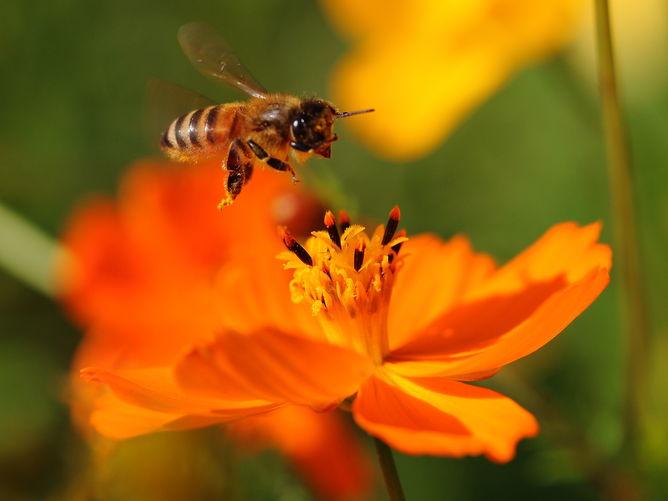 A worker bee landing on a flower

A worker bee can sting a person only once. Image Credit – 吉輝 温, Flickr

Many wasps are parasitic and developed long pointy hypodermic needles (or ovipositors) to inject their eggs into their hosts. Over evolutionary time, some of these parasitic wasps changed their lifestyle and became predatory. Some even went on to feed on pollen and nectar (bees).

What happened to the ovipositor when wasps no longer needed to inject eggs? It became a pointy sting, a device for subduing prey with venom, as well as laying eggs.

It’s important to remember that only female wasps, bees and ants can sting; males don’t have the right apparatus.

Many of these stinging wasps, bees and ants have also become highly social insects. This means they live in large colonies such as honeybee hives, or ant nests. In these colonies, generally only a pair (a queen and a male drone, in the case of honeybees) or a few individuals reproduce.

All the rest are genetically and anatomically sterile females, and they do all the work inside and outside the hive or nest. These workers no longer need an ovipositor to lay eggs and it has become their primary weapon of choice, solely devoted to defence of the nest.

Workers use the sting to defend the wasp or bee nest, or ant colony. Queen bees lay eggs with their ovipositor and can also sting, but are usually tucked away in the nest far from harm.

Worker bees can sting humans only once – their barbed sting lodges in our skin and doesn’t retract, so the entire sting and the poison gland breaks free from the bee when it stings. The worker bee dies soon after and releases alarm pheromone, which alerts other workers that the nest is under threat. 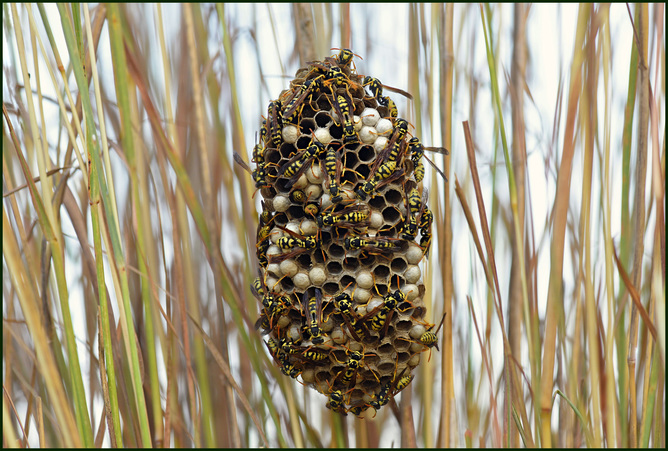 A very good way of provoking a large number of European (or any other) wasps is to disturb their nest. Image credit – Ziva & Amir, Flickr

More bees sting and release more alarm pheromones, attracting more alarmed bees … you get the picture. If you’re stung, remove the sting as soon as possible – this minimises the amount of venom injected.

A very small number of people (about one or two in every 100) can become hypersensitive after a bee sting. They become allergic to the venom, and their reaction becomes stronger when stung in future.

A highly allergic person may suffer anaphylactic shock from the sting, which can be life-threatening and requires medical treatment. A self-injecting EpiPen containing adrenalin is used to treat anaphylactic shock.

Another common introduced stinger in Australia is the European wasp, Vespula germanica. This wasp’s sting doesn’t get stuck in our skin, so they can inflict multiple stings when annoyed or provoked. A very good way of provoking a large number of European (or any other) wasps is to disturb their nest – never do this.

A very small percentage of people can also develop an allergic reaction to European wasp stings, just like honeybee stings. In severe cases, this can cause anaphylactic shock.

Arizona entomologist Justin O. Schmidt developed the Schmidt Pain Index 30 years ago to rank the painfulness of wasp, bee and ant stings on a four-point scale. 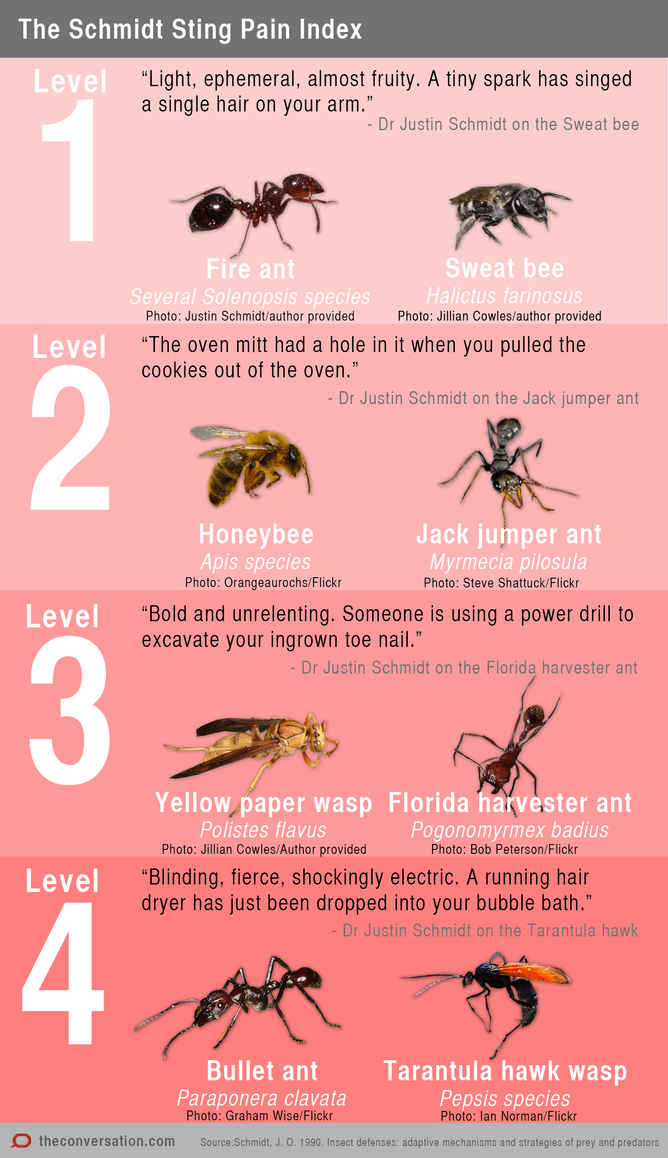 Zero on the Schmidt pain index is the feeling of an insect that can’t sting you, such as Australia’s native stingless bees. Two is the familiar pain of a honeybee. Four is reserved for just a few heavy hitters, such as a very large spider-killing wasp, or the infamous bullet ant (Paraponera clavata) of South America.

The notorious and excruciating pain of the bullet ant lasts for 24 hours. Schmidt has been stung by more than 100 insects to create his scale, and was awarded the 2015 Ig Nobel Biology Prize for his efforts.

Some of the most common painful stingers in the Australian bush are native bulldog ants of the genus Myrmecia. These are some of the largest ants in the world and combine a painful sting with an aggressive, take-no-prisoners attitude. On top of this, many species can jump. They rate up to three on the Schmidt Pain Index.

Bulldog or jack-jumper ants have impressive long, toothed and curved jaws, but it’s the sting at the end of their abdomen that does the damage.

My most painful memory as a boy was annoying a bulldog ant nest in the Sydney bushland with a stick. Eventually a huge worker bulldog ant crawled up out of sight underneath my stick and gave me a sting on the thumb I thoroughly deserved – and will never forget.

Previous post:
RV Investigator’s tales from the sea: week one
Coming up next:
So how do you refuel a ship like Investigator?