Amazing sights in the Southern Ocean

Amazing sights in the Southern Ocean

Around and around the Islands 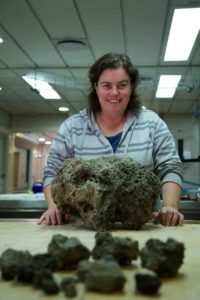 Woman standing behind large piece of rock resting on table

Pumice recovered from the seafloor near the McDonald Islands, with University of Tasmania PhD student Jodi Fox. Credit: Pete Harmsen

We spent most of this week circumnavigating the McDonald Islands and Heard Island, with some stops for over-the-side work when the conditions were favourable.

Our search for hydrothermal systems on the seafloor continues. Acoustic data continue to show candidate systems in the form of jet-like anomalies ascending from the seafloor through the water column for tens of meters, yet so far we’ve not been able to confirm such systems, either visually using the deep-tow camera or by other means. We will carry on with our efforts.

We’ve recovered volcanic rock and sediment from the seafloor around the McDonald Islands by dredging and grab sampling.  A dredge yielded significant pumice, a light-coloured and extremely porous volcanic rock that forms during an explosive eruption when a gas-rich froth of magma solidifies rapidly.

The BIG highlight was Big Ben

The ten geoscientists aboard RV Investigator, and for that matter the other 50 folks aboard the ship, had been keen to see Big Ben, the volcanic massif that dominates Heard Island, and its highest elevation, Mawson Peak – 2,745 meters above sea level – and we weren’t disappointed.

The clouds lifted and the sun shone for several viewing opportunities on different days, and the ship’s bridge and decks were crowded with sightseers during these times. 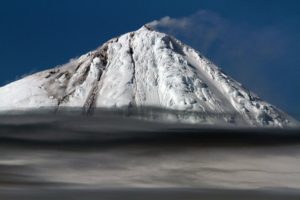 Mawson Peak on Big Ben, Heard Island, from RV Investigator on 31 January 2016. Lava is flowing down the left side of the mountain over a glacier, producing steam. Credit: Pete Harmsen.

Mawson Peak was erupting whenever we could see it during the week, the first ground/sea observation of volcanic activity on Heard Island since 2007. Ships seldom visit Heard and McDonald islands, and persistent cloud cover means that satellites can image Big Ben only infrequently. In addition to vapour emanating from the summit, we saw lava flowing from Mawson Peak down the flank of Big Ben on top of a glacier, quite a rare sight.

Groundhog Day (Feb 2) marked the conclusion of this week, and in some ways yet another circumnavigation of these islands is reminiscent of the film by that name. However we’re constantly acquiring new and stimulating data, and the remarkable landscapes, seascapes, and weather change by the minute, so going around the islands in polygons always remains fresh!

Some of our tools… 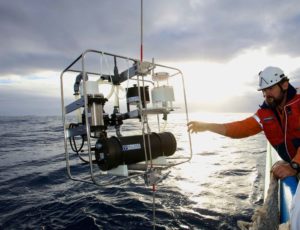 In situ pump being lowered next to ship in ocean. 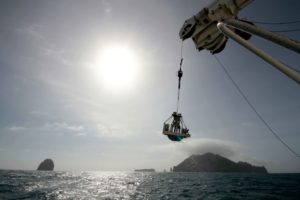 Equipment being suspended by crane above water with islands in background

In situ pumps collect suspended and dissolved particulate samples from a designated depth beneath the sea surface. On this voyage, we are particularly interested in iron and its origin – from hydrothermal, glacial, erosional, or other processes. We have deployed the pumps at various distances from plumes emanating from the seafloor that we’ve imaged acoustically, as well as at reference stations well away from the islands.

And we’re still not sick of watching Big Ben

Witnessing an ongoing eruption of Big Ben whenever Mawson Peak was visible has been an unanticipated highlight of working around these islands, and we’ve also observed vapor emanating from parts of McDonald Island. Several fumaroles, vents from which volcanic gas escapes into the atmosphere, are visible on the flanks of McDonald Island, indicating continuing magmatism there. 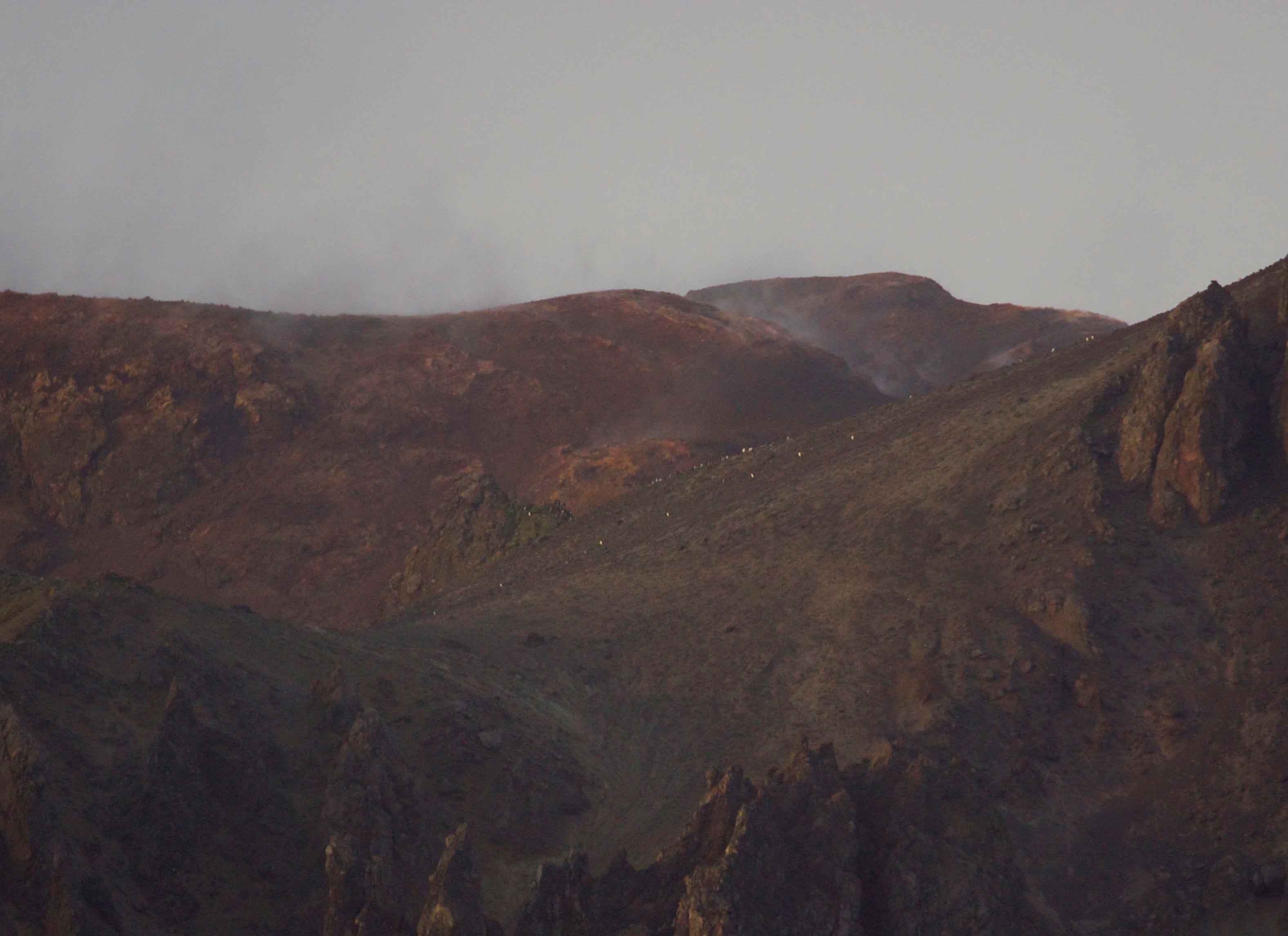 Volcanic gas escaping from side of mountain

Fumaroles (centre of image) on the south side of McDonald Island, 6 February 2016. White objects along the slope descending from right to left are penguins. Credit: Pete Harmsen.

We finally made it to “hump day”

On Friday 5 February we celebrated Hump Day, as in over-the-hump – the mid-point of the voyage. We’d been at sea 29 days, with 29 to go. More than a few of the shipboard complement have told me that bidding adieu to Heard Island and McDonald Islands will be tinged with sadness. Despite their inhospitable appearance, they are majestic and resplendent in their own ways and have become familiar companions. We feel extremely fortunate to have seen these rarely observed and even more rarely visited World Heritage-listed islands from all angles at sea level in a broad range of light and weather conditions.

Due to some late changes in the voyage schedule this year there are now opportunities available for ‘piggyback’ proposals for time aboard one of the newly announced voyages. Read the MNF Steering Committee Communiqué for all the details.

Previous post:
Fires are increasing in a warming world, but a new model could help us predict them
Coming up next:
Don’t panic – we’ve found gravitational waves