Aust in Space: how our additive manufacturing technology helped with a recent satellite launch

Aust in Space: how our additive manufacturing technology helped with a recent satellite launch

Our additive manufacturing technology helped a recent satellite launch! See how we developed a small part to fix a big problem. 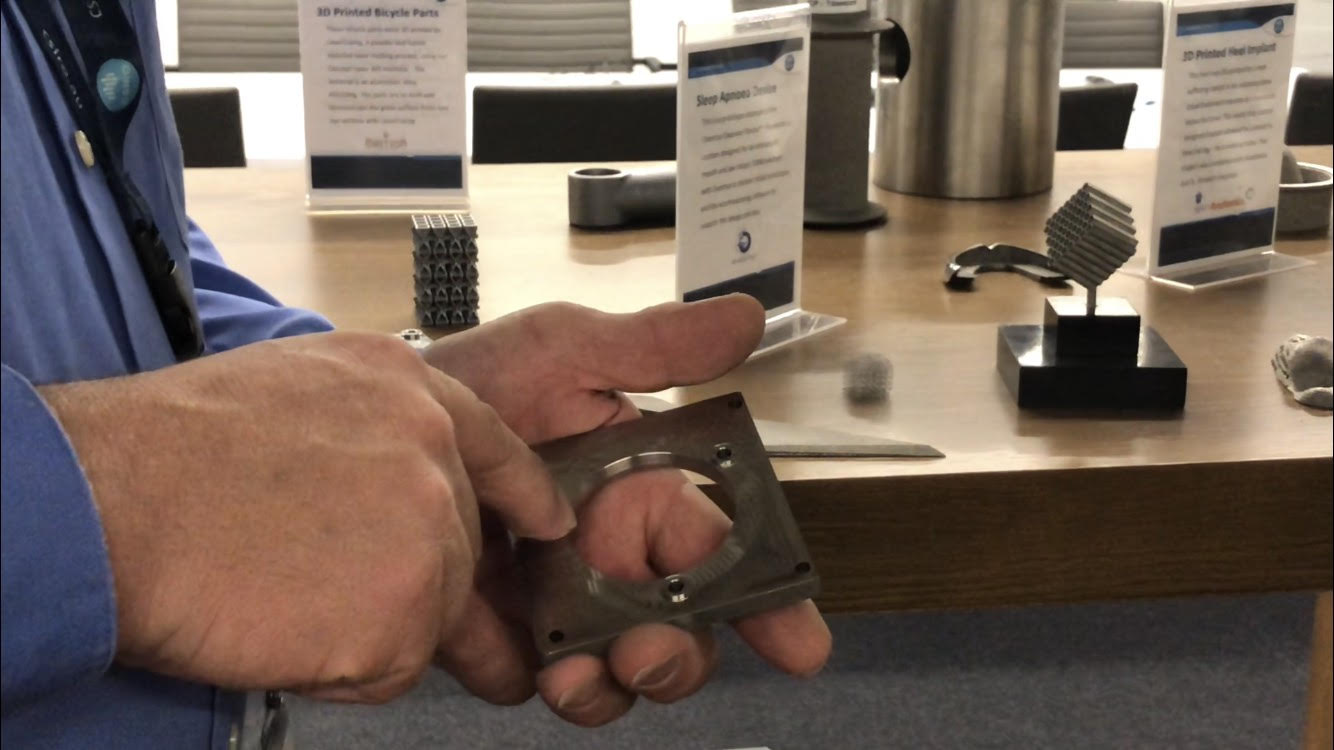 The CubeSat part made using two different additive manufacturing processes. The first was electron beam 3D printing for the light weight, super strong titanium base. And the second was cold spray for the thermally stable invar coating.

Right now, there are about 2600 operational satellites orbiting our planet. Most of these are in low Earth orbit (LEO) and a growing number are CubeSats (tiny satellites). CubeSats are about the size of one or two loaves of bread and can be used for a range of applications. One example is monitoring changes in the natural and built environment like floods, groundcover changes and urban development. Another is providing communications services including Internet of Things connectivity.

CubeSats are making space more accessible thanks to their smaller size and lower cost compared to traditional satellites. But there are a few challenges.

The harsh environment of space means these satellites are subject to extreme conditions and temperature variations. As the orbiting spacecraft moves in and out of sunlight and shadow, it experiences thermal cycling. That means it jumps from extreme cold to extreme heat, over and over again. Additionally, when CubeSats are in sunlight, thermal gradients across the satellite body are particularly pronounced due to the CubeSat’s small size. As a result, these temperature changes can affect the stability of the satellite structure. This makes keeping sensitive equipment, such as meticulously calibrated optics that must stay well aligned, very difficult.

Launching a satellite into space is a significant investment and can involve years of planning. So it’s important that satellites, and the equipment they carry, can comfortably withstand the environmental challenges of space. This lets them get on with the job they’ve been launched to do.

The good news is we’ve developed a great solution!

They go up so fast

Last month, Rocket Lab, launched the M2 mission from New Zealand’s Māhia Peninsula as part of the “They Go Up So Fast” mission. This mission will help monitor maritime areas and demonstrate different sensors, communication systems and onboard processing platforms.

Developed by UNSW Canberra Space and supported by funding from the Royal Australian Air Force, M2 is arguably one of the world’s most complex CubeSat missions to date. This is because it involves some tricky formation flying. CubeSats are designed based on a modular standard unit of 10cm x 10cm x 10cm. The M2 mission consists of two connected six-unit CubeSats. Early in the mission they will undergo a controlled separation and fly in sequence to test a range of emerging technologies.

Our part in the mission

On-board the CubeSat are components built in our Lab22 and supported by our Space Technology Future Science Platform.

If you’re a regular reader of our blogs, you’ll know this is not the first time Lab22 has worked on parts destined for space. This time our team – Dr Darren Fraser and Andrew Urban – was called on to make an optical bench for a telescopic mount. This important component, which looks like a flat, square metal plate, about 8cm x 8cm, holds part of the CubeSat’s imaging optics payload. Essentially, it makes sure these structures remain stable under extreme conditions. This is important if the mission is to succeed and collect the required data.

Working with partners from DMTC, UNSW Canberra Space, La Trobe University and AW Bell, we explored the best methods and materials for the satellite components.

We sought out material compounds that were able to remain stable under thermal cycling. A titanium/invar hybrid part was designed and selected for additive manufacturing – titanium for its strength and lightness and invar for its thermal properties.

Our Lab22 team combined two additive manufacturing techniques to make the components – 3D printing and cold spray. This enabled them to fast track the production of the parts. But more importantly, the additive methods and hybrid alloys used allowed the team to produce parts that could withstand the extreme conditions of space. This, in turn, helped minimise the effect of thermal cycling on the performance of the satellite optics. 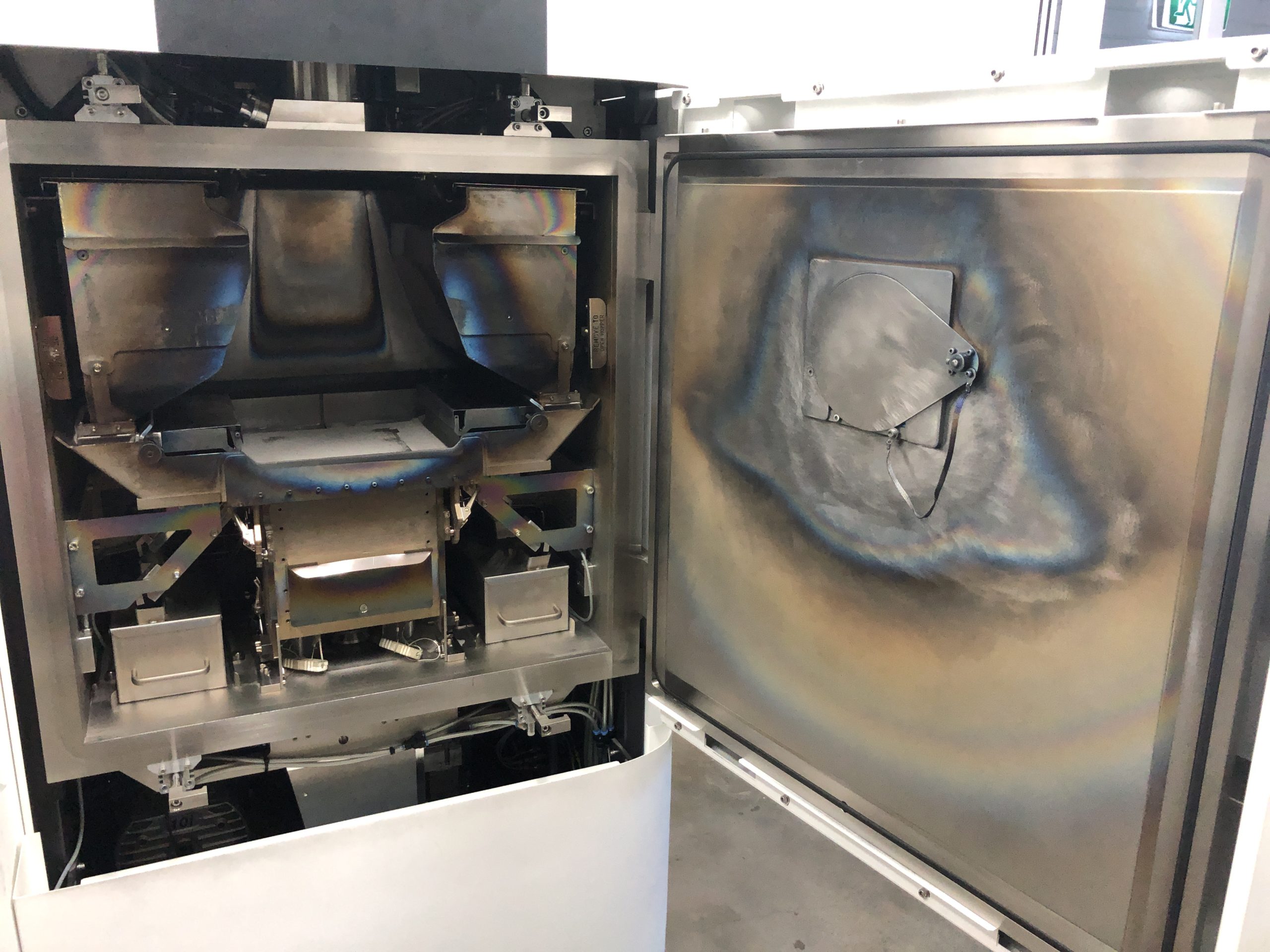 Inside the ARCAM 3D printer. This machine uses an electron beam to melt or fuse together metallic particles in a powder bed. It prints the initial titanium of the hybrid M2 CubeSat component. A layer of invar coats the part by using cold spray.

Here’s how it worked

For the first part of the process, Darren used the electron beam 3D printer which employs an electron beam to melt or fuse together neighbouring particles in a metal powder bed.

Andrew then used cold spray for the second step. Cold spray uses a supersonic gas jet to accelerate metal particles towards a surface, faster than the speed of sound. The cold spray robots deposited a coating of invar onto 3D printed titanium Just enough so that it didn’t impact the part’s weight too significantly, but did provide a stabilising layer. This made the part resistant to stresses and expansion in fluctuating temperatures. The deposited invar particles created a bond between the two materials.

Each of the two processes lends itself to different applications and alloys. Some alloys, for example, will change their properties when heated to melting point. In those cases, cold spray is a better option because it doesn’t rely on that level of heat.

To ensure the manufactured parts were up to the job, UNSW Canberra conducted extensive metrology (weights and measures) and vibration testing to mimic launch conditions.

Would these components survive the intense vibrations during launch? Would they withstand the extreme and fluctuating temperatures and environment of space? Was there a chance they might outgas in the vacuum of space? The researchers asked these questions as they designed, built and tested these important CubeSat parts.

And how did they go? Well, watch the launch and see for yourself. Fast-forward to 18 minutes in for take-off!

We are proud to have played a role in the M2 mission and to be supporting Australia’s sovereign capability to additively manufacture space components.

See what else Lab22 can do