Astronomers thought giant galaxies were formed by lots of little galaxies coming together - like rugby players in a scrum. The galaxies would be getting hot and sweaty, grunting a bit, and there’d be general mayhem. We've found there’s a scrum going on, but it’s happening in a pool of stuff – like underwater rugby. 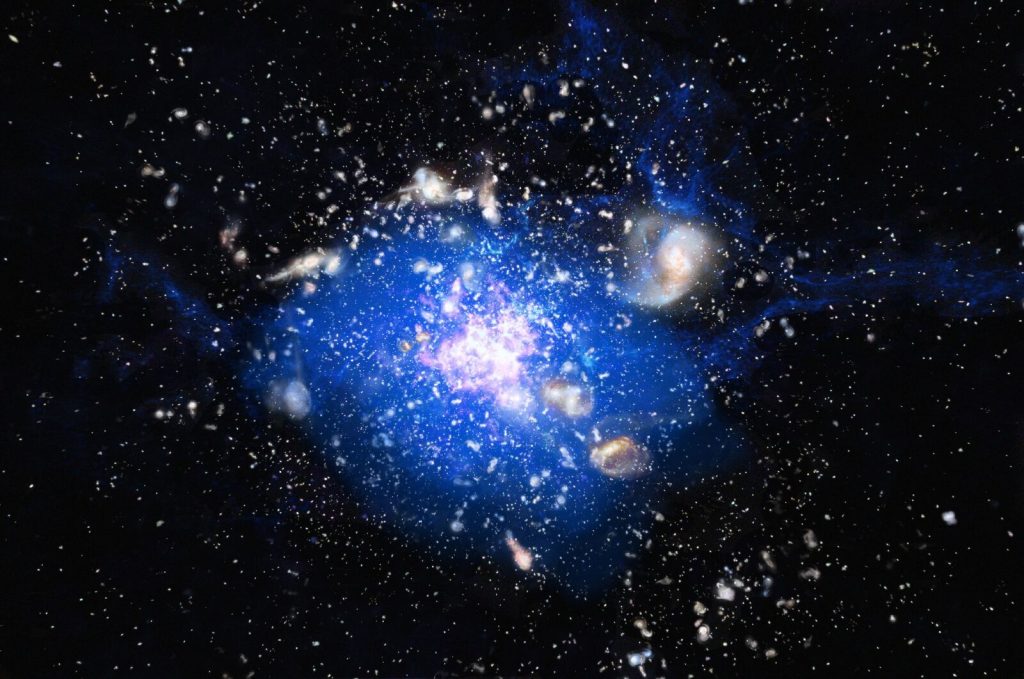 Bright white blobs scattered over a black background with a bright blue and pink cloud at the centre.

An artist’s impression of the Spiderweb galaxy sitting in a cloud of cold gas (blue). Modified from ESO Science Release 1431. Credit: ESO/M. Kornmesser. This figure is licensed under CC BY 4.0 International License (https://creativecommons.org/licenses/by/4.0/)

‘Underwater rugby’ may kickstart some galaxies, one of our telescopes has shown.

The largest galaxies in the universe are big red whoppers. They hang out in the middle of crowds of hundreds or thousands of galaxies. 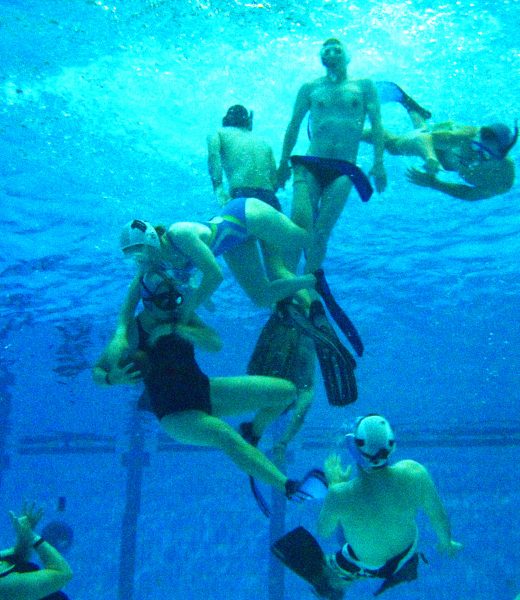 A view from underwater of seven people in a swimming pool playing a game of underwater rugby.

Until now, astronomers thought these giant galaxies were formed by lots of little galaxies coming together – like rugby players in a scrum.

The galaxies would be getting hot and sweaty, grunting a bit, and there’d be general mayhem.

But our Compact Array telescope has changed that picture.

It now looks like there’s a scrum going on, but it’s happening in a pool of stuff – like underwater rugby.

An international team has pointed the Compact Array, and the Very Large Array telescope in the USA, at a ‘protocluster’ – the early stage of a big crowd or cluster of galaxies.

At the heart of this protocluster is a bunch of small galaxies coming together to form a big one, nicknamed the Spiderweb.

Surprisingly, it seems that the Spiderweb is sitting in great big pool or cloud of gas – so much it would weigh 40 times the entire galaxy we live in, the Milky Way.

And the gas is extraordinarily cold, about –200°C.

This gas is the raw material for making stars. Indeed, we already knew that young stars are lighting up all across the protocluster, where the gas has now been found.

It looks like the Spiderweb might be condensing out of the cold gas rather than being born in fiery collisions.

Maybe all today’s giant galaxies had a cold start, not a hot one.

This super-cool finding was published today in the journal Science.

Previous post:
From warm to swarm: why insect activity increases in summer
Coming up next:
A Brave New Summer: Our Facebook fans cook up some Aussie inventions