A new study shows an animal’s lifespan is written in the DNA. For humans, it’s 38 years

A new study shows an animal’s lifespan is written in the DNA. For humans, it’s 38 years

Knowing an animal's normal lifespan is hugely important for conservation efforts, but it's harder to find out than you'd think.

Humans have a “natural” lifespan of around 38 years, according to a new method we have developed for estimating the lifespans of different species by analysing their DNA.

Extrapolating from genetic studies of species with known lifespans, we found that the extinct woolly mammoth probably lived around 60 years and bowhead whales can expect to enjoy more than two and a half centuries of life.

Our research, published today in Scientific Reports, looked at how DNA changes as an animal ages – and found that it varies from species to species and is related to how long the animal is likely to live.

The mystery of ageing

The ageing process is very important in biomedical and ecological research. As animals grow older, they experience a decline of biological functions, which limits their lifespan. Until now it has been difficult to determine how many years an animal can live.

DNA is the blueprint of living organisms and it is an obvious place to seek insights into ageing and lifespan. However, no-one has been able to find differences in DNA sequences that account for differences in lifespans.

Lifespans among vertebrates varies greatly. The pygmy goby (Eviota sigillata) is a small fish that lives only eight weeks, whereas individual Greenland sharks (Somniosus microcephalus) have been found that lived for more than 400 years.

Knowing the lifespan of wild animals is fundamental for wildlife management and conservation. For endangered species, lifespan can be used to understand what populations are viable. In industries such as fisheries, lifespan is used in population models to determine catch limits.

However, the lifespan of most animals is unknown. Most estimates come from a small number of individuals living in captivity whose ages at death were known. For long-lived species it is difficult to obtain a lifespan as they may outlive a generation of researchers.

Over the past few years researchers have developed DNA “clocks” that can determine how old an animal is using a special type of change in the DNA called DNA methylation.

DNA methylation does not change the underlying sequence of a gene but controls whether it is active. Other researchers have shown that DNA methylation in specific genes is associated with the maximum lifespan of some mammals such as primates.

Despite DNA methylation being linked to ageing and lifespan, no research until now has used it as a method to estimate the lifespan of animals.

In our research, we have used 252 genomes (full DNA sequences) of vertebrate species that other researchers have assembled and made publicly available in an online database. We then compared these genomes to another database of known animal lifespans. 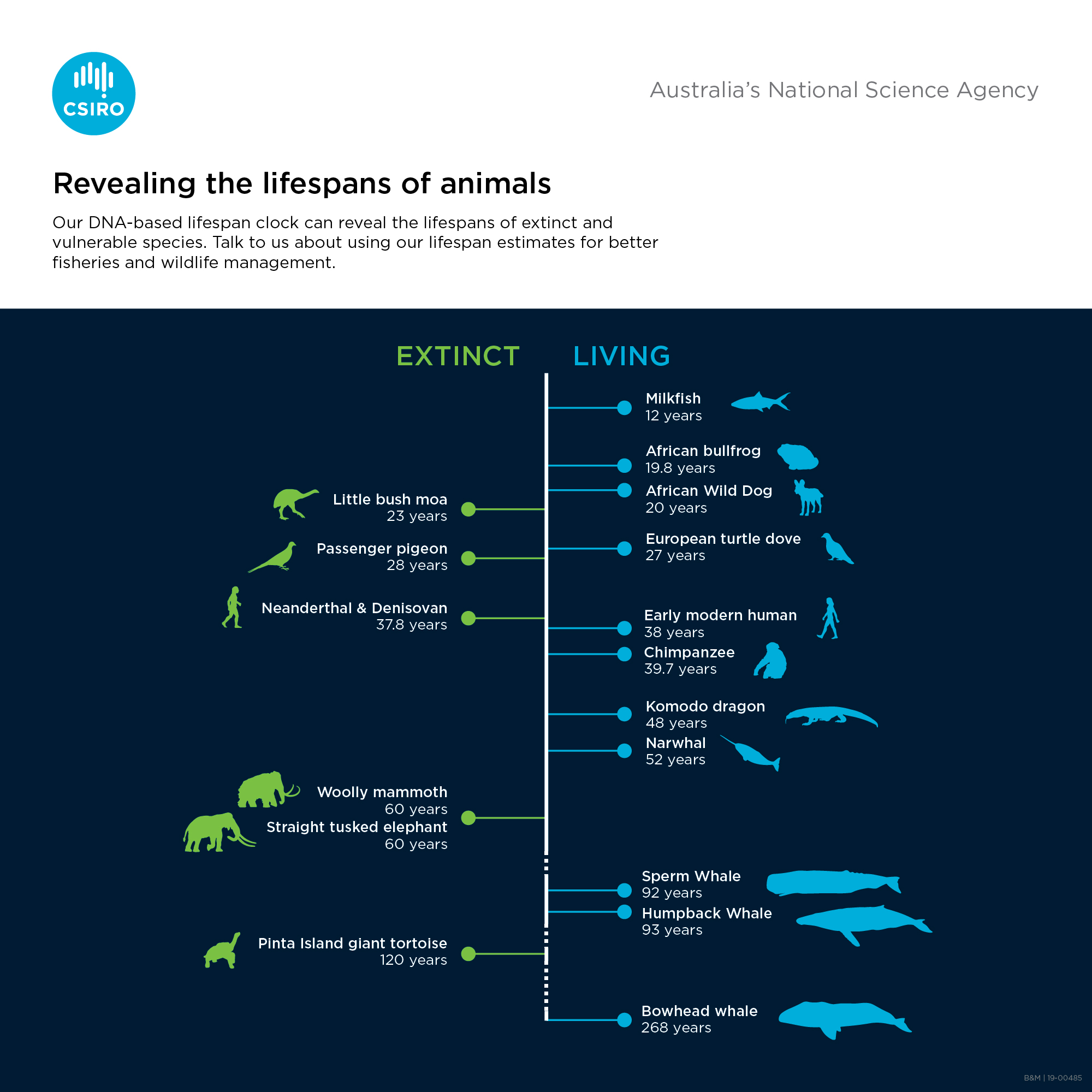 We found the lifespan of the bowhead whale, thought to be the world’s longest lived mammal, is 268 years. This estimate is 57 years higher than the oldest individual that has been found, so they may have a much longer lifespan than previously thought.

We also found the extinct woolly mammoth had a lifespan of 60 years, similar to the 65-year span of the modern-day African elephant.

The extinct Pinta Island giant tortoise had a lifespan of 120 years by our estimate. The last member of this species, Lonesome George, died in 2012 at age 112.

Interestingly, we found Neanderthals and Denisovans, which are extinct species closely related to modern humans, had a maximum lifespan of 37.8 years.

Based on DNA, we also estimated a “natural” lifespan modern humans of 38 years. This matches some anthropological estimates for early modern humans. However, humans today may be an exception to this study as advances in medicine and lifestyle have extended the average lifespan.

As more scientists assemble the genomes of other animals, our method means their lifespans can readily be estimated. This has huge ecological and conservation significance for many species which require better wildlife management.

Previous post:
Ocean songs: Music you can float to
Coming up next:
Extinguishing bushfire myths and misconceptions