Good news, entomologists! Tiny insects, such as this Australian weevil, can be scanned and viewed in full colour and 3D from anywhere in the world. Image: John Tann/Flickr, CC BY

Observation is a cornerstone of science – we learn much about the universe and how it works just by looking at it. But observation can be a huge challenge. It’s easy to forget that human eyes allow us to see only the tiniest fraction of the universe in all its complexity: we can’t see things that are too big or too small, we can’t see inside most objects and we can’t observe events that happen too fast or too slow.

But in a paper published in PLOS ONE in April we demonstrated a new way for researchers to easily see the tiniest details on the tiniest insects in full colour, 3D and high-definition – even if those insects are on the other side of the world.

Even better, our technique doesn’t cost an arm and a leg. But first, we’ll explain why such imaging techniques are important.

Seeing nature in all its glory

Imaging the natural world has advanced in leaps and bounds. Scientists and engineers build telescopes and microscopes, use time-lapse to make even glacial progress apparent and cameras fast enough to watch light move.

They even build systems that let us look inside solid objects or, in the case of 3D capture, view them from all angles.

But still there are challenges.

While X-ray computer tomography (CT) can reveal the interior and exterior of even the tiniest objects, it is as black and white as a Box Brownie: any colours appearing in CT scans have to be added artificially using software such as Drishti.

And, while there are 3D capture systems that can acquire the surface colour and texture of an object, they struggle with small, detailed specimens – precisely the sort of objects preserved and curated at the Australian National Insect Collection (ANIC).

This led us to explore and develop what we believe is the world’s first system for capturing 3D models of tiny (3-30mm) specimens in natural colour.

What’s more, as we outline in our PLOS ONE paper, the system was designed with budget-conscious collections, museums and researchers in mind; our working prototype used less than A$10,000 worth of off-the-shelf hardware and software (labour not included).

With this rig, designed and implemented by CSIRO postdoctoral researcher Chuong Nguyen, we’ve been able to bring a range of insects into the digital domain in glorious (perhaps, unsettling) full colour.

Let’s go back a step and ask: why bother collecting insects at all?

Despite what we like to think, the world would get along just fine without humans. But, as American biologist E O Wilson said:

if insects were to vanish, the environment would collapse into chaos.

We study insects so we can better understand the critical roles they play on this planet; ANIC preserves and curates insects for study, giving us a physical record of Australian biodiversity through time.

But physical specimens, though indispensable, have their limitations. Fragile, delicate, prone to decay and damage (sometimes from other insects), they are a challenge to share among researchers, let alone the general public. Often minuscule, they usually need to be seen under magnification, making their size and structure challenging to measure.

This is why we scan bugs: by bringing insects into the digital domain as high-resolution, natural colour 3D models, specimens can be more readily shared, analysed, annotated and compared.

Our system does this in three steps:

This approach has given us excellent 3D models of several specimens, each model around 10 megabytes in size, enabling them to be viewed in a modern web browser with no additional software. Given that some of these models involved around 17 gigabytes of photos to begin with, this is a pretty compact representation.

As well as helping to unlock scientific and educational value from Australia‘s national collections, natural-colour 3D digitisation of insects has a potential role in protecting Australia‘s environment, its multi-billion dollar agricultural industries and the health of its population, all of which could be seriously damaged by invasive insects and the diseases they carry.

Not only could quarantine officers carry a 3D gallery of invasive insects with them on inspections to help identify pests, any suspect specimens could be scanned in 3D and sent quickly to an expert entomologist for examination.

And while we wait for 3D printing to catch up to the colours, textures and detail we can now capture, there’s always titanium: 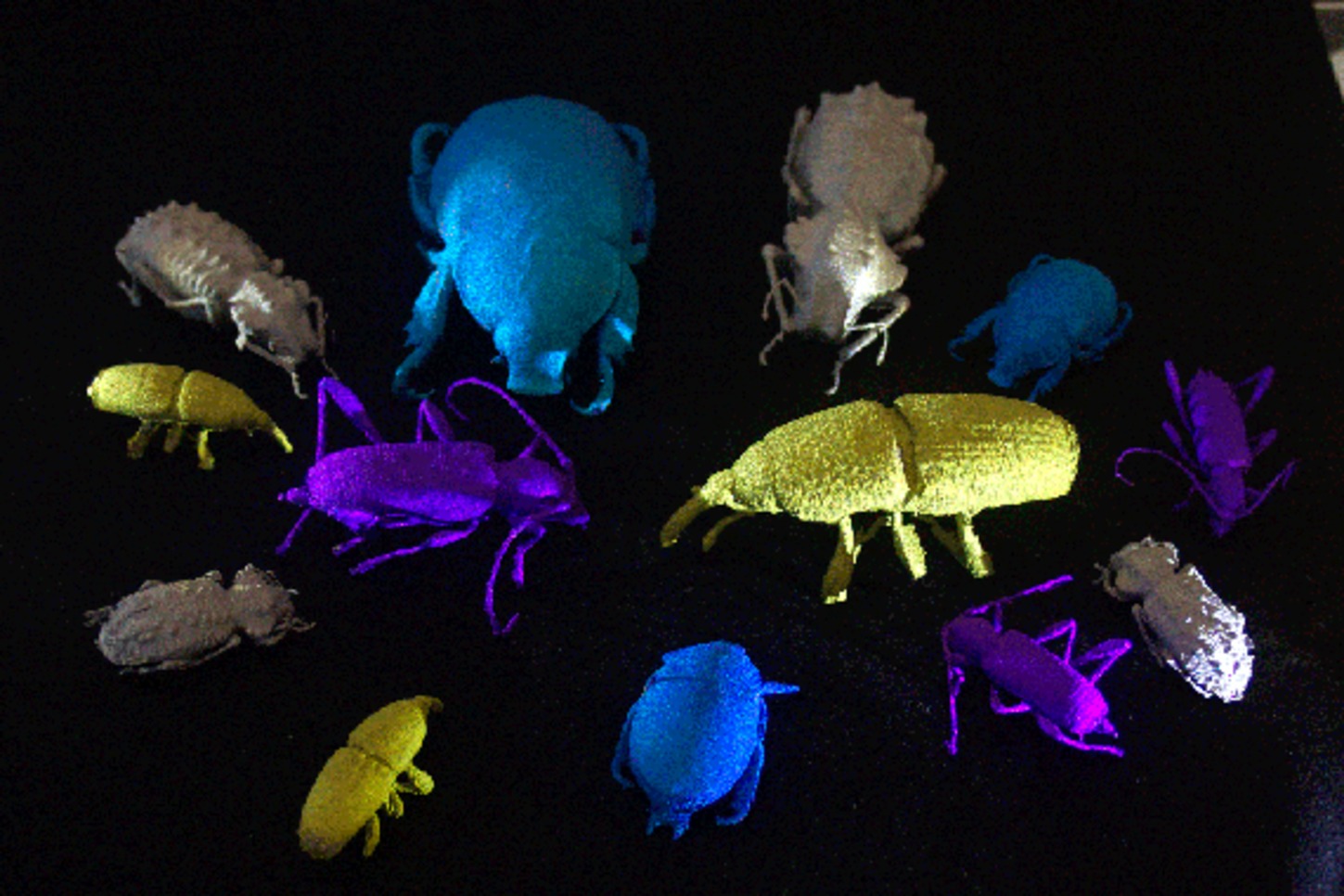 Combining image analysis tools with big data analytics will allow this to happen at unprecedented speed. Good news for museums and researchers the world over.

Previous post:
Explainer: Varroa mite, the tiny killer threatening Australia’s bees
Coming up next:
Top 5 gift ideas for the (Bat)man who has everything