What’s our role in the search for missing flight MH370?

What’s our role in the search for missing flight MH370?

Here's how our ocean modellers are helping in the search for missing Malaysian Airlines flight MH370. 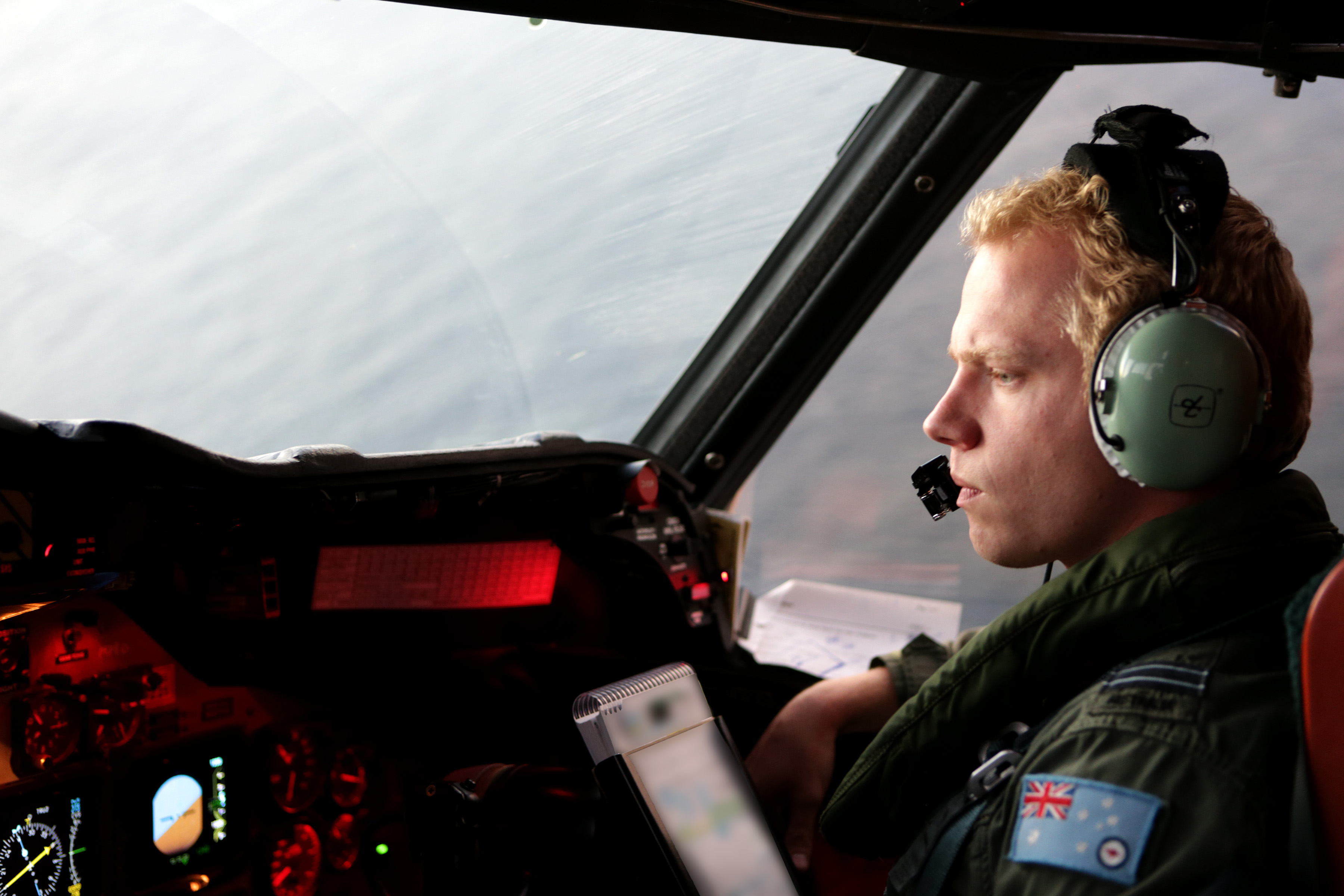 CSIRO continues to provide support to AMSA and the Joint Agency Coordination Centre (JACC) in the search for MH370 by way of oceanographic modelling and debris tracking. CSIRO is not involved in the underwater search for the missing black box. Any such media enquiries should be forwarded to the JACC media centre JACCmedia@infrastructure.gov.au

News across the world has been dominated by the tragic mystery surrounding the disappearance of Malaysia Airlines flight MH370 somewhere in the southern Indian Ocean.

Many people have been asking CSIRO for our take on the situation, the ocean, the technology being used to find the debris of the plane – so we wanted to let you know how our technology is being used and how we’re assisting the Australian Maritime Safety Authority (AMSA).

Why are we involved in the search?

CSIRO has a Memorandum of Understanding with AMSA that allows them, during a maritime incident, to call on us for scientific knowledge and technical support.

Incidents include oil spills, search and rescue, shipping accidents and in the case of MH370, modelling and projecting the track of debris spotted by satellites.

What are we doing?

To assist AMSA with the search we have created a task force of oceanographers, led by our own Dr David Griffin and Dr Andreas Schiller, to help with two main tasks:

To do this, we’re using a number of ocean models that all run routinely in real-time, as part of our existing ocean monitoring and modelling projects and collaborations. We’re focusing this current capability on the southern Indian Ocean.

How does the modelling work?

These models use data from the Global Ocean Observing System and Australia’s Integrated Marine Observation System (IMOS*). Three satellites (Jason-2, Cryosat-2 and SARAL) are particularly crucial to the work. The satellites are equipped with altimeters, which map ocean-surface topography, or the hills and valleys of the sea surface, with accuracy better than 5-centimetres. We also use data from several additional satellites which measure the temperature of the surface of the ocean as an additional source of information.

Ocean currents run along the slope of the sea surface like wind flows around high and low pressure systems in the atmosphere.

*IMOS is a national array of observing equipment (satellites, floats, moorings, radars, robotic gliders, etc) that monitor the open oceans and coastal marine environment around Australia.  We are one of ten national research institutions and universities that delivers the IMOS ocean portal, allowing anyone to view and download the latest data on our oceans.

How to read ocean models 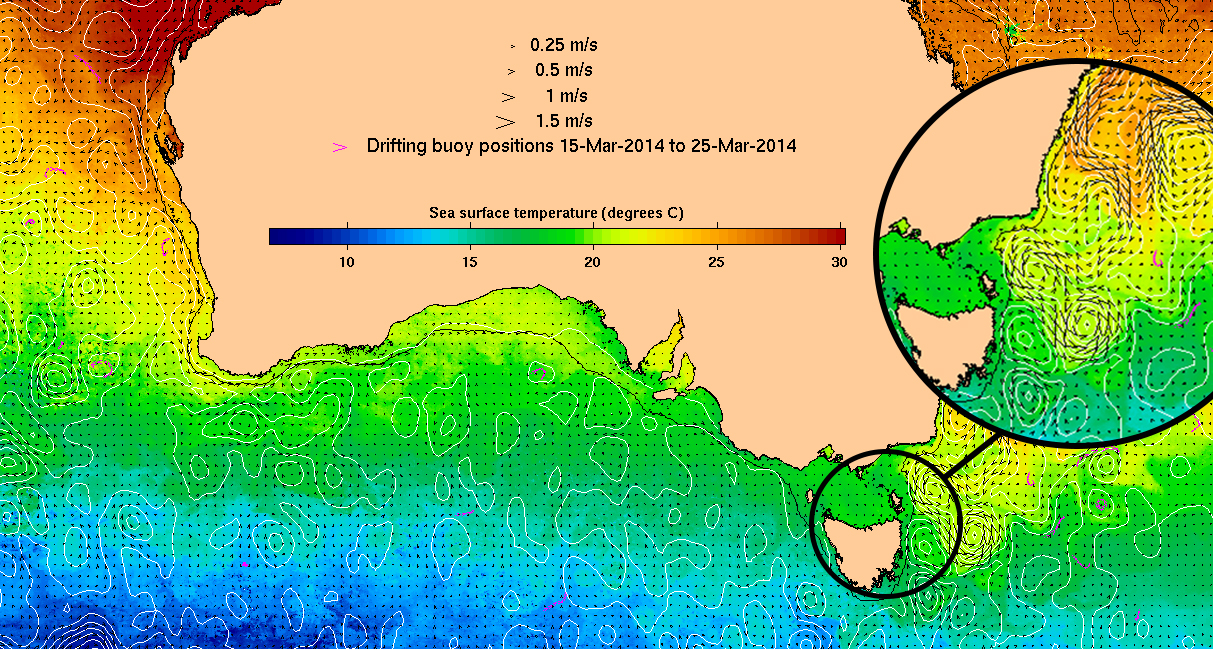 When we create a map of ocean conditions, like the one above displaying conditions on 24 March 2014, we can see the contours (the white lines in the diagram) of the ocean, or the sea level, which helps us to predict where items at the surface, for example debris, are drifting. The black arrow heads show the current direction and strength (bigger arrows mean the water is flowing faster) and eddies (swirling in the ocean) and the different colours shows the sea surface temperature (blue/green being colder, orange/yellow being warmer).

The map above is also giving us information from the Global Drifter Program (a network of satellite-tracked surface drifting buoys); you might be able to see the little magenta arrow heads showing us the buoy location and direction.

For more information on our ocean modelling and forecasting, see BLUElink, a collaboration between CSIRO’s Wealth from Oceans Flagship, the Bureau of Meteorology and the Royal Australian Navy.

The challenge we face

The ocean is vast and conditions are continuously changing. This area is known for strong winds, large waves and turbulent eddies. Debris can potentially travel up to 50 kilometres a day. We are tracking eddies in the Indian Ocean, around the area of the search, which are about 100 kilometres wide.  The water is moving around these at about 0.5 metres a second, or one knot.

The modelling and observations are not completely precise but they are a big help, for example, the video below demonstrates how debris would move across the ocean over a period of nine months (data covers March – November 2009).

For media enquiries and more information regarding the search, visit JACC’s website.

END_OF_DOCUMENT_TOKEN_TO_BE_REPLACED 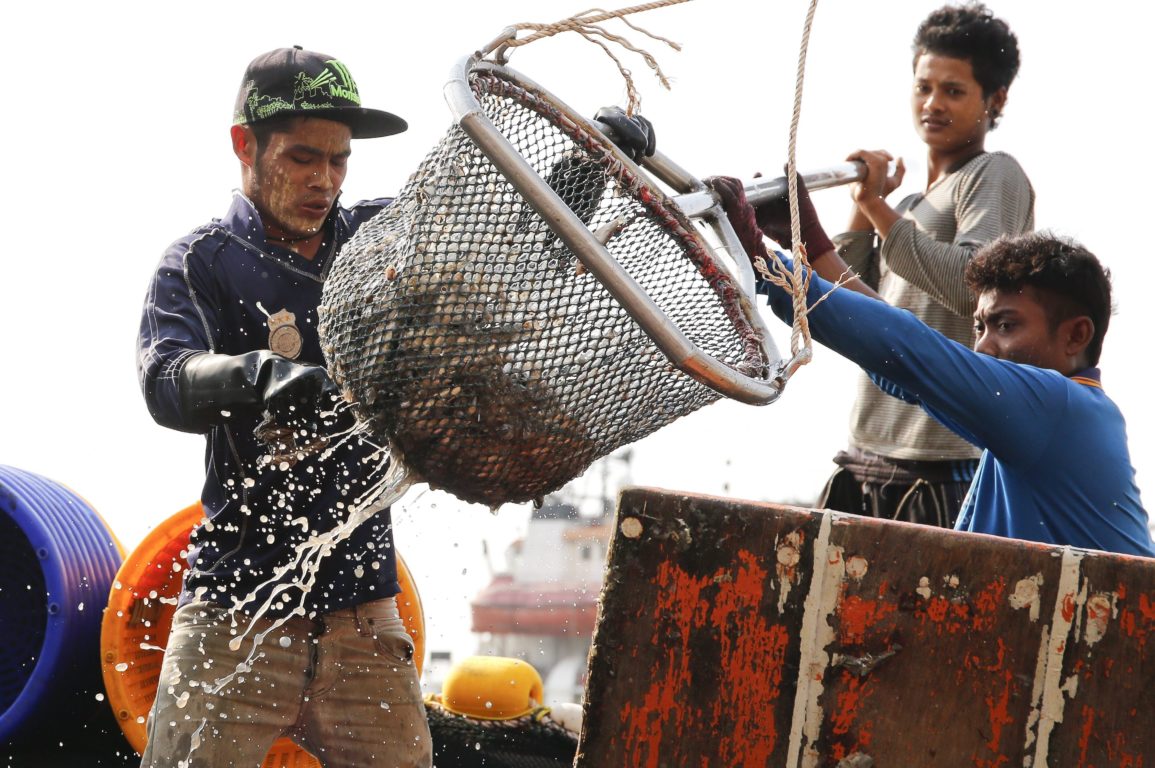