What will the home of the future look like?

What will the home of the future look like? 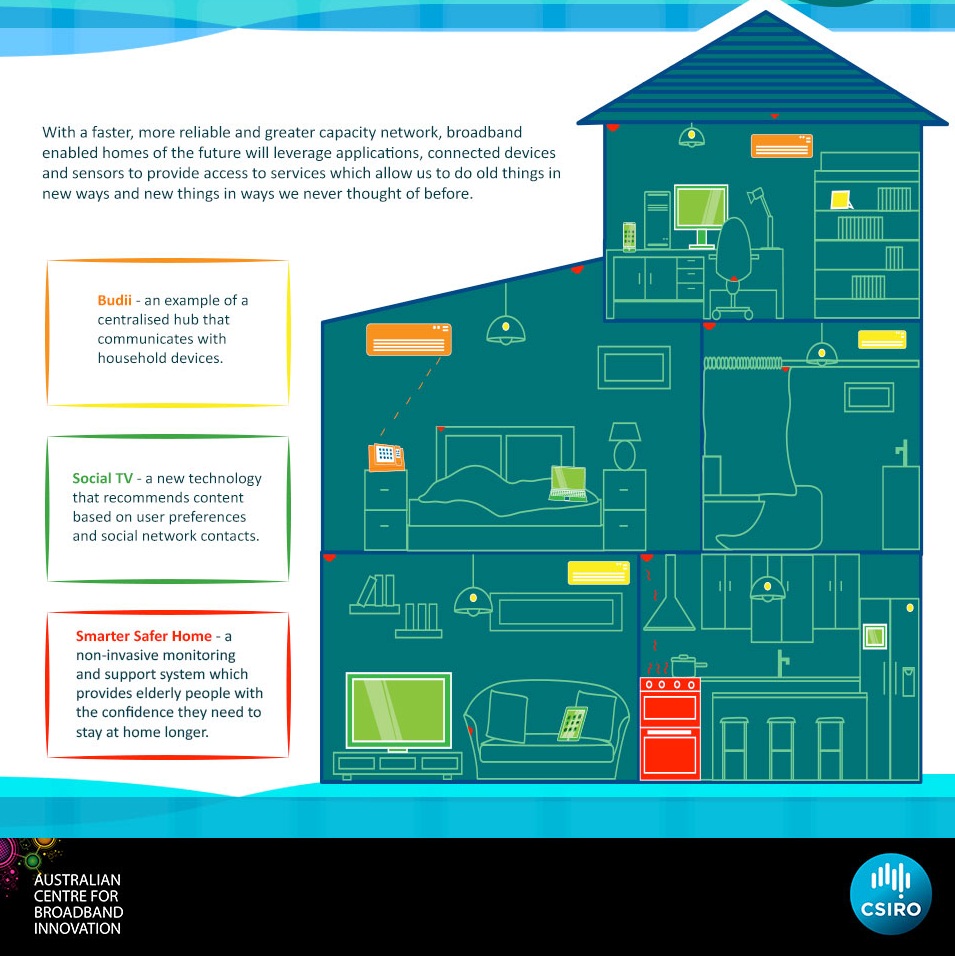 This week, we released research from our ‘Broadband Connected Homes’ report which describes the changing environment of Australian homes, the technologies that are affecting it, and its capacity to support new applications and services. Following on from yesterday’s post on how Australia’s broadband debate has so far ignored the new era for apps, we wanted to share an example of a home set up to test how these new ideas and concepts may actually work in our future homes.

The Broadband Smart House in Armidale, NSW is a facility designed to demonstrate the potential opportunities of next generation broadband networks to Aussie households. A collaborative research project between led by ACBI, UNE, RDA and NSW Govt, it has been set up as a fully functioning NBN-connected family home. The only difference is that it is decked out with a variety of broadband applications as well as the latest in-home technologies from companies such as Samsung and Netgear.

From information to conception

“What excites me about the NBN is that its future proof and that the applications that we’ll be using in five or ten years haven’t even been dreamt of yet,” said Nathan Axelsson, RDANI Executive Officer.

“The Smart Home is all about showing how a house that might typically be used by a family of four can embrace the NBN and touch and feel and learn the different technologies,” he said.

“It’s an open social tool where we aim to give developers, the general public and industry alike the ability to access a home with real information, real data that we can stream to them real time to build applications, develop new solutions, develop new business models and once its proven in one home it goes across the community,” said Paddy Rice, Director of SAM World.

“We’ve gone through the information age and I think the NBN’s really enabling a new age, which is the conceptual age, where its imagination and creativity that’s going to enable us to push new avenues and new frontiers,” he said.

Hungry and brilliant? Get coding…

ACBI in partnership with its industry and government partners such as Intel, Foxtel, iiNet, and the NSW Government has launched a Broadband4Apps competition for software developers to showcase what this next generation of home based apps might look like.

The competition will help Australians better understand what is possible through the smart use of broadband. It will also help accelerate the ability of Australian developers to realise these new business opportunities and connect with service providers, technology partners and end users to build game-changing apps.

Further details about the Broadband4Apps competition and the wider opportunity for broadband connected homes can be found at www.acbi.net.au/broadband4apps

Previous post:
Wormhole Wednesday: ALMA first results – punching through a brick wall
Coming up next:
Our Phytotron gets a face lift!