What the shell: how much is too much plastic for sea turtles?

What the shell: how much is too much plastic for sea turtles?

We know that sea turtles are consuming plastic found in the ocean, but is it actually killing them? 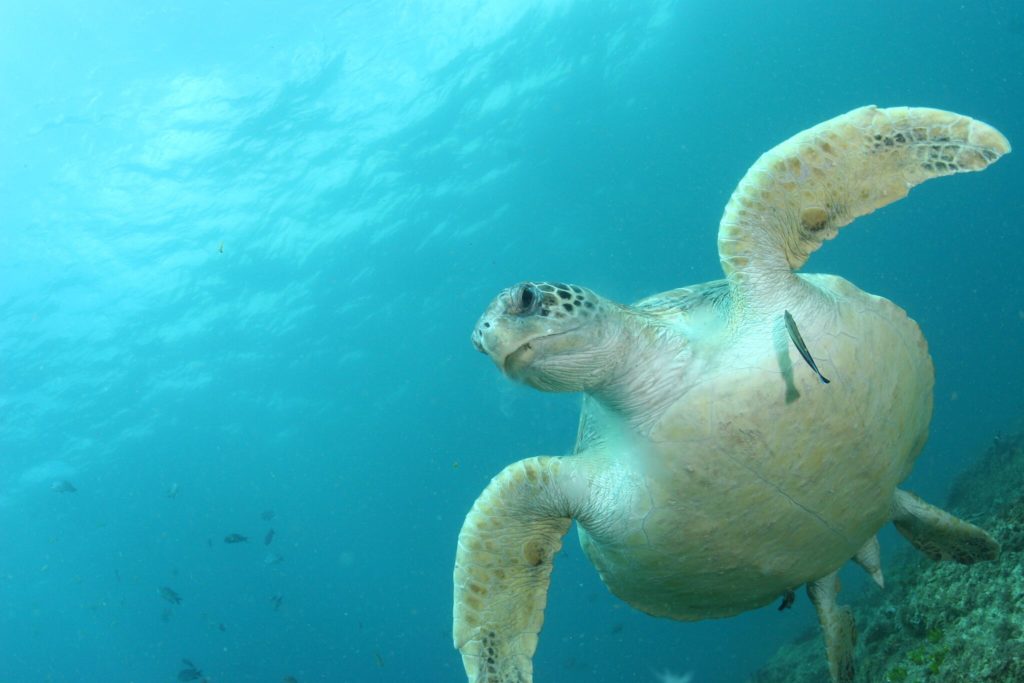 A healthy green sea turtle is cleaned by a cleaner wrasse after enjoying a meal of jellyfish. Image: Kathy Townsend

We all know by now that there’s an obscene amount of plastic in our oceans (and if you didn’t know that you’ve been living under a rock, or giant pile of plastic). It’s been estimated that eight million metric tonnes of plastic winds up in the ocean annually.

We also know that marine wildlife (especially endangered species like sea turtles) are eating plastic, but what we don’t know for sure is whether it’s killing them. Our scientists, together with researchers at the University of the Sunshine Coast and data from the Queensland Turtle Stranding Database, looked at nearly 1000 turtles to find out how much plastic is too much plastic.

Just how much plastic does it take to kill a turtle? 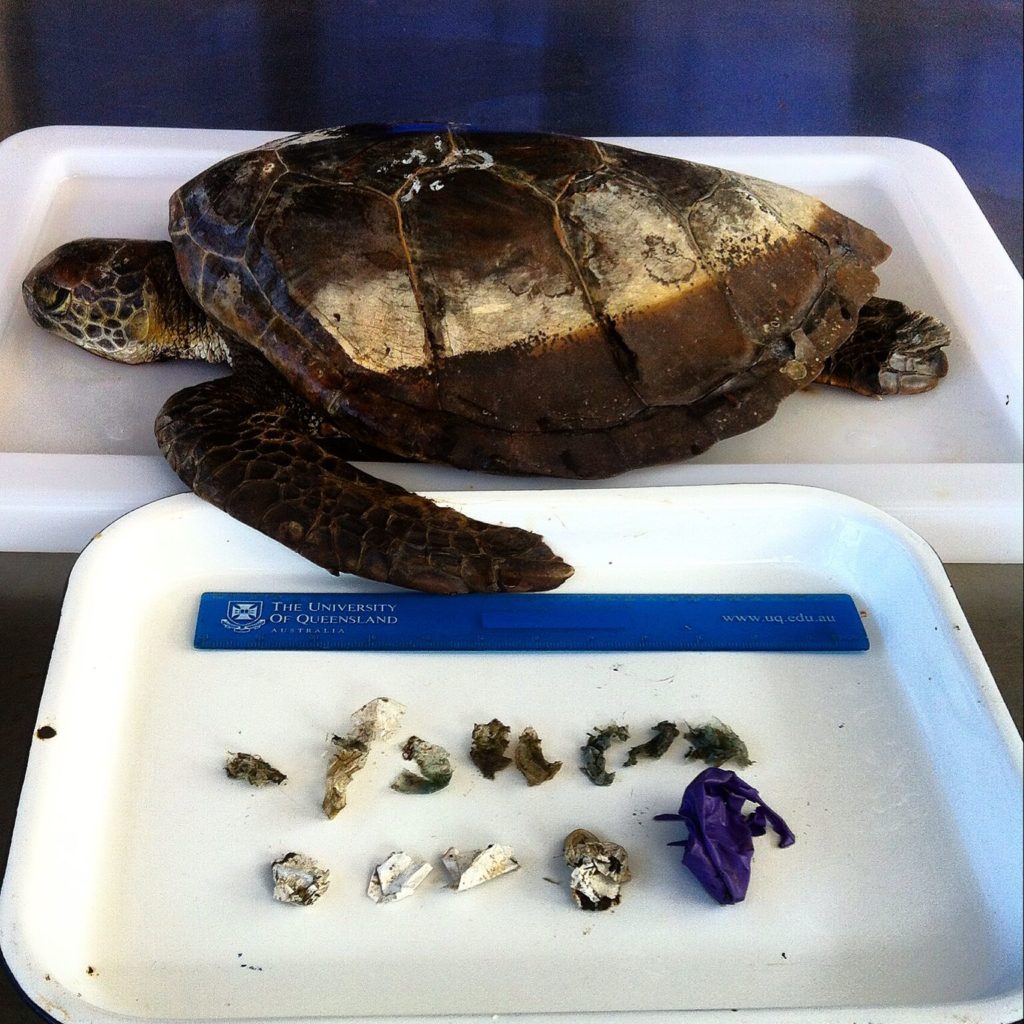 Sea turtle and balloons removed from gut by Kathy Townsend

It sounds obvious that if sea turtles are consuming plastic it would kill them, right? But like everything in science we don’t work on assumptions – we need the cold hard facts to inform possible solutions.

“We knew that turtles were consuming a lot of plastic, but we didn’t know for certain whether that plastic actually caused the turtles’ deaths, or whether the turtles just happened to have plastic in them when they died,” Principal Research Scientist with our Oceans and Atmosphere team, Dr Chris Wilcox said.

To answer the question how much plastic is too much, the researchers looked at turtles that had died and washed up on beaches around Australia. By looking at why the turtles had died and counting how many pieces of plastic they had eaten, the researchers determined that the more plastic pieces a turtle had in it, the more likely it was to have been killed by plastic.

They found that once a turtle had 14 plastic items in its gut there was a 50 per cent likelihood that it would cause death. However, that’s not to say that a turtle won’t die if they consume less than 14 pieces of plastic.

“Some of the turtles we studied had eaten only one piece of plastic, which was enough to kill it. In one case, the gut was punctured, and in the other, the soft plastic clogged the gut, said co-author Dr. Kathy Townsend, Lecturer in Animal Ecology at the University of the Sunshine Coast.”

“Our work shows that a turtle has a twenty-two percent chance of dying if it eats even just one piece of plastic,” said Dr Wilcox.

What can we do about it? 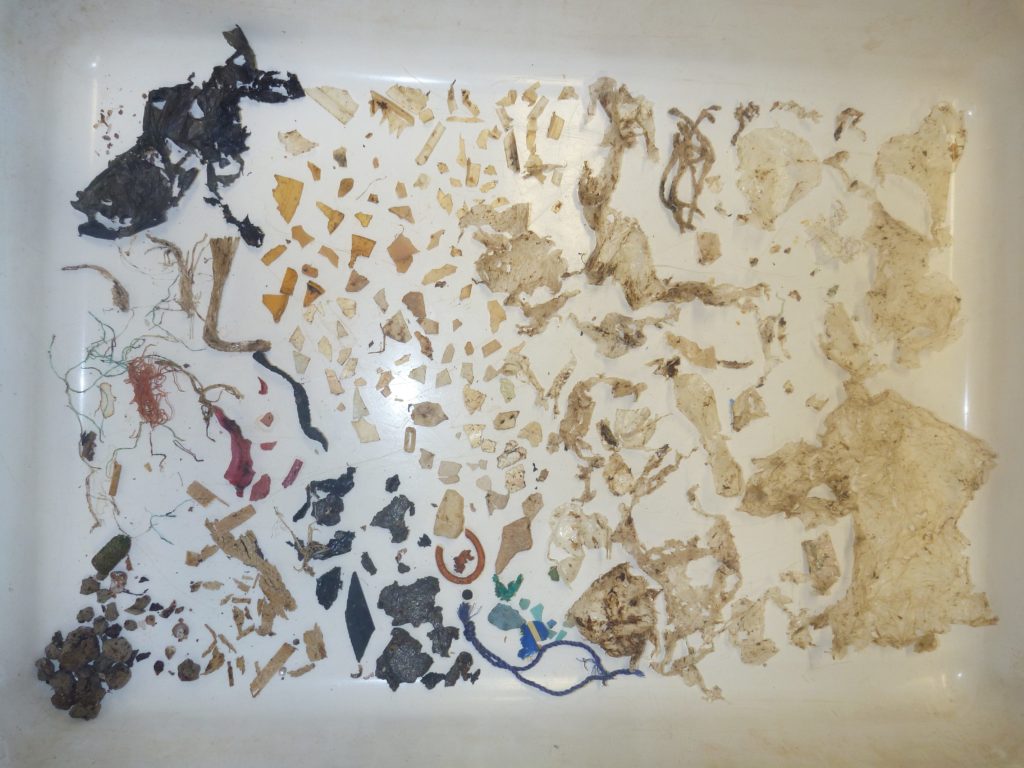 The over 300 pieces of plastic that were removed from just one part of the gastrointestinal system of a green sea turtle. When the load gets this high, the probability of death reaches 100%. Image: Qamar Schuyler

Globally, it is estimated that approximately 52 per cent of all sea turtles have eaten plastic. Determining the effect this is having on turtle mortality is a huge step forwards for understanding the impact of plastic pollution on global sea turtle populations.

“Millions of tonnes of plastic debris is entering our world’s oceans on a yearly basis,” Dr Wilcox said.

“The model we’ve developed can be adapted to help us understand the impact of plastic ingestion not just on individuals, but whole populations of other endangered marine species as well.”

While we’re working on this research, you can do your bit too by reducing the amount of single-use plastic in your life.

Previous post:
How much plastic does it take to kill a turtle? Typically just 14 pieces
Coming up next:
Interronauts | CSIRO podcast Ep 19: Killer T: immunotherapy returns, hydrogen at the bowser, ancient cheese and vego sharks