In October, RV Southern Surveyor was working to the north of Australia, in East Timorese waters recovering and replacing three Integrated Marine Observing System (IMOS) moorings, which had been monitoring the Indonesian Throughflow since June 2010.

We created a graphic designed to help keep you up to date with where the construction project was up to. This is what it looked like in October.

We got hold of some fabulous photos showing how bright blue Investigator will be when finished.

At the shipyard the mystery box was revealed – and it turned out it was a pair of beautiful, big, bright blue propulsion motors.  RV Investigator has two huge electric propulsion motors that drive two propellers, which can propel the ship to a top speed of 15 knots.

Southern Surveyor returned to Darwin where we open the ship up for free public tours, from Friday 12 to Sunday 14 October at Stokes Hill Wharf. We had some great media coverage on the Drive program from 105.7 ABC Darwin with Vicki Kerrigan on board on Friday doing an outside broadcast, ABC TV News came and filmed a story, and NT News printed a story about the ship tours [All on board for science – NT News 14 October 2012]. Check out this ABC Online story with some great photos of the outside broadcast. 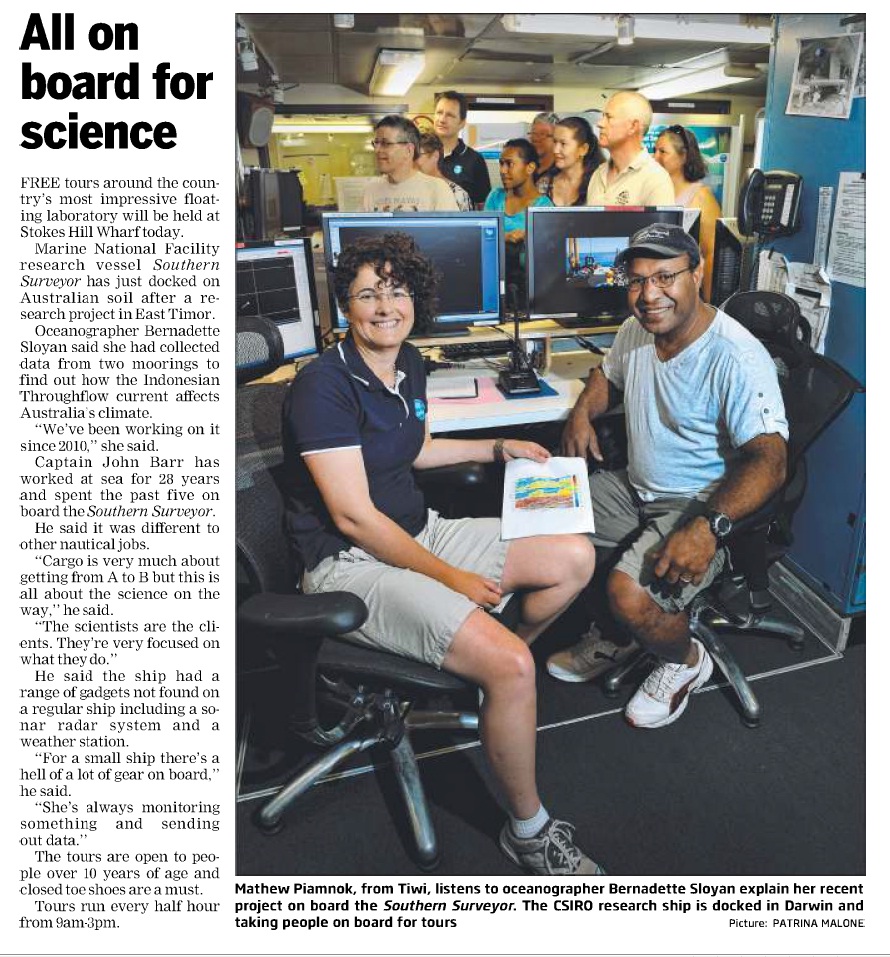 The block we’d been waiting for with bated breath, block 101, or the bow section of the keel, to be finished and was getting very close to being finished! Off to the paint shed… 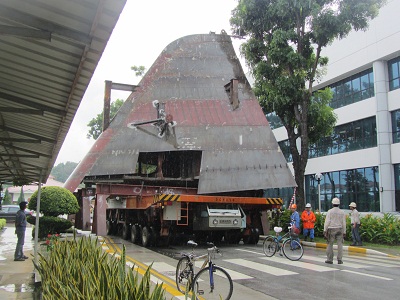 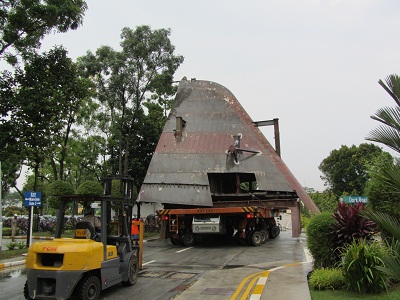 And, ABC 7.30 Tas reporter, Felicity Ogilvie, turned up with her crew to film a great story on RV Investigator. Here it is again in case you missed it!

ABC 7.30 TAS PRESENTER, AIRLIE WARD: The CSIRO’s new research ship will be Australia’s largest research vessel and a game changer for the way ocean science is done. The Investigator, as it is to be called, will eventually be berthed in Hobart, but as Felicity Ogilvie reports, the ship is being built in Singapore.

ABC REPORTER, FELICITY OGILVIE: In a shed the size of two football fields, Australia’s new research ship is taking shape. A traditional Singaporean welcome has been organised for the woman at the helm of the project, Toni Moate from the CSIRO in Hobart.

TONI MOATE, EXECUTIVE DIRECTOR, FUTURE RESEARCH VESSEL PROJECT: The steel cutting ceremony started in January and that was amazing because we had been designing the vessel for so long, so to actually get the steel, to cut the steel, see construction commence was exciting for the team, and since then it really has been quite a rapid progression.

ABC REPORTER, FELICITY OGILVIE: The ship will be called the Investigator and it’s the stuff of scientists’ dreams.

DR BRIAN GRIFFITHS, FUTURE RESEARCH VESSEL PROJECT TEAM: the development of a state of the art, first class research ship which will be able to do all sorts of things that I never dreamed I would ever be able to do.

TIM MOLTMANN, INTEGRATED MARINE OBSERVING SYSTEM (IMOS) DIRECTOR: It’s just tremendously exciting, and the day when it comes down the Derwent will be a fantastic day for Australian marine climate science. It’s been a long time coming, and it’s just great to see it being put together.

ABC REPORTER, FELICITY OGILVIE: The boat is being built in pieces, and they’re big. Some sections of the hull weigh more than 140 tonnes. It will be another year before the ship is completed.

TONI MOATE, EXECUTIVE DIRECTOR, FUTURE RESEARCH VESSEL PROJECT: It’s a massive scale operation. The logistics are incredible, ah, so the vessel will have over 1100 sheets of steel , weigh over 3800 tonne, when the vessel’s finished, ah and so it’s, you know, there’s thousands of people working on the vessel itself, thousands of drawings that we have had to review here in Hobart.

ABC REPORTER, FELICITY OGILVIE: The one off design has had to be tweaked as the ship takes shape. As the project leader, Ms Moate has been visiting Singapore every month to oversee the $120 million project that’s been funded by the Commonwealth. The ship will replace the CSIRO’s current research vessel, the Southern Surveyor. The Surveyor has been the nation’s only blue water research vessel for the past two decades.

TONI MOATE, EXECUTIVE DIRECTOR, FUTURE RESEARCH VESSEL PROJECT: We will keep the Southern Surveyor for a transition period with the Investigator, and we’ll be using her up into 2013, and then we’ll look to sell. We’ve kept her in good nick.

ABC REPORTER, FELICITY OGILVIE: the 66 metre-long Southern Surveyor used to be a fishing trawler until it was modified by the CSIRO. The Investigator will be almost 94 metres long, and it’s set to be a game changer for marine science. That’s because the ship has been designed just for research.

TONI MOATE, EXECUTIVE DIRECTOR, FUTURE RESEARCH VESSEL PROJECT: the current vessel can go for 6000 nautical miles, and this one goes for 10,000 nautical miles, so that means that people like oceanographers can go way out into the ocean and sample parts of the ocean that they’ve never been able to get to before.

ABC REPORTER, FELICITY OGILVIE: the Investigator is luring Oceanographer, Brian Griffiths out of retirement. He spent more than 40 years working for the CSIRO, but never on a ship like the Investigator.

DR BRIAN GRIFFITHS, FUTURE RESEARCH VESSEL PROJECT TEAM: In the early days, there were two of us on the vessel, now there will be 40 scientists and we’ll be able to do such good, multi-disciplinary work. Can take a look at a problem, tackle it from the point of view of the chemistry, the physics, the biology, the biogeochemistry, the geology, the ocean atmosphere interactions. It’s just such a step, huge step forward in the ability to do marine science in this country.

ABC REPORTER, FELICITY OGILVIE: The Investigator will be fitted with specialised equipment such as eco-sounders. That will enable scientists to explore up to 6 kilometres below the surface. While biologists are interested in what lives down in the dark, geologists plan to take samples of the mud from the ocean floor.

DR BRIAN GRIFFITHS, FUTURE RESEARCH VESSEL PROJECT TEAM: It allows us to get down into the deep ocean. It’s a bizarre place. It’s the world’s largest habitat, the abyssal ocean, and you get really, really strange creatures. You get fish that are all teeth and mouth, and virtually nothing else. We can now be able to bench mark the deep ocean and look for potential changes should the climate change. We’ve never had that capability before and now we’ve got it and it’s just amazing.

ABC REPORTER, FELICITY OGILVIE: Scientists from the Integrated Marine Observing System are also looking forward to getting on board. They’re using ocean gliders to measure surface currents and collect data to measure the water temperature, salinity and tepidity.

TIM MOLTMANN, INTEGRATED MARINE OBSERVING SYSTEM (IMOS) DIRECTOR: Well it’s going to help us put those gliders into parts of the ocean we couldn’t get into otherwise. Probably the main ways, the main things it does for us, it enables us to work much more effectively in the Southern Ocean, so the vessel that is operating now, the Southern Surveyor, it can only go to about 50 degrees south safely, so this new vessel will go all the way to the ice edge.

ABC REPORTER, FELICITY OGILVIE: scientists from around the country are already queuing up to join in the maiden research voyage.

TONI MOATE, EXECUTIVE DIRECTOR, FUTURE RESEARCH VESSEL PROJECT: We’ve just gone out for the call for applications in 2014-15. We’ve got about 300 days available and we’ve got requests for 850 days, and so it’s a huge step forward, but if someone would like to give us another vessel, we’d be happy to have it.

Previous post:
Biomaterials are the business
Coming up next:
Quick, ditch the glasses, 2D is the new 3D