What a load of rubbish

What a load of rubbish 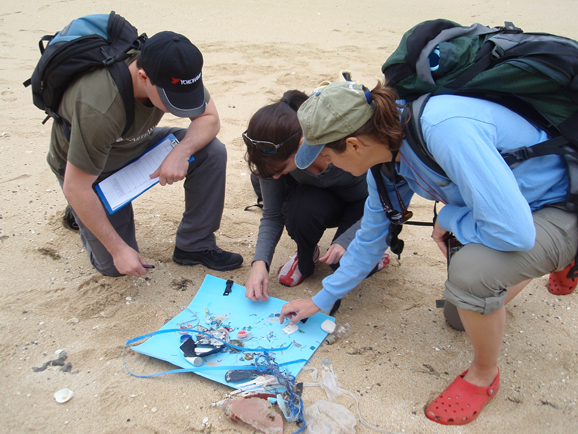 CSIRO scientists and helpers getting down and dirty with marine debris.

CSIRO scientists and helpers getting down and dirty with marine debris.

We’re finding out what the most harmful marine debris is to our ocean’s seabirds, whales, dolphins and turtles. We want to know where it comes from, where we find it and where it goes to when it drifts out into our oceans.

Funded by Shell, the EarthWatch project involved 3,000 school children and CSIRO collecting and analysing debris from more than 200 sites around the country, finding thousands of remnants of our lives from bottles and cans, to light bulbs and fishing line. We even found a refrigerator washed up on an island in the Bass Strait!

We began collecting the rubbish 18 months ago north of Cairns, at 100-kilometre intervals around Australia’s 35,000-kilometre coastline.

It will take another 6-12 months to comprehensively analyse the data but preliminary results are in:

We will be mapping all the cleanup data against ocean currents, to see not only where Australia’s debris comes from, but where it goes. These ‘debris maps’ will be overlaid with wildlife distribution patterns to locate the types of rubbish most dangerous to our marine wildlife.

The marine debris results are part of the National Marine Debris Survey, the first of its scale in the world. CSIRO led the survey as part of TeachWild, a marine debris research and education program developed by Earthwatch Australia in partnership with CSIRO and funding partner Shell.

Find out more about the project.