Weekend with the stars

Weekend with the stars

National Science Week has just wrapped up for another year. One of the week’s final events was a special astronomy weekend at Uluru, in the heart of Australia’s red centre, that brought together some of Australia’s leading astronomers with people keen to learn more about our Universe.

Here, our own Professor Ray Norris gives his account of this special weekend with the stars…

For the closing weekend of National Science Week (22-24 August 2014), I was lucky enough to be part of a brilliant astronomical outreach event at Uluru (Ayers Rock).

It had been widely advertised and so the resort was packed — not just with amateur astronomers but with families and individuals who wanted to combine a trip to this national icon with a taste of what cutting-edge science has to offer.

For three days my colleagues and I gave talks and participated in discussions, gave guided tours of the sky, and just sat and chatted with people over the odd beer or two.

Professor Steven Tingay from Curtin University got schoolkids and grandfathers working together to build a real working radio telescope.

Professor Bryan Gaensler from Sydney University showed how the extreme Universe can stretch our minds, while Professor Rachel Webster from Melbourne University exposed the dark side of the Universe.

And I described the depth and complexity of ancient Aboriginal astronomical knowledge, which has not only provided Aboriginal people with calendars and navigation, but shows how Aboriginal people thousands of years ago figured out how the sky works. 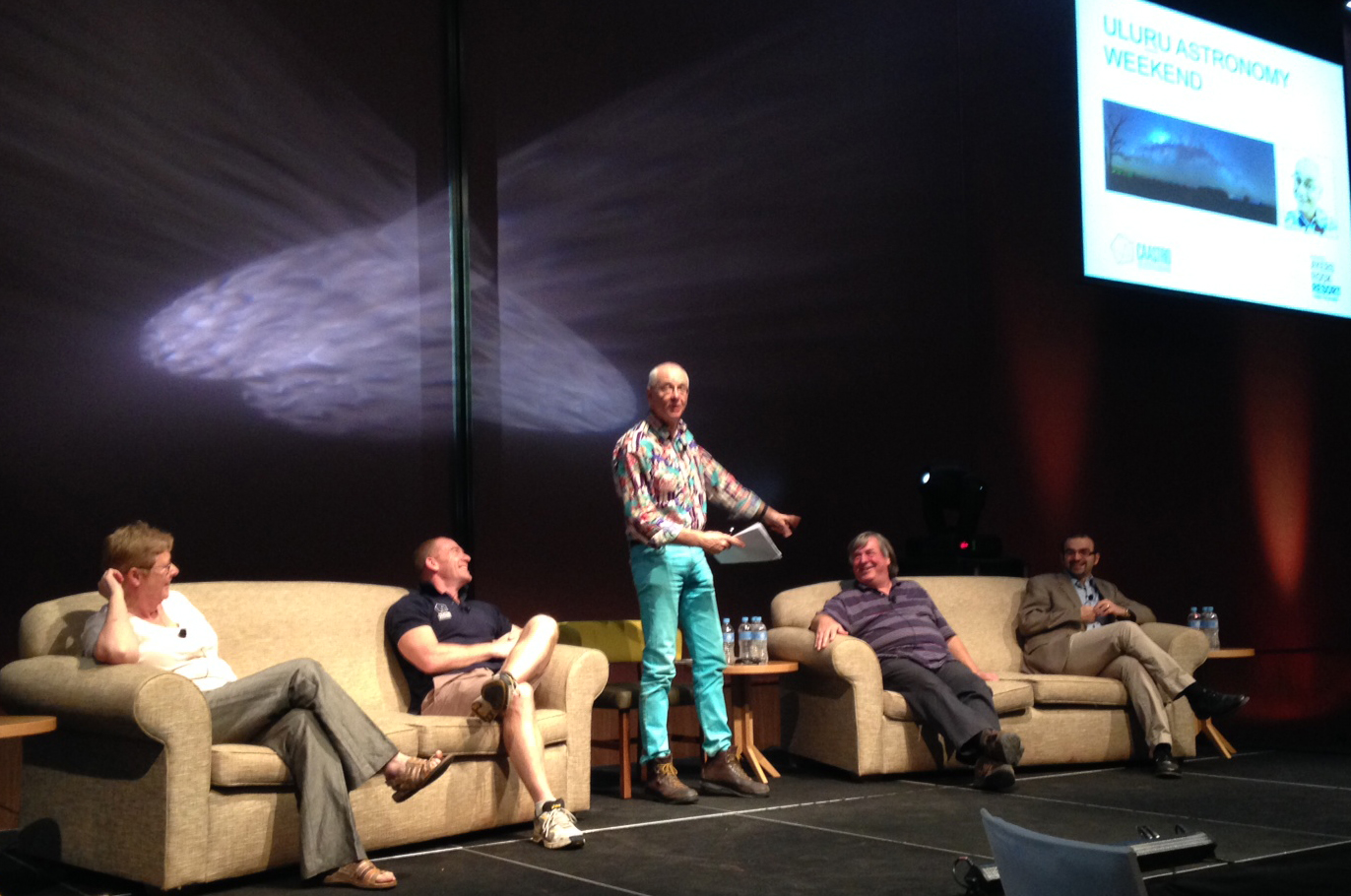 The highlight for me was probably the panel sessions, in which members of the audience would toss us some curly question about the Universe, invariably resulting in an argument between the astronomers on stage, brilliantly hosted by science celebrity Dr Karl Kruszelnicki. “What’s the next Big Discovery?” “Dark Matter!”, “Dark Energy”, “No it’s something we haven’t thought of yet!”

Or maybe the highlight was when someone over dinner asked me about the expansion of the Universe, something that had puzzled them for years: “Where’s the centre of the expansion? What’s it expanding in to?”. Questions like these are bread and butter to most astrophysicists, and it’s incredibly satisfying to work through that knowledge in a one-on-one discussion with someone with a thirst for understanding.

Or was the highlight standing under the ink-black sky, pointing out the Aboriginal ‘Emu in the Sky’ constellation, hearing the unprompted gasps of amazement as people suddenly ‘got it’ for the first time. No, don’t look at the stars, look at the dark spaces in between, and it’s not that big, it’s T-H-A-T big!

Or perhaps the highlight was when I was describing my own research on the evolution of galaxies, and I suddenly saw it from the perspective of the audience.

In our work-life as astrophysicists, we tend to immerse ourselves so deeply into our subject, so focused on the details, that we sometimes lose sight of why this is important, how privileged we are to be employed to tackle some of the biggest questions in the history of the Universe. One of the things I love about outreach is that it reminds me why I do astrophysics!

There were many other highlights, too numerous to list here.

Transplanting cutting-edge astrophysical knowledge into a magical place with an incredible landscape and stunning skies, immersed in an Indigenous tradition going back thousands of years, was a brilliant coup. It resulted from a partnership between CAASTRO (the ARC Centre of Excellence for All-Sky Astrophysics), with which the astronomers are affiliated, and Voyages, the company that manages Ayers Rock Resort.

As we caught our plane back to Sydney, I found out from my fellow passengers, who had been in the audience, that they had enjoyed it as much as me! But I wonder if they realised that I learned as much from the weekend as they had?

Previous post:
Will robots ResQu our rainforests from weeds?
Coming up next:
Can we feed the world and save our species?