Watch out buzz bee, there’s a spider in the house…

Watch out buzz bee, there’s a spider in the house… 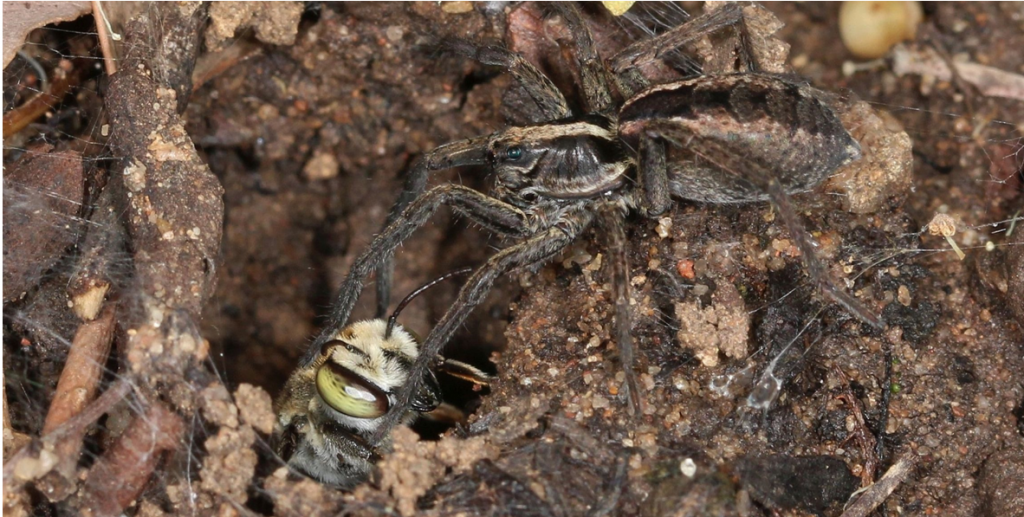 A wolf spider touching it's housemate; a leafcutter wasp

Laurence Sanders, a Queensland Rail employee in Emerald, Queensland has a passion for natural history photography. Recently, he witnessed an unusual species interaction between a leafcutter bee and a wolf spider and uploaded this sighting to Bowerbird, and from there the data was fed into our Atlas of Living Australia (ALA). The ALA is a collaborative, national project that aggregates biodiversity data from multiple sources and makes it freely available and usable online. The wolf spider appears in the burrow as the leafcutter bee comes back with leaves to build her new home. Images: Laurence Sanders.

Laurence’s images show a leafcutter bee bringing a piece of cut leaf back to an apparently ‘disused’ underground burrow. But, a predatory wolf spider was already living there. For three days, Laurence watched the leafcutter bee returning with cut leaves and pollen to build and provision her underground shared home. The bee and spider frequently interacted with each other but the spider never showed aggression towards the bee.

Dr Ken Walker, Senior Curator of Entomology at Museums Victoria happened to see the record and realised it was special. After checking with experts across the world, Ken confirmed this was a world-first. This species interaction had never been recorded before.

Ken is interested in the value of digital collections and the added value they can provide the research community and Laurence’s sighting highlights this perfectly.

“I’m also particularly interested in citizen science digital collections and think they have so much to add to potential biodiversity discoveries – Laurence’s observation showcases the value that ALA’s digital infrastructure and citizen scientists can make to biodiversity research and species discovery,” said Ken. Screenshot of Laurence Sanders’ wolf spider record in the ALA

Occurrence records in the ALA

Biodiversity information in the ALA is mostly based on occurrence records from field observations, surveys and specimen collections aggregated from researchers, land managers, government agencies and natural history collections. Records contain location, date and time of sighting, and many have image, video or sound recording files and notes. In early 2018, there is over 73 million records for over 120,000 species across Australia.

The ALA supports initiatives to digitise physical collections (such as DigiVol), encourages data owners to upload existing data sets and also invites citizen scientists to record sightings. Once in the ALA, the information is freely available online to everyone – researchers, government, industry and the public.

Two clear benefits of ALA’s digital infrastructure are the ease of sharing and accessing biodiversity data from your desktop or mobile device and the capacity to analyse data sets in many different ways.

However, there are many unforeseen benefits of digital collections that go beyond initial expectations, such as greater interaction between different scientific disciplines and the contributions to science made by members of the general public – citizen scientists.

Citizen science and the ALA

The ALA enables all members of society to make real contributions to science.  All data entered into the ALA – be it a large data set from a research group or an individual record of a plant or animal in someone’s backyard or neighbourhood – help provide an ever more detailed picture of Australia’s biodiversity. If you would like to start recording the biodiversity you see in your area, go to Record a sighting.

This blog originally appeared on The Atlas of Living Australia website. Read the original article here.

You can be a citizen scientist too

Previous post:
Helping put the Great Barrier Reef on the road to recovery
Coming up next:
Saildrones: Bots sailing the seas for science missions