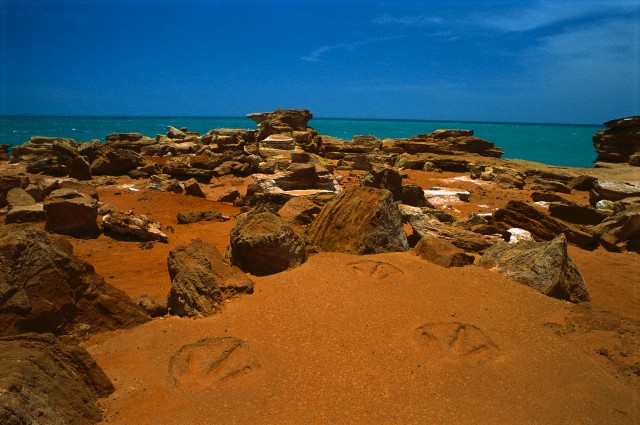 Mighty footprints with a view of Gantheaume Point, Broome. These replicas belong to a large carnivorous dinosaur. Image: © Matthias Breiter

On a sandy bank of north-western Australia, a flock of monstrous birds stride about in the shallow water — silty mud oozes up between their toes. Among their feathered numbers is a Woodstock of droppings, downy feathers, and clashing footprints. These birds are fearsome, toothed, tailed, and not birds at all, but their forebears: theropod dinosaurs, the group that contains the Velociraptor and T. rex.

The muddy sand that these animals walked in is now stone, and these tracks can be found up and down the 100 km stretch of the Dampier Peninsula coastline, also known as the ‘Dinosaur Coast’.

Those three toed bird-like theropod tracks are by no means the only prints around the coast. Some were also left behind by sauropods with feet 1.5 metres in diameter — that is 5’. At least 16 different types of dinosaurs left their impressions with thousands of tracks, even some from ghostly species for which there is no other evidence. 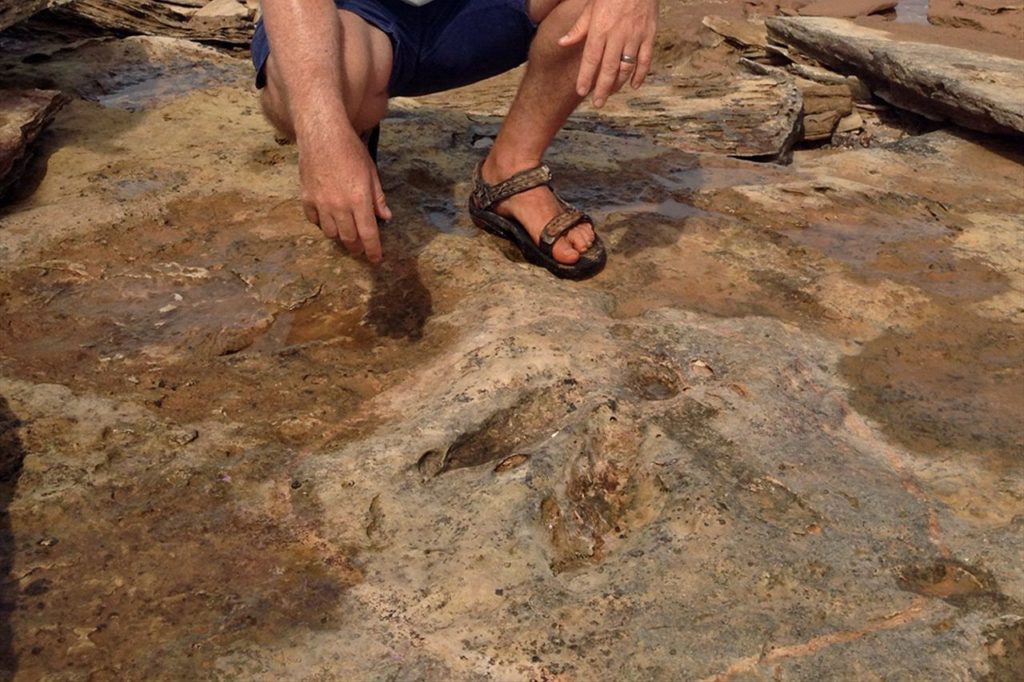 Dr Steven Salisbury standing over a theropod track. Some of these animals stood 1.7 metres tall at the hip. Erin Parke/ABC Kimberley. 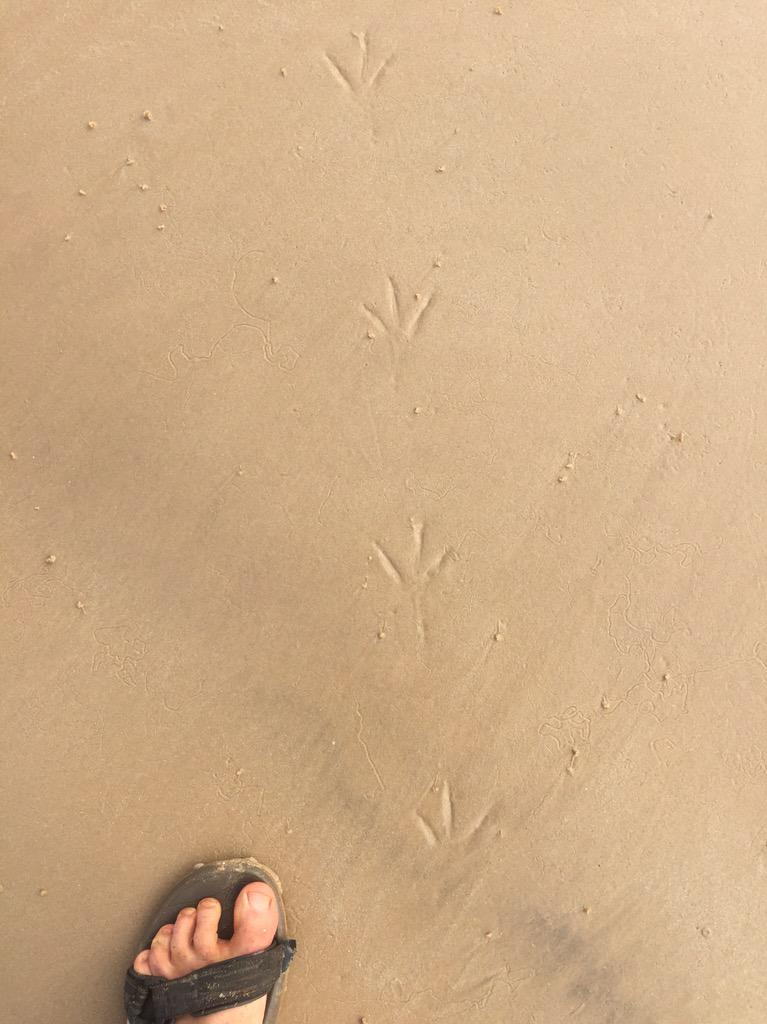 Dr Salisbury’s walking with modern-day dinosaurs: an egret in this case. What will scientists in the deep future make of those sandal prints?

To garner all we can about these spectacular fossil tracks, the Walking with Dinosaurs in the Kimberley research project was born, funded through the Australian Research Council Discovery Project scheme. Headed up by Dr Steve Salisbury from The University of Queensland and Associate Professor Jorg Hacker from Airborne Research Australia at Flinders University, the project brings together an array of experienced and skilled groups including two of our researchers: Dr Robert Zlot, head of Robotic Perception, and George Poropat, Senior Principal Research Scientist in our Energy Flagship.

Together with Dr Mike Bosse from ETH, Zurich, the team is working closely with Goolarabooloo Traditional Custodians and Yawuru Native Title holders to help locate and map the tracks.

Our researchers have been helping the palaeontologists by documenting the 130 million year old tracks using sophisticated 3D imaging technology developed here in our Energy and Digital Productivity Flagships. They have also trained the Queensland team to use the equipment for independent expeditions with the resulting data being sent back to our scientists for processing.

The world to Zebedee, one of our 3D imaging technologies. Image captured by Anthony Romilio, data compiled by our researchers.

Since GPS data are imprecise, other more specialised devices and techniques are also required. The highest resolution data are gathered by a modified photomapping technology called Sirovision and extensions to some commercial packages. These data can be used to generate high-quality 3D outputs of the subject, providing sub-millimetre scale models of footprints.

On a larger scale, Assoc. Prof. Hacker scans the tracks using a specially equipped low-flying aircraft, soaring just 10 m over the rock platforms. The aircraft captures mapping data (high-resolution photos, video, and lidar imagery) as it flies overhead. The data captured by this aircraft can be georeferenced with those from the Sirovision device, enabling data of different scales and resolutions to be integrated.

And at yet another scale, we have the amazing Zebedee.

Zebedee is a handheld lidar (portmanteau of light-radar) that maps the environment as you walk. You simply meander through a site holding Zebedee as it beams out 2D ‘sheets’ of laser up to 15 metres into the environment. As it does so, it eagerly rocks back and forth on a spring, making those 2D sheets of information overlap again and again to form a dense and accurate 3D map of the environment. Zebedee initially arose from research into 3D mapping for autonomous robots.

Zebedee has been used to map crime scenes, heritage sites, the interior of the Leaning Tower of Pisa, and now the footprints of reptiles past.

As well as using our nifty Zebedee, Dr Salisbury and the team have also been using a drone to map the prints from above, a perspective on the animals’ movements impossible from human height.

The tides along the coastline are extreme, at some points drawing back 10 metres down the rock platform before creeping back again. The team must do their work in just a few hours before the tides rise up.

A GIF of the rising tides while the team works. Photos: Steve Salisbury

As well as recreating the tracks with high fidelity, Zebedee and the other tools and techniques are integral for preserving these wonders. The tracks are ephemeral and are constantly being eroded by the relentless sea. “A number of tracks that we have documented last year have disappeared as a result of sand movements during the 2014-15 storm,” said Steve.

The Walking with Dinosaurs project is science at its finest: palaeontological rigour, traditional insight, and sophisticated aircraft and imaging equipment. By using these cutting-edge technologies, scientists are simultaneously preserving and recreating an ancient world that would be otherwise unimaginable.

To follow the project, Dr Salisbury (@implexidens) and Dr Romilio (@a_romilio) are on Twitter. For more information about our wonderful Zebedee, check out this page. 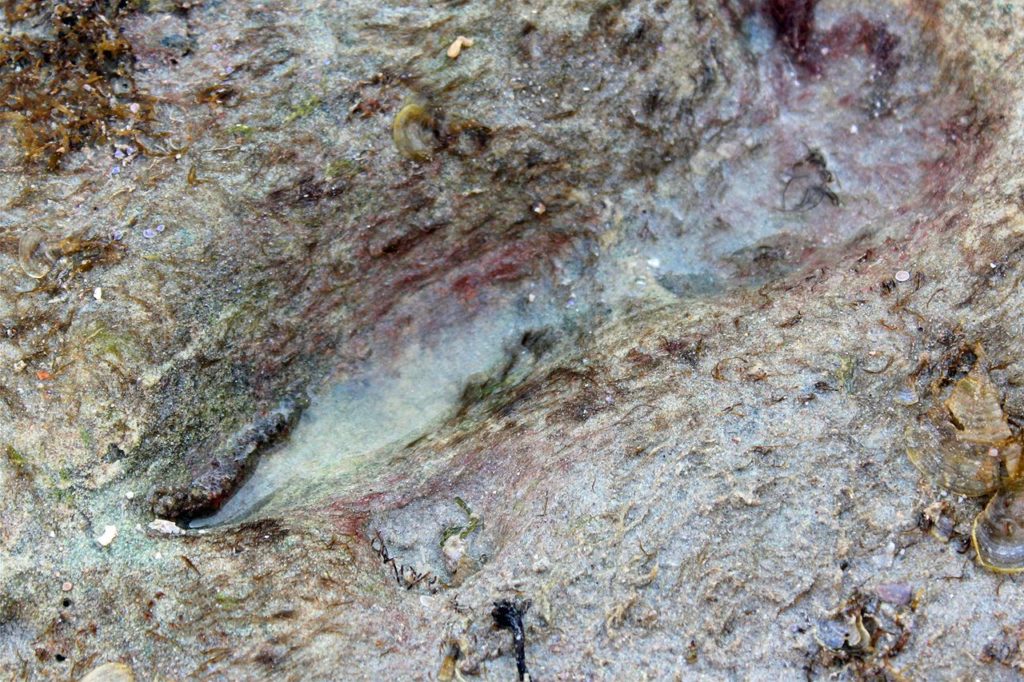 A theropod toe print. The indent produced by the claw and toe pad are clearly visible. Ben Collins/ABC Kimberley 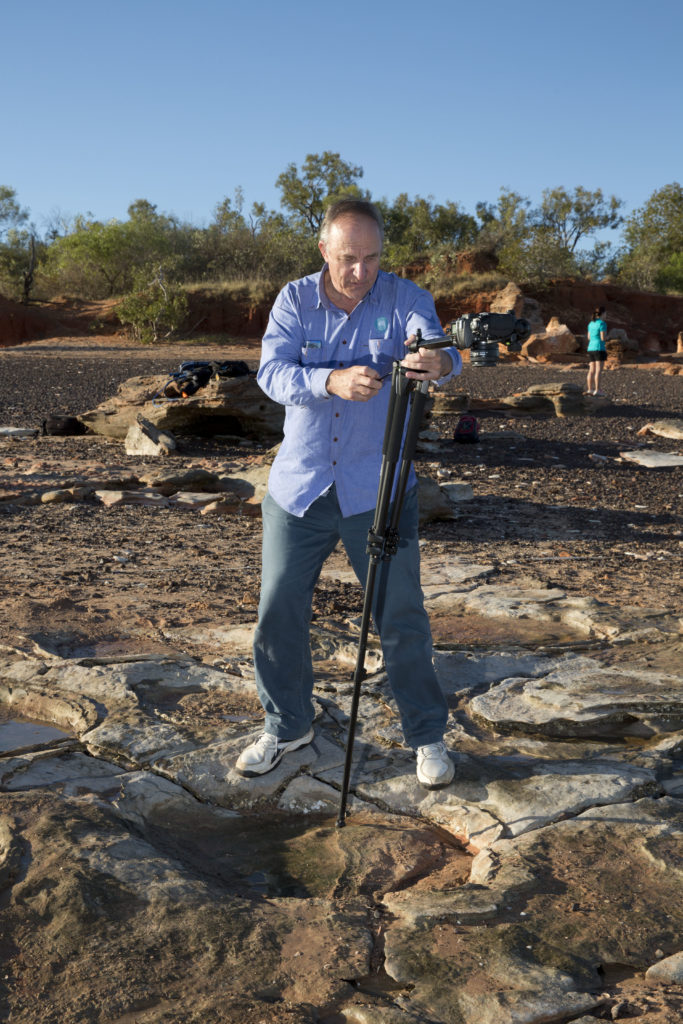 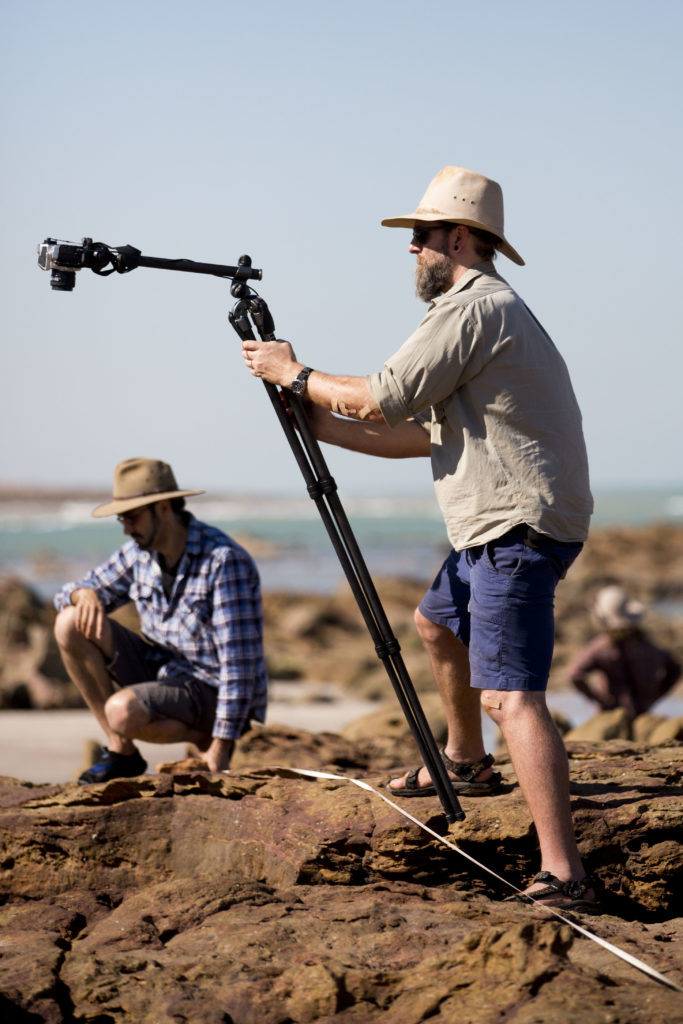 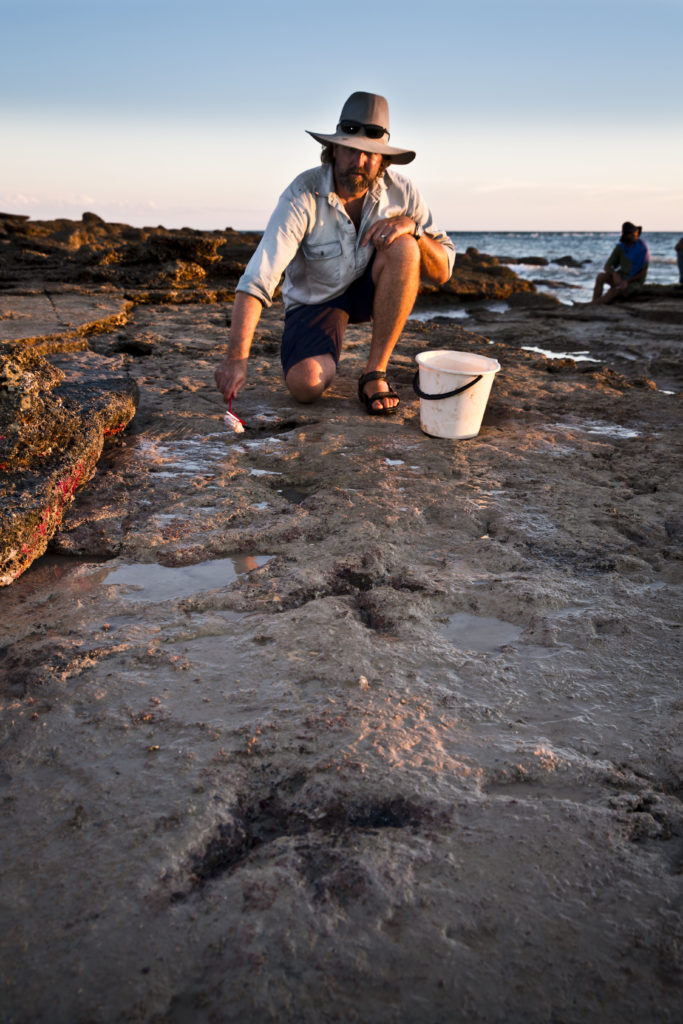 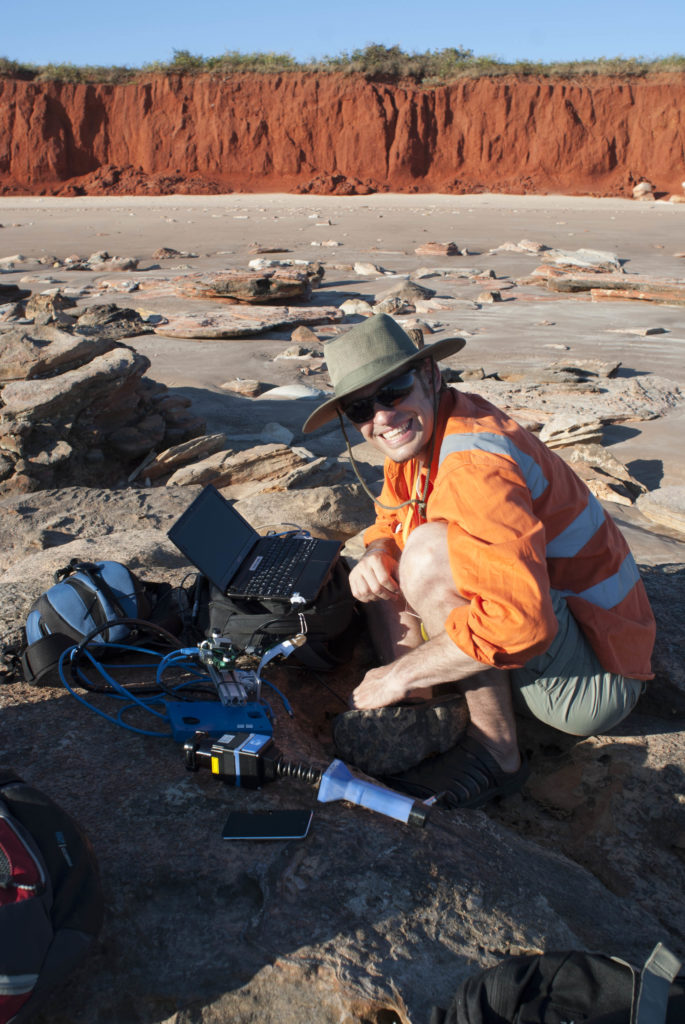 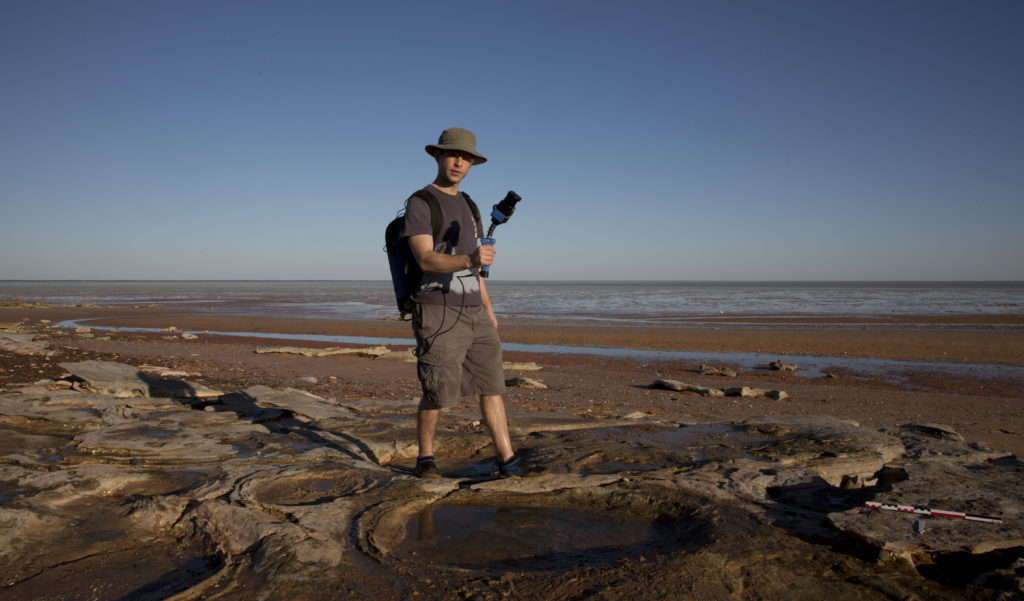