Voyage update: Searching for the meaning of life for ocean microbes

Voyage update: Searching for the meaning of life for ocean microbes

Scientists search for the meaning of life for ocean microbes and find that the truth might be out there, in the mud!

To help tell the story of our most recent voyage, we are excited to be joined by a guest writer from on board, April Abbott from Macquarie University. April is leading a sediment coring project that aims to measure the chemical composition of sediments – commonly known as ‘mud’ – off eastern Australia. The sediment cores collected are also being used to examine the phytoplankton record through time. 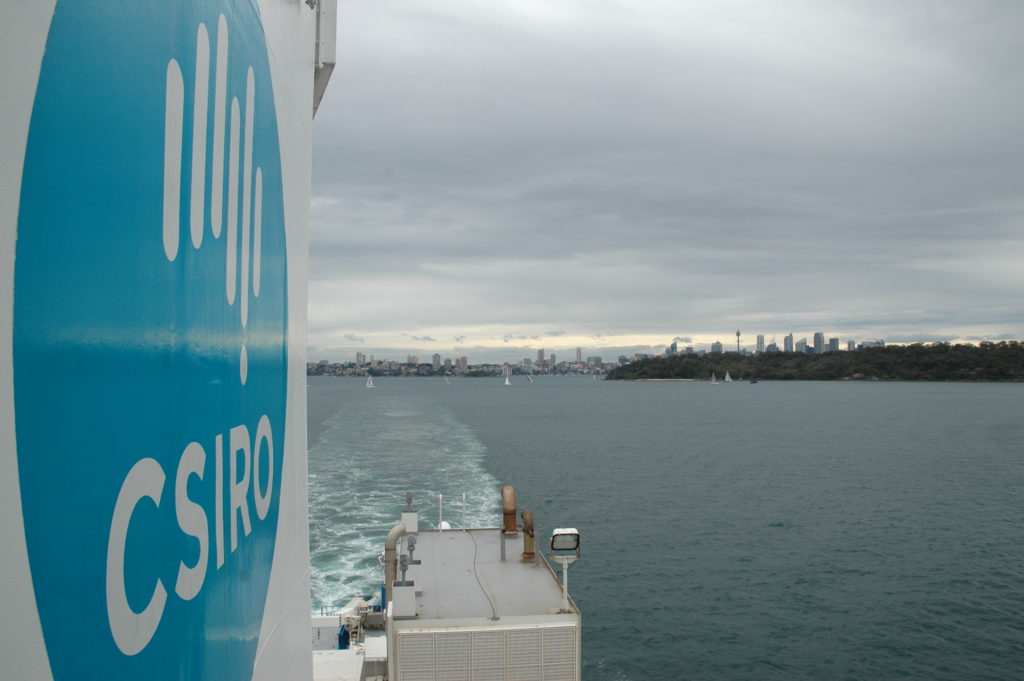 And we’re off! When you first join a research voyage, there’s a lot to learn. RV Investigator is a big ship at 94 meters length, and that means there is a lot of ship to explore (not to mention a lot of people on board!). On this voyage we have quite the science party joining us, including scientists from University of Technology Sydney, University of New South Wales, Macquarie University and Southern Cross University.

In terms of finding your way around, the ship gives you quite a lot of help. Everything on board is intricately labelled, and each staircase entrance lists the major destinations you can reach via those stairs. To help get your bearings (and to keep everyone safe!), the ship’s crew put you through inductions and emergency drills as soon as you come on board, so you quickly learn to navigate to and from key areas.

Food is a major part of life at sea. Science happens around the clock so food is also available around the clock. Many scientists work in shifts, so they need to be able to eat when they are awake, whether it’s during the three fixed meal times or not. It’s a busy time at sea and it takes cooperation to make sure we meet our goals scientifically while keeping everyone safe. It’s an incredibly different lifestyle out on the sea as well. There are people on board that have done this many times before, and lots of first timers too. For those working shifts, you may fall into a routine, but for others it can be more on-demand – if the CTD is up at 5am, then you’ll be up at 5am!

For me and my team, it’s a case of feast or famine. We take part in core processing ‘marathons’ that last about 48 hrs, but there are usually 3-4 days in between to recover. All our core processing operations have been set up in the Dirty Wet Lab. We do need a clean space, but since our work is being done in a glove bag (a thin but expensive plastic, kept safely tucked away until coring day) we can create our own clean bubble pretty much anywhere. 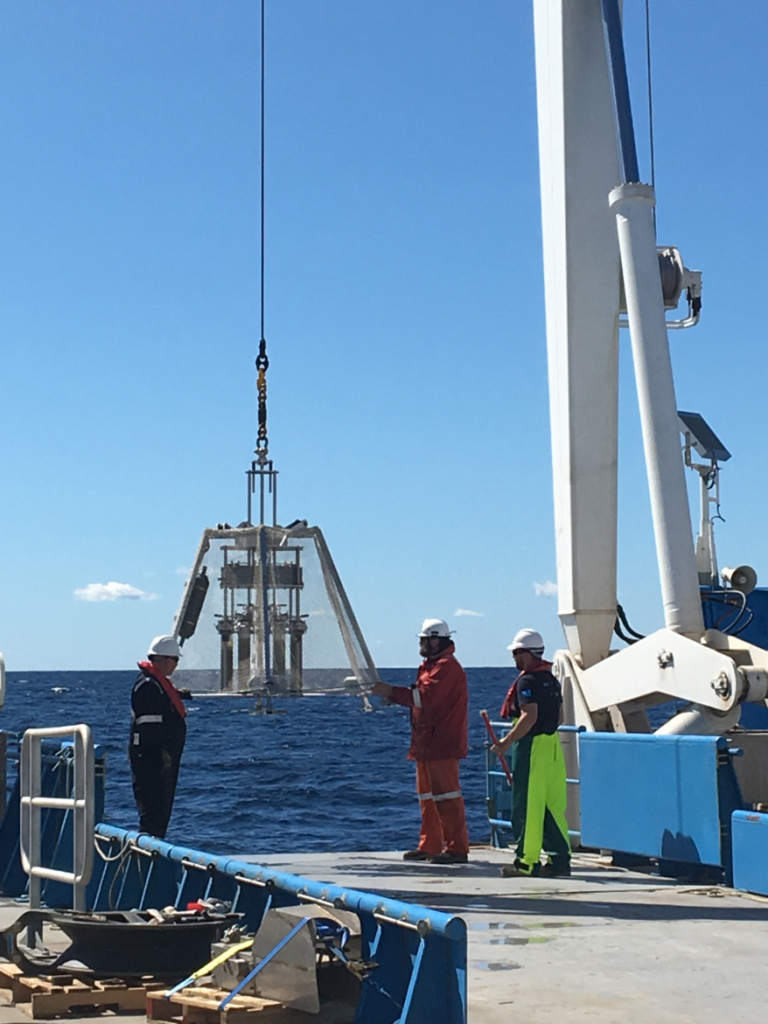 Marine equipment hanging from a cable with three crew members standing on deck.

Multi-corer being deployed from Investigator via A-Frame. Image – April Abbott

Getting our core on!

Sunday was our first day coring, and what a day! Better than anyone could have asked for; sunny, warm, and calm seas. For my project we need many cores, as well as preserving the very upper layer of the sediments. An instrument called a ‘multi-core’ can achieve both of these objectives. 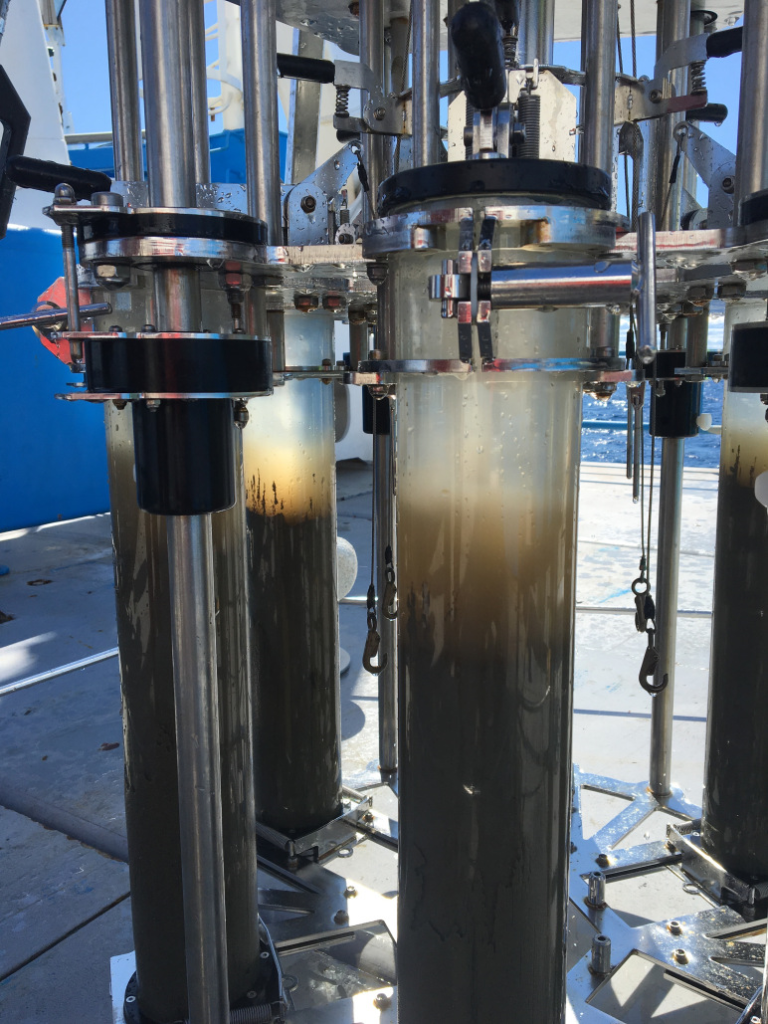 As the name suggests, the multicorer can collect several cores on a single deployment, six cores in the case of the one on board the Investigator. The cores are slowly pressed into the sediments, so on a good recovery you can get a well preserved interface with bottom water on top of the sediments.

With a lot of the science on board focused on life in the water column, pulling up mud was exciting! We had quite an audience and anticipation grew across the deck as we watched the corer go out through the A-frame and disappear into the water. The first site, near Port Hacking, was shallow (about 100 m) so the entire deployment was fairly quick.

The first deployment came back with good penetration. The core tubes contained almost 40 cm of sediment and had minimal disturbance. We carefully loaded the cores into special ‘core cozies’ and carried them from the back deck into the constant temperature lab, a giant walk in cooler being kept at a constant 4°C. Each core sample is generally used for multiple projects so a sampling plan is used to divide up the samples.

Each fraction went into a container specific to the future analysis goals labelled with location, researcher, and depth in core. After we divided up this core, we started the set up for my pore fluid collection. The chemistry of the sediments and the pore water is very sensitive to exposure to oxygen so we need to control the air the core contacts. At collection, the overlying water in the tube protects the sediment from gas exchange, at least initially. 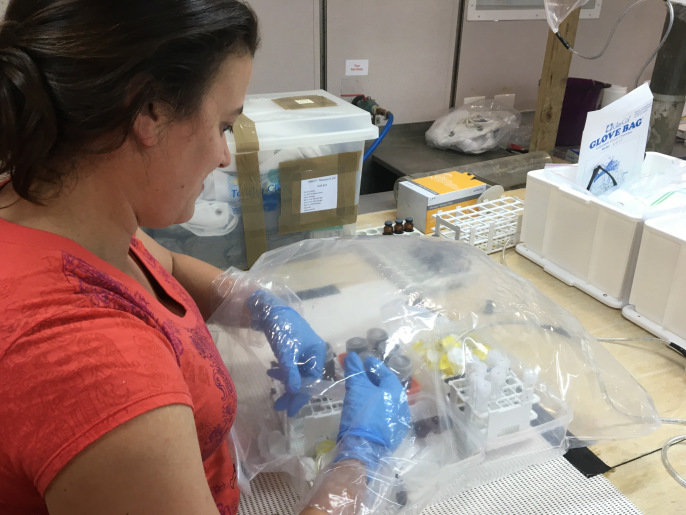 Woman with blue gloves on working in a lab

Working in a glove bag is exactly what it sounds like! Image – April Abbott

The ‘glove bag’ allows us to restrict the air touching the core by filling the bag with inert nitrogen. And the ‘glove’ part allows us to manipulate objects inside the bag while remaining outside of the clean nitrogen environment. Our bags are set up to share a single nitrogen tank to minimize the amount of compressed gas stored inside the lab at any given time. We just clamp the line to one glove bag at a time so the bags can operate independently. 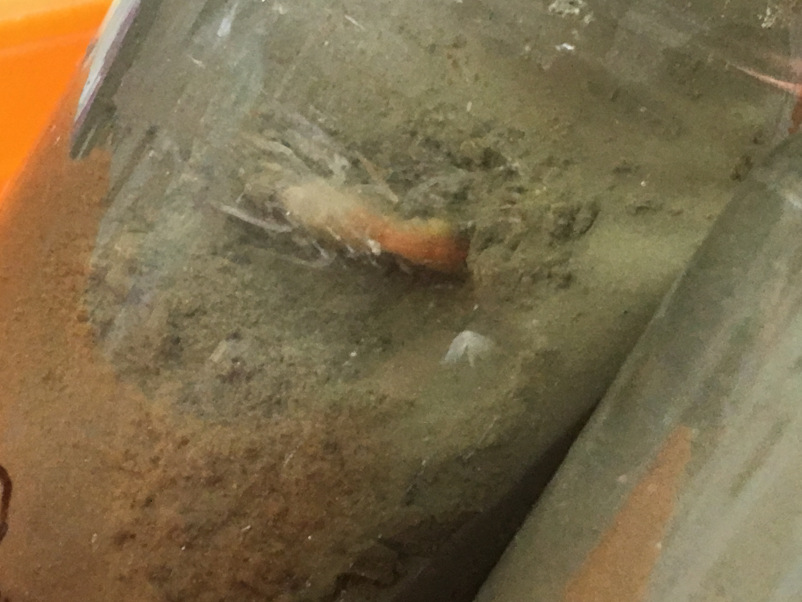 Small animal in mud inside a clear tube.

Being from a shallow site these cores were full of life! Fortunately, we’re sharing the ship with biologists who could help identify the critters. These little guys cause a lot of disturbance in the sediment column through vertical mixing, and the chemistry in and around their burrows can vary greatly from the surrounding sediment.

Another important piece of equipment on this voyage is the Triaxus. This is state-of-the-art technology made from carbon fibre and is hydro-dynamically designed to be towed up to 3 km behind the ship, while ‘flying’ from the ocean surface down to around 300m below. The Triaxus collects a variety of data quickly and is being used on the voyage to do in situ ‘mapping’ of target frontal eddy areas before the locations for sampling transects and CTD stations are determined.

A pod of dolphins check out a Triaxus tow from RV Investigator.

It’s a really tight community you build on voyages like these. If you’re not busy with your own work, you are busy helping others. You learn more, everyone can achieve more and it’s great fun having different people to talk to. Two days after cores from the first site were brought on board, the team has pulled some long days together and processed the first batch of cores.

Now we have a bit of down time to rest, clean up and set up for the next coring marathon!

Want more information about our amazing work on board Investigator? Head on over to the Marine National Facility to find out more.

Previous post:
DIY dinosaurs and other science experiments for kids
Coming up next:
VR Isn’t Just For Games: CSIRO, Augmented Reality And The Future 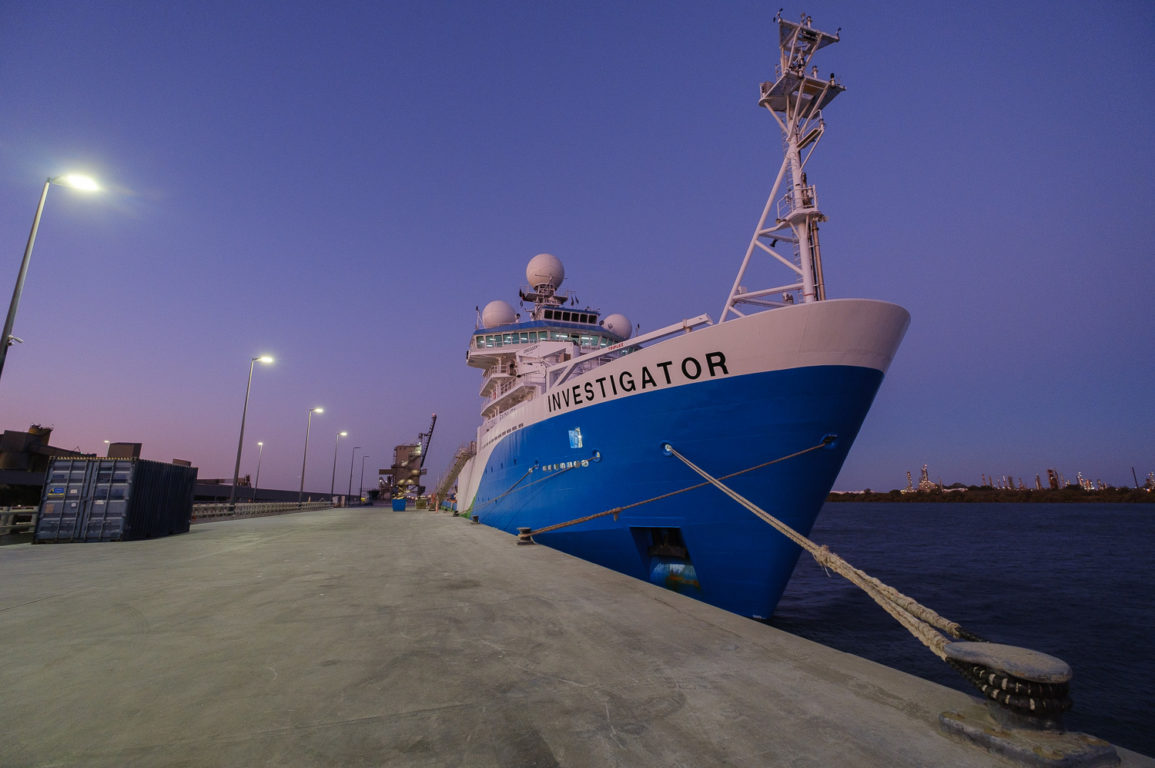