Unveiling the Road to Space

Unveiling the Road to Space

It was a beautifully sunny day in Canberra on Wednesday, just perfect to celebrate the 50th anniversary of NASA’s Deep Space Network, and a great reminder of the partnership between Australia and the US in their space missions.

Our Chief, Megan Clark, was joined by NASA Administrator Charles Bolden, Director of NASA JPL Dr Charles Elachi, and the US Ambassador to Australia, Mr John Berry, to kick off the celebrations with staff from the Canberra Deep Space Communication Complex (CDSCC). At the end of the ceremony, a set of brand new street signs was unveiled to represent the ‘Road to Space’ that the next set of antennas (currently under construction at CDSCC) will offer to the space program. It also bodes well for a strong continued partnership between CSIRO and NASA for the future.

3, 2, 1, REVEAL! The little black curtains are pulled from the signs, to reveal the names of the latest ‘streets’ onsite at the CDSCC. These street signs represent the ‘Road to Space’ and the potential new discoveries that may be made by the new antennas currently under construction at the CDSCC.

Check out the gallery below for a few highlights of the day. 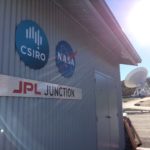 It was a beautiful sunny Canberra morning on Wednesday 19 March 2014. 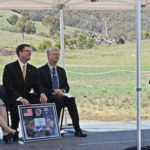 During the ceremony, guests heard from VIPs about the DSN and the importance of Australia’s partnership in the US space missions. (L-R) Charles Bolden (NASA), Megan Clark (CSIRO), John Berry (US Ambassador to Australia), Ed Kruzins (CSIRO) and Charles Elachi (NASA JPL). 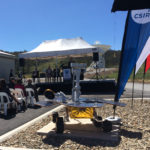 A special guest in attendance listens quietly during the ceremony – a model Mars rover! 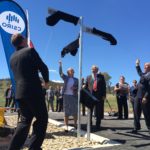 3, 2, 1 – reveal! The signs are unveiled at the end of the anniversary celebrations. 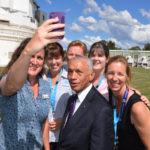 A ‘behind the camera’ view of the Ellen Selfie attempt by CSIRO and NASA staff with Charles Bolden. 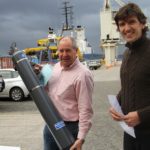 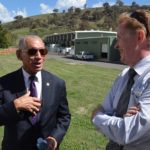 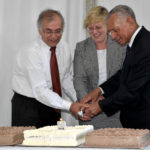 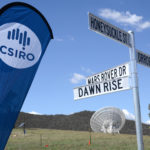 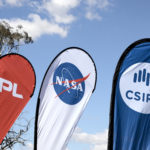 “Celebrating the last 50 years of partnership is only half the reason we’re here today,” said NASA Administrator Charles Bolden, “ 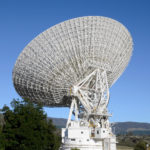 The magnificent 70m antenna, DSN43, is the largest steerable parabolic antenna in the Southern Hemisphere.

If you’ve ever wondered, “What has space science done for me lately?” – oh, you know, just the little things, like memory foam, the miniature camera in your phones, robots, to name a few. This information and much more can be found on the brand new CDSCC/NASA infographics over on our CSIRO Pinterest board. Check them out!

Previous post:
Australia’s part in 50 years of space exploration with NASA
Coming up next:
Look at all the shiny stainless steel in the galley!