At a NASA site nestled in a valley not far from Australia's capital city, a lucky few get a close view of the end of the spacecraft's 20 year odyssey. 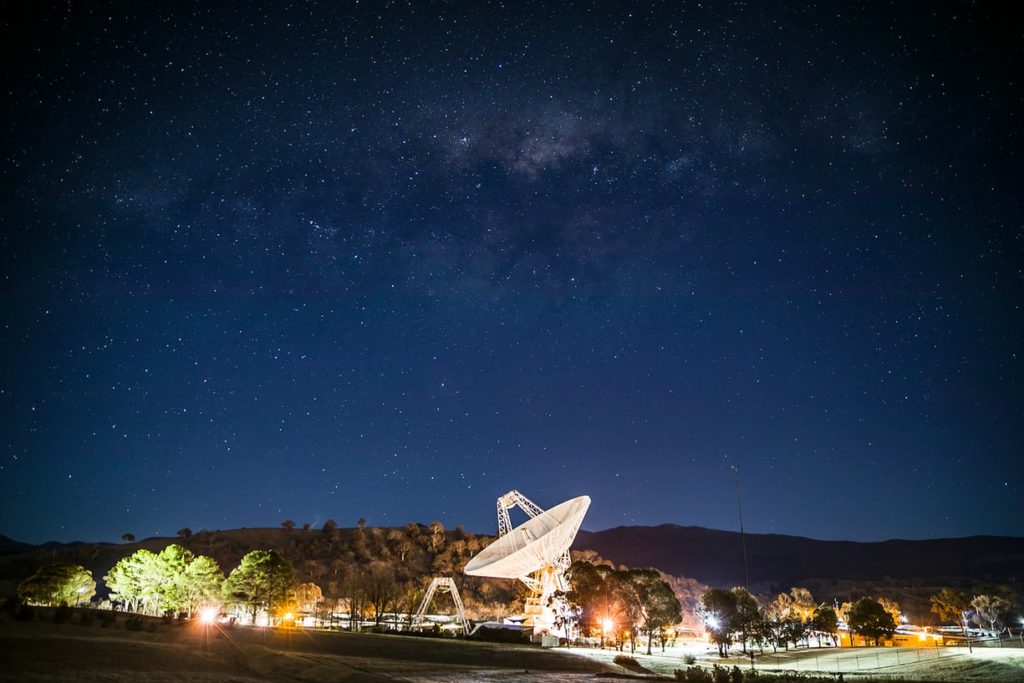 A photo of the night sky at the Canberra Deep Space Communication Complex in Tidbinbilla shows the Milky Way.

A photo of the night sky at the Canberra Deep Space Communication Complex in Tidbinbilla shows the Milky Way. Photograph: Jonny Weeks for the Guardian

At a Nasa site nestled in a valley not far from Australia’s capital city, a lucky few get a closer view of the end of the spacecraft’s 20-year odyssey

Deep Space Station 43 is an imposing piece of hardware. It’s a 70-metre diameter radio telescope, the largest in the southern hemisphere, and on this cold Canberra Friday night, red lights were flashing to signify it was sending data to one of the space missions it monitored. It was the Cassini probe – for the final time.

DSS43 is located at the Canberra Deep Space Communications Complex (CDSCC). It’s a Nasa site run by Australia’s scientific research organisation, the CSIRO, nestled in a valley in Tidbinbilla, a treacherously kangaroo-filled 45-minute drive from the nation’s capital. The public are rarely permitted beyond the cafe and visitor’s centre, but this was a very special night.

Thirty people had been chosen via application to be present for the end of the almost 20-year odyssey of the Cassini-Huygens mission to Saturn, which ended just before 10pm (AEST) on Friday with the spacecraft plunging into the atmosphere of the giant planet. There it will be vapourised into its constituent atoms, a decision made by Nasa to avoid the threat of the probe and its radioactive power source crashing and potentially contaminating one of Saturn’s moons – and the life that looks increasingly possible thereon. 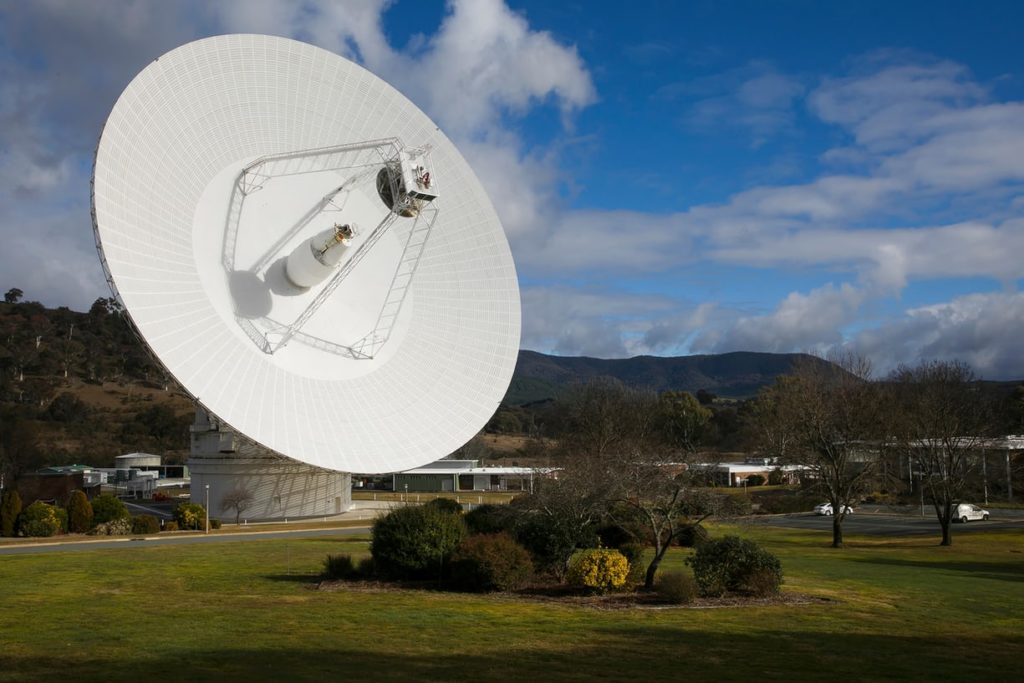 A view of Deep Space Station 43, the largest radio telescope at the Canberra Deep Space Communication Complex. Photograph Jonny Weeks for the Guardian

I’ve been following this mission since the beginning. My late father and I had been captivated by the Voyager missions of 1977, which took the first ever close-up photographs of Jupiter in 1979 and Saturn in 1980, although he was very sick by the time Voyager 2 sent back images of Uranus in 1986 and was gone before the first images of Neptune arrived in 1989.

But Saturn fascinated us both. Dad, like many scientists at the time, was convinced that if we were to find life anywhere else in the solar system, it would be on the massive Saturnian moon of Titan. So when Nasa and the European Space Agency announced a joint mission to Saturn (Cassini) incorporating the ESA’s Huygens lander that would reach the surface of Titan, I knew I’d be paying close attention on Dad’s behalf.

I scoured the media in pre-internet 1997 for information about the launch. I greedily devoured every detail about the long journey to Saturn via gravity swing-bys of Venus, Earth and Jupiter. I marvelled at the science Cassini did: the discovery of seven new moons, the mapping of Saturn’s rings, the discovery of methane oceans on Titan and the shocking discovery of water geysers on Enceladus – suggesting another potential site for biological life.

And years later, a chance meeting with a holidaying member of Nasa’s imaging team meant I got a peek at the freshly-received pictures sent from Cassini the previous day. Even without processing, they were stunningly beautiful. Saturn is the Cate Blanchett of the solar system: it’s simply impossible to take a bad picture. 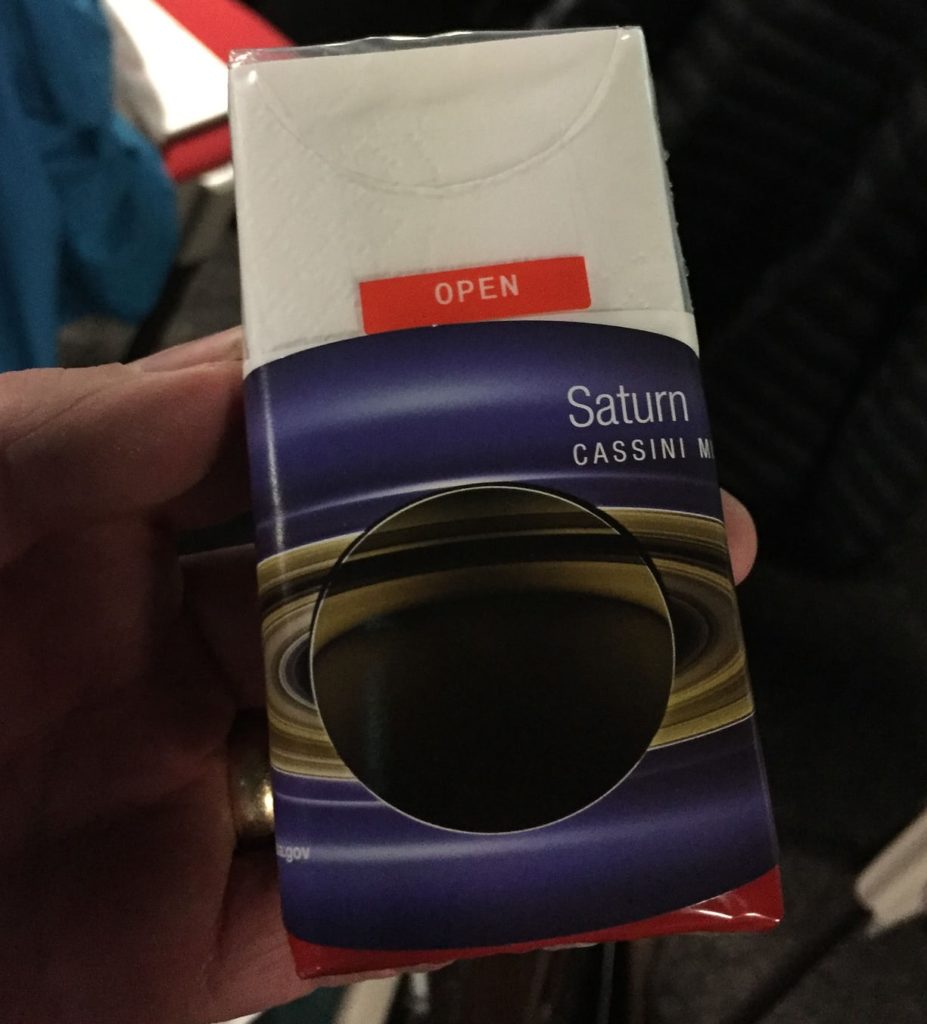 There were some Cassini-branded tissues for the moist-eyed observers during the ‘grand finale’ of the space probe’s demise. Photograph Andrew P Street for the Guardian

Everyone I talked to on Friday evening – postgraduates, schoolteachers, science educators, space nerds like myself who are slightly confused as to why they made the cut – has a similar story about how Cassini captured their imagination.

Our phones had all been switched off since arriving on site, as the signals the four telescopes received were far fainter than the pings of a cellphone trying to find a tower. There’s no reception in this valley in any case, for that very reason.

The celebration of Cassini’s fiery death began with a tour of the CDSCC site, including a tour of the telescopes and the command centre, a walk about the tiny-but-amazing visitor’s centre (which includes a chunk of volcanic basalt, the only piece of moon rock on display outside the US) and presentations from Nasa and CSIRO staff. For an audience of space science obsessives, it was wonderful stuff.

A little after 8.30pm, there was a (non-alcoholic) toast to Cassini. In real time, the probe was entering Saturn’s atmosphere. Saturn was about 1.5bn kilometres from Earth at this point in our orbits so the radio transmissions from Cassini, travelling at the speed of light, were still taking just over 83 minutes to get to us. When the data arrived, it would be a ghost of a robot that hadn’t existed for more than an hour.

The mood to this point had been one of excitement but there was now a subtle shift. Even the CDSCC staff, who make it a point not to get emotional – in contrast to their more excitable colleagues at the Jet Propulsion Laboratory in California – were starting to get choked up.

Half an hour before the signal was due to vanish, the skies above the complex cleared and everyone trooped outside to where the DSS43 was pointed at Saturn, which looked like an unusually bright star in the western sky. By this point, the data of the final transmission had passed the orbit of Jupiter and was heading towards that of Mars. 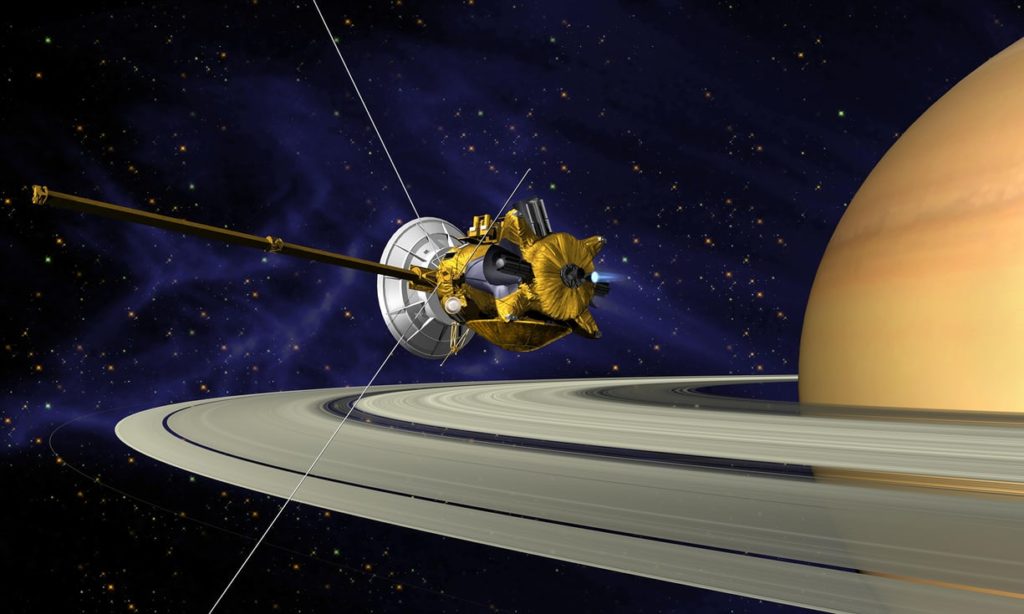 A concept drawing of the probe Cassini near Saturn

An artist’s conception of Cassini’s Saturn orbit insertion. The spacecraft ended its expedition on 15 September 2017, following a series of 22 dives through the 2,400km gap between Saturn and its rings, with a final plunge into the gas giant. Photograph: Nasa/JPL-Caltech Handout/EPA

We then went back in to await the inevitable.

At 9.53pm AEST, as predicted, there was a wobble in the hitherto-stable X radio band. It jumped around for a few seconds, and then went dead. A few seconds later, the stronger S radio transmission did the same, and contact was officially lost. Of course, by this time Cassini was nothing but a mist of atoms floating among the swirling cloud tops of Saturn, but the effect in the room was like seeing a heart monitor flatline.

There was a deep intake of breath, and then silence. No one made eye contact. We were told California’s Jet Propulsion Laboratory had grief counsellors on site for staff, some of whom had dedicated decades to the mission. I could see why.

On the displays showing the status of the four telescopes on site, DSS34 and DSS36 continued to communicate with the far-off Voyager 2 probe. DSS43 and DSS53 were silent.

As we walked out into the frigid night air, DSS43 was gently moving into position for its next assignment. Saturn still shone bright in the sky.

This article was written for The Guardian and has been republished with permission. View the original article here.

Previous post:
Expect the unexpected from the big-data boom in radio astronomy
Coming up next:
German telescope wears Aussie tech