University of Sydney researcher Dr Valentina Mella had placed a camera in the tree-tops to study koalas at night. When reviewing the footage, she was shocked to see a fox climbing about, searching for its next meal. 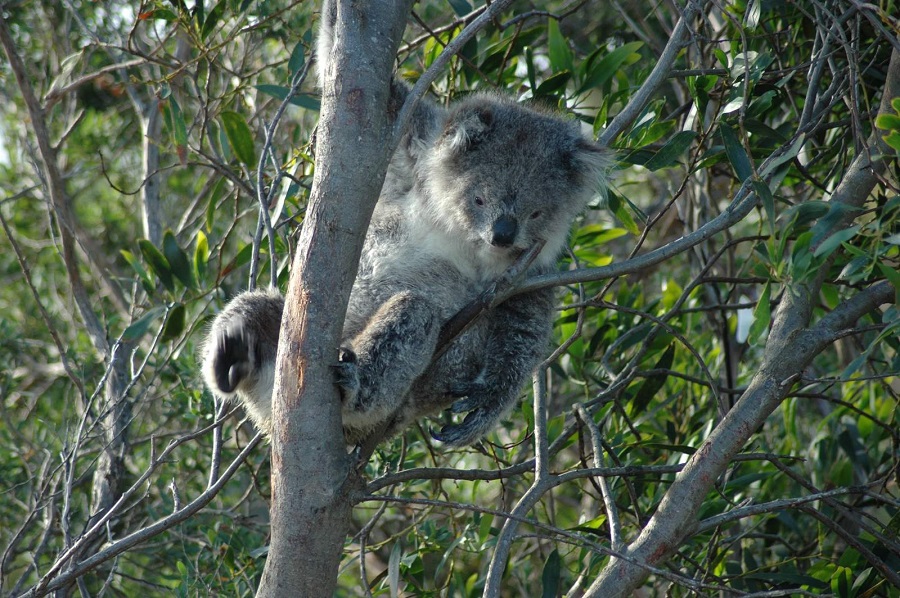 A photo of a koala in a tree looking down

We wish our title was click-bait, unfortunately it’s not. Photo by Jane Dingwall

As if chlamydia and deforestation weren’t enough to deal with, our much-loved cuddly koalas now have to battle feasting foxes.

Foxes certainly deserve their reputation as a cunning creature – since the European red fox’s Australian debut in the 1800s they’ve adapted and thrived in our *nothing-at-all-like-Europe* landscape. The fox (Vulpes vulpes, for those playing at home) has caused the significant decline of many of our native terrestrial (ground-dwelling) animals including bilbies, wallabies and numbats.

Until recently, we thought our tree-dwelling friends were safe. Evidently we hadn’t given the fox enough credit for its hunting ingenuity.

University of Sydney researcher Dr Valentina Mella was studying koalas when she placed a camera in a tree on a property in the Liverpool Plains, north-west of Sydney. You’ll never believe what happened next. Well, you probably will because we’ve already told you. The below is the first video evidence of foxes climbing trees as high as four metres and showing predatory behaviour.

Mella’s camera caught the fox in the act of sniffing out prey – via New Scientist.

“There was always a lot of sniffing and investigative behaviour by foxes where koalas and other native fauna had been, so I would say that the reason for climbing the tree was definitely to look for a prey,” Mella said.

“Simple curiosity could be another explanation but this is a trait that makes foxes such clever and opportunistic predators, so curiosity does not exclude predation motives.”

Mella had been warned she might see this kind of behaviour, the owner of the property had explained he’d seen the foxes in trees on many occasions.

“Foxes are curious, agile and opportunistic,” she says.  “It’s a terrible combination for native Australian animals.”

Lumps and bumps to blame

While there’s been a few sightings of foxes jumping up trees in Europe, it’s not considered common practice.

As is the way in nature, when faced with a new threat, species must adapt or migrate to safety if they want to survive.

“There is no mammal predator in Australia that would climb trees to hunt an adult koala, so the question is not whether koalas are defenseless but how can they cope with a predator that they do not expect to encounter in a tree?” Mella said.

“We did not notice any change in the behaviour of the koalas and this is the real worry. Foxes represent an unrecognized threat for Australian fauna and as such, a very dangerous one,” she added.

Mella said further research needs to be done to confirm foxes are preying on our treasured tree-dwellers, and that we’ll need to reassess the impact of feisty foxes.

Valentina Mella’s research was recently published in Australian Mammalogy. Find out more about her article on CSIRO Publishing’s website.