The planner’s new best friend: we can now track land-use changes on a scale of centimetres

The planner’s new best friend: we can now track land-use changes on a scale of centimetres

Improvements to digital aerial photography techniques allow us to monitor changes as small as 10-20 cm, in both land use and vegetation.

The urban landscape is complex and ever-changing in cities such as Perth, but digital aerial photography can now monitor even the smallest changes. Wikimedia Commons, CC BY-SA

Cities and mine sites are complex spaces, which frequently change at a fine scale. This makes them hard to monitor. It is now possible, though, to adapt digital aerial photography to monitor changes as small as 10-20 cm in both land use and vegetation in three dimensions.

Interested? Wondering whether that’s feasible? Here’s how you can do it cost-effectively.

Monitoring changes in land cover including vegetation has been routine since digital satellite imagery became available in the 1970s and 1980s. However, satellite images have traditionally been too coarse to monitor complex environments such as cities and mine sites, so aerial data is often acquired. In addition to needing sub-metre resolution, city buildings, mine pits and spoil dumps present challenges for automatically tracking change.

Analogue (film) imagery has been used for aerial monitoring long after digital photographers replaced film in hand-held cameras. This is partly because changing large programs with multiple users is risky.

About ten years ago the authors started working with Landgate, the Western Australian government agency responsible for photographing Greater Perth. Our aim was to see if the advantages of satellite monitoring could be incorporated into Landgate’s annual aerial photograph capture to detect changes in land use and vegetation condition at the sub-metre level.

How is it done?

As well as recording red, green and blue bands of light, a near infra-red band was included because vegetation health is best measured at this wavelength. The elevation of the ground, buildings and trees is estimated each time, with a similar resolution as the pixel size making the imagery three-dimensional. Being digital, it is easy to count pixels to quantify changes.

Digital data allows changes over time to be measured with much greater accuracy and efficiency than when comparing film images.

It requires, though, that the images be captured using a standard approach. Standardised images ensure that a change in digital reflectance represents a real change and not a change in the atmosphere, sun angle, camera type or a shadow. Each image also needs to be very accurately aligned.

Reflectance targets were placed on the ground to ensure images were standardised during the acquisition as well as between years. 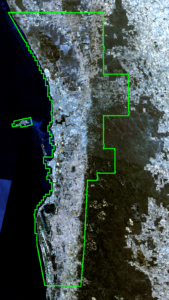 After trials in 2006 and 2007, summer images were chosen. This was because these met most of the requirements of the consortium of 13 government agencies and non-government organisations that guided the transition from analogue to digital.

Summer is a time when un-irrigated plants are most stressed. This enables monitoring of soil water deficits, groundwater-dependent vegetation and an assessment of irrigation efficiency at the individual-sprinkler scale. There is also less cloud and the impact of recent rainfall is less evident, given that the capture can take several weeks. To limit shadows, capture times were restricted to two hours each side of solar noon.

The area covered by the digital aerial photography each summer (see figure at right) extends beyond that needed to update street directories. It includes groundwater catchments, pine plantations and peri-urban horticulture. This coverage also enabled us to monitor disease impacts on native trees of interest to the consortium.

Technical details can be found in an article in the International Journal of Digital Earth and on the Urban Monitor website. The website includes a beta test site of vegetation products maintained by Landgate.

Many uses, and counting…

The method has been applied to:

1) Monitoring tree canopy cover in the Greater Perth region for state and local government planners to assess habitat loss and an increase in the urban heat island. 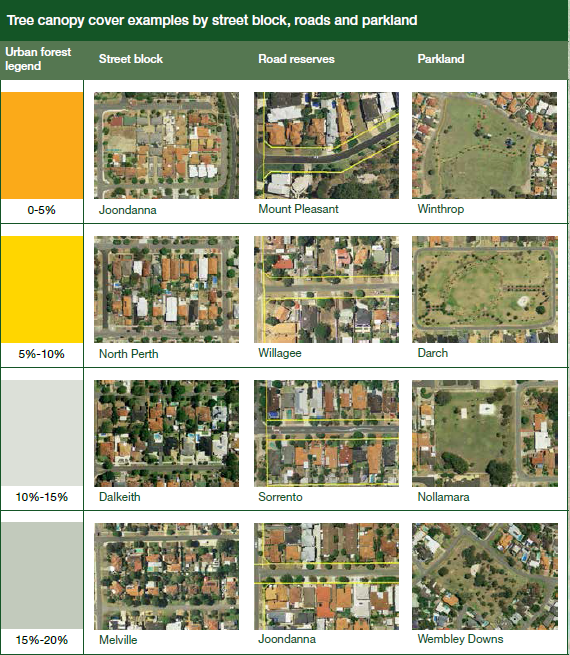 2) Identifying tall trees (even those in low-elevation areas) of importance to roosting birds such as the endangered Carnaby Cockatoos for the Perth Peel Regional Sustainability Plan. In the image below, tree heights are shown in increasingly “hot” colours, displayed with a sun-shaded elevation model in grey for unvegetated areas. A digital orthophotograph of the area is shown on the left. 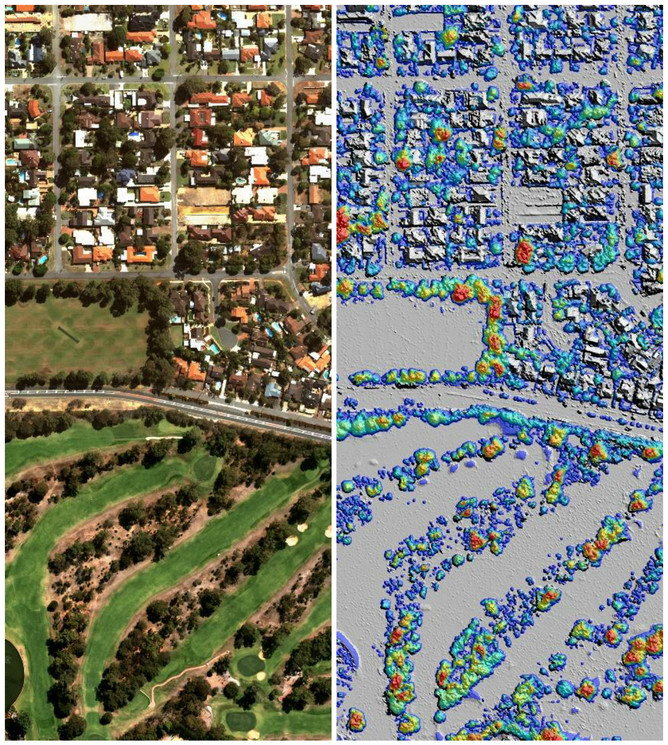 Tree heights are shown in increasingly ‘hot’ colours in a sun-shaded elevation model (right) of the area in the digital orthophotograph on the left.

3) Tree and bush decline in native vegetation in urban areas. The image shows vegetation losses in red, growth in green and no change in yellow. Non-vegetated areas are uncoloured. 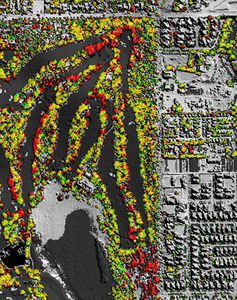 This image shows vegetation losses in red, growth in green and no change in yellow

4) Estimating the effect of urbanisation on urban water balances, especially runoff and recharge. Being three-dimensional, the images can identify where water will flow in new urban catchments.

5) The identification of blocks of land that have been built upon for urban infill planning (shown as red blocks in the image below). 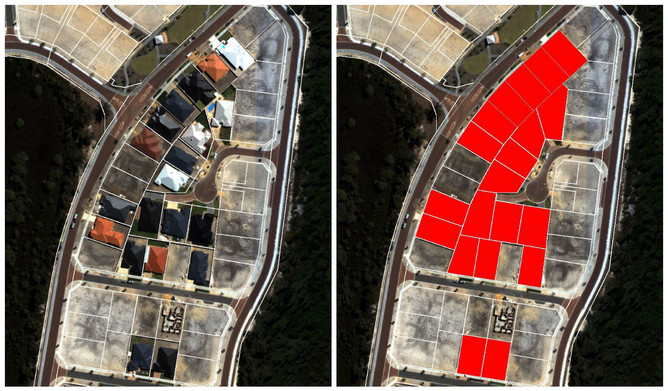 Blocks of land that been built on (marked in red) can easily be identified to monitor urban infill.

6) Drying of groundwater-fed wetlands in the Perth Peel region.

7) The impact of mine or coal seam gas developments on vegetation and runoff. The example below shows predicted flow paths and accumulations of water in a rural landscape after development of coal seam gas sites.

The scale of the imagery is especially suited to local government and mining companies reporting to regulators, as it can help separate mine impacts from climate, fire, grazing or other disturbances.

Readers will probably identify further uses for the method – something that we have experienced whenever we give talks on its application.

In the Greater Perth region, digital acquisition using monitoring standards has replaced analogue capture, so it is routine with limited additional costs for acquisition. Not all datasets have been fully processed but they are archived for later reference as funds and needs arise. The data are expected to become increasingly valuable over time because they cannot be acquired retrospectively.

In time it is anticipated that Urban Monitor products similar to Land Monitor will be made available on the Landgate website. Land Monitor has used interpreted satellite imagery to provide change products to West Australian natural resource management agencies for more than 15 years for an annual cost of about $80,000.

This shows that good monitoring need not be expensive if thoughtful acquisition methods are used and products are developed to meet multiple user needs.