The economics of adaptation: protecting people, prosperity and environment in a warming world

The economics of adaptation: protecting people, prosperity and environment in a warming world

For a long time, people were hesitant to discuss adapting to climate change. Some called it defeatist, others worried it would be used as an excuse to delay action on emissions reduction. That was a long time ago. The science of climate adaptation – developing tools, systems and technologies that improve the ability of communities and businesses to survive and prosper as the climate changes around them – has come a long way.

What emerges from this substantial and growing body of work are four powerful yet simple conclusions:

First: adapting to climate change is about people.

As the world warms, people are exposed to greater levels of risk. The State of the Climate 2014 report, recently released by CSIRO and the Bureau of Meteorology, shows that climate change is here and is happening now . The risk of bushfires has increased. Communities are more exposed to extreme heat. Over the past several years, extreme flooding in Australia has caused incalculable suffering. Without serious action to reduce emissions, these trends will strengthen. Adaptation means protecting people from the impacts already occurring and that we’ll see in future by changing the way we plan, design, and operate the places we live: keeping cities cooler by retaining and enhancing urban tree canopies and greenspaces; building houses to current fire codes; continuing to improve our ability to predict fire weather and provide early warning so communities can prepare; planning housing development to avoid exposed floodplains and retrofitting existing buildings to ensure survivability. Adaptation saves lives.

During the recent Queensland floods, mines were flooded, rail lines washed out, and power disrupted, resulting in hundreds of millions of dollars in lost production. Studies by Stern, Garnaut, and others estimate that climate change, unchecked, will cause economic losses in the billions. CSIRO estimates that by 2070, the value of buildings in Australia exposed to climate-related events will exceed five trillion dollars. But carefully planned and timed adaptation can reduce the damage and cost impact of climate change on businesses and our economy by up to half, and in some cases more. Many businesses in Australia are already starting to plan resilience into their operations, driving down risk levels. But many have not, and remain significantly exposed. Adaptation, properly done, saves money. 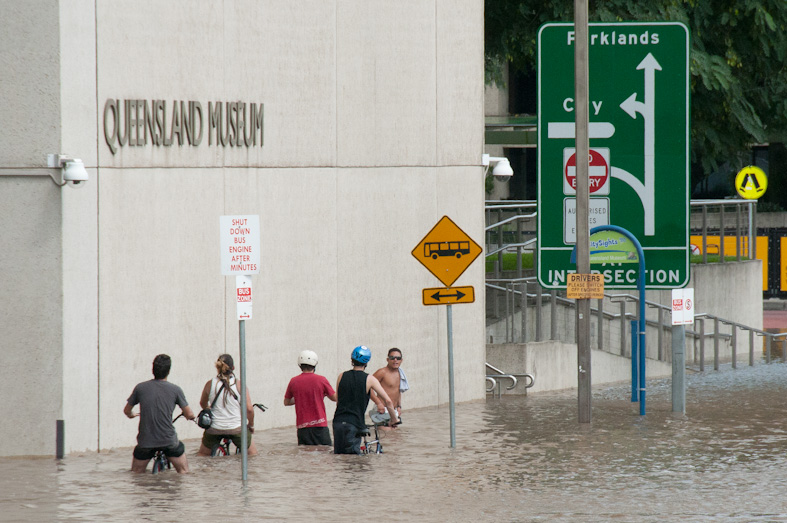 Third: Adaptation is a good deal, but the longer we wait to act, the lower the benefits.

Many of the practical adaptive actions we can do to protect our families, communities and businesses are low cost, and yield significant improvements in resilience. Some adaptation measures, like preserving coastal ecosystems (dunes and mangroves, for instance), protect homes, coastal infrastructure and industry from storm surges and sea-level rise, and cost almost nothing. Building or retrofitting homes to current fire codes costs relatively little, and substantially improves survival rates. Recent CSIRO research shows that protecting buildings from coastal flooding can yield up to $40 in net benefit for each dollar invested. Another study on protecting infrastructure from high winds shows that net benefits of adaptation are large, but drop by half if we wait 20 years to implement. Act early, reap the rewards.

Fourth: There are economic and ecological limits to adaptation.

Adaptation is good news, and compared to the challenge of cutting emissions, much can be achieved quickly and with little fuss. But it is important to recognise that there are limits to what adaptation can do.

There are economic limits. We will exhaust the lowest cost – highest benefit adaptation options first. Dunes and mangroves are great, if you have them, but they can only do so much. As the climatic changes persist and worsen, as is projected, other measures will be needed. Sea walls and tidal barriers can help protect coastal communities from sea-level rise and storms. But they can pose significant engineering challenges, and carry big price tags. In the next few decades, with business-as-usual emissions, the costs of adaptation could start not only to stress the ability of society to pay, but could begin to surpass the cost we would have had to pay to transform our energy systems in the first place.

There are ecological limits, too. While there are things we can do to help reduce the impacts on species and ecosystems, like planning reserves to provide corridors for migration, and transplanting vulnerable species into refuges in new suitable locations, the rates of ecosystem change implied by our current emissions trajectory will leave many creatures behind. Landmark work done by CSIRO predicts that at current emission rates, virtually every native ecosystem in Australia will have been replaced by something else by 2070.

Adaptation makes sense, on a number of levels. Understanding the practical and economic limits of adaptation will help us frame the case for emissions reduction, highlight the risks we face, and show the importance of starting our adaptation journey now.

The Intergovernmental Panel on Climate Change Working Group II released its Fifth Assessment Report on climate change impacts, adaptation and vulnerability today. In this video Dr Mark Howden discusses how CSIRO is developing strategies to help reduce the impacts of climate change on ecosystems and communities:

Previous post:
Investigator’s science office on Level 2
Coming up next:
Shrine of the times