Tassie oysters wear their heart on their shells

Tassie oysters wear their heart on their shells

Whether you prefer your oysters from the rock or the Pacific, served kilpatrick or mignonette, there is one sound which will soon dictate if they are worthy of making it to our plate or not – a heartbeat.

Working together with the University of Tasmania our researchers have developed new bio-sensors that can measure the heartbeat of an oyster. The technology is being trialled as part of Sense-T’s Aquaculture Optimisation Project, which harnesses existing sensor networks and makes information available to the industry through easy-to-use web and phone apps. 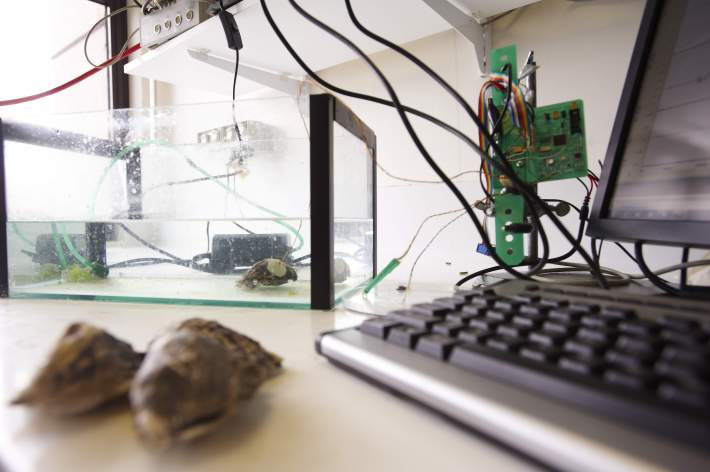 By making a wide range of real-time information available at the click of a button, the technology is helping the aquaculture industry to improve productivity, manage risks and minimise environmental impact.

CSIRO Project Leader John McCulloch says oyster farmers will benefit from this technology because it will allow them to make predictions about what might be happening in the next few days, which is critical for their business processes.

“The project aims to tie a range of environmental sensing, from salinity levels to water conditions together and present it in one place that will allow people to maximise their operations,” he says.

Sarah Andrewartha, a post doctoral scientist with the CSIRO Food Futures Flagship says that in addition to the environmental sensors, the project is bringing animals back into the lab where researchers can simulate a whole lot of different environmental situations and learn about the oyster’s response to those.

“We can put animals into higher or lower temperatures, change salinity and measure the oyster’s response; even irregularities in their heartbeat. This information and the environmental data is combined, so when we put the animals out into the field with these sensors inside them, the farmers can understand what this data means for the oysters and when the right time to move or harvest oysters is,” she says.

As one of the first participants to trial the new technology, Justin Goc, General Manager of Barilla Bay restaurant and oyster farm says the new project has enabled him to overcome some major challenges within the Tasmanian oyster industry.

“The biggest challenge we face is getting a handle on the environment in terms of the temperature, the salinity, freshwater impacts and all those environmental cues that can have major impacts on the growth of the oyster,” he says.

Justin says it is also allowing him to improve his business efficiencies and put better produce on our plates.

“We can incorporate the data collected by the sensors into our computer based management strategy, which enables us to be able to look at how the oysters are growing in any point in time. Combine this with the other environmental data it collects and we have an accurate reading which enables us to be able to grade on time, to harvest on time,” he says.

“It’s allowing us to make decisions based on what the evidence is in the water, as opposed to what we may feel the oysters need.”

As the first state to be fully connected to the National Broadband Network (NBN), the Sense-T project aims to take advantage of the potential benefits of high-speed broadband by creating a world first economy wide sensor network.

Director of Sense-T, Ros Harvey, says the oyster farming web application would be the first of many web and phone apps developed as part of the program.

‘Sensor networks exist everywhere and collect so much information, but we can’t always access it or make sense of it’, she says.

‘Using the speed and coverage of the NBN, Sense-T will bring all that data together in one place and make it available so communities, governments and businesses can make better-informed decisions.’

While the first stage of the Aquaculture Optimisation Project has been initially focused on oyster farming, there are significant applications for the wider aquaculture industry. As our research matures, and further regions become connected to high speed broadband we are hoping to broaden its scope to incorporate other markets such as abalone and salmon farming.

For more information on the sensor network research visit the Intelligent Sensing and Systems Laboratory.

Previous post:
In south-western Australia, water shortages will worsen
Coming up next:
How are vaccines used in Australian agriculture?