Update 1/3/12 – Justin Leonard, the CSIRO scientist involved with the burn, has answered some questions in the comments section.

In the fight between straw and fire, what do you think would come out on top? Yesterday our fire scientists found out when they tried to burn down a house made of straw.

They took an eco-friendly house with ModakBoard cladding, a steel frame and walls insulated with straw and exposed it to a worst case bushfire scenario. Did it survive? Results say, yes it did.

The affectionately named “straw house” was blasted with a range of real life bushfire conditions, from a radiation build up phase to full flame immersion and then a radiation decay phase. 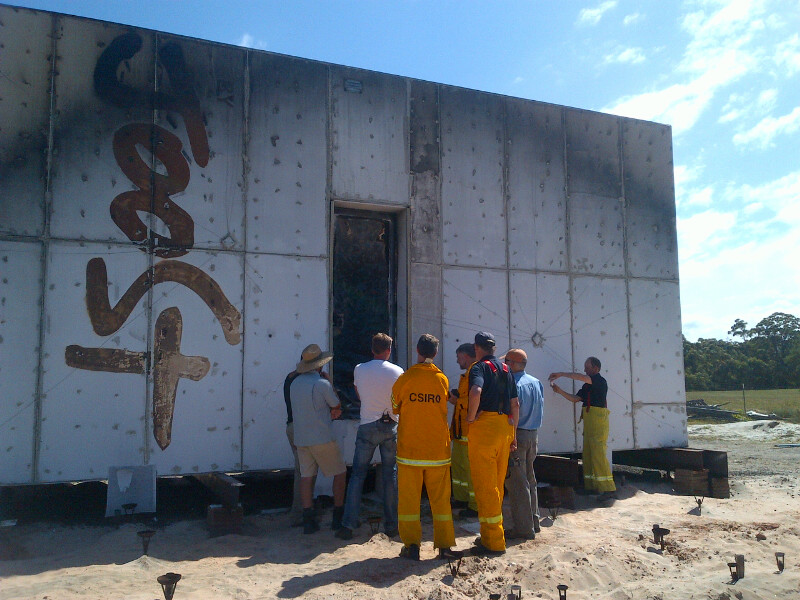 So how did it fair? The external temperature reached a scorching 1000oC while inside the house was a cool 35oC. There was minimal damage to the straw house’s cladding and while the steel frame heated up  to 100–110oC it remained structurally sound and intact. Attached to the house was a about 70–odd sensors that measured what was happening inside and outside the building, so there are plenty more results to be analysed. For now, we know that when exposed to extreme bushfire conditions the little house that could, stood.

Big thanks go out to the New South Wales Rural Fire Service. They let us use the Eurobodalla Rural Fire Service Training Facility near Mogo – the only facility in Australia with a bushfire flame front simulator (pretty much  a giant barbeque) that can test entire buildings under realistic bushfire conditions. Plus they were the only guys who could have put out the fire if the house did go up in flames.