Shooting the moon: the search for ultra high energy neutrinos

Shooting the moon: the search for ultra high energy neutrinos

When looking for evidence of some of the universe's mysterious high energy particles, why not enlist the help of our nearest neighbour: the moon? 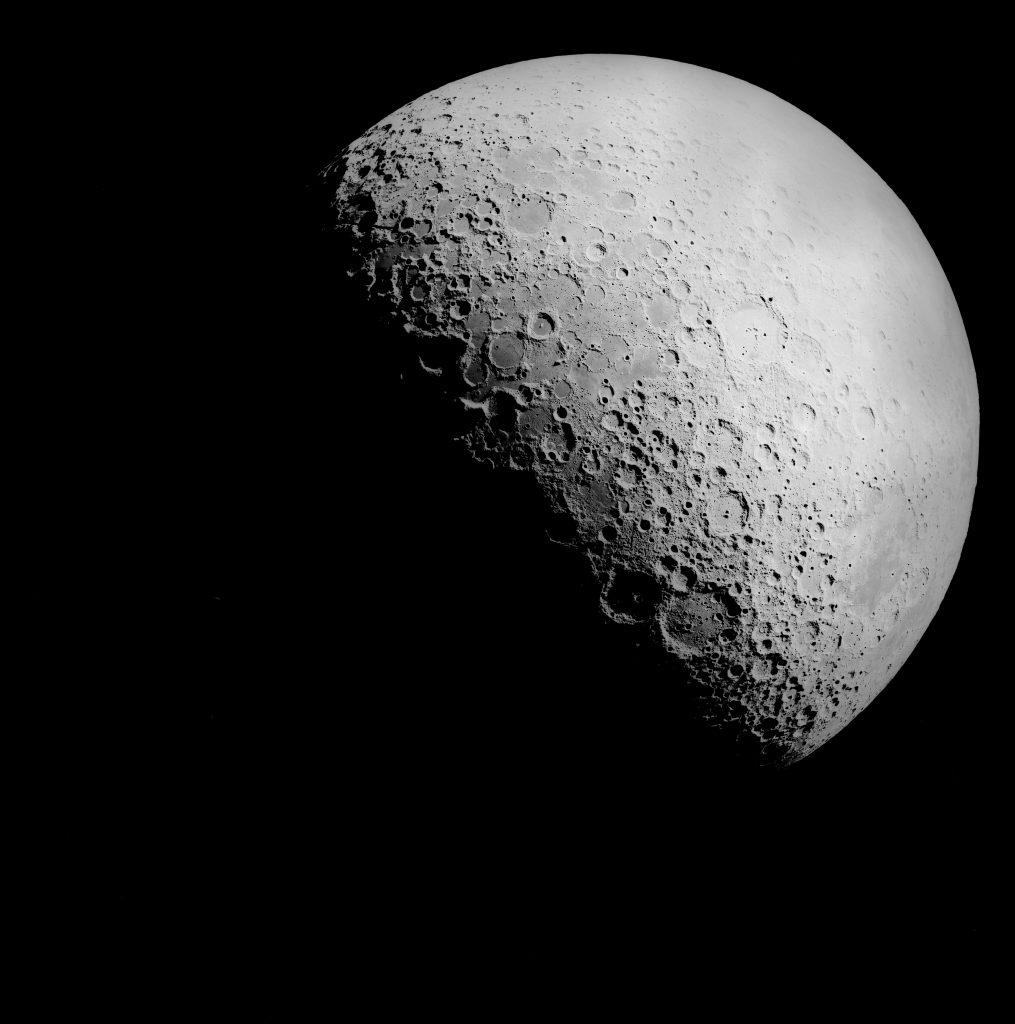 The moon can be used to help in the hunt for high energy particles. Image credit: NASA JSC Electronic Imagery

In 1991 physicists first detected a cosmic ray – a high-energy particle from space – with an energy beyond anything they’d dreamed of. They called it the Oh-My-God particle.

Probably the nucleus of an iron atom, it carried about 3×1020 electron volts (eV), the energy of a well-bowled cricket ball, but this was contained in a single particle. This is also way beyond the energy that the Large Hadron Collider (LHC) can give a particle, which is about 1015eV.

More of these ultra-high-energy particles have been seen in the past 25 years but they are very rare, arriving at a rate of one per square kilometre per century. It’s hard to reach such high energies within our galaxy so the particles probably come from beyond it.

From a place far, far away

Being charged, cosmic-ray particles are deflected as they travel through our galaxy’s magnetic fields, making it difficult to tell where they come from. But we might learn that by studying one of their by-products, neutrinos, which were the focus of this year’s Nobel Prize for Physics.

Cosmic rays with energies beyond 5×1019eV should interact with the photons of the cosmic microwave background, producing high-energy neutrinos. Being uncharged, neutrinos travel in straight lines, and their direction of arrival points back towards their origin.

Neutrinos are interesting in their own right, too, and can be used to test some of the more exotic theories of particle formation in the early universe.

Neutrinos interact very little with other matter. That means they can bring us astronomical information from the most distant reaches of the universe. But it also means that to find them you need a really large detector.

The moon’s a detector

Fortunately, we can use our moon. In 1962 a Russian-Armenian physicist, Gurgen Askaryan, predicted that neutrinos interacting with rocks under the moon’s surface would generate a flash of radio waves lasting just a nanosecond – known as the Askaryan effect – and that this could be detected by a receiver on the moon.

In 1992 two Russians, R Dagkesamanskii and I M Zheleznykh, suggested that you wouldn’t need to put a receiver on the moon, you could just point a ground-based radio telescope at it. 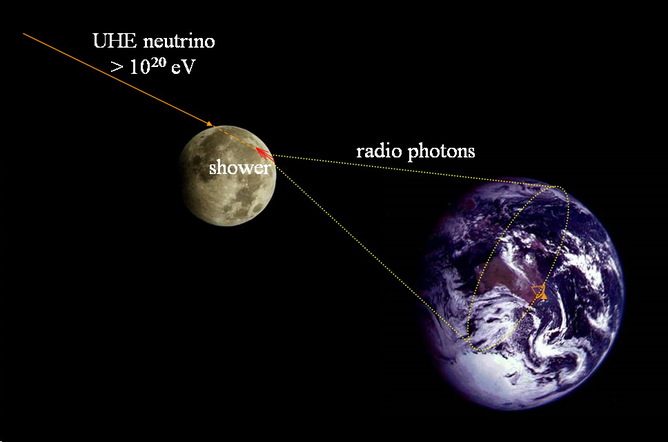 The lunar Askaryan effect: an ultra-high-energy neutrino interacts with the sub-surface rocks of the moon, generating a shower of radio photons that can be detected by a radio telescope on Earth. Ron Ekers, Author provided

When I heard Zheleznykh talk about this in the early 1990s I realised that we could do the experiment – the first of its kind – with CSIRO’s Parkes telescope in New South Wales. I put it together in 1995 with Tim Hankins, a US colleague, and John O’Sullivan, who had led CSIRO’s development of Wi-Fi.

That first experiment gave us a limit rather than any detection, but it also triggered a new interest in using radio observations to study high-energy particles.

Two US researchers ran a second such experiment in the early 2000s, using NASA’s 70-metre antenna at Goldstone in California. This gained a lot of attention but we knew we could do a better one, at least ten times more sensitive. This time we used CSIRO’s Compact Array, a set of six 22-metre dishes in northwest NSW.

The array had a big advantage over Goldstone: it let us distinguish between radio pulses coming from the moon and those from terrestrial signals (radio-frequency interference). But some effort was needed to adapt it for detecting extremely short pulses.

So for our third experiment we decided to try again with Parkes, and use a different way to handle the radio-frequency interference.

Parkes has a radio receiver that lets it see 13 spots on the sky simultaneously. This, plus some technical wizardry from CSIRO engineer Paul Roberts, let us eliminate all the radio-frequency interference: a huge achievement. 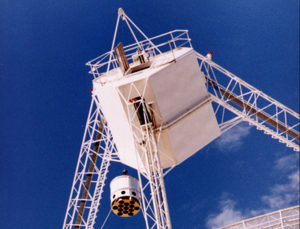 The CSIRO Parkes telescopeâ€™s 13-beam receiver being lifted into the telescopeâ€™s focus cabin. Each of the instrumentâ€™s 13 holes â€˜seesâ€™ a separate spot on the sky.

The CSIRO Parkes telescope’s 13-beam receiver being lifted into the telescope’s focus cabin. Each of the instrument’s 13 holes ‘sees’ a separate spot on the sky. CSIRO, Author provided

We also used the timing signals from the GPS satellites, to measure the density of free electrons in the ionosphere, the upper part of the atmosphere, and even a piezoelectric barbecue lighter which made a radio impulse we used to calibrate signals.

In the past 15 years other research groups had entered the fray, but this second Parkes experiment was three times more sensitive than any previous one of its kind, and we pushed the limit on the flux of ultra-high-energy cosmic neutrinos down to its lowest level.

There’s a lot of wiggle room in the theories of how high-energy neutrinos are produced, but as observations tighten the limits the theorists have to gradually rule out some of their original ideas.

The IceCube experiment in Antarctica recently detected the first high-energy neutrinos from space, but these are still 10,000 times less energetic than the extremely rare ones we have been looking for.

There are other experiments proposed or in train that might find these elusive particles, including a satellite that uses the whole of the atmosphere as its detector.

The coming Square Kilometre Array (SKA) is the obvious instrument to try again to detect the neutrinos and there are discussions about how it could be used in an experiment.

With just a little bit more sensitivity than we had, which you could easily get with the SKA, the hope is that one day we could detect not only neutrinos but also the original cosmic rays interacting with the moon.

Previous post:
A spectacular sunset on Investigator’s last night in Fremantle
Coming up next:
A fine balance: saving Australia’s unique wildlife in a contested land 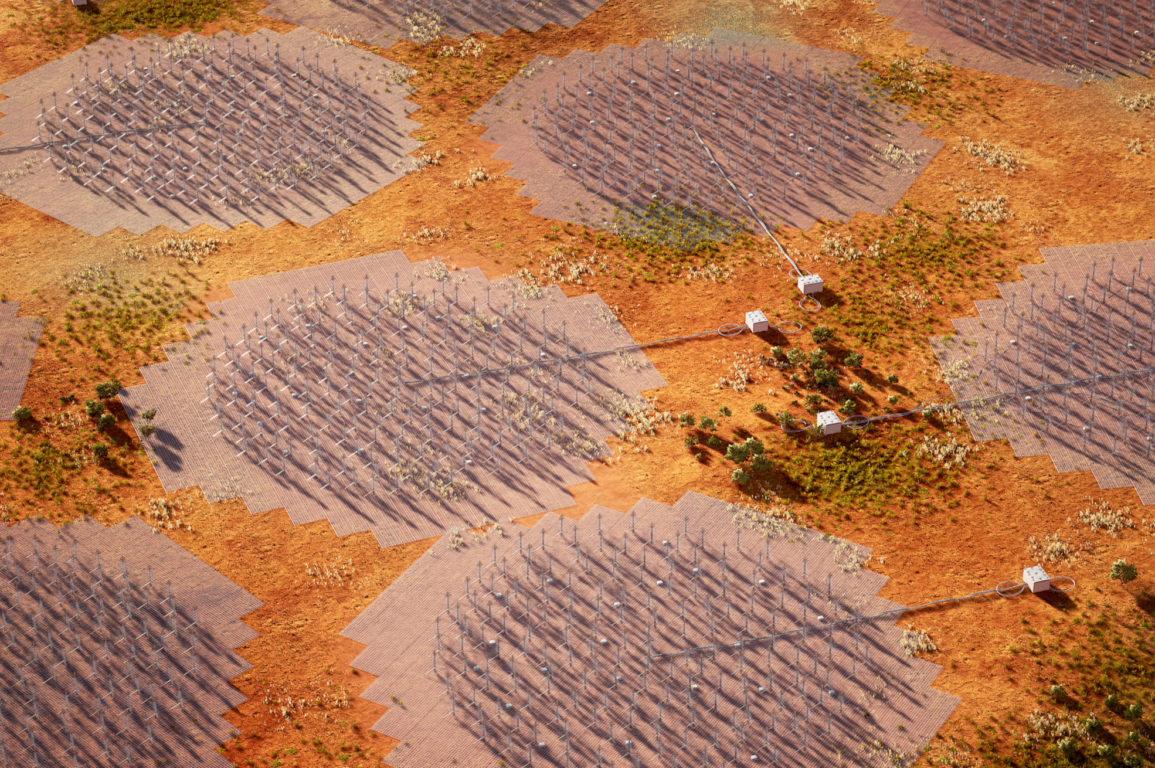