Ship to shore: Our Tassie Business Woman of the Year

Ship to shore: Our Tassie Business Woman of the Year

Our Director of National Collections and Marine Infrastructure (NCMI), Toni Moate, is the Telstra Tasmanian Business Woman of the Year. 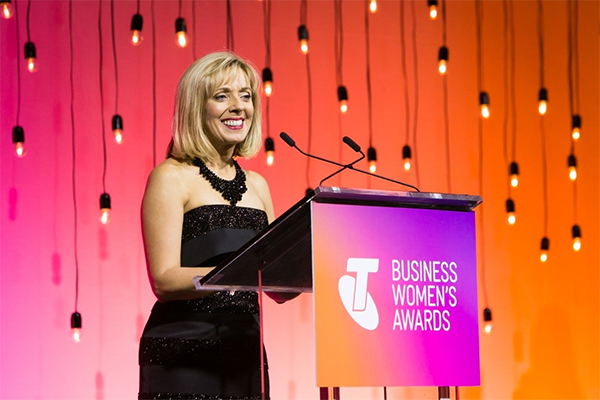 Toni was last month presented both the Telstra Tasmanian Business Woman of the Year Award and the Public Sector and Academia Award.

Our Director of National Collections and Marine Infrastructure (NCMI), Toni Moate, is the Telstra Tasmanian Business Woman of the Year, heading to the National awards night on the 21st of November. We asked Toni how she came to be a Telstra Business Woman award-winner.

‘As I came to a stop on my borrowed pushbike, hundreds of shipyard workers – also on bikes – crossed my path on their way to the lunchroom.  I couldn’t help but wonder: how did I get here?’

‘Here’ was the shipyard in Singapore where we were building our blue-water research vessel back in 2012 – now known as RV Investigator.

And those musings were from Toni Moate, who was on site in her role as the Executive Director of the Future Research Vessel Project.

Toni, who started with us in 1991 as a Project Officer, was last month presented with both the Tasmanian Telstra Business Woman of the Year Award and the Public Sector and Academia Award for her achievements as a business leader, including her work on the massive $120m RV Investigator ship-build project. 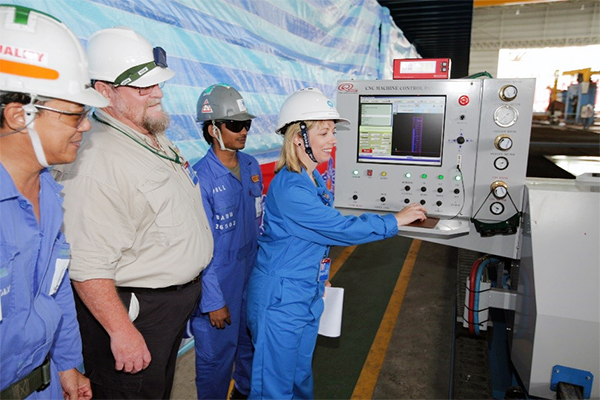 Toni working with the ship-build team at the Singapore shipyard.

Now leading a $44 million business as Director of NCMI, Toni is passionate about sharing her story and encouraging others to take up every opportunity that comes their way.

‘I left school at 16, but by 19, while still working full-time, I enrolled part-time in an Associate Diploma in Business Accounting,’ Toni says.

‘Soon after graduating, I successfully applied for my first position at CSIRO in Hobart as a Project Officer in Finance, providing support and advice to scientists.’

Over the next few years, Toni continued to work full-time and study part-time. She held a range of different roles in the organisation, ranging from finance to personnel, and eventually took on the role of Administration Manager for the Hobart site.

In 1997 the Division of Fisheries merged with Oceanography and, having by now graduated with a Bachelor of Commerce with a double major in accounting and management, Toni was appointed Finance Manager for the new Division of Marine Research. For the next ten years, she remained in the role of Finance Manager and continued her studies, adding to her qualifications.

‘Of course there have been challenges along the way, but my advice to people is to take up new opportunities regardless of the formal structures that may seem to present difficulties,’ Toni says.

‘Look for and find people in the organisation that will support and help you achieve success.

‘There has been enormous change in CSIRO since I started and I have often reflected on what makes a good team and a good leader.

‘Having a positive ‘can-do’ attitude can help you overcome many hurdles.’

Since 2007, Toni has been operating in upper management positions at CSIRO. Toni says although these roles can be difficult, they are also rewarding.

‘One of the most rewarding moments was when I stood beside [former] CE Megan Clark in Hobart and cracked a bottle of champagne over the hull of our brand new RV Investigator,’ Toni says.

‘Receiving Telstra’s Tasmanian Business Woman of the Year Award was a great honour – mostly because it presents me an opportunity to share the great work being enabled by a wide range of facilities and research infrastructure that we manage on behalf of Australia.

‘It also gives me a chance to acknowledge the wonderful and dedicated people and teams I’ve had the pleasure to work with over many years.’

Interested in learning about RV Investigator, the research vessel Toni helped see to the seas?

Previous post:
Want to eat more veggies? There’s an app for that
Coming up next:
Rare spider orchid tangos with pollinator