Science in lockdown: monitoring our sea animals during the pandemic

Science in lockdown: monitoring our sea animals during the pandemic

What does science during a lockdown look like? Our researchers are still checking in on their ocean animal friends during the pandemic.

Little Penguins run wild in a town on the east coast of Tasmania. Our science is trying to find out how many there are.

On the east coast of Tasmania in a town called Bicheno, Little Penguins run wild. Colonies of Little Penguins treat the residents’ properties as their own. And that can be risky. They can nest under wheelie bins, flowerpots, wood-piles and dig cavernous burrows in the garden. So, a few years ago, our researcher Cathy Bulman and her husband decided to build them their own homes in their garden. Now, families of Little Penguins live in wooden boxes in Cathy’s front yard.

Cathy works in our Oceans and Atmosphere team on a threatened endangered species project. Part of this involves getting the local community groups to monitor the Little Penguin population in Tasmania.

“We know very little in terms of the current size of the Little Penguin population. My whole involvement in the project came about because we don’t have a proper estimate of Tasmanian penguins. And for a lot of the ecosystem modelling work we do, it would be beneficial to have that information,” Cathy said.

So what did Cathy’s science in lockdown look like? Cathy got to spend three months in Bicheno when she would have otherwise been in the office. She had the chance to monitor the colony and collect more data. And to her delight, she found a gem.

“This year we had our first confirmed cases of winter breeding in Bicheno. I’ve suspected it for a while but this is the first year we’re able to confirm it. So far, we’ve had four chicks from two new nest boxes and one from the original box. This means we’re starting to learn a little bit more about the east coast population,” she said.

One of the new houses that Cathy and her husband built for their Little Penguin families.

Another monitoring method Cathy and the local community groups used during the pandemic lockdown was footprint surveys. It’s exactly what it sounds like – counting the tiny footprints of the penguins.

“At the beginning of the year, I got together some of the Friends of Bicheno Penguin group to trial the footprint survey method here. This is where we go down to the beach in the morning at low tide and count penguin footprints coming and going during the previous night,” Cathy said.

“We do this to get a relative index of how many birds are resident in the colony. It was steep learning curve for all of us. It did give us a pretty good feel for what we could and couldn’t do.

“While I was in lockdown, I continued to do footprint surveys on my morning walks. It was very clear the birds were becoming more active in the colony over autumn leading up-to what we now know was a winter breeding for some pairs,” she said.

These surveys are going into a database for Cathy’s project along with a lot of historical and current data collected by other researchers around the state. The COVID-19 restrictions have allowed us to add to our knowledge base in an unexpected way.

Another example of continuing science in lockdown is Tonya Van Der Velde and Gary Fry. They usually head to the Gulf of Carpentaria every two years to do the Northern Prawn Fishery spawning stock monitoring survey. The survey started in 2002 and provides fishery-independent estimates of prawn abundance and distribution. The data is incorporated into the stock assessment which improves the forecasts for sustainable fishing.

This field work was classed as high priority and couldn’t be missed. Given the current restrictions and risks for air travel, if the work was to go ahead, it had to run a little differently in 2020.

They gained special approval given the circumstances and the distance. A few more things had to fall in place to conduct this research during a pandemic. Permission to enter the Shire of Carpentaria, which is an Indigenous shire, a driving plan and a contingency plan to staff the survey in case they didn’t make it all the way.

But Tonya said they weren’t worried. 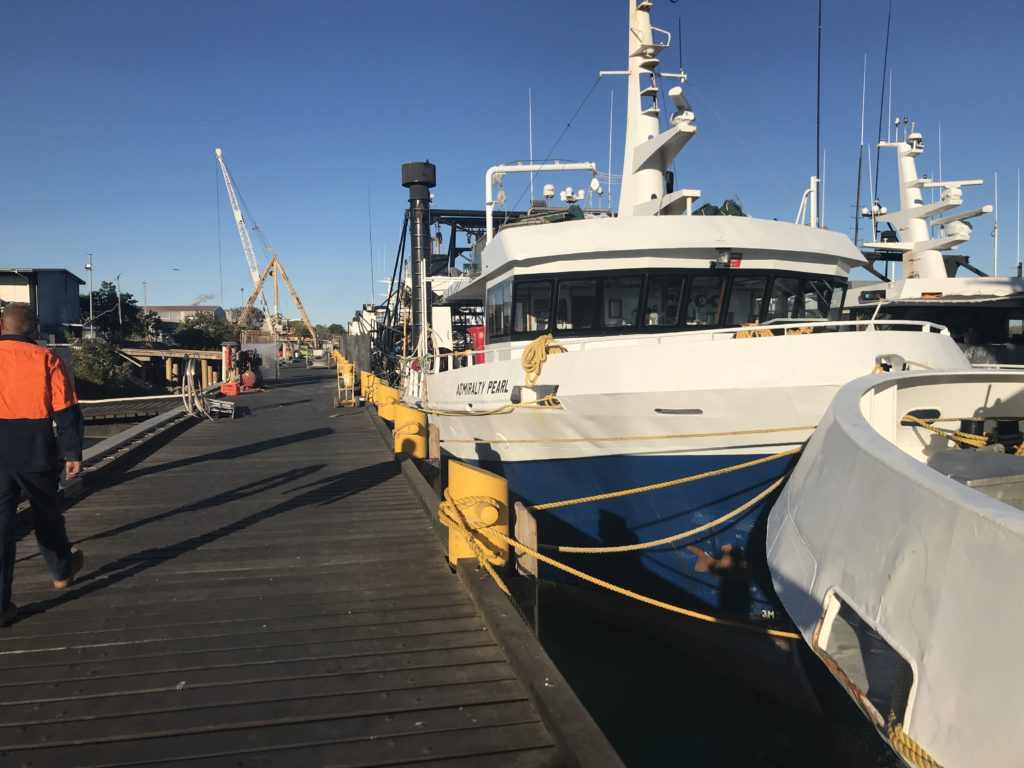 The fishing trawler that Tonya and Gary used for their research.

“We’re both conditioned to drive long distances (Queensland is a big state) and we’re really invested in getting the survey done to maintain the continuity of the data series,” Tonya said.

“Once we got to Karumba the survey went ahead as normal. Gary and I have worked together for 25 years so we know each other’s work style. We have both conducted extensive field surveys, we didn’t bug each other in the car. We know what each can tolerate and we also had good music playing on a long playlist,” she said.

Completing this critical research that underpins sustainability of the fishery gained high praise from industry and management. It highlighted the dedication and passion of our people to keep up their science in lockdown. It also shows the impact the pandemic has on all sorts of people and their jobs.

Take a look at some of other deep blue research including our recent discoveries from Ningaloo Reef.

Dive into our more of our ocean research

Previous post:
Busting white shark myths with science
Coming up next:
What shapes our science? Our people