New growth from record-breaking rains across Australia turned it into a giant green carbon sink to rival tropical rainforests including the Amazon.

Record-breaking rains triggered so much new growth across Australia that the continent turned into a giant green carbon sink to rival tropical rainforests including the Amazon, our new research shows. 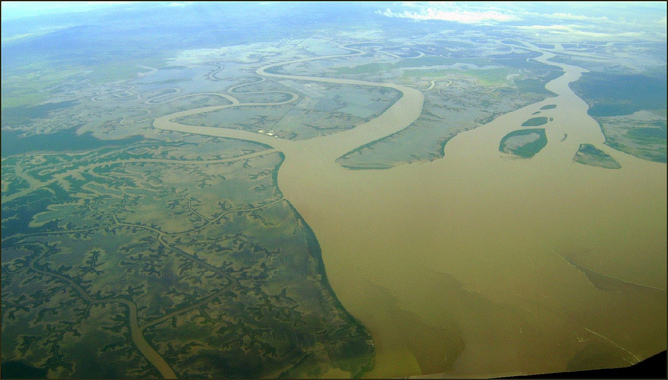 Published in the international journal Nature, our study found that vegetation worldwide soaked up 4.1 billion tons of carbon in 2011 – the equivalent of more than 40% of emissions from burning fossil fuels that year. 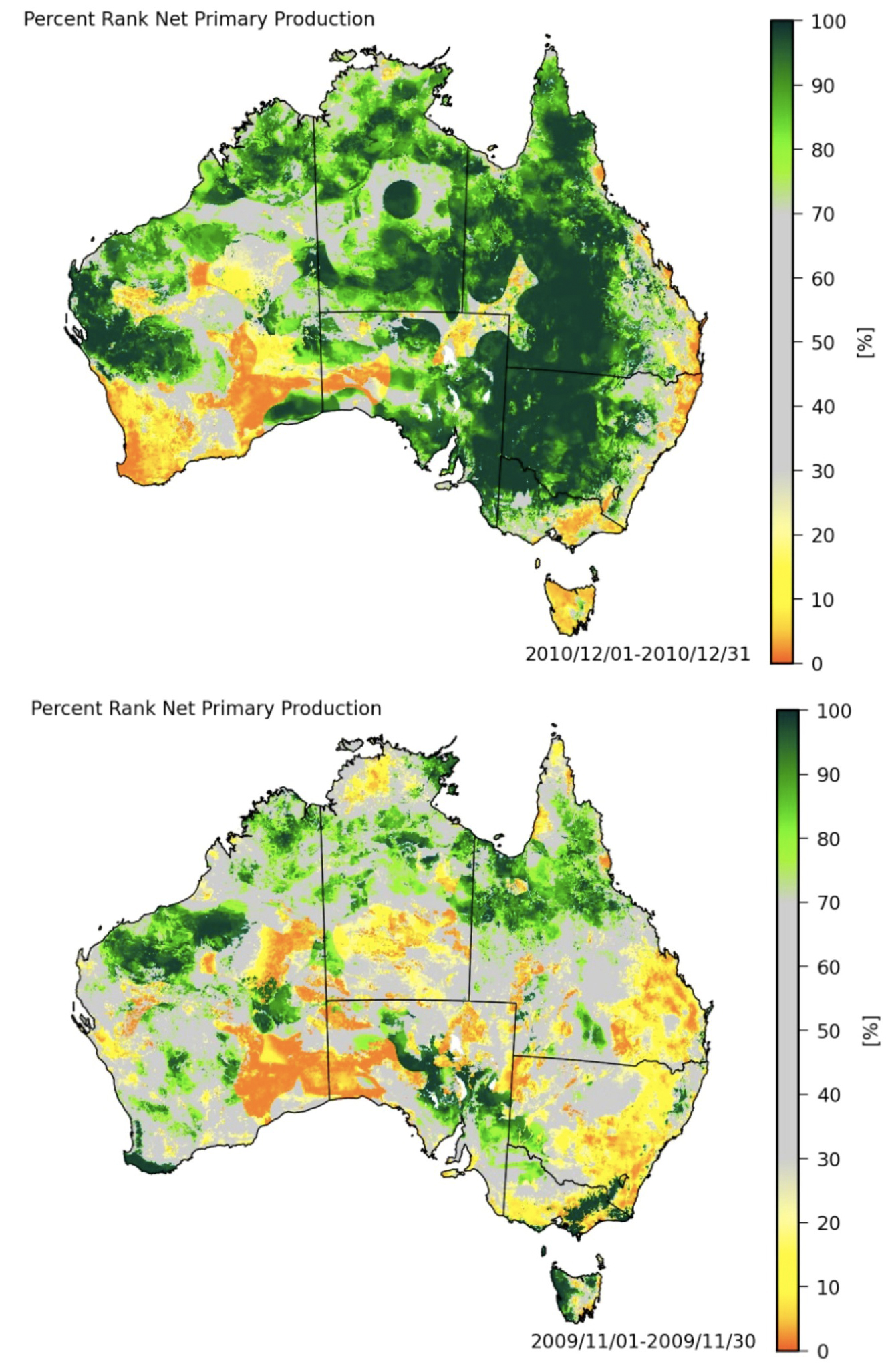 The modelled net carbon uptake of the Australian landscape in December 2010 at the start of the big wet (top), compared with December 2009 (bottom).

It set a new record for a land-based carbon sink since high-resolution records began in 1958, in a remarkable example of ecosystems working to stabilise the Earth’s climate.

And that had a global impact. While atmospheric carbon dioxide still rose in 2011, it grew at a much lower rate – nearly 20% lower – than the average growth over the previous decade.

Almost 60% of the higher than normal carbon uptake that year, or 840 million tons, happened in Australia. That was due to a combination of factors, including geography and a run of very dry years, followed by record-breaking rains in 2010 and 2011.

Yet our research raises as many questions as it answers – in particular, about whether the Earth’s natural climate control mechanisms could prove even more volatile than previously thought.

The rain that made the world’s ocean fall

From October 2010 to March 2011, an extraordinary rainfall event occurred over most of Australia, which resulted in three-quarters of Queensland being declared a flood disaster zone – an area as big as France, Germany and Italy combined. 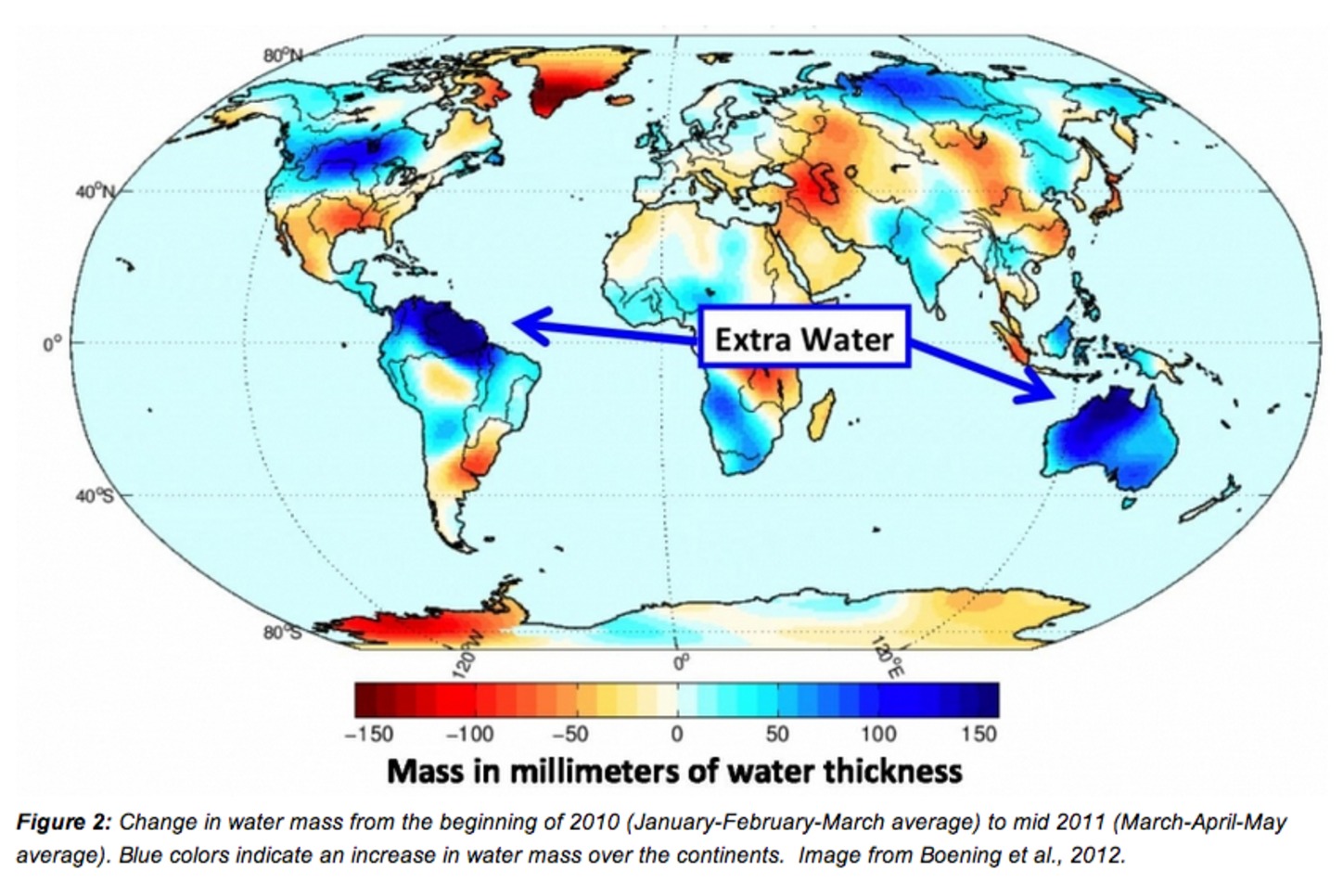 Excess rain reached most parts of the continent, in what proved to be the wettest two years combined since national climate records began in 1900.

Queensland was the worst affected area, with 35 people killed in floods that broke more than 100 river height records, and damaged 30,000 homes and businesses in cities and towns including Brisbane, Ipswich and Toowoomba. (You can see ABC News images of Brisbane before and after the floods here.)

The big rainfall event was part of a global phenomenon called the El Niño Southern Oscillation (ENSO), which reflects atmospheric pressure changes across the tropical Pacific Ocean, in its La Niña phase.

It brought above-average rainfall not only to Australia but also to other parts of the world, particularly in southern Africa and northern South America.

The power of La Niña to evaporate water from the oceans was boosted by the ongoing high sea-surface temperatures that are part of a long-term trend of ocean warming. That trend has been shown to be associated with the release of greenhouse gases from the combustion of fossil fuels and deforestation. 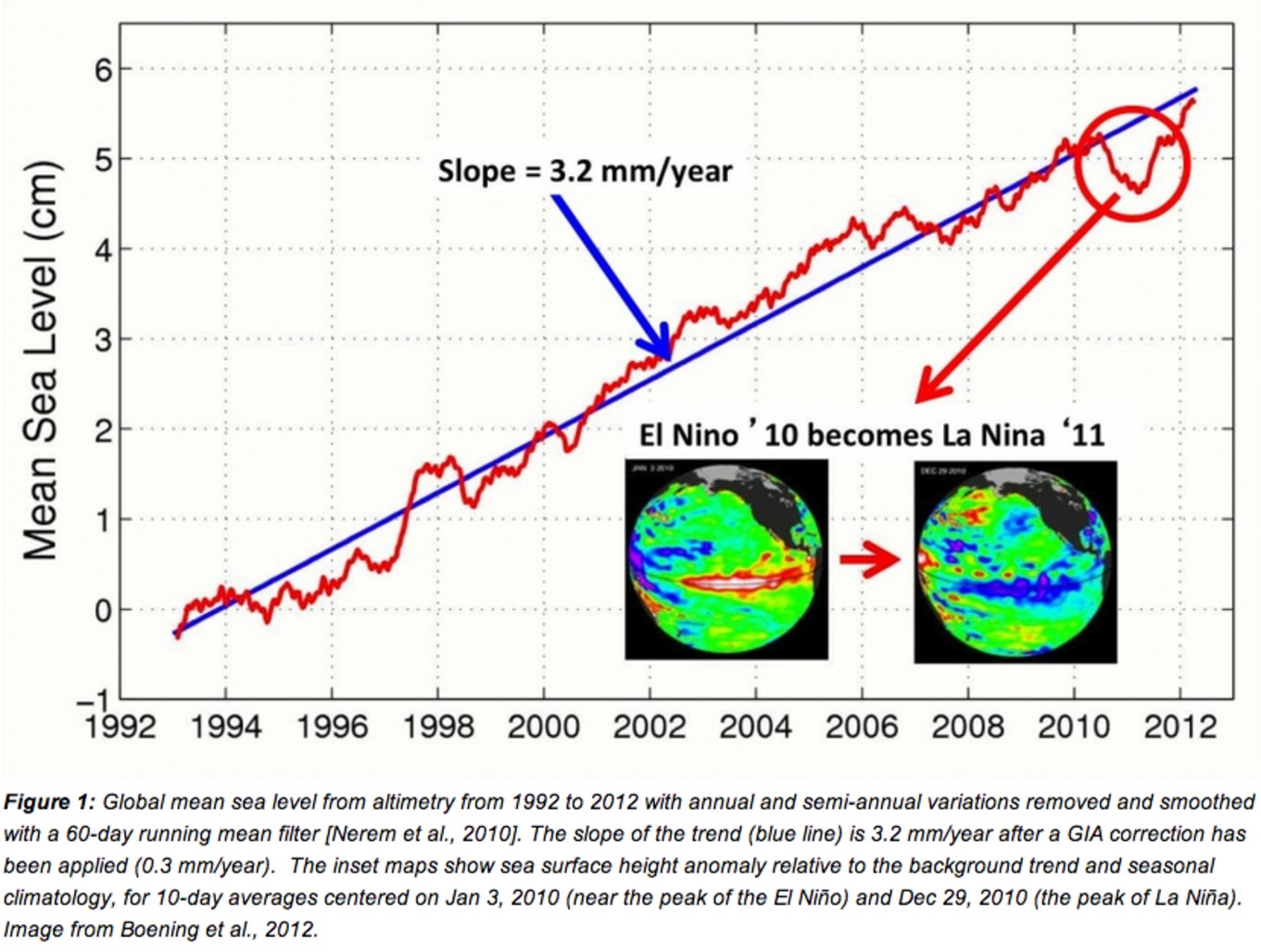 This massive rain event was so significant that sensors on-board the twin satellites GRACE estimated a decrease in ocean water mass of 1.8 trillion tons. That remarkable finding was measured by changes in the Earth’s gravitational field, brought about by the transfer of water from the ocean to the atmosphere and land surface.

This made the ocean’s sea level fall by 5 millimetres from the beginning of 2010 to mid-2011, going against the average sea-level rise of 3mm a year over the previous 18 years associated with global warming.

Australia played a major role in this sea-level fall, for several reasons. It was partly due to vast amounts of rain that fell over Australia. The continent’s hydrological characteristics also played a role, with large impediments for rainfall to flow quickly back to the ocean, such as the large continental interior basins.

And Australia was a country in need of a big drink. The parched continent was emerging from a multi-year drought, particularly in the south-east region, meaning the land acted as a huge sponge, soaking up the heavy rainfall.

Seeing the Earth change colour from above 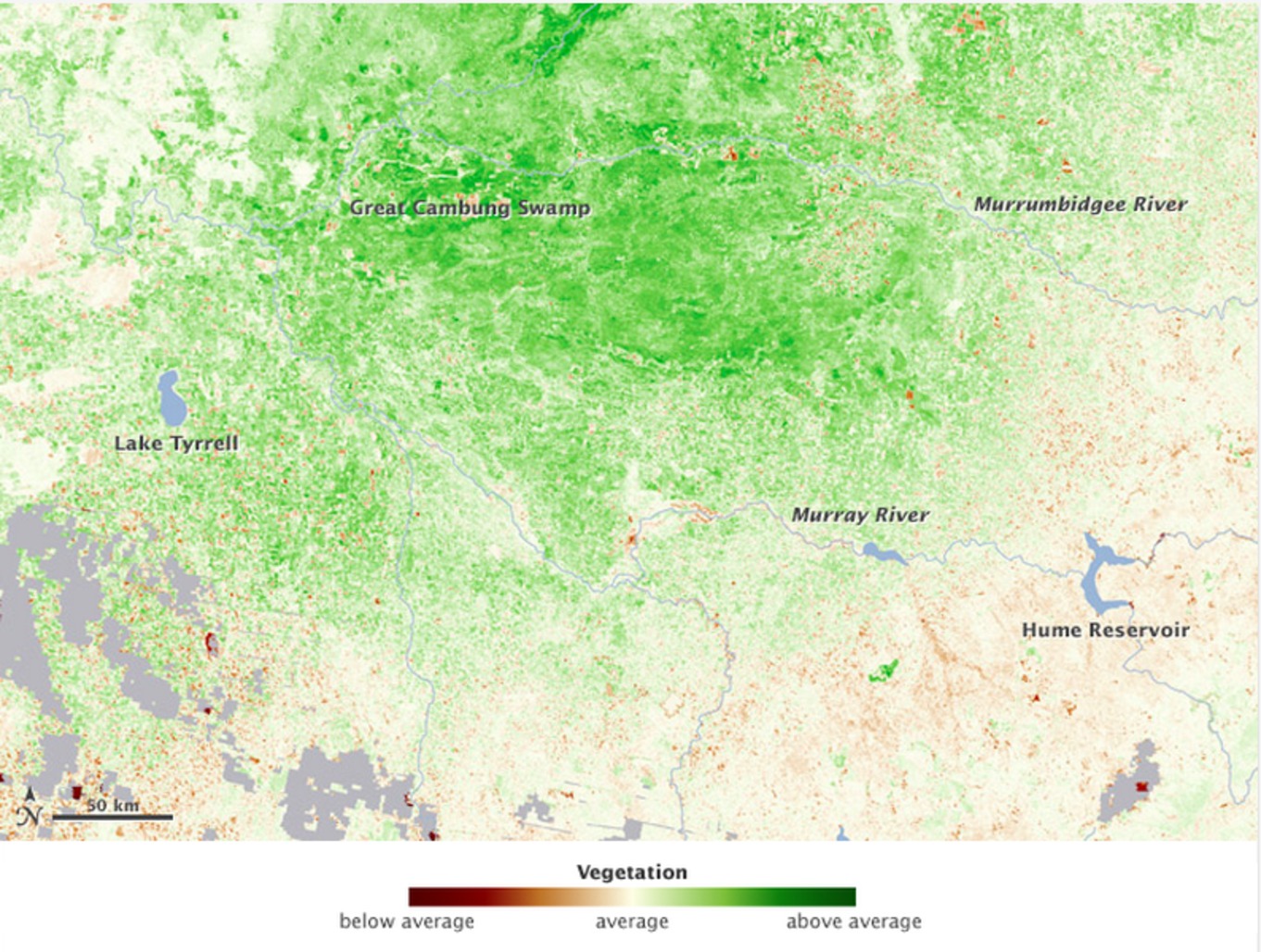 As a result of the unusually heavy rains, the Earth’s vegetation “greened” in 2011 in ways not measured over the previous 30 years, particularly in the Southern Hemisphere dryland ecosystems.

This global greening was detected by satellites, which observed increases in canopy foliage extent and vegetation water content, which both imply vegetation growth.

Combined, these measurements indicated that the world’s annual production of new plant matter significantly increased in 2011 when compared to the previous decade.

Regions in the Southern Hemisphere including Australia, southern Africa, and temperate South America contributed 80% of the change, especially their savannas and other semi-arid areas.

That winter, June to August 2011, Australia was the greenest that it has ever been seen in the satellite period (since 1982).

Our new study in Nature also shows how fire emissions – normally a big factor in reducing Australia’s capacity to store carbon – were suppressed by about 30%, contributing even further to the continent’s greening. 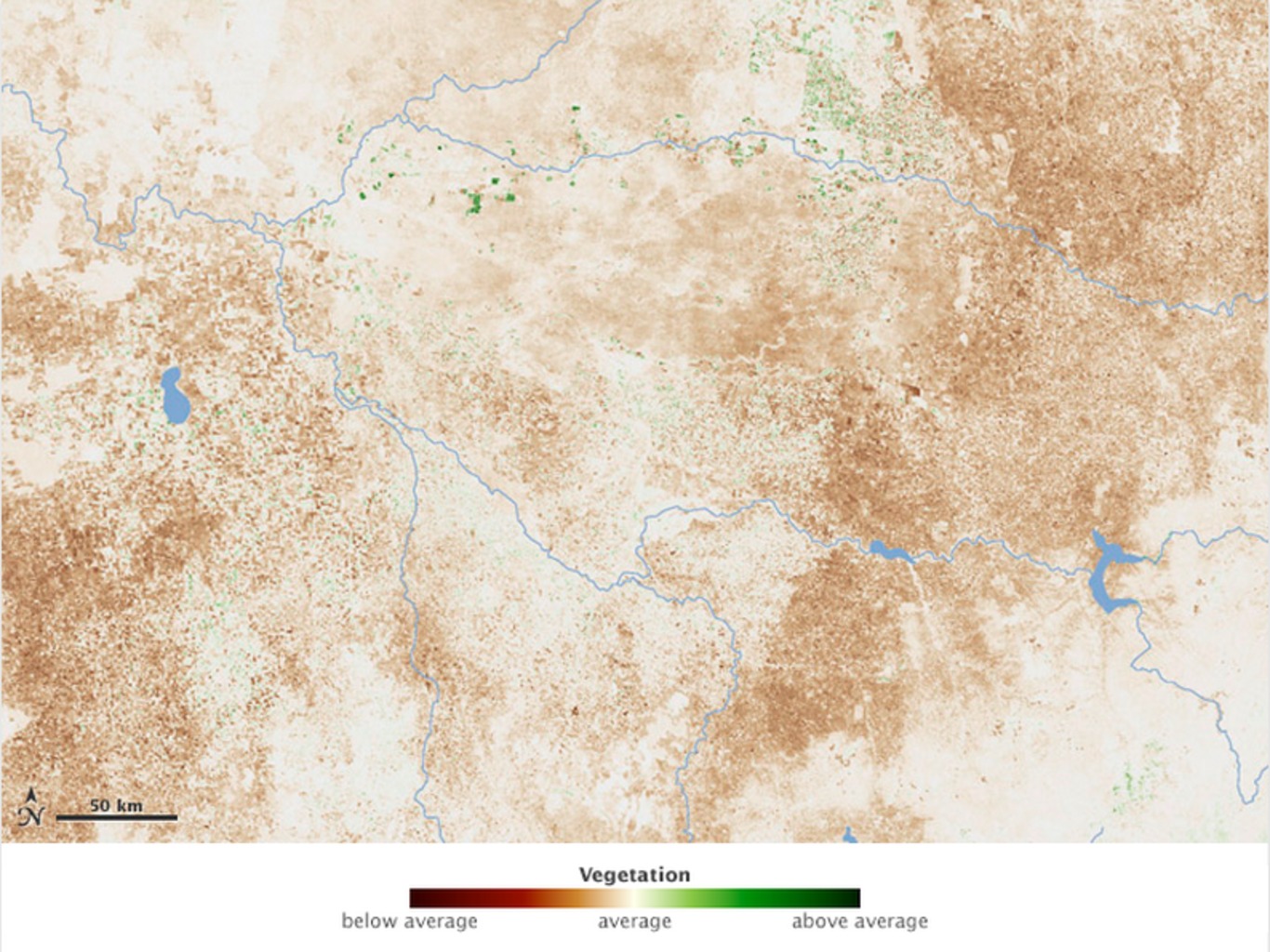 The same region in September 2006. This and the image above show how growing conditions compared to average mid-September conditions over 2000 to 2011. See more images here: http://1.usa.gov/RSMka6 Image: NASA, CC BY-NC-ND

In addition to the unprecedented vegetation greening of Australia during 2010 and 2011, we also observe a greening trend over the continent since 1980s, particularly during the months of the Australian autumn (March, April, and May).

That has happened for a number of reasons, including increased continental rainfall over the past few decades; plants growing in an atmosphere with increasing carbon dioxide using water more efficiently; and changes in land management such as fire suppression, expansion of invasive species, and changes in livestock grazing that have led to more woodland.

The upsides of going green

Despite recurrent drought conditions in some regions, there is a current greening trend over Australia.

Overall, satellites show Australian landscapes are greener now than they have been over the past 30 years.

A greener Australia has a number of environmental and other benefits, including better protection for soils, increased soil-water holding capacity and soil fertility, and more plant feed to sustain larger animal populations.

However, more vegetation can lead to less water being available to replenish water tables and feed rivers, even though Australia loses more than 50% of all the rainfall to the atmosphere as soil evaporation, without contributing to vegetation growth.

This is in sharp contrast to temperate and tropical ecosystems, where a large part of the water is returned to the atmosphere via vegetation.

However, we now need to consider whether this growing accumulation of carbon in semi-arid regions of the Southern Hemisphere could become a future climate liability through fire and drought. 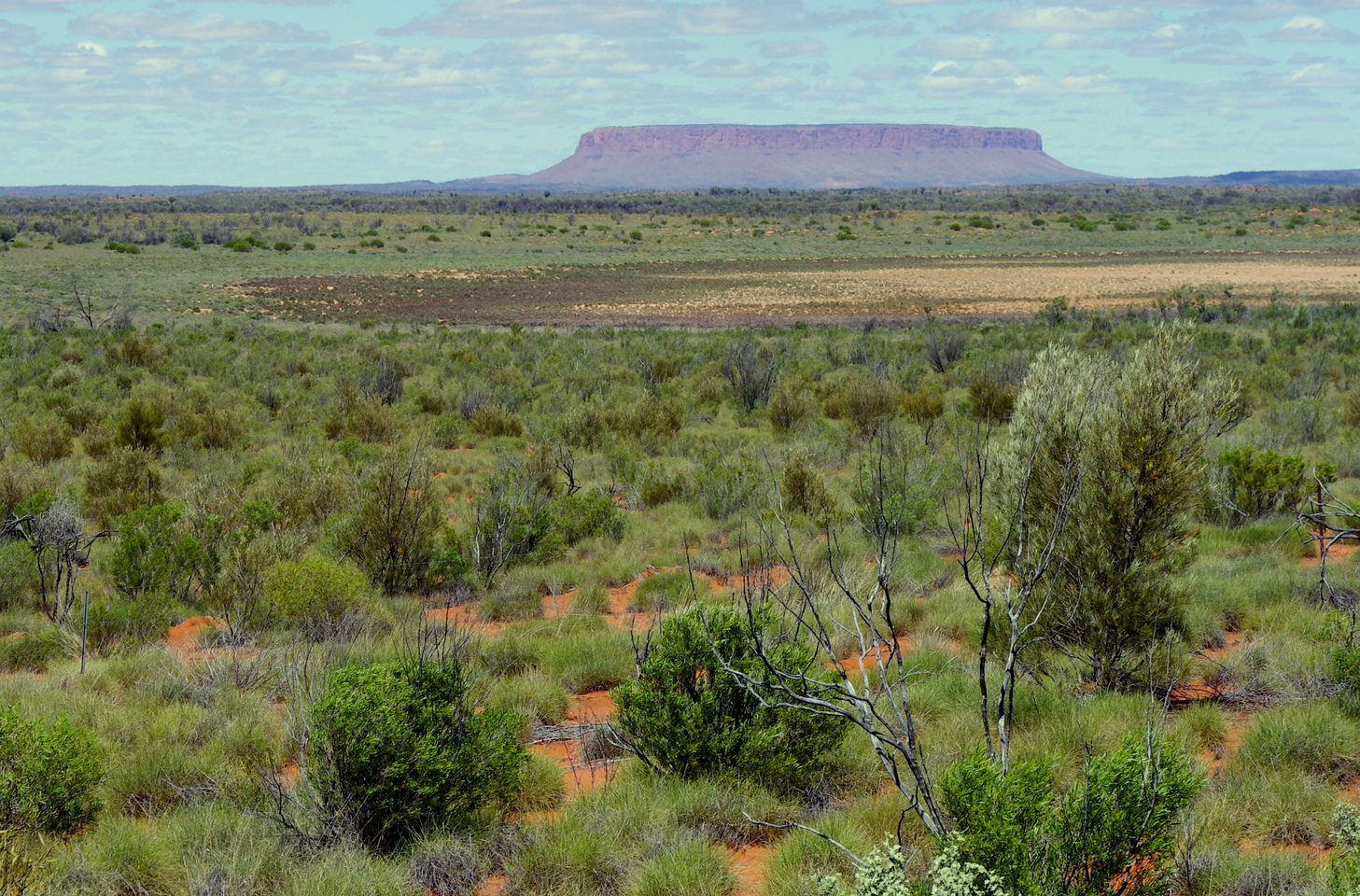 Land and ocean carbon sinks absorb around half of the world’s emissions from burning fossil fuels each year, which helps to slow the rise of atmospheric carbon dioxide concentrations from human activities.

The Intergovernmental Panel on Climate Change’s Fifth Assessment Report found that we are likely to see an increase in climate variability that includes drier, more fire-prone conditions across large parts of the Southern Hemisphere’s semi-arid regions, including Australia.

That’s a vital trend to consider, because it could lead to a more vulnerable global carbon reservoir.

While we might see more carbon stored in new vegetation growth and soil when extra water is available in semi-arid regions, as happened in 2010-2011, the risk is that more fires and droughts would end up rapidly releasing that carbon back to the atmosphere.

It is likely that the large carbon uptake during 2011 was short-lived, as suggested by a rapid decline of the sink strength in 2012. Future research will be able to confirm if this was the case.

Arid and semi-arid regions currently occupy 40% of the world’s land area. More work is urgently needed to research the best ways to manage these areas, and whether we can increase their soil and vegetation carbon stores as part of our climate mitigation efforts.

While tropical forests like the Amazon remain vitally important as major carbon sinks, this new study and others indicate that semi-arid regions like Australia will also play a growing role in the Earth’s carbon cycle.

Increasingly, semi-arid regions are driving variability in how much carbon dioxide remains in the Earth’s atmosphere each year. And that has major implications for the long-term, including whether future climate change will slow down or accelerate further.

Previous post:
Share the Universe in a Box
Coming up next:
Beer tasting with a cyber tongue