Our PULSE@Parkes in Japan tour wrapped up last week with a visit on Monday 26 May to Miraikan, the National Museum for Emerging Science and Innovation in Tokyo. On the weekend of 25 – 26 May we were hosted by Koriyama Space Park in Fukushima Prefecture for our observing sessions. 40 students from five schools participated over the two days. Koriyama Space Park is in the Guinness Book of Records as having the highest planetarium above ground level in the world – 23 stories up! 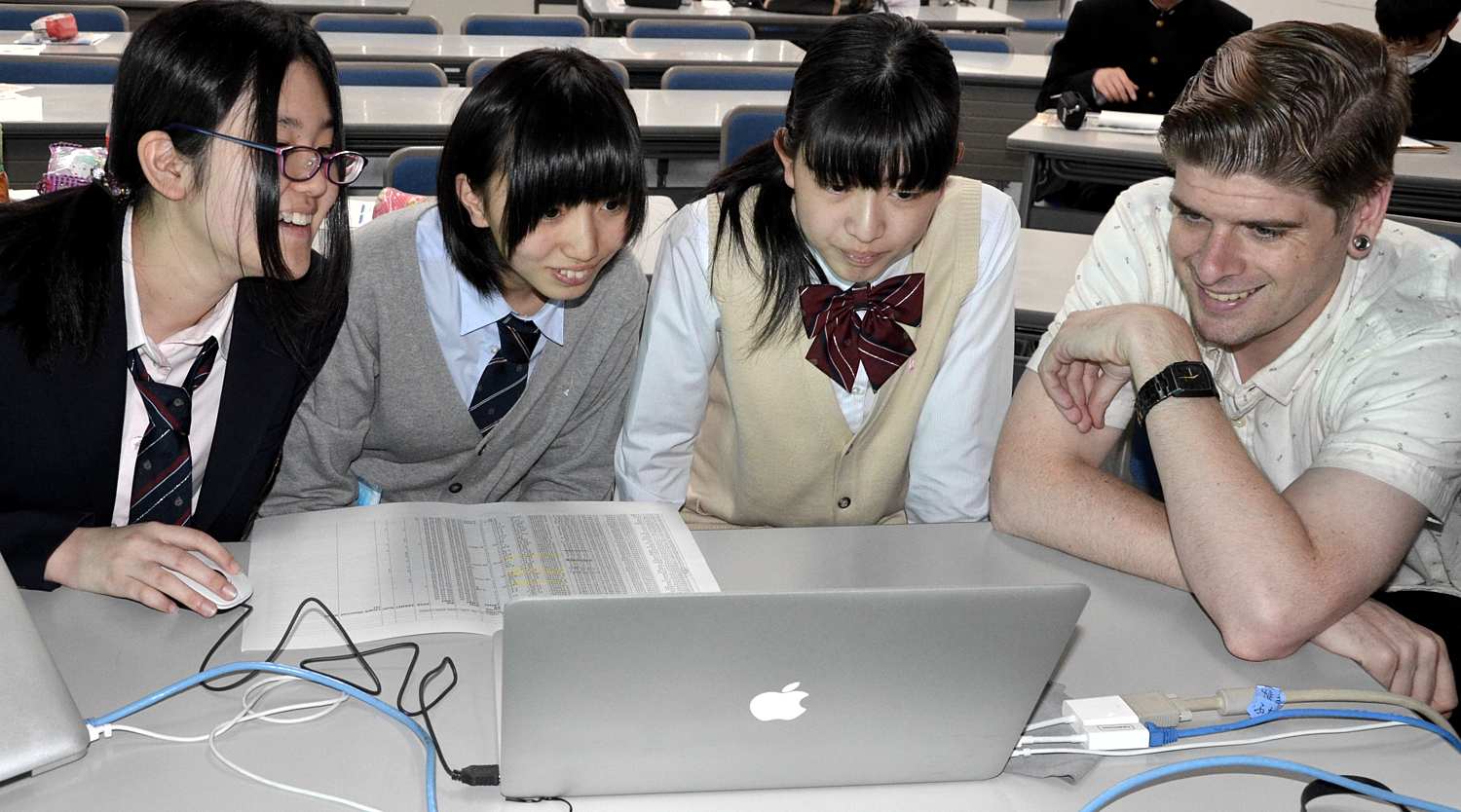 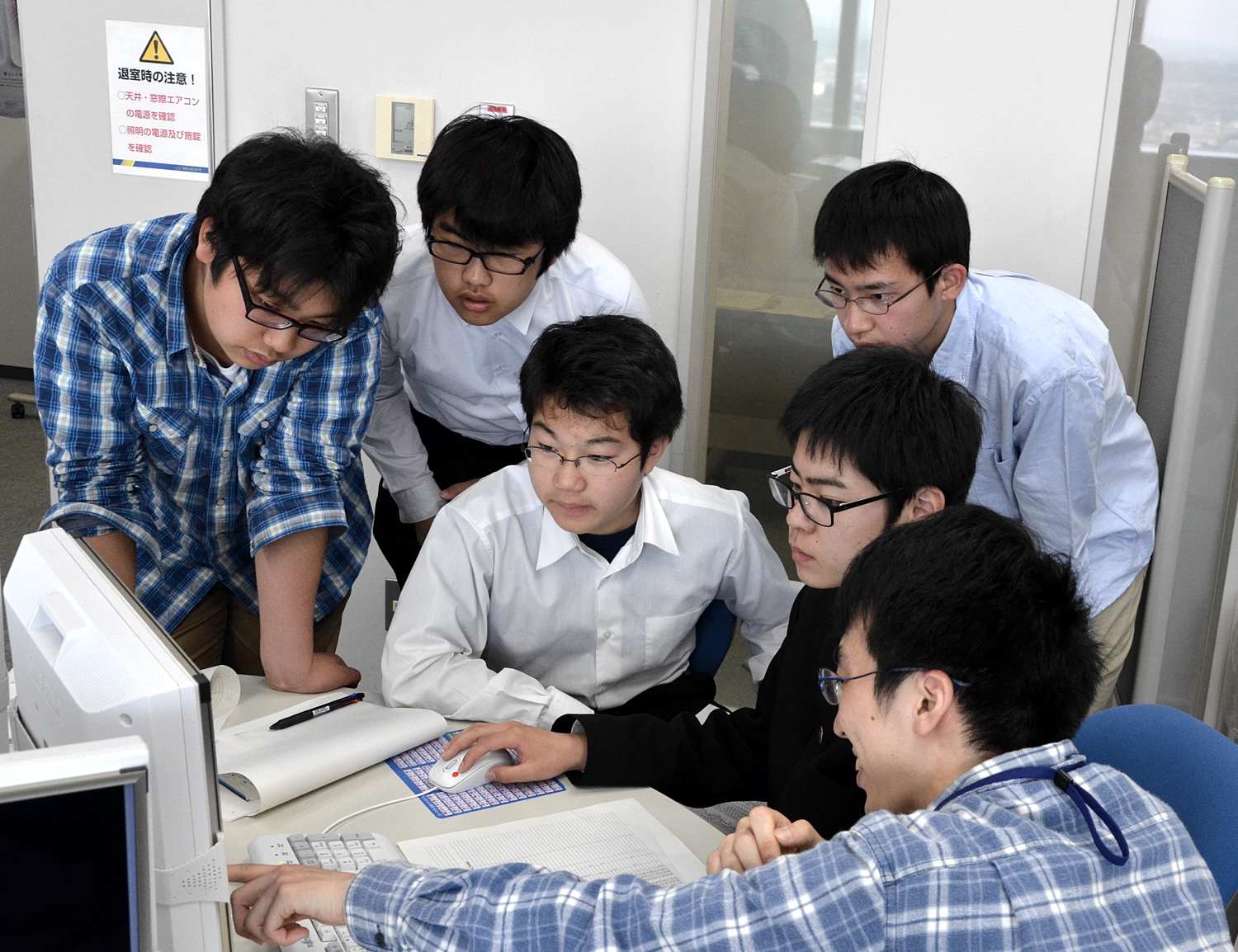 In the week between the observing sessions at NAOJ Mizusawa VLBI Observatory and Koriyama Space Park team members Dr Ryan Shannon and Robert Hollow visited several institutions.The Kashima Space Technology Center, two hours from central Tokyo on the coast. They toured  the Museum of Space Communications there then explored the 34m antenna after presenting seminars to staff. 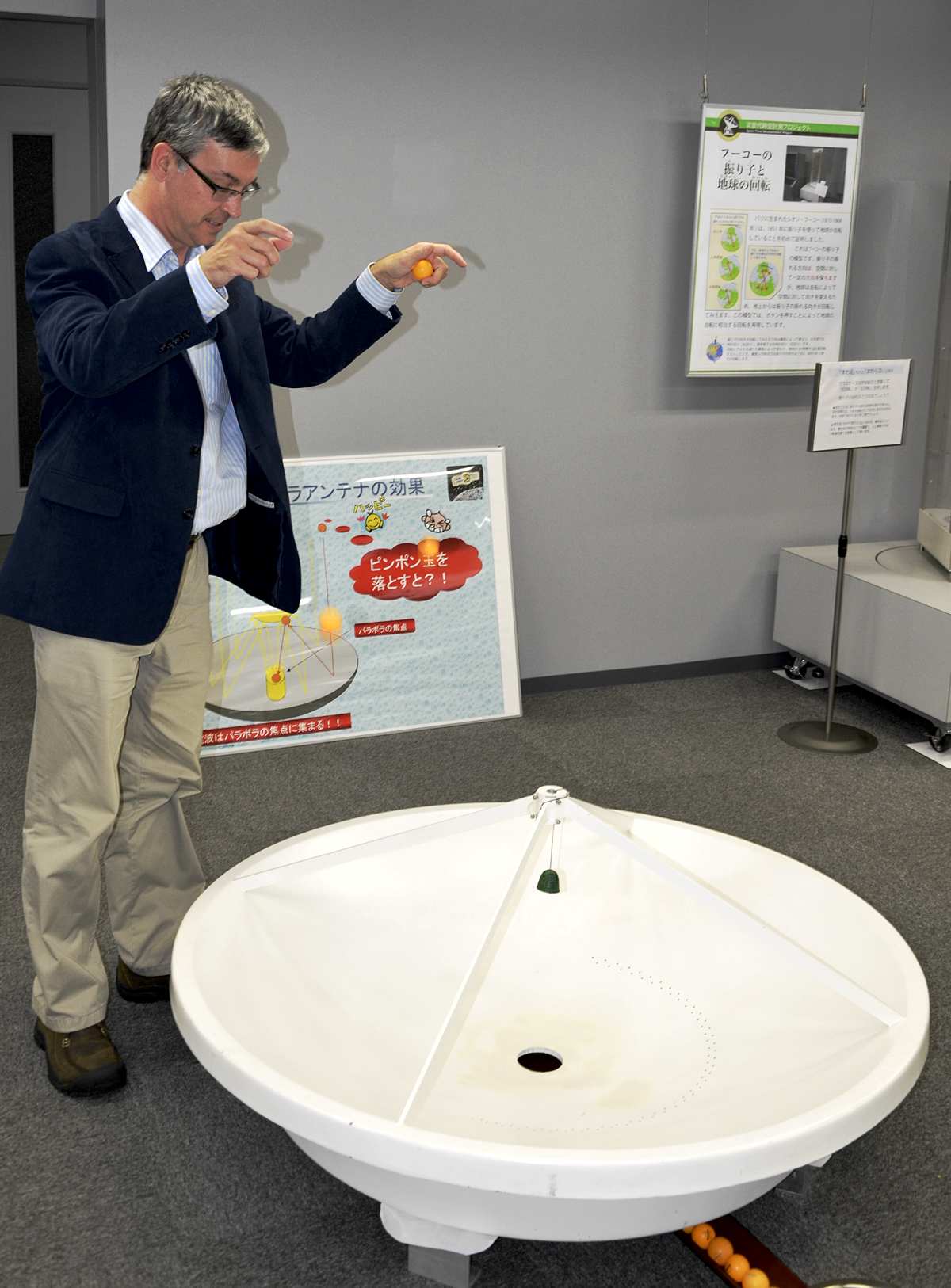 Rob Hollow testing reflection in a parabolic dish in the Museum of Space Communication at the Kashima Space Technology Center.

Rob Hollow testing reflection in a parabolic dish in the Museum of Space Communication at the Kashima Space Technology Center.

At the Japanese Aerospace Exploration Agency, JAXA campus at Sagimihara in the Tokyo region, our team met with the JAXA Education team, gave seminars on pulsar science and CASS outreach activities and got a behind-the-scenes tour of the Environment Test Building where spacecraft are assembled. We were able to see the Sprint-A space telescope being assembled and a sounding rocket being tested on a vibration bed but no photos were allowed unfortunately. A three-hour Shinkansen ride north of Tokyo took us to Yamagata University, nestled next to forested hills and snow-capped mountains. The pulsar theory group there led by Professor Shibata looked after us well. Ryan engaged the post graduate students in lively discussion about pulsar observation and models before giving a seminar to staff and students. We also met with their outreach volunteers and inspected their rooftop observatory and 3D space theatre. A group dinner at a traditional soba restaurant was a highlight as was tasting the local sake. The giant globe at the top pf this building is the planetarium of Koriyama Space Park.

The giant globe at the top pf this building is the planetarium of Koriyama Space Park.

A visit to Miraikan is highly recommended when in Tokyo. The exhibits are labelled in both Japanese and English, with many being hands-on. The astronomy displays included a controllable model of the Subaru telescope, a mock-up of part of the Super Kamiokande neutrino observatory and much more. The standout exhibit is Tsunagari, the Geo-cosmos, a giant globe suspended in a vast space. It was mesmerising to watch the display change constantly. Overall the PULSE@Parkes in Japan Tour was a great success. We feel privileged to be able to share the PULSE@Parkes program with colleagues and students in Japan and were made most welcome by all the people we met and places we visited.

CASS is grateful for the generous support of the Australia-Japan Foundation for this tour. We would also like to acknowledge the effort of NAOJ and Dr Kameya in particular in hosting and organising the tour and Koriyama Space Park for hosting the second set of observing sessions. Schools that observed at Koriyama on the 25 and 26 May were: Fukushima High School, Nihon University Tohoku High School, Asaka High School, Asaka Reimei High School and Iwaki High School.

Previous post:
Let me introduce some of the fabulous teams…
Coming up next:
Bird flu in China – should we be afraid?