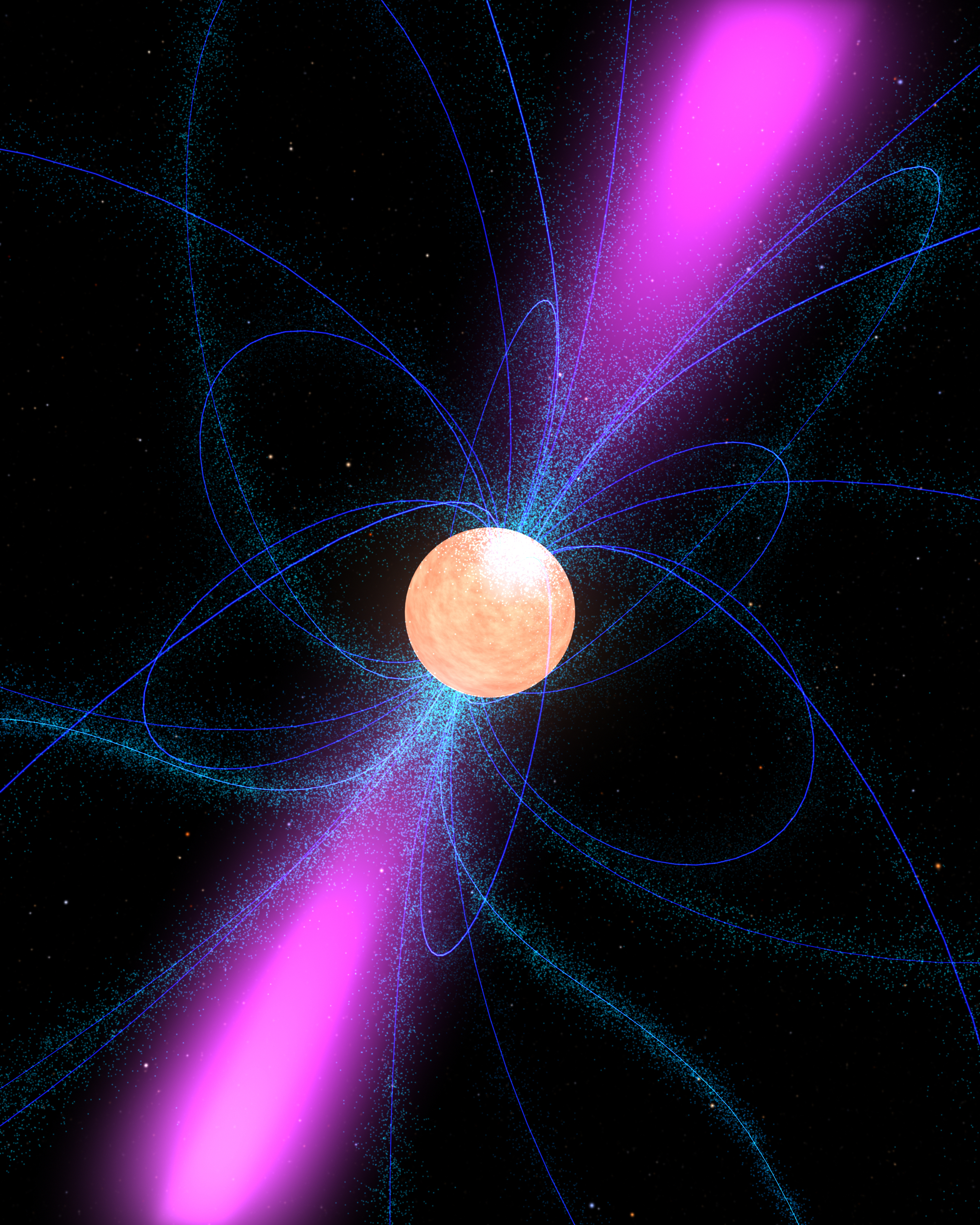 Hi and bye: pulsar J2032+4127 is not going to linger near its companion. Artist’s impression: NASA

A non-standard search method has turned up a highly unusual star — a “fly-in, fly-out” pulsar that orbits its companion star just once every 25 years.

The pulsar, called J2032+4127 (or J2032 for short), is the crushed core of a massive star that exploded as a supernova. It is a magnetised ball of ‘neutron star matter’ about 20 km across, about 1.4 times the mass of the Sun, and spinning seven times a second.

It lies 5,000 light-years away, in the constellation of Cygnus (the Swan).

Many pulsars emit pulses of both radio waves and gamma rays. J2032 is one of them, and was discovered when NASA’s Fermi Space telescope spotted its varying gamma rays. 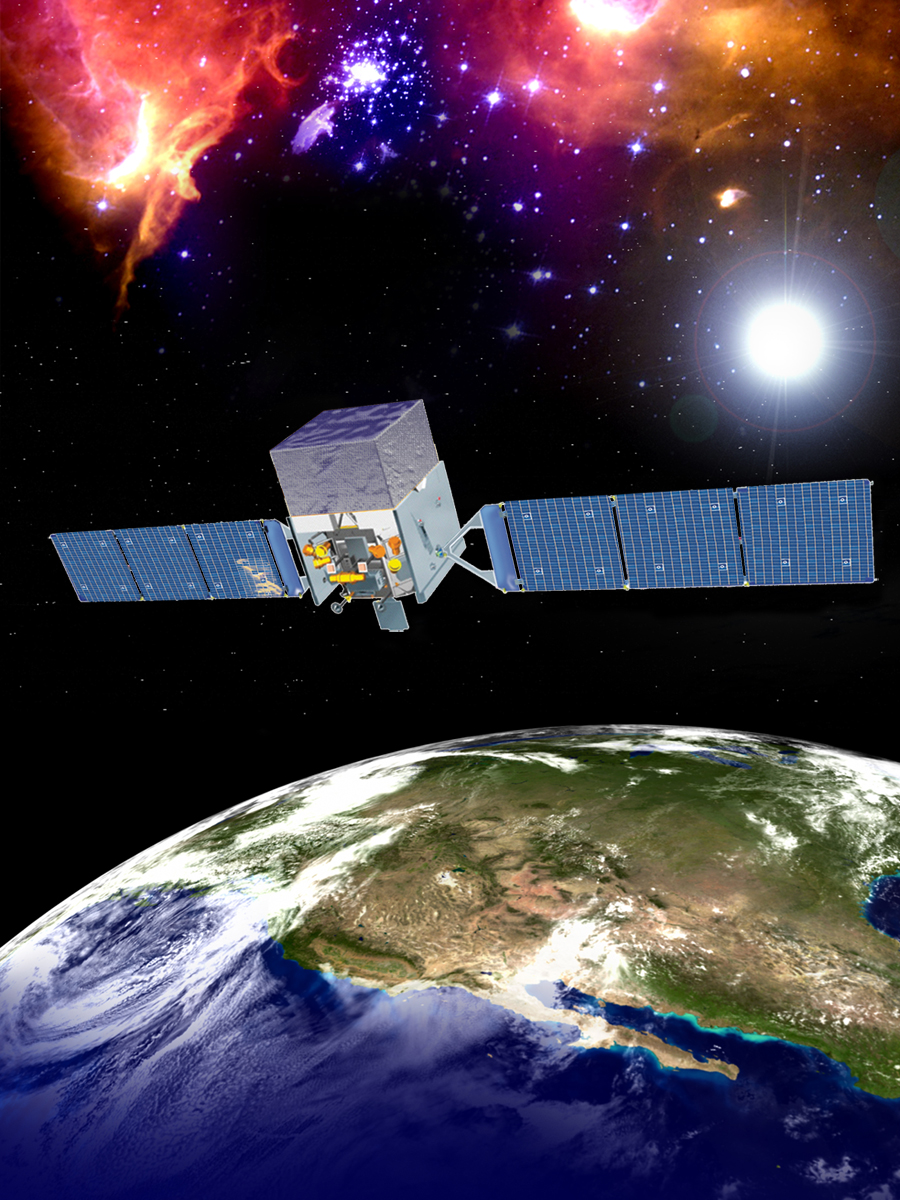 Once they knew exactly where to look, radio astronomers too were able to detect J2032. A team at the UK’s University of Manchester kept tabs on the object from 2010 to 2014. And they noticed something odd.

There were strange variations in both the pulsar’s rotation and the rate at which the rotation was slowing down. The most likely explanation was that the pulsar is orbiting another star — and in a very large orbit.

J2032 turns out to be the longest-period binary pulsar known, and has an extremely eccentric (that is, elongated) orbit. Like a long-period comet orbiting the Sun, it swoops in from a distance, makes a quick turn around its star, and then flies off again. The pulsar and its companion have a mostly long-distance relationship, with the occasional close encounter. 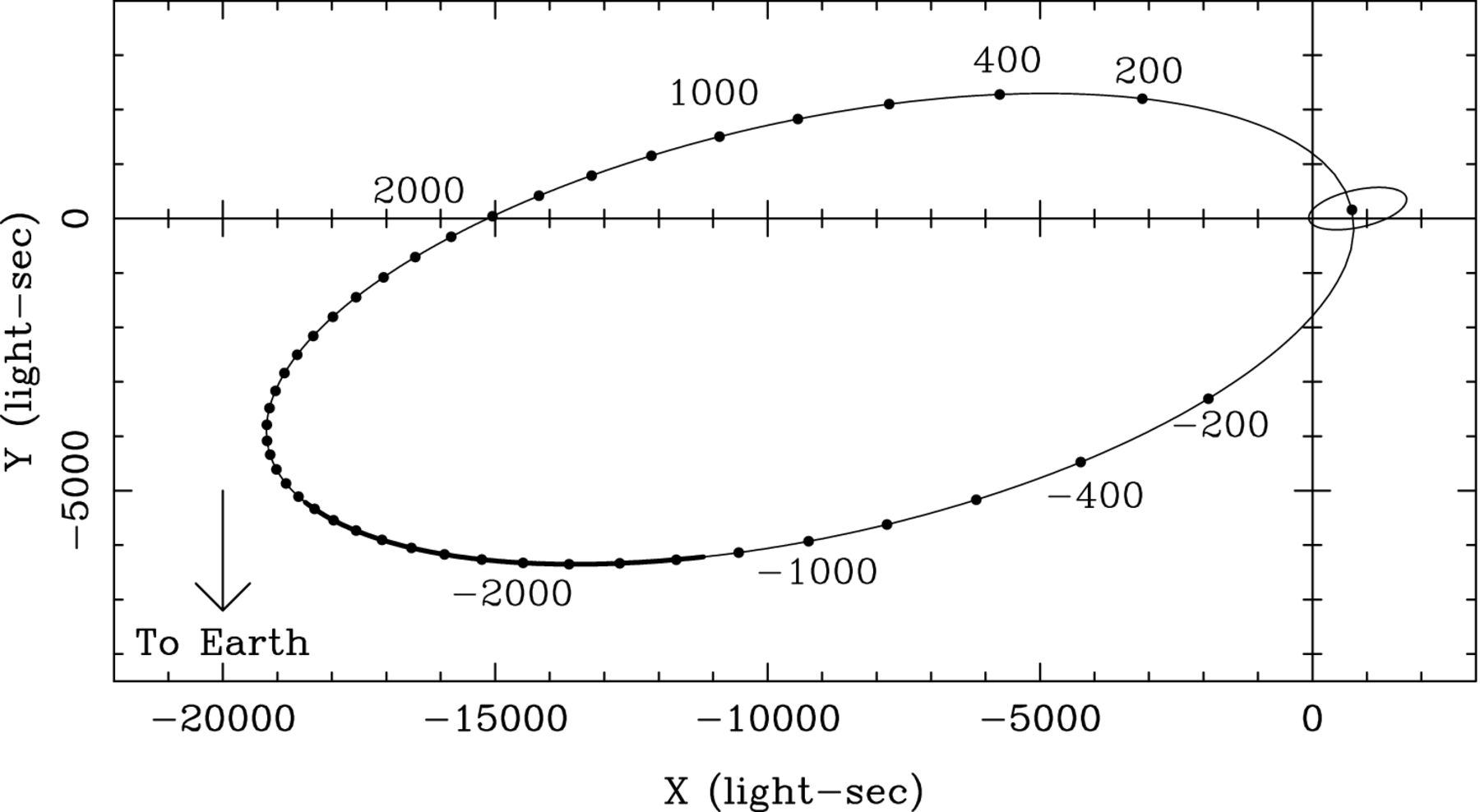 The orbit of the pulsar (big ellipse) and its companion star (small ellipse) around their mutual centre of mass. The numbers around the big ellipse mark the number of days from the pulsar’s point of closest approach to its star (periastron). The darker parts of the ellipse represent the part of the pulsar’s orbit that took place while the pulsar was being timed during 2010-2014.

The companion star is called MT91 213. Classified as a Be star, it has 15 times the sun’s mass and is 10,000 times brighter. Be stars have strong outflows of material, called stellar winds, and are embedded in large disks of gas and dust.

CSIRO astronomer Dr Matthew Kerr, a member of the team that found the pulsar, contributed an improved method of pulsar timing that facilitated the discovery.

As we search for pulsars in new ways, “we’ll turn up more and more unusual ones,” Dr Kerr said. “This could change our ideas about the nature of the whole pulsar population.”

Astronomers think the supernova explosion that created the pulsar also kicked it into its eccentric orbit, nearly tearing the binary apart in the process.

When the pulsar whips close by its companion in early 2018, it will plunge through the disk of material around the Be star and trigger astrophysical fireworks, which astronomers will study with a range of telescopes.

“The pulsar will serve as a probe, letting us measure the massive star’s magnetic field, stellar wind and disk properties—something we couldn’t do any other way”, Dr Kerr said.

A study of the system, led by Professor Andrew Lyne of the University of Manchester, was published on 16 June in the journal Monthly Notices of the Royal Astronomical Society.

This story is based on a NASA media release.

Previous post:
GovHack: All your data are belong to us
Coming up next:
The 3D titanium Terminator: come with us if you want to print