Our favourite photos of your backyard beauties

Our favourite photos of your backyard beauties

We asked for your best nature photos, and you delivered! We've chosen six of our favourite shots, including a slender snake and a bejewelled beetle ...

Big and small. Hairy and feathered. Brazen and well … just a little hermit-crabbish. Over the last few weeks, people have sent us photos of all sorts of native Australian animals via the ABC’s Magical Land of Oz citizen science project.

We asked for your favourite photos of animals, plants and fungi … and you delivered! The Atlas of Living Australia has been swamped with beautiful photos from around Australia. It was no small feat, but we’ve managed to pick five of our favourite photos. And there’s still time to send us your photos—upload them today! Your images will help scientists get a better understanding of our unique biodiversity. Thank you, for all of your contributions. 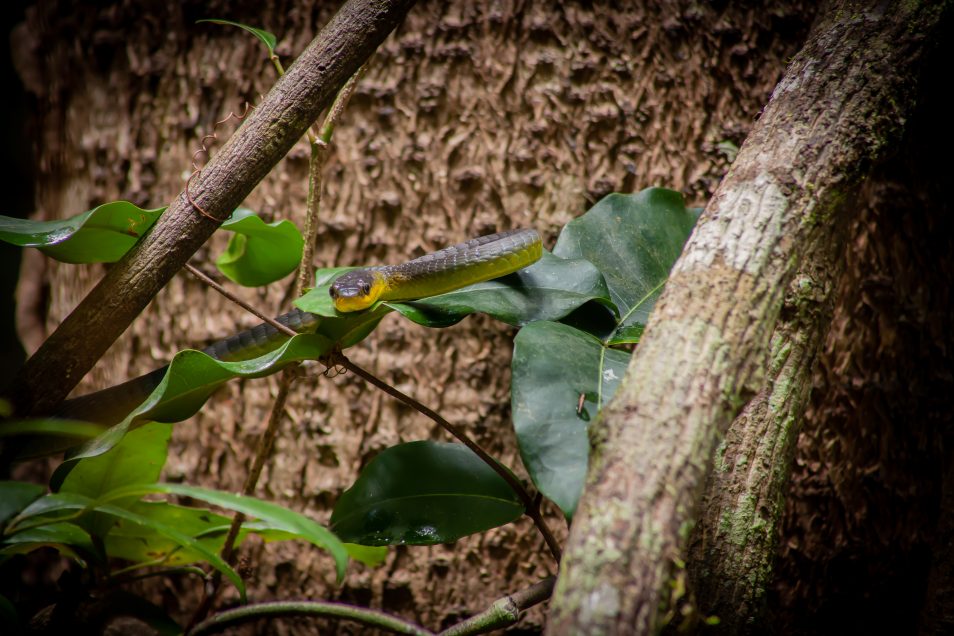 The common tree snake can be green, black, blue or yellow. Image by Donald Macdonald via Atlas of Living Australia.

This beautiful photo of a common tree snake (Dendrelaphis punctulatus) was taken by Donald Macdonald. Typically green, the common tree snake can also be black, blue or yellow. It can also have pale blue flecks between its body scales.

Common tree snakes live in coastal and sub-coastal areas of northern and eastern Australia. They’re found in open forests, rainforests, rural areas and suburban gardens. As it’s name suggests, it’s arboreal (tree-dwelling). It’s also known to enter homes. But don’t worry, it’s non-venomous and feeds on frogs, fish and small reptiles. It’s fast-moving and can grow to 2 m. It lays 3 to 16 eggs, that, when hatched, are around 24cm from tip to tail. 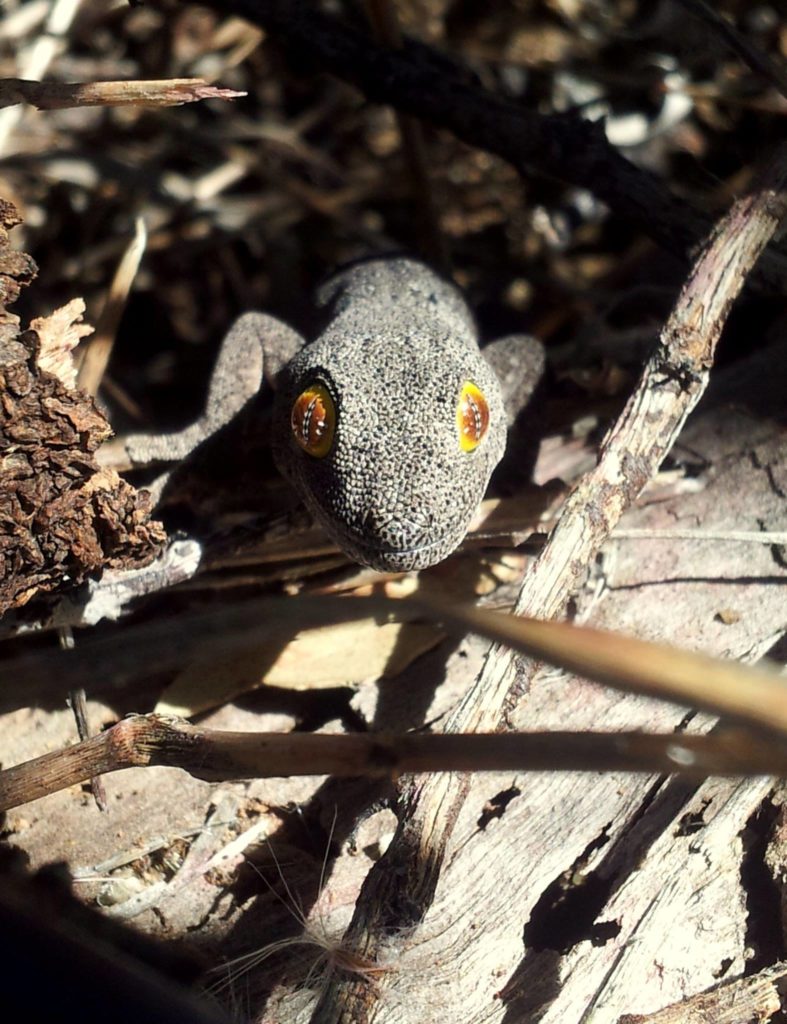 The western spiny-tailed gecko (Strophurus strophurus) spends a lot of its life pretending to be a branch. Image: Aidan English via Atlas of Living Australia.

It might be small (14cm) and slow-moving, but this little lizard is fascinating!

The western spiny-tailed gecko is a ‘branch mimic’—it hides from predators by becoming ‘at one’ with its surrounding (pretending to be a branch). It spends nearly all its time in shrubs, and only ever ventures down to the ground to forage or to lay eggs. The spines above the eyes and on the tails are soft, but if it’s agitated this sassy gecko will exude a dark noxious liquid from its tail. The liquid is sticky and has a strong, unpleasant odour.

But wait, there’s more! This gecko’s inner body wall is lined with a special UV protection. It shields the insides of its body from harmful rays—useful when you spend so much of your day basking in the sun, on a branch, in the Western Australian desert. Life sounds pretty sweet, for the western spiny-tailed gecko. You can read more about this little lizard at the the Atlas of Living Australia. 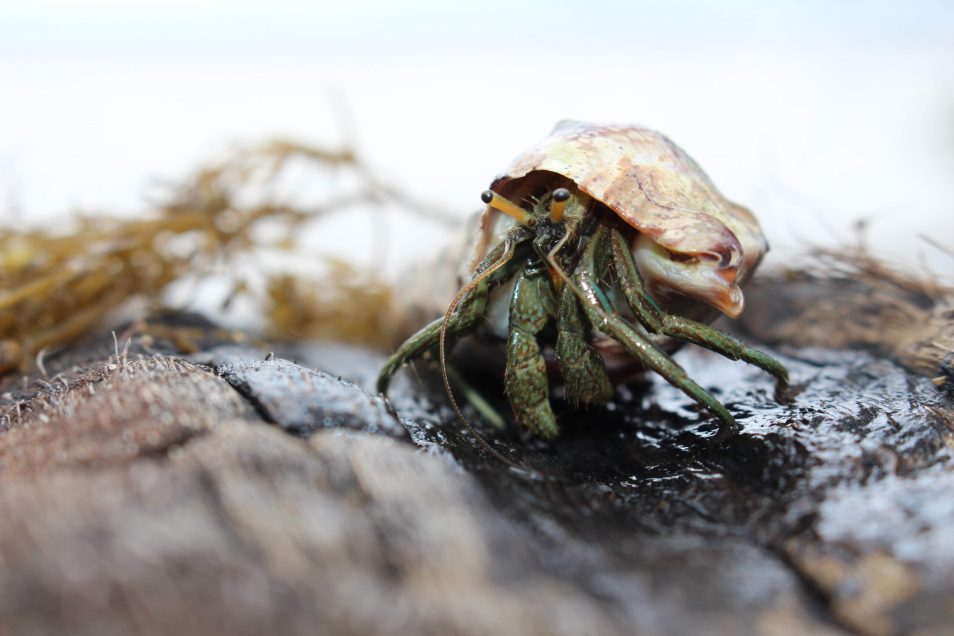 A hermit crab peeks out of its recycled shell. Image: Rachael Curry via Atlas of Living Australia.

Ahh, the introvert’s favourite crustacean. This crabtivating image of a hermit crab was captured by Rachael Curry.

Hermit crabs are unlike other crabs. Most crabs are covered by a hard exoskeleton, but hermit crabs have a soft, delicate abdomen. They’re sensitive. But they’re also vulnerable without the protection of a shell, so they scavenge around (hello, hard rubbish day!) to find a discarded snail shell for protection.

But what happens when it gets too big for its recycled tiny house? The hermit crab must go in search of another, bigger shell. The Australian Museum paints the scene: “They inspect the shells by holding them up and turning them over before leaving the safety of their current home. Sometimes the chosen shell just isn’t right … so they move back to their original shell and start the search again. [It’s like op-shopping for the perfect jumper.] Competition can be tough for the best shells and occasionally fights break out between hermit crabs.”

This particular crab is from the family Diogenidae. Crabs in this family are sometimes known as “left-handed hermit crabs” because, unlike most other hermit crabs, its left chela (claw) is bigger, instead of its right. So basically, this hermit crab is a maverick within a group of mavericks. 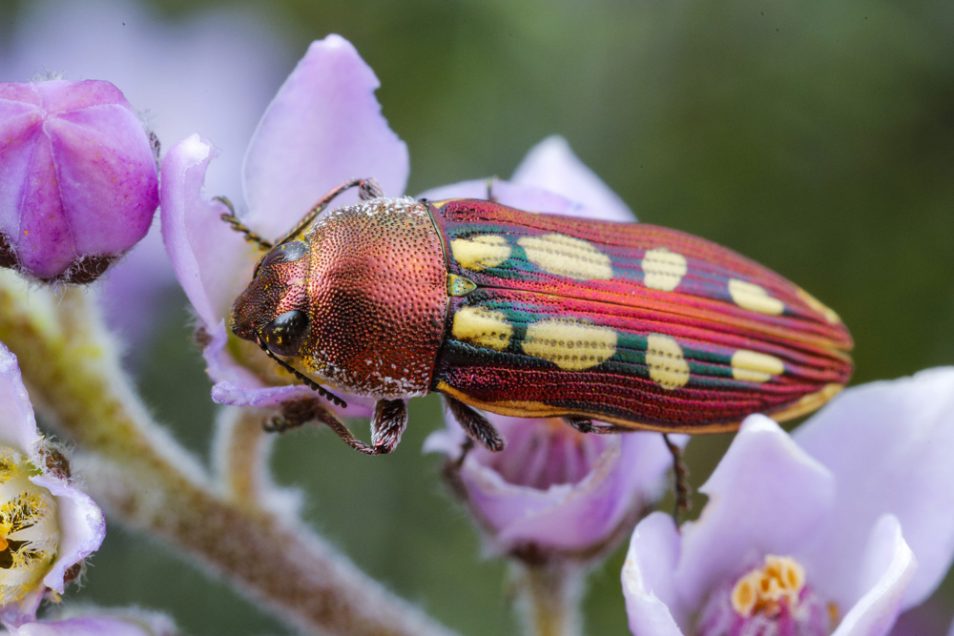 A jewel beetle (Castiarina aura) shins bright in bunch of flowers. Image by Nick Monaghan via Atlas of Living Australia.

Jewel beetles are famed for their beauty. This little gem was captured by Nick Monaghan.

Jewel beetles belong to the family Buprestidae, which is a large group with about 1,200 species in Australia. The hard external skeleton of the jewel beetle is famously colourful. But their exoskeleton is also textured in a way that can produce a metallic sheen and “the multifaceted appearance of cut precious stones”. It’s no wonder that on other continents, jewel beetles have been used in clothing, decorative boxes, sculptures and even religious shrines.

Jewel beetles are found throughout Australia, in forests, lowland rainforests, high alps, woodlands, heath and on the edges of sun-baked inland riverbeds. Their larvae live in wood or, more rarely, softer plant stems, with some species feeding in dry leaves. Most adults eat nectar, but some survive only on foliage. 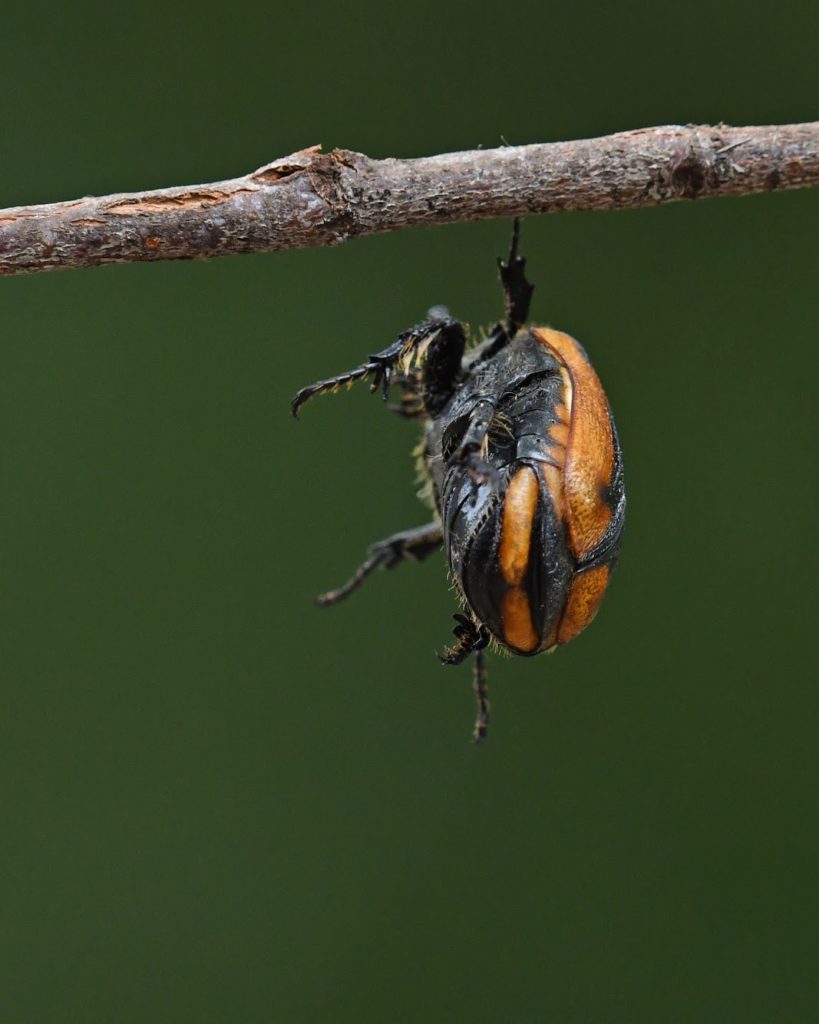 A cowboy beetle hangs from a branch. Image by Lachlan Read

Is this cowboy beetle doing chin ups? Has it walked the plank? Or it is just a little clumsy? We’ll never know. But we do know that when it was a larvae it lived in, and ate, decomposing wood. And now, as an adult, it will fly from flower to flower in search of sweet, sweet nectar.

When its in flight, searching for flowers, and when it feels threatened, the cowboy beetle makes a loud buzzing noise. This noise mimics a wasp, helping to keep predators away.

Have you ever seen a cowboy beetle? If you live in south eastern Australia (in Victoria, New South Wales and Queensland) you can spot this colourful beetle. It lives in gardens, in woodlands and dry eucalyptus forests. In summer, the adults emerge, leaving behind their former lives as a wood-eating larvae and a mud-and-rotting-debris-encased pupae.

How can you help our Aussie animals? 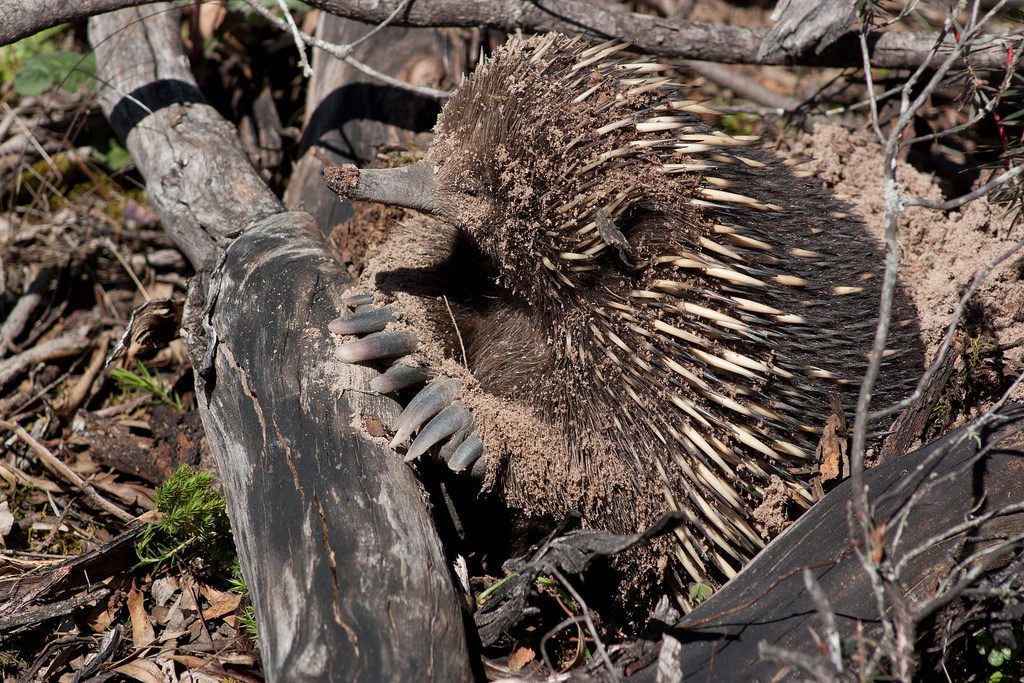 Echidnas are one of the species found on the Magical Land of Oz, the ABC’s new nature doco.

There are plenty of ways you can help reverse the impact of human encroachment on Australian wildlife. You can plant more native vegetation, keep your cat indoors, and keep your dog on a lead when you’re walking in bushland or on the beach. You can also help by sharing your nature photos.

We’re searching for photos of all creatures, big and small, to help us get a better picture of Australia’s unique biodiversity. We’ve partnered with the ABC to launch a photo round-up through the Atlas of Living Australia. Upload your photos today!

Previous post:
Using technology to better understand our Antarctic marine life
Coming up next:
SAGE advice from a scientist helping to fix science