It’s not the science of tax, and five other things you should know about taxonomy

It’s not the science of tax, and five other things you should know about taxonomy

Earlier this year, a Canadian scientist named a new moth species Neopalpa donaldtrumpi (read that name out loud for full effect). It’s an insect with a golden hairdo and relatively small genitals.

Taxonomy is the science that provides species with names.

But it’s more than that. Taxonomy is a foundation for an enormous range of human activities, both scientific and social.

The whole of biology, as well as agriculture, conservation, biosecurity and countless other fields, depend on taxonomy.

Here are five things you should know about taxonomy.

You’ve probably heard of the Large Hadron Collider. How about the Square Kilometre Array, or the European X-Ray Laser? Science requiring such expensive kit is sexy, and popular.

But taxonomy is also big science. It’s just that the infrastructure and resources – the collections of preserved scientific specimens that taxonomists study in museums and herbaria – are spread out across Australia and the world.

We estimate that Australia’s taxonomic collections house over 70 million specimens of plants, fungi, animals and micro-organisms, valued at over AU$5 billion, and that’s not counting the many priceless Australian specimens held in overseas collections.

2. Never name a species after yourself

We mentioned the blonde Trump-like moth earlier. Other creatures named after famous people include a water spider recently given the species name mickfanningi after its eponymous surfing legend.

To be fair, most species named after famous people do still indicate a distinctive feature. There is an Australian fly with a golden rear end named Scaptia beyonceae.

But while it’s not impossible, it’s definitely frowned upon to name a species after yourself.

It is however definitely OK to name species after people you respect. The recently deceased Australian palaeontologist Ken Campbell had a dozen new species and two new genera of fossils named after him by scientists from Australia, the United States, China and Canada. And at least nine animals and plants, living and fossil, have been named after legendary television documentary-maker David Attenborough.

Taxonomy began in earnest when Swedish scientist Carl Linnaeus invented the naming system we still use today. Systema Naturae (The System of Nature) was published in 1758.

This was so successful that, well before standardised units of measurement, or even standard calendars, taxonomy became a truly global science. Chinese, Arabic, Russian and Australian taxonomists all name species in the same way, using a common, global language. Taxonomy is a striking example of a successful, global, cooperative scientific endeavour.

And this collaborative tradition continues. Taxonomists from all over Australia are working in partnership with the Atlas of Living Australia to catalogue, in a single national system, all records of all Australian species. The tally currently stands at over 70 million records of nearly 500,000 species. Globally, an even bigger initiative is ten times that size.

Globalisation has been a feature of taxonomy from its earliest days to the present. 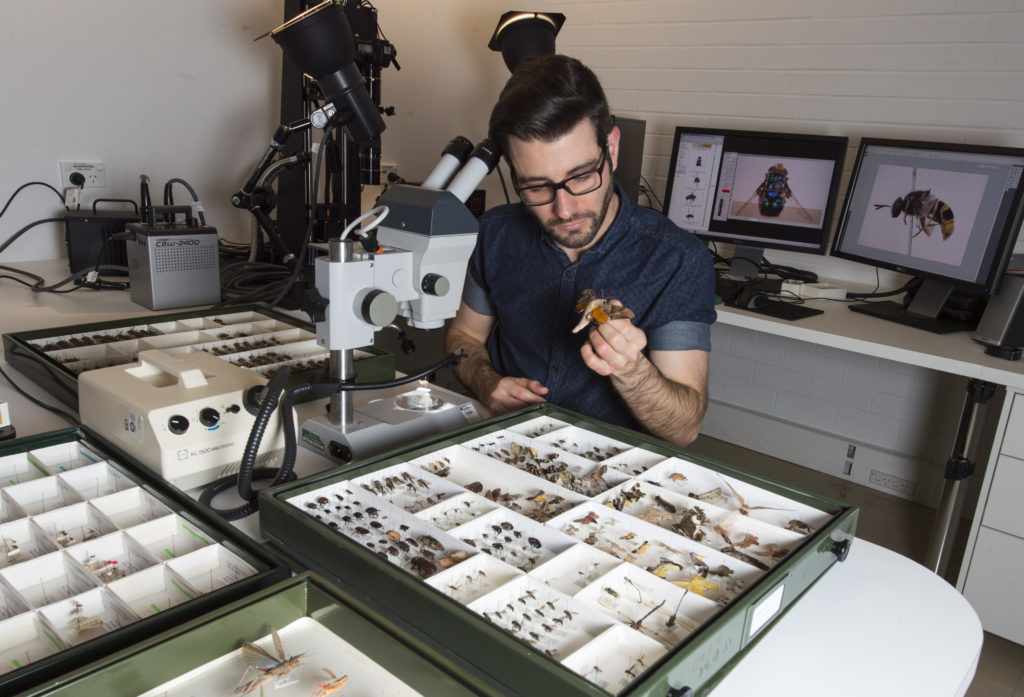 What insect is that? CSIRO, Author provided

What insect is that? CSIRO, Author provided

We’ve only discovered and named a minority of species on Earth. This means that, in the face of ever-increasing rates of species extinction, taxonomy is more important now than ever. If we don’t know that something exists, there’s little chance of saving it.

And we’re in the thick of this in Australia, having one of the highest rates of both species discovery and species extinction anywhere in the world.

An estimated 75% of Australian species have not yet been discovered or named, most of which are insects.

5. Life is still evolving, and so is taxonomy

Much like the living world that taxonomists seek to understand and name, the science of taxonomy is constantly evolving. The first taxonomists named and classified species subjectively, using only readily visible features.

Modern taxonomists, by contrast, can examine specimens in the minutest detail, peering into every nook and cranny. Many insect taxonomists famously rely on the male genitalia of their specimens, a rich source of taxonomic information – hence the issue of penis size in Neopalpa donaldtrumpi is actually important.

And new genetic technologies that allow rapid sequencing of DNA has revolutionised the field, and with it our understanding of life, evolution and biodiversity.

It’s an incredibly exciting (and important) time to be a taxonomist. So next time you look at a species and know its name, or wonder what it might be, spare a thought for the taxonomists who are painstakingly naming all of life.

Previous post:
‘Hairy stars’ may be roaming our galaxy
Coming up next:
Know your mozzie: the Asian Tiger Mosquito