Cracked it! A 30-year cold case involving an egg and the mysterious Night Parrot

Cracked it! A 30-year cold case involving an egg and the mysterious Night Parrot

An egg discovered over 30 years in the Tanami Desert was thought to be from the elusive Night Parrot. But a recent genetic analysis reveals a different story. 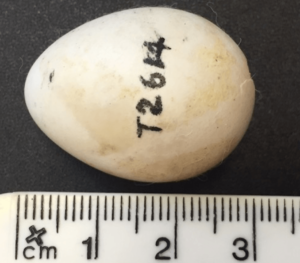 Sometimes nature leaves little clues that can be difficult to interpret, so getting things right isn’t always easy.

Consider the case of an egg that was found in northern Australia’s remote Tanami Desert. It was spotted abandoned on the ground among spinifex in the early 1980s.

After being studied by ornithologists, the view was that it may well be an egg of the spinifex-nesting Night Parrot, described by the Smithsonian as one of the world’s most mysterious birds. The chances of finding such a rarity are astronomical.

The bird’s scientific name is Pezoporus occidentalis and it is known in that part of the Northern Territory as Yurrupudpudpa by the local indigenous group, the Eastern Warlpiri.

But was this really the egg of a Night Parrot? There are no confirmed Night Parrot eggs among the extensive collections of the world, so nobody was really sure.

Nevertheless, the possibility drifted loosely into the literature that it was the only known egg of the Night Parrot.

The Night Parrot – as the name suggests – is a truly nocturnal parrot, and the only other one is the Kakapo of New Zealand.

This bird of the Australian outback is also extraordinarily elusive, known from fewer than 30 specimens scattered through the world’s museums, despite its range stretching all the way from the Pilbara to northwestern Victoria.

In 2013, the parrot was “rediscovered” after its almost complete disappearance in the early 20th century and despite considerable efforts to prove it was still around.

Naturalist John Young found a tiny population alive and seemingly well, if not in great numbers, in remote western Queensland.

Since then, research has yielded plenty of information about what the birds need for their conservation and management.

So what then of the fate of the Tanami egg find?

For 30 years the egg sat unstudied, first in the South Australian Museum and then in the Museum and Art Gallery of the Northern Territory, under accession code T2614.

Finally, a team led by one of us (Penny) decided to investigate further, with the results published today in Australian Field Ornithology.

An actual egg of the Night Parrot would be a great prize – not least because knowing of a place where Night Parrots could be shown to have bred would be a useful piece in a jigsaw of the bird’s biology that was still wildly incomplete.

Penny contacted Jeremy Austin at the Australian Centre for Ancient DNA at the University of Adelaide. The plan was to extract DNA from dried membranes inside the egg to obtain a DNA sequence that could verify the egg’s origin.

If a DNA sequence could be obtained, then it could be compared with sequences from two Night Parrot specimens that had both been found dead, incredibly enough, in western Queensland in 1990 and 2006. These are lodged in the collection of the Queensland Museum.

It was a simple but good plan, perhaps a little technically exacting to execute, but Jeremy’s expertise carried the day. A DNA sequence was obtained from the mystery egg.

On entering it into databases of DNA sequences of the world’s birds and with a figurative as well as literal holding of breath, the researchers waited for the result.

The DNA sequence turned out to be an excellent match for … a Brown Quail (Synoicus ypsilophorus).

It was nowhere near a match for the Night Parrot, or indeed any other parrot.

This may have settled the matter, but not quite. Apart from being a rather interesting record of the Brown Quail, one more angle needed pursuing. That was a visit to egg collections held in the research collections of museums, specifically that of the CSIRO’s Australian National Wildlife Collection (ANWC), in Canberra.

The ANWC egg collection has a number of clutches of eggs of Brown Quail as well as several of one of the Night Parrot’s closest relatives, the Eastern Ground Parrot (Pezoporus wallicus).

The Eastern Ground Parrot, though a different and better-known species, is an ecological and evolutionary equivalent of the Night Parrot but found in coastal heaths. The point is that they are indeed a very closely related species, so their eggs can reasonably be expected to be similar.

All the world’s parrots lay eggs that are white – bleached sand white – and somewhat rounded, not pointed, at one end like a chicken’s egg tends to be.

The egg found in the Tanami Desert was indeed pale, though not bleached sand white, and it was pointed at one end. A scan through the ANWC collection showed that some clutches of Brown Quail eggs are rather pale and whitish but that they never attain that bleached whiteness of a parrot egg. Typically, they are variably speckled brown.

And the shapes of Brown Quail and parrot eggs differ markedly. One end of the quail’s egg is always pointed, just like the Tanami egg.

The value of collections

Though we may with hindsight ponder why the Tanami egg was ever thought to be of a parrot, let alone a Night Parrot, the story is a salutary lesson in the value of research collections held in museums.

They provide the material from which DNA can be extracted and sequenced to build up molecular-level descriptions of the world’s biodiversity. They provide us with robust understanding of what the species of the world and their eggs (or larvae or fruits or seed heads) look like.

Museums are a major repository of the raw data with which we study how life on earth has evolved. Along the way, they can also provide us with answers to tantalising mysteries about rare and little known species.

As for the mysterious Night Parrot, the search goes on for new populations and more details of this elusive bird.

Dr Steve Murphy, who is studying the Night Parrot population in western Queensland, co-authored this article.

Previous post:
Under the Milky Way: what a new map reveals about our galaxy
Coming up next:
State of the Climate 2016: Bureau of Meteorology and CSIRO