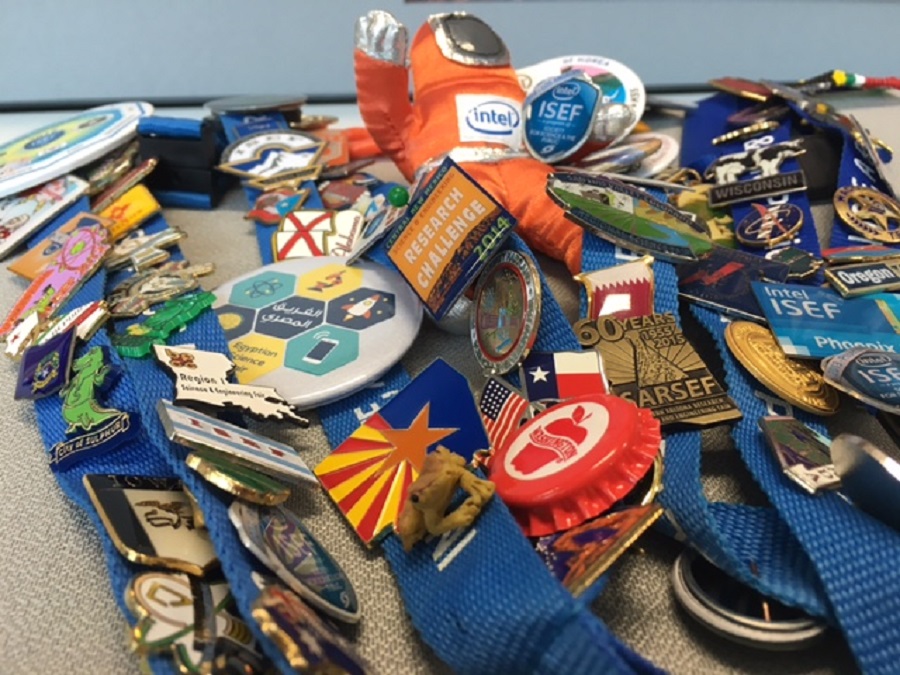 1700 students far from home, science and engineering projects as far as the eye can see and thousands of tiny sharp objects all in one place could easily be the stuff of nightmares.

But it is actually the gathering of the best scientific and engineering minds from all over the world, where scientific knowledge, contact details and novelty pins (or badges) are readily exchanged.

Thanks to the generous support of the BHP Billiton Foundation and Intel Foundation, we are sending six of our BHP Billiton Science and Engineering Awards finalists to compete in Intel ISEF.

Hugh McKay hard at work on his project.

We’re proud of our students achievements to date, so while they are in a flurry of packing clothes, projects and pins for the flight to Phoenix, Arizona on May 5, let’s have a look at where a couple of their scientific journeys began.

Hugh McKay is a teenager from Tasmania who worked alone to turn bits of DVD and VCR players into cheap prosthetics for children amputees doing farm work in developing nations. While his school had a 3D printer, they didn’t have anyone who knew how to operate it. After months of hard work and trial and error, Hugh is not only a leading expert on cheap prosthetics, but also the go to guy for any of his school’s 3D printing needs. Hugh took out the inaugural Innovator to Market prize at the BHP Billiton Science and Engineering Awards 2016.

At the same time Hugh was developing his project, Madeleine Maloof was sitting in her dental assistant chair at her after school job in Sydney thinking about the effect whitening toothpastes have on tooth enamel. Her research had some surprising results and won her third prize in the Investigations category at the BHP Billiton Science and Engineering Awards 2016.

Hugh and Madeleine will join four other student scientists from around the country at Sydney Airport on May 5 to head off on a trip of a lifetime.

We’d like to congratulate all the students heading to Intel ISEF 2016. We’re sure you’ll come back with contacts, stories, pins and memories to last a lifetime.

The Science Teachers Association of New South Wales are also sending a team to Intel ISEF with three prize winners from the BHP Billiton Science and Engineering Awards.

You can find out more about our Intel ISEF participants here.

Previous post:
Jumping into jobs with Ribit
Coming up next:
A Side of Planet — the Healthy Diet Score weighs up our diet’s carbon footprint