ASKAP will help scientists to tackle some of the biggest questions in radio astronomy. Image: Alex Cherney

The A$140m facility, built in the remote Murchison Shire of Western Australia, has a dual role as a cutting-edge radio telescope to study the universe and as a technology demonstrator for the planned A$2 billion Square Kilometre Array (SKA).

ASKAP comprises 36 radio dishes, each with a diameter of 12 metres, making the telescope sensitive to faint radiation from the Milky Way and giving it the ability to detect very distant galaxies. It is also a remarkably complex telescope.

A new receiver technology called a phased array feed, developed in Australia by CSIRO, gives ASKAP an unrivalled capability to survey large volumes of the cosmos.

These special cameras increase the area of sky visible to the telescope at any one time by a factor of 30 over existing technology. This increases the scale of the resulting photographs of the radio sky from the size of the full moon to an area larger than the Southern Cross.

The addition of this wide-angle camera boosts the survey speed of ASKAP, allowing astronomers to carry out large “drift-net” surveys, to trawl the sky and gather information on hundreds of millions of galaxies.

By working in this way, the telescope is able to tackle big-ticket research areas such as cosmology and dark energy and gather enough statistical information to study the fascinating life stories of galaxies. 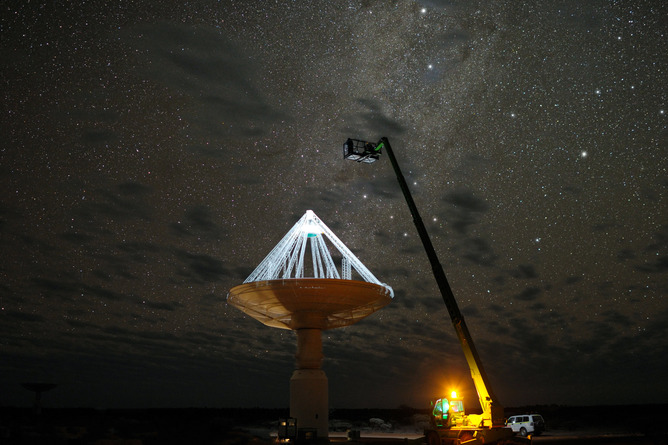 It’s been several long years of design and construction, but ASKAP is open for business. Image: Alex Cherney

Researchers from around the world are already lining up to use the facility with ten ASKAP science survey teams, totalling more than 700 astronomers, ready and waiting.

These teams are working with CSIRO to design and maximise the scientific value of the surveys, some of which will take around two years to complete. Science verification has begun and some science projects are expected to be underway by the end of 2013.

Dealing with such data volumes is something radio astronomers will have to get used to. In the era of the SKA we will find ourselves interacting less with real telescopes and more often mining online data stores and “virtual observatories”. Not only is the technology changing, the way in which we do our science is also being transformed.

One of the aims of the SKA Pathfinders (the others being the MeerKAT facility in South Africa and the Murchison Widefield Array) is to ensure the next generation of astronomers is ready for this new challenge.

The official opening of ASKAP and the Murchison Radio-astronomy Observatory (MRO) marks the beginning of a new chapter for radio astronomy in Australia. Following the announcement earlier this year of a dual-site arrangement for the SKA, we now know the MRO will host two complementary astronomical instruments during Phase 1 of the project.

One will study low-frequency radio waves emanating from cold gas in the early universe and will build on the scientific and technical expertise gained from the Murchison Widefield Array project. The other will be an array of almost 100 dishes built on the capabilities of ASKAP. This instrument will be used to survey unprecedented volumes of our universe and delve even deeper into it’s secrets.

Over the coming decade the number and capabilities of telescopes available to radio astronomers will grow enormously. Along with the Murchison Widefield Array, ASKAP is leading the way in prototyping cutting-edge SKA technologies at the most radio-quiet observatory on Earth.

It truly is an exciting time to be a radio astronomer!

CSIRO acknowledges the Wajarri Yamatji people as the traditional owners of the land on which the observatory was built.

Lisa Harvey-Smith works for CSIRO and is project scientist for ASKAP.

Previous post:
So many blocks, and which goes where?
Coming up next:
The hull moves towards completion with the addition of block 109