Most excellent award for ASKAP receivers

Most excellent award for ASKAP receivers

With our newest radio telescope, ASKAP (the Australian SKA Pathfinder), being commissioned in the Mid-West region of Western Australia, it’s already picking up prizes for engineering excellence. 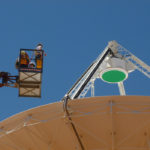 Members of the ASKAP team work on the phased array feed (the circular green receiver at the top of the antenna) at the MRO. 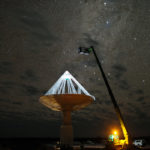 Members of the ASKAP team work on the phased array feed (the circular green receiver at the top of the antenna) at the MRO. Credit: Alex Cherney/terrastro.com 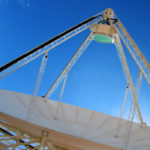 An ASKAP antenna – just one of 36 at the MRO, installed with a phased array feed (the circular green receiver).

Last Friday night, the Sydney branch of Engineers Australia held the annual Engineering Excellence Awards, and ASKAP’s innovative new receiver technology – the phased array feed (PAF) – picked up the ‘Innovations and Inventions‘ award, as well as a Honourable Mention in the R&D category.

Our ASKAP PAF receiver is the first chequerboard receiver specifically built for radio astronomy. Why are these radio cameras so special? They allow ASKAP to simultaneously sample large areas of sky, providing a large collecting field of view and the ability to survey the sky much faster than traditional radio telescopes.

Take a look at the following video to find out more:

The PAF technology is a result of close collaboration between researchers of CSIRO Astronomy and Space Science (CASS) and CSIRO Computational Informatics (CCI, previously Information and Communications Technologies).

Researchers from CCI also took home awards for the Wireless Ad hoc System for Positioning (WASP) technology which uses low cost, portable hardware to provide highly accurate tracking of people and objects in situations (like inside a sports stadium) where clear reception of radio signals is difficult.