Moon landing memories from our crew on the ground

Moon landing memories from our crew on the ground

Where were you when humans first stepped on the Moon? If you weren't alive, how has that 'giant leap' shaped your life? We asked our staff for their best Moon memories ... 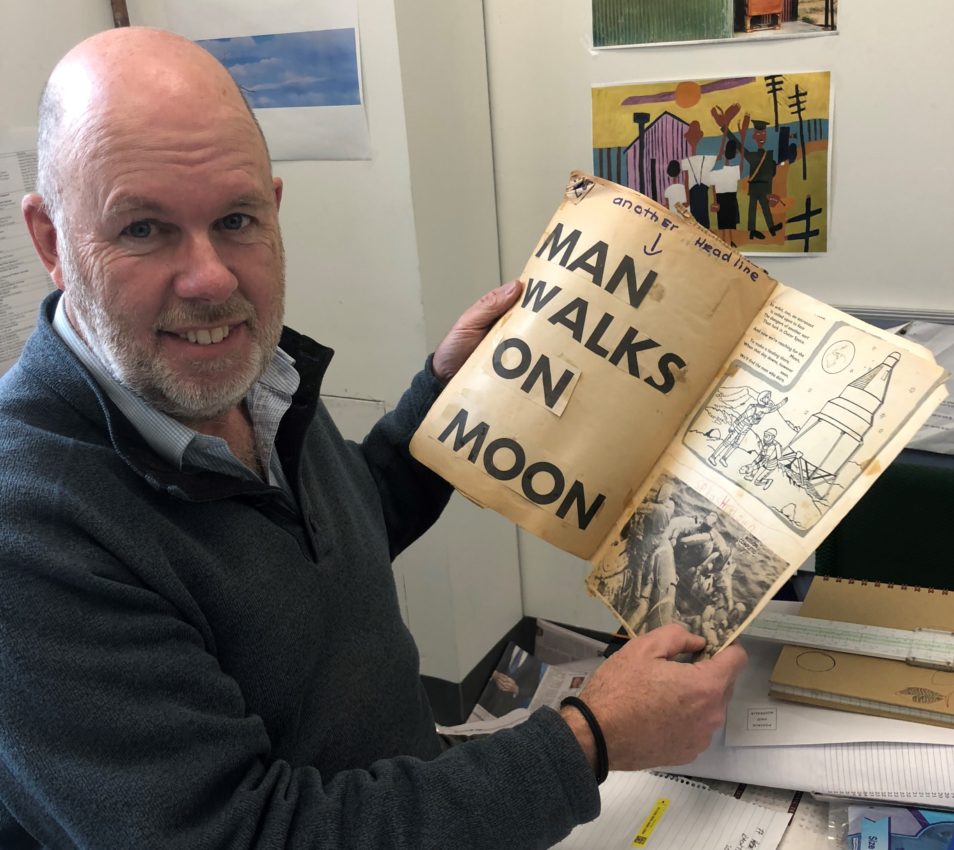 Huw Morgan and his childhood scrapbook of the Moon landing

Not just another headline! It seems Huw Morgan, our Media Manager, has been reporting on the big stories since childhood.

On 21 July 1969, more than 600 million people around the world watched as Neil Armstrong took those famous first steps on the Moon.

Communicating with the Apollo 11 spacecraft and sharing news of this ‘giant leap’ was made possible by the technology and Australian teams at NASA’s Honeysuckle Creek, Tidbinbilla and Carnarvon tracking stations, as well as own Parkes radio telescope.

Do you remember watching the first Moon landing? Or the impact that this marvel had on you? Maybe you weren’t quite ‘of age’ back on that iconic day. Or perhaps you were just a twinkle in your parents’ eyes?

Regardless, we can probably all agree that it was one of the most significant moments in human history. Especially to science and technology. It marked the start of the digital age and led to the creation of numerous new technologies. This includes new types of kidney dialysis machines, water filtration systems and fire-retardant clothing used by firefighters.

While the benefits of the Apollo program are many, its main legacy may have been to inspire a generation of young people to enter careers in science, engineering, technology and maths.

So, we asked some of our staff to share their memories of the Moon landing and how it inspired them. Starting with our Chief Executive, Dr Larry Marshall.

Larry Marshall reaches for the stars

Our Chief Scientist Cathy Foley was with a group of girls watching the footage in her school’s church hall.

“I don’t remember much else about primary school, but that day I do remember. To be honest, it seemed surreal,” Cathy recalled.

“What it’s done for me is to help me realise that if you dream, and dream big, and then follow that dream, you can actually obtain it.

“And I must admit I’ve been really inspired by those people who really put their lives on the line. But also trusted physics. And being a physicist, I guess, it really made me realise that if you do your science correctly and people’s lives rely on it, you can conquer anything.

“And that’s had an enormous impact on my career. The fact that science integrity is really the basis of everything, and the laws of physics actually work!” she said.

Allison Hortle is part of the Moon baby boom

Allison is a senior researcher in our Energy team. She leads a group of around 25 scientists and engineers working across the value chain of hydrocarbon exploration and carbon storage.

“As an Australian born on the day of the Moon landing it has been a never-ending source of chagrin to me that the date is often celebrated on the 20th of July [as it was in the US on the day of the landing; in Australia – due to time differences – it took place on 21 July],” Allison said.

“The family story goes that my mother watched the Moon landing on TV in the hospital after I arrived,” she said.

Huw Morgan was the bearer of good news

Our Media Manager, Huw, was a journo for many years. Now he helps tell the good news about CSIRO’s latest scientific achievements. So naturally, when the biggest news in the world broke he was there, gathering the breaking stories.

As a kid, Huw created this scrap book of news clippings from the lead up to, and after, the Moon landing.

Do you have something similar, carefully tucked away in a drawer? 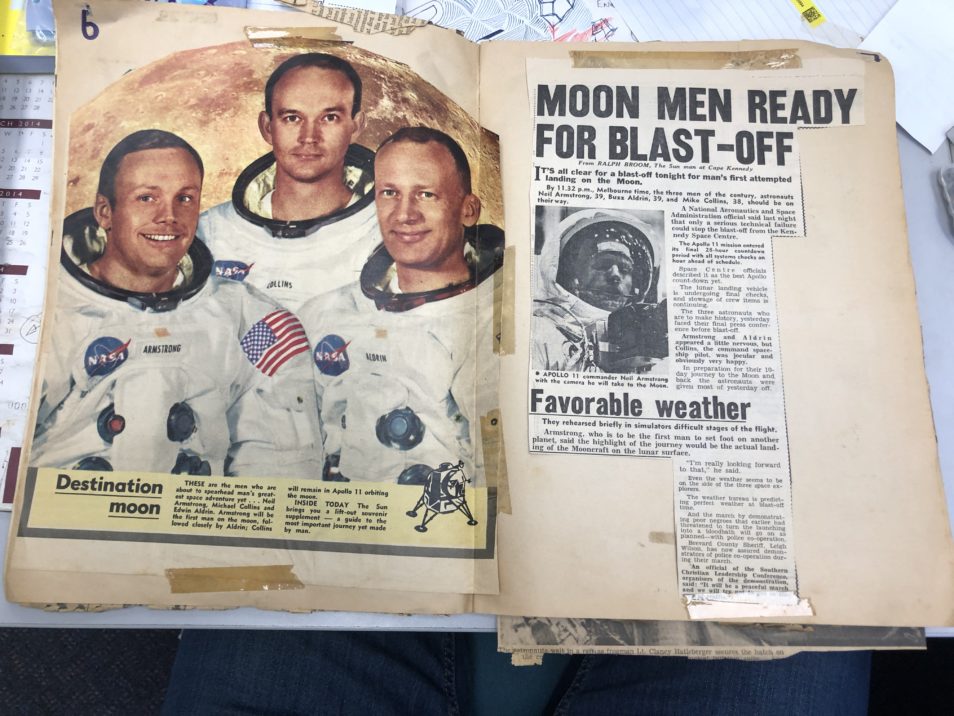 Huw Morgan’s childhood scrapbook has withstood the test of time.

“I was fourteen years old and gathered into the hall at the high school that would become the setting for ‘Summer Heights High’,” David recalled.

He remembers sitting on the wooden floor, trying to see the tiny images on the TVs in the hall.

“It had an impact, as I still remember struggling to hear the sound and see the images that were being beamed from space live for the first time,” said David, who is now an internationally recognised expert on climate change and climate variability.

We loved this recollection from Trish Jordan from our Finance team.

“I was six years old and stayed home from school that day because I had a sore throat. And I can confirm it was a bleak, grey, rainy winter’s day in Melbourne. I remember watching the Moon landing on our HMV television – set in a beautiful wooden cabinet – and wondered what it would be like to be an astronaut,” she said.

Inspired, Trish proceeded to create her very own astronaut’s helmet out of a shoe box.

“Mum got out the box brownie camera and took a photograph of me on the front veranda, taking giant steps, ‘walking’ on the Moon.”

Here’s that precious pic of Trish in her homemade astronaut helmet. 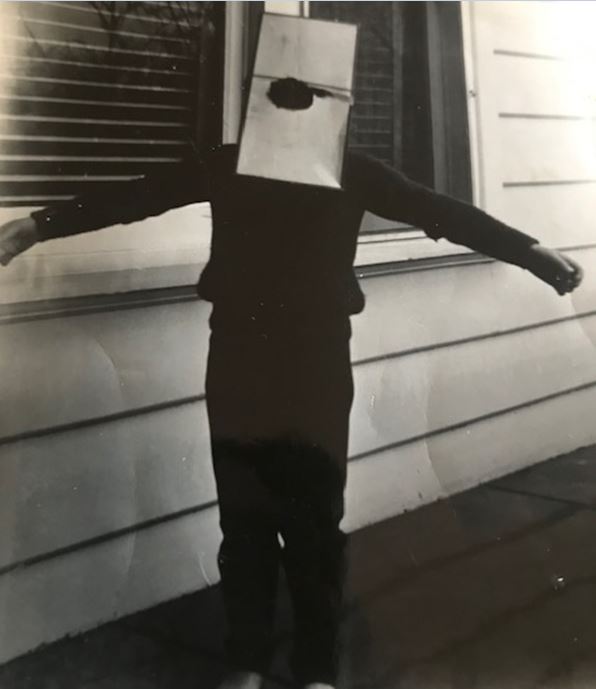 Trish Jordan’s astronaut costume on the day of the Moon landing could double up nicely for a Ned Kelly party.

Colin manages our microscopy lab in Geelong. The Moon landing certainly had an impact on his life.

“Our country primary school only had one television. So, all bar one class were taken to houses near the school where we sat in lounge rooms transfixed by what was happening.

“I think it was probably the quietest my class had ever been!

“It definitely helped me decide that a career in science was what I wanted to do,” Colin recalled.

Now Colin works on developing the next generation of carbon fibre that may very well be used in spacecraft of the future!

Feeling nostalgic? We’d love to hear your Moon landing memories. Please share them in the comments below.

Explore Australia's role in the Moon landing and celebrate at an event near you!

Previous post:
Not one but two Aussie dishes were used to get the TV signals back from the Apollo 11 moonwalk
Coming up next:
Mars and our path to being an interplanetary species