Mars and our path to being an interplanetary species

Mars and our path to being an interplanetary species

As we look back to celebrate the 50th anniversary of that lunar landing, there comes another call. Mars. What's needed to get us there?

In 1961 John F Kennedy challenged America to put humans on the moon. That same year saw the Bay of Pigs invasion, leading into the Cuban missile crisis and an escalation in the Cold War with Russia. East Germany started to build the Berlin Wall and the American civil rights movements grew. Against this backdrop of localised conflict, existential nuclear threats and a broader focus on civil liberties, the space program was a ray of light. It would usher in the space age and define a generation. 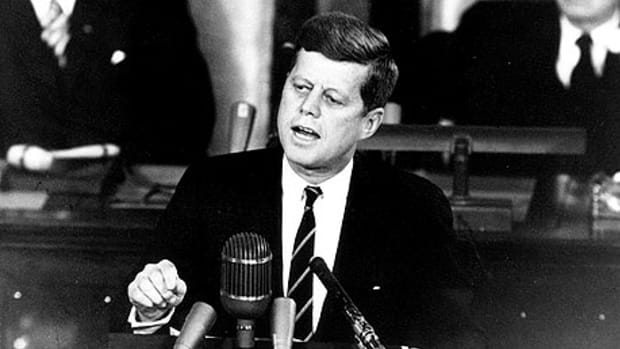 John F Kennedy’s audacious goal of putting a person on the moon inspired a new vision of the future. Source: Supplied

It took courage as a leader to declare the audacious goal of putting a person on the moon inside a decade. That leadership inspired a country to imagine a different future. The iconic imagery of astronauts’ lives on the line for a greater purpose epitomised the American dream; with hard work and ingenuity anyone could reach for the stars. It led to expansionary thinking, more than 1800 industry technology spin-offs, a huge lift in computing capacity and indirectly influenced everything from automotive design to fashion.

About 400,000 people supported the Apollo program and 600 million people – or one-fifth of the planet – paused to watch the live TV feed of the landing, received and relayed around the world from Australia via NASA’s Honeysuckle Creek station near Canberra and CSIRO’s Parkes radio telescope.

Accolades came from all over the world as those famous words, “one small step for man, one giant leap for mankind”, were beamed across space, a message that was as much about humanity as it was the technical triumphs.

As we look back to celebrate the 50th  anniversary of that lunar landing amidst growing rhetoric around a new, artificial intelligence-enabled technological cold war, polarisation and a reconstitution of global power, there comes another call. Mars. The rover Opportunity on the surface of Mars. The Red Planet is more than a destination; it’s a laboratory. Source: NASA

The world is captivated by space travel again, this time with the promise of colonising the Red Planet and developing a permanent moon base as a stepping stone to get there. Succeeding will require new science and technologies at a time when digital, biological and materials sciences begin to converge. It will also require global collaboration, along with new multilateral treaties and legal constructs.

Mars is more than a destination, it’s a laboratory. Conditions are literally out of this world. Scientists and engineers will need to develop technology that can withstand extreme temperatures, cosmic radiation and strong winds, and that can function in light of the 20-minute communication delay between Mars and Earth. Artificial intelligence and machine learning systems will be crucial to machines that will need to operate on the surface where planet-encircling dust events can last weeks, cutting off communications and solar energy sources. New robotic form factors will be needed to operate in harsh and highly variable terrain, like the hexapods or six-legged robots that CSIRO’s Data61 is working with. Current transport models require refuelling on Mars for the return journey, achieved by mining water and producing hydrogen fuel via electrolysis with a closed cycle system, given the low atmospheric pressure (0.6 per cent of that of Earth).

The human condition in space is even more important, solving for health, safety, shelter, food, water, energy and social connectedness. It is estimated that a 500-day stay on Mars would require a 100-kilowatt energy supply. A permanent base would require more. NASA is reportedly developing space-rated nuclear power in the order of 10 kilowatts, but there is more to do. We’ll need stable foods that retain nutritional value over extended periods, including through changes in temperature and pressure and new breakthroughs in social sciences.

In the US where teams train to operate for extended periods in isolation, they reportedly wind up fighting and are susceptible to boredom and depression.

Technologies designed for Mars have already had a positive impact back on Earth. Approaches used to develop sensing technology initially designed for the Mars Opportunity Rover mission has since been adapted by CSIRO’s Data61 to fit bees with micro-sensor backpacks, to better understand bee colony collapse disorder. Chemical analysis units developed to pick signs of water and life on the surface of Mars have been repurposed in Australia to analyse chemicals in rivers in underwater confines in Tasmania. Growing food in extreme environments could be applied to agriculture, while biofoundries for building organisms to clean up toxic compounds could help deal with Earth waste. Hydrogen could become economically viable, and social sciences breakthroughs could be applied to improving the lives of the elderly who often become isolated with time.

It takes entrepreneurial leaders to commercialise space technologies. Witness SpaceX and its stated purpose of revolutionising space technologies, with the goal of enabling people to live on other planets. SpaceX was the first company to land its booster rockets vertically in its quest for rocket reuse to change the economics of space travel. SpaceX has secured more than $US10 billion ($14 billion) in contracts and inspired other entrepreneurial endeavours.

In the US there are approximately 1000 companies operating in the space industry today. and in Australia companies like Gilmour Space Technologies, Neumann Space, Myriota and Fleet Space are all blazing their own trail. Because of Australia’s location in the southern hemisphere, trusted relationships and capabilities, the country could be an integral part of any future program, fuelling a strong space industrial base domestically.

Creating a moon base and colonising Mars will take decades. It will bring a new global purpose – becoming an interplanetary species – and with it, tangible benefits in creating new industries as a new generation of engineers, biologists, physicists, social scientists and chemists all look to contribute to humanity’s next great leap. It will require a sustained global effort and, we hope, inspire a new generation of courageous leaders. A Mars mission and these new space pioneers have the potential to unite our own planet and create the scaffolding to propel humanity forward. In the words of Neil Armstrong: “I flew to the moon not so much to go there, but as part of developing the system that would allow it to happen.”

This article was originally posted in the Australian Financial Review. View the original article.

Previous post:
Moon landing memories from our crew on the ground
Coming up next:
Remembering the Starman: Life (and death) on Mars using synthetic biology