Huw Morgan, who curates this blog, confesses to having eaten crickets and spiders. In Vietnam. Deep-fried. And how were they? “Crunchy.”

Eating insects is something many cultures do. In Australia, bogong moths, honey ants and witchetty grubs have been on the menu. For those who have not yet indulged, consider: insects may in future come to a plate near you.

In the Wall Street Journal last year two Dutch entomologists pointed out the advantages of eating insects.[1] They’re “high in protein, B vitamins and minerals like iron and zinc”, “easier to raise than livestock” and “produce less waste”. (To which one might add, they might be more acceptable to some vegetarians and animal rights activists.It’s hard to imagine a scandal over slaughterhouse practices if the animals being dispatched are mealworms.) 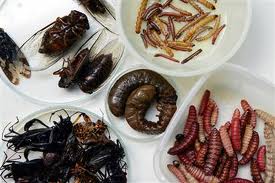 Do you want fries with these?

Outraged readers posted their displeasure: “You couldn’t pay me to substitute insects for meat … I’d start raising my own cattle and chickens before that EVER happened.” Someone who’d sampled a few kinds of critters was not impressed: “Sand worms are OK, but they scream for ketchup.”

But eating insects does have advantages – and in a small, densely populated country such as the Netherlands, they must loom large.

Some of those advantages would be shared by cultured muscle tissue – artificial meat – and indeed attempts are being made overseas to develop such a product.[2] Perhaps artificial meat will come into production, and gain acceptability, before “table insects” do.

I will not make a lame “waiter there’s a fly in my soup” joke.

American food writer Michael Pollan, quoting the anthropologist Claude Levi-Strauss, points out that food must not only be “good to eat” but also “good to think”. Would you eat insects? Would I? I’ve never eaten insects myself: among the molluscs, I’ve happily eaten oysters but drawn the line at snails, even ones raised for the table. We’ve worked hard to keep insect pests at bay, both in the field and on the shelf; worked hard to keep the weevils out of the flour and off our plates. Could we ever turn this loathing around?

The boundaries of acceptability will be shaped by circumstance. World population is increasing by 77 million a year. About 43 per cent of Earth’s land is already given over to cities or agricultural landscapes. If we don’t become more efficient in food production, this amount is set to grow – with possibly dire effects on the whole biosphere, biologists worry.[3] Given this, eating insects may come to look increasingly sensible. Pass the crickets, please.

Previous post:
Fast Fact!
Coming up next:
Ship building doesn’t get any faster than this!