Join Olympic swimming great Cameron McEvoy and learn about our work with hexapods; six legged robots that could one day save lives. 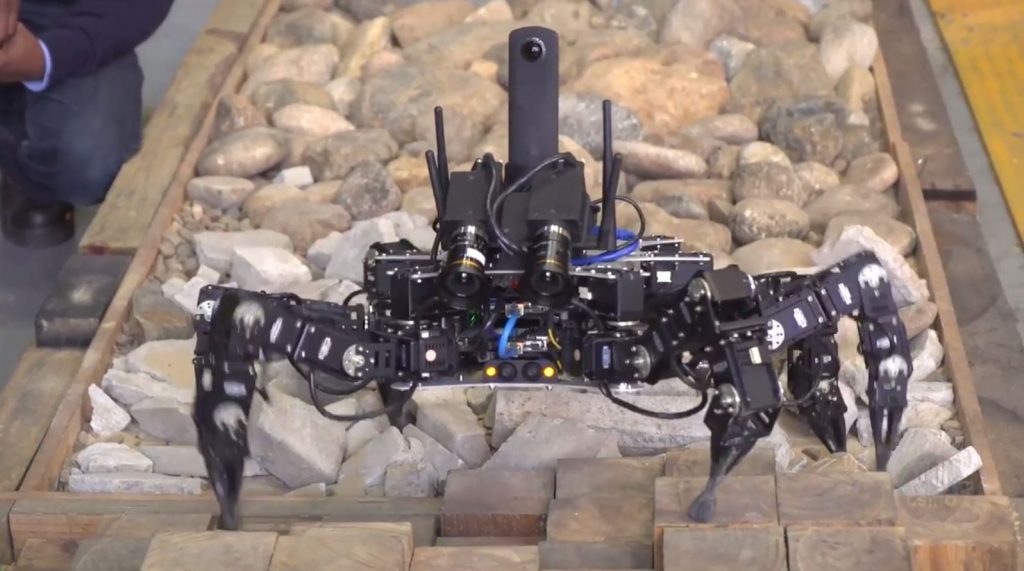 In an emergency, first responders often have to make a very tough call: can I enter the area safely or is it too dangerous? It’s the most extreme risk vs reward analysis anyone could ever face, and the call is often made in mere moments and with very little information. In the future, this decision will hopefully be much easier with the help of some six legged robots: hexapods. Creating robots that can go into an unpredictable, unstable environment and help people escape it would be a literal life-saver.

You know how people are always talking about how robots are going to steal our jobs and take over the world? Well this is one job we wouldn’t mind them taking.

Wheel what have we here? 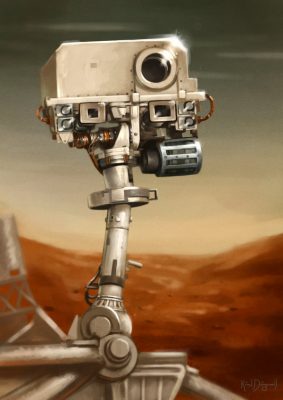 A drawing of Curiosity on Mars

You know you’ve made it when people start drawing fan art of you. Credit: Kim Dingwall

There are some pretty amazing robots on wheels. Case in point: NASA’s Curiosity. Wheels are great for moving fast, they’re stable and they are easy to build. So why the obsession with legs? Well, wheels have their drawbacks: they can’t go side to side (well, most of them can’t!), they can’t cross over gaps, can’t climb over obstacles and they’re basically turtles; flip them on their back and they’re useless. Legs are the answer. So why haven’t we done it already? Because legs are significantly complicated.

Humans have been trying to create humanoid robots for centuries. But being able to walk on two legs is a significant achievement that took us millions of years to perfect. To simply balance, many complex body systems work together (and even compensate for each other when required). There’s our vestibulo-ocular reflex (our eyes and inner-ear working together), our nervous system and the body’s sense of where it is in space: proprioception. We also have baroreceptors, sensors in our blood vessels that sense blood pressure (like a barometer and air pressure), that tell our heart to pump blood faster when we stand so we don’t faint.

When designing a robot, scientists have to decide what kind of stability it will use: dynamic or static. As its name suggests, a statically stable robot will be stable when standing still. Basically – any robot with three legs or more can do this without trying. Dynamically stable robots are stable when moving (think about how much easier it is to hop on one leg than standing still on one leg). Obviously, a dynamically stable robot is much harder to control and significantly more complex however they are more energy efficient and faster. Most scientists are working to create something that is the best of both worlds. For us, we’re doing this with hexapods. 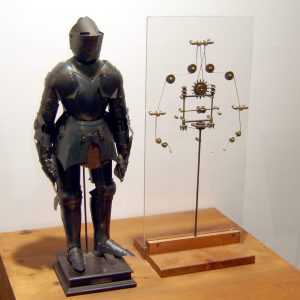 Model of a humanoid robot based on drawings by Leonardo da Vinci.

Model of a humanoid robot based on drawings by Leonardo da Vinci. Photo by Erik Möller.

The invention of sensors like accelerometers and gyroscopes have helped scientists take the next *step* forwards in balance and stability, but that’s only the start of the many complex problems scientists have to solve before our robot dreams can turn into reality.

Do you enjoy scrambling around rock pools at the beach? Ever notice how you moved when climbing? It wasn’t the same as if you were walking on the footpath was it? You slow down, use your hands for stability and test the movement of each rock before committing all your weight on it. Your joints play a vital role in stability in rough terrain. Toes, ankles, knees, hips and your back all make minute and major adjustments to keep you stable.

Having flexible legs with multiple joints improves stability on rough terrain. Our first hexapod models had three ‘joints’ per leg. They were fantastic at walking on a flat surface, but as soon as they encountered a steep hill they lost their grip.

Our latest hexapod models have two extra ‘joints’ per leg and can now tackle up to 50 per cent inclines. This is because they can widen their stance, creating a larger support polygon and shifting their centre of gravity to be within this polygon. 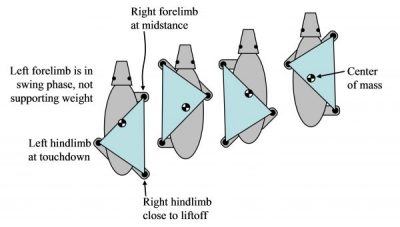 The gait (walking style) of the robot plays a big role in how fast and efficient it will be. When deciding which gait a robot uses you’ve got two options: fast, efficient but unstable or slow, stable, but inefficient. Neither option would work in real-life. So what’s the solution? The robot needs to be able to change how it moves depending on the situation. This is called ‘dynamic movement.’ Our hexapods constantly test the surface and will automatically change their gait and speed to stay stable and energy efficient.

Our legged robots have got all the right moves, click here to learn more about them.