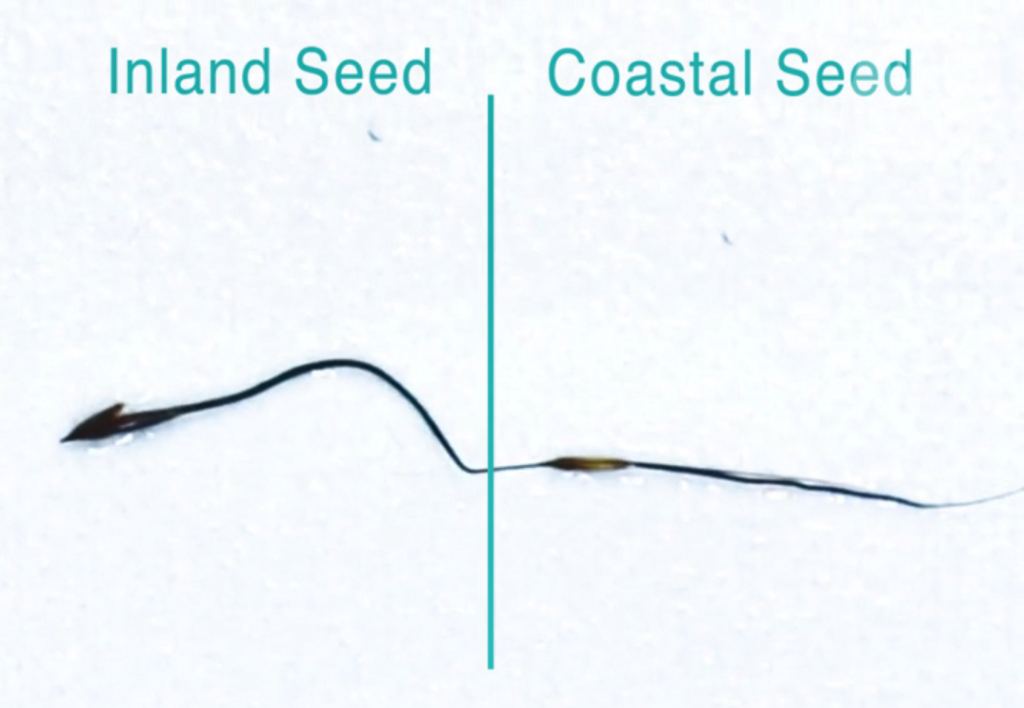 Two Kangaroo Grass seeds side by side

Themeda triandra, commonly known as kangaroo grass, is a native perennial grass that grows widely across Australia. It produces spear-shaped seeds that are activated by water, either through increased humidity or when it rains. These hygroscopic seeds wiggle, wind and jump their way across the landscape in search of a suitable place to bury themselves and, ultimately, begin to grow.

The seeds of kangaroo grass plants from inland populations have larger seeds with longer tails (awns) than their coastal relatives. They can travel further and faster over short distances along the ground.

There are also significant genetic differences between some populations: inland plants are more likely to be polyploid than their coastal relatives, which are usually diploid.

It has long been theorised that polyploidy is advantageous for plants growing in extreme habitats. In a recent paper, Bob and colleagues showed how this works in kangaroo grass.

“In our experiments we found that drought and heat-stressed polyploid plants produced over four times as many seeds as diploid plants under the same conditions. The seeds of polyploids were also consistently heavier and had longer awns, which is the tail-like mechanism that the seeds use to manoeuvre themselves across the ground,” Bob said.

“Polyploid kangaroo grass seeds are able to transport themselves greater distances than diploid seeds, which increases their chance of finding a suitable location to grow. This also expands the distribution of the species and reduces competition for resources between the seedlings and the parent plant.

“Seeds with longer awns also seem to be able to bury deeper into the soil, which we think might give them an advantage in harsh environments, including arid areas,” he said.

Being able to withstand drought and heat-stress is a very convenient trait to possess in a warming environment.

“Polyploidy might be a useful trait to consider when selecting plants for restoration purposes in a changing climate,” Bob said.

Bob and Annette, who is now with La Trobe University, are continuing their experiments by measuring awn length in other species of Australian grasses, using seed from plant specimens in the Australian National Herbarium.

“We’re interested in species with broad geographic coverage that have awns that differ in size and shape. We want to find out whether there is evidence for evolution towards longer awns in drier and warmer environments,” Bob said.

Find out more about our national collections

Previous post:
Dragon sex and the path to maleness or femaleness (and back again)
Coming up next:
Helping put the Great Barrier Reef on the road to recovery