The first people to make it to Australia could have navigated their way by sea crossing, reaching the north-west coastline of the island continent. 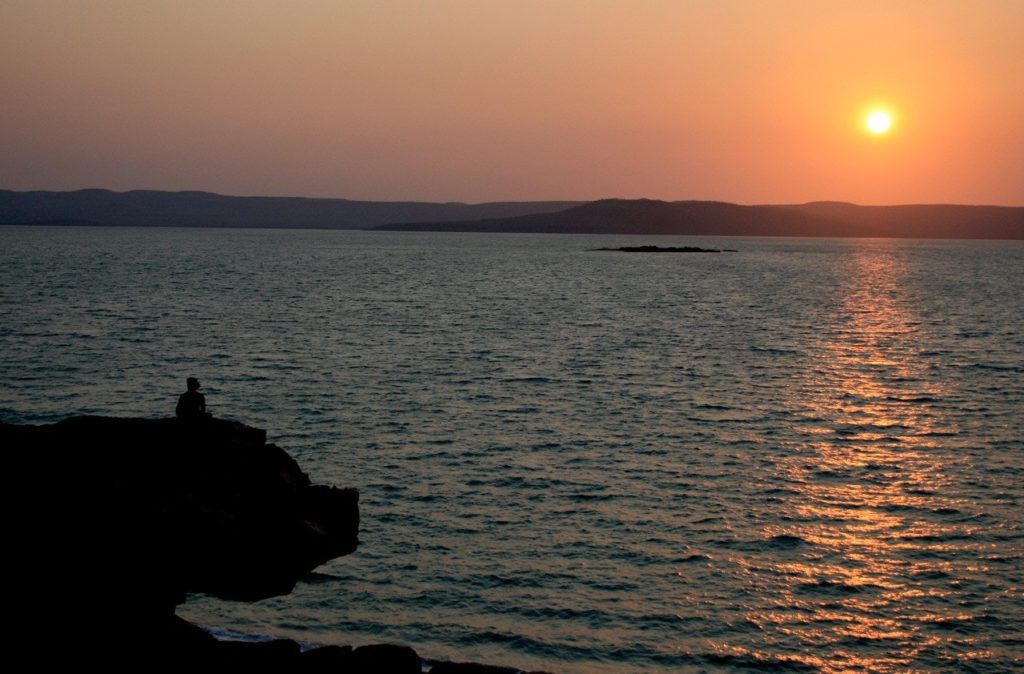 Sunset looking across Port Warrender to the Mitchell Plateau on the Kimberley coast. It is in Wunambal Gaambera country. Image: Mark Jones Films (with permission), Author provided

Over just the past few years, new archaeological findings have revealed the lives of early Aboriginal Australians in the Northern Territory’s Kakadu potentially as early as 65,000 years ago, from the Kimberley and Pilbara regions of Western Australia by about 50,000 years ago, and the Flinders Ranges of South Australia by around 49,000 years ago.

But how was it even possible for people to get to Australia in the first place? And how many people must have made it to Australia to explain the diversity of Aboriginal people today?

In a study published in Quaternary Science Reviews this week, we use new environmental reconstructions, voyage simulations, and genetic population estimates to show for the first time that colonisation of Australia by 50,000 years ago was achieved by a globally significant phase of purposeful and coordinated marine voyaging.

Australia has never been connected by dry land to Southeast Asia. But at the time that people first arrived in Australia, sea levels were much lower, joining the Australian mainland to both Tasmania and New Guinea.

Our analysis using new high-resolution mapping of the seafloor shows that when sea levels were 75 m or lower than present, a string of more than 100 habitable, resource-rich islands were present off the coast of northwest Australia.

These islands were directly visible from high points on the islands of Timor and Roti and as close as 87 km.

This chain of now mostly submerged islands – the Sahul Banks – was almost 700 km long. They represented a very large target for either accidental or purposeful arrival. 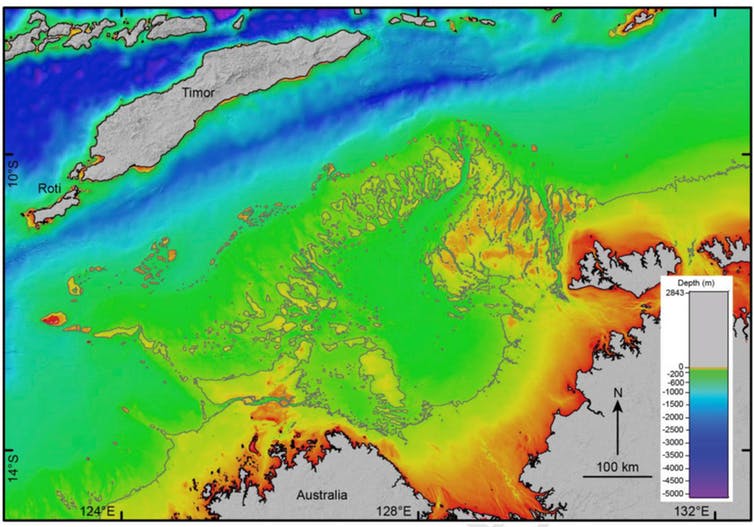 Northwest Australia showing a now submerged string of islands between Australia and Timor/Roti. The present coastline is shown as a black line. The coastline with sea level 75m lower than present is shown as a grey line. Image: Robin Beaman

How difficult was it to get to Australia?

Combining modelled winds and ocean currents with particle trajectory modelling, we simulated voyages from three sites on the islands of Timor and Roti. This is similar to the approach used to model the movements of wreckage from the missing Malaysia Airlines flight MH370.

In our model, we simulated the “launch” of 100 vessels from each site on February 1 each year for 15 years. The date was chosen to correspond to the main summer monsoon period when winds are generally blowing to the east-southeast, thereby maximising the chance of successful crossings. 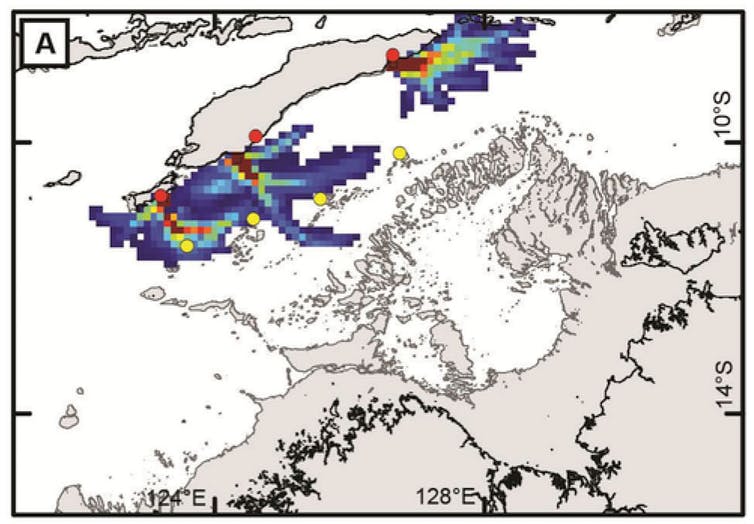 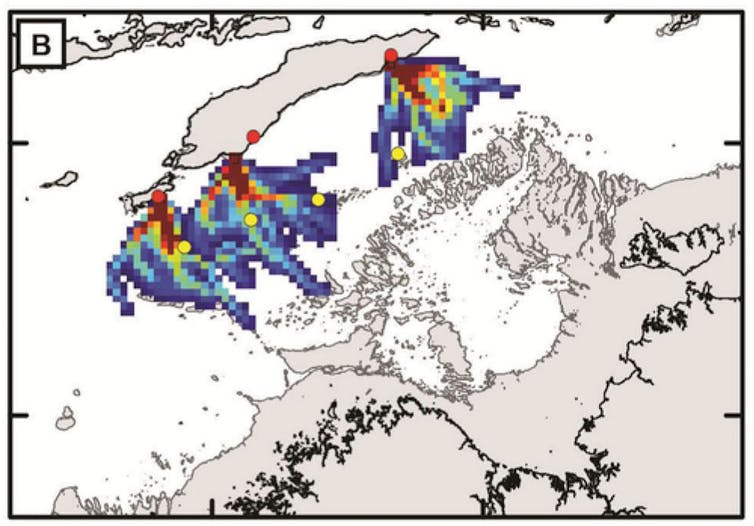 The results clearly indicate that accidental arrival by drifting alone is very unlikely at any time. But the addition of even modest paddling towards the Sahul Banks islands results in a high proportion of successful arrivals over four to seven days. The highest probability of a successful landfall is associated with launching points on western Timor and Roti.

How many people did it take to colonise Australia?

Researchers have long speculated about how many people originally colonised Australia. Some have argued that Australia must have been colonised by accident, perhaps by just a few people.

Others have suggested a steady trickle of colonists. Estimates of the founding population have ranged from 1,000 to 3,000.

The genetic evidence shows that Australia was colonised in a single phase, perhaps at multiple locations, but with very limited gene flow after initial colonisation.

Assuming that every mitochondrial lineage was represented in the founding population by four to five females (such as a family group containing a mother and her sister, and two daughters) the currently known nine to ten lineages would equate to around 36-50 females.

This is a conservative estimate, as founding populations of fewer than ten females per lineage have a low chance of long-term survival due to variations in reproductive success.

If an overall, again conservative, female to male ratio of 1:1 is assumed for the colonising party, the inferred founding population would be around 72-100 people. It was likely much larger (perhaps 200-300) because of the strong potential for related family groups to share similar mitochondrial lineages, which would be underestimated as a single founding lineage.

Clearly, a population of even the minimum estimated size is unlikely to have arrived accidentally on Sahul.

What does it all mean?

A lot of earlier thinking about how people arrived in Australia was based on the assumption that the first modern humans to sweep out of Africa and colonise the distant lands of Australia and New Guinea were somehow more limited in their cognitive and technological capacities than later humans (that is, all of “us”).

The crossing to Australia was two to three times longer than the multiple previous shorter crossings required to reach the islands of Timor and Roti. This last voyage to reach Australia would have required watercraft construction, sailing and navigation technology, planning ability, information sharing and provisions to sustain an open ocean voyage over four to seven days.

Purposeful voyaging on this scale clearly required advanced cognitive, linguistic, symbolic and technological capabilities. Critically, this finding places a unique global time-stamp on the cognitive abilities of our ancestors.

This emerging picture of modern humans with advanced maritime capabilities deliberately settling the driest continent on the planet reminds us we still have much to learn about the complexity and adaptability of the First Australians.

Originally published on The Conversation

Previous post:
New calculator helps you personalise your protein needs to support weight loss
Coming up next:
Social media is a window to privacy’s biggest issues