Hot on the tracks of feral animals in the Top End

Hot on the tracks of feral animals in the Top End

Our new tracking tech is helping manage the impacts of feral buffaloes and pigs in Arnhem Land. 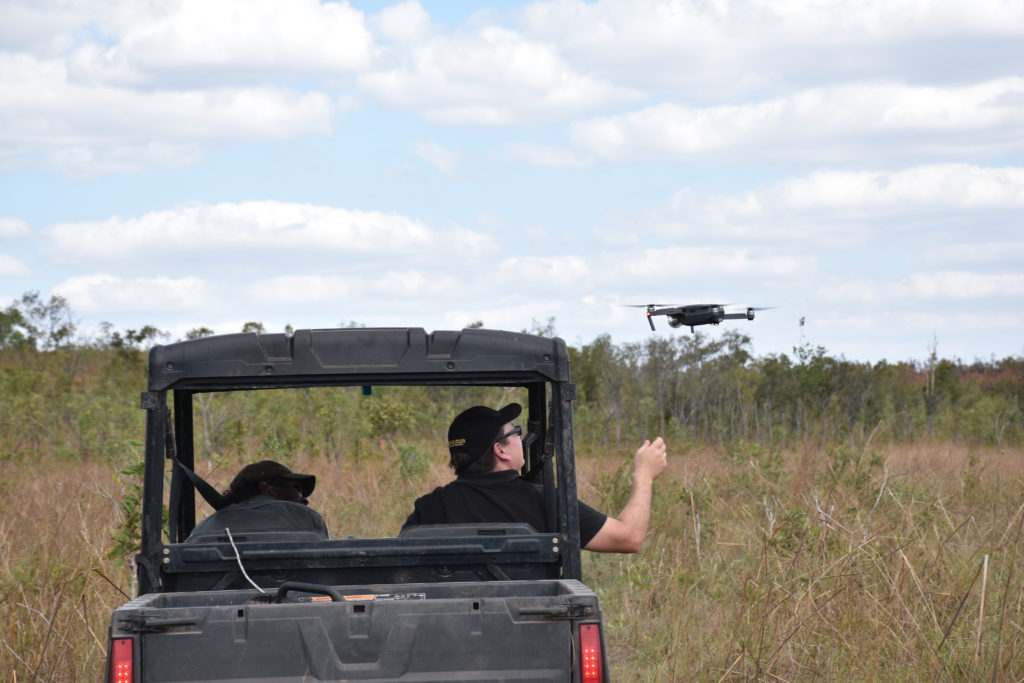 It’s easier to find a feral buffalo than a mobile signal in Arnhem Land, but that hasn’t deterred a team of researchers and Indigenous rangers from connecting a bunch of the region’s feral animals to the internet.

Buffaloes, along with feral pigs, are having a devastating impact on wetlands and important cultural sites in the Djelk Indigenous Protected Area in east Arnhem Land. Feral animals can really wreak havoc, destroying wetlands and creeks, causing declines in water quality, spreading diseases that can be passed on to livestock, and even destroying infrastructure like roads and fences, which are so important in remote areas.

Past attempts at controlling these introduced pests across the Top End have had limited success but recent advances in digital technologies might be about to change that.

Hot under the collar 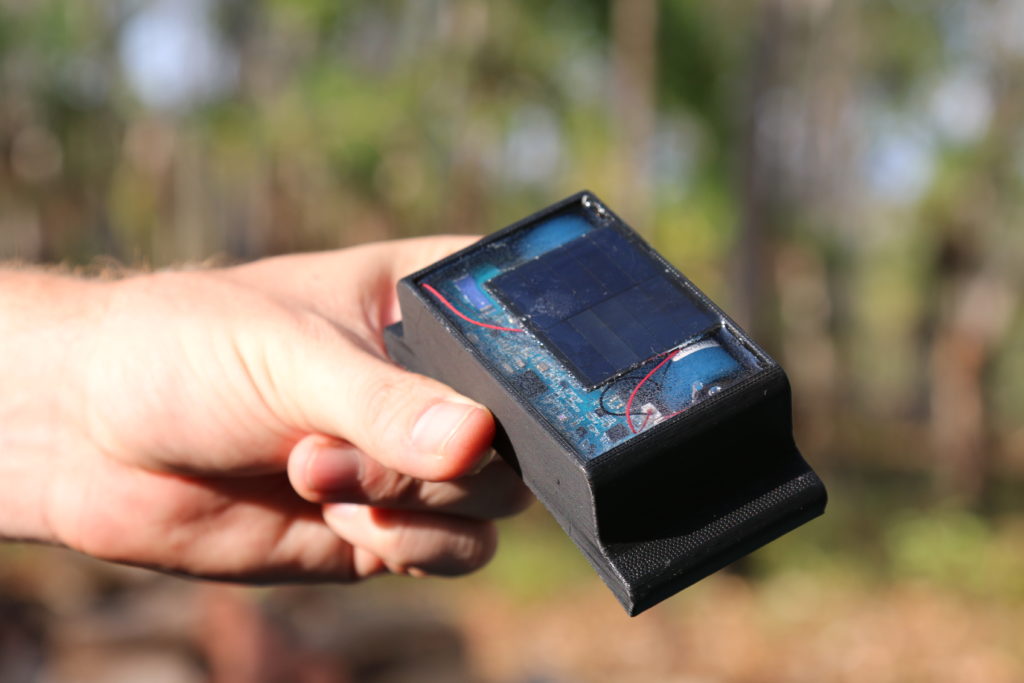 The GPS tracker designed by Data61. It is being deployed using animal collars and has various sensors and a LoRa on board wireless communication system, allowing researchers and managers to track the animals.

A new technology we’ve developed with JCU and Indigenous Ranger groups in Arnhem Land and Cape York, is bringing invasive species monitoring into the internet age and allowing for real-time monitoring of the animals. The system uses new electronic GPS trackers attached with animal collars and an array of environmental sensors embedded in the landscape. Telecommunication infrastructure then receives the signals from the trackers and sensors, to deliver information about the feral animals and the habitats they frequent.

The GPS trackers, developed in-house by our Data61 researchers, were made at a fraction of the cost of commercially-available alternatives. This has opened up the prospect of conducting large-scale tracking projects that simply haven’t been economically feasible before. They have an on-board wireless communication system, called LoRa, which is low-power and long-range. Both the GPS trackers and the environmental sensors upload their data to our Senaps cloud service in near real-time, as the animals are roaming around. 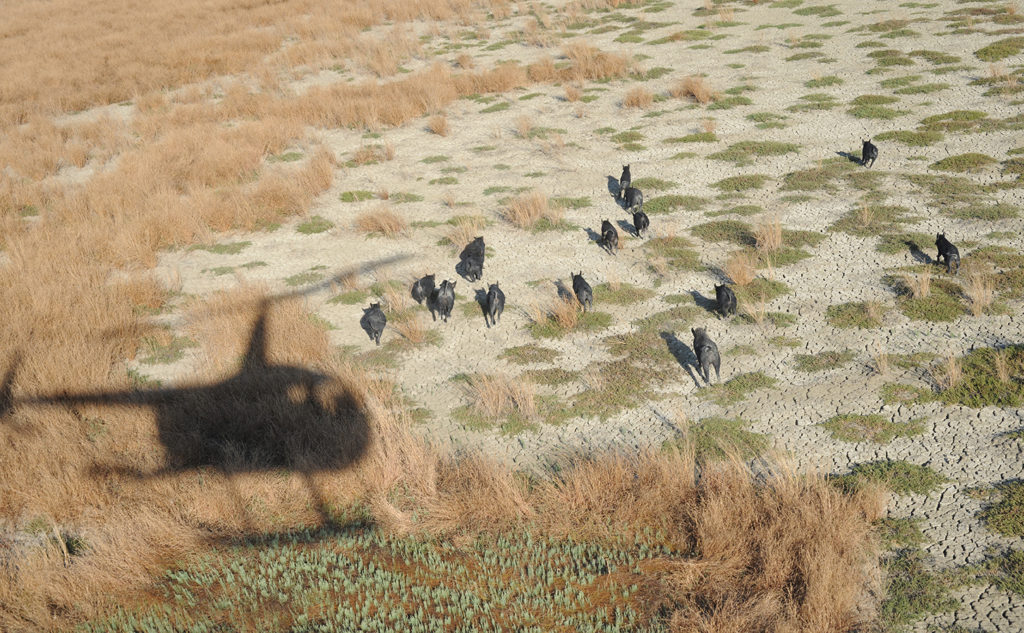 On the trail of feral pigs in Cape York. Image: Brian Ross

All the elements of the tracking system are things that work readily in our well-connected cities, like in our Brisbane workshop where the initial testing took place. But what happens when you take it out into some of the remotest areas of Australia?

When the team took their equipment to the Djelk Indigenous Protected Area in Arnhem Land in November 2017, they found that testing technology out in the scrub of the Northern Territory presented a unique set of challenges. While everything worked in the town of Maningrida (500 km east of Darwin), as soon as the team ventured out of town to the vast floodplains where Buffalo and pigs can be found, they found themselves out of range of mobile networks. A hill that was picking up 3G signal seemed a promising place for their communications base station, but upon further testing discovered the signal was too intermittent to work. 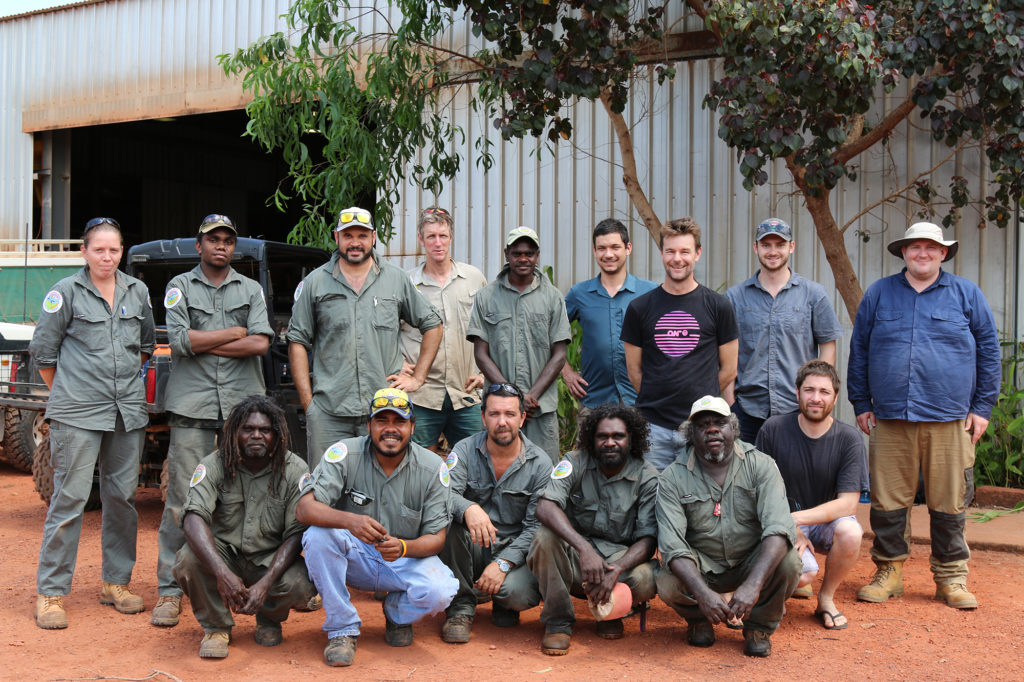 This is where the local expertise of the Djelk Rangers came in. The system would only work if it could connect to communications infrastructure and if their own infrastructure could be placed close enough to where the animals are. The rangers, with their intimate knowledge of the landscape, are able to advise on the places where the feral animals are most frequently found, allowing for optimal positioning of sensors and communications equipment. They also have the unique on-the-ground skills required to track down and collar the animals. 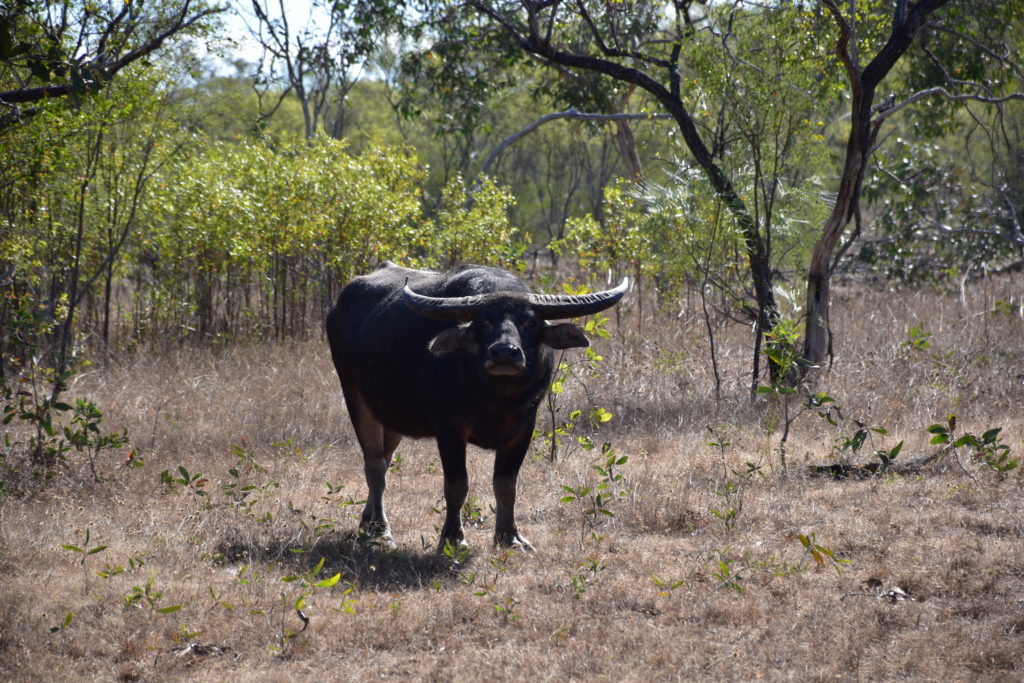 In the end, the team were able to connect to Maningrida’s WiFi signal and use a series of relay nodes to connect up the environmental sensors and GPS trackers with the communications base station. Ecologist Eric Vanderduys took a GPS tracker for a trek through the bush to confirm everything was online, with the team watching on as his tracks appeared on their monitoring equipment. Eric’s trek would prove a valuable rehearsal run for the main event, which came last week, when the Kalan Rangers of eastern Cape York managed to capture and collar a feral pig with the help of the project team. We are pleased to report that we are now able to follow the movements of Nic the pig, named after one of Data61’s developers of the tracking technology, Nic Heaney. 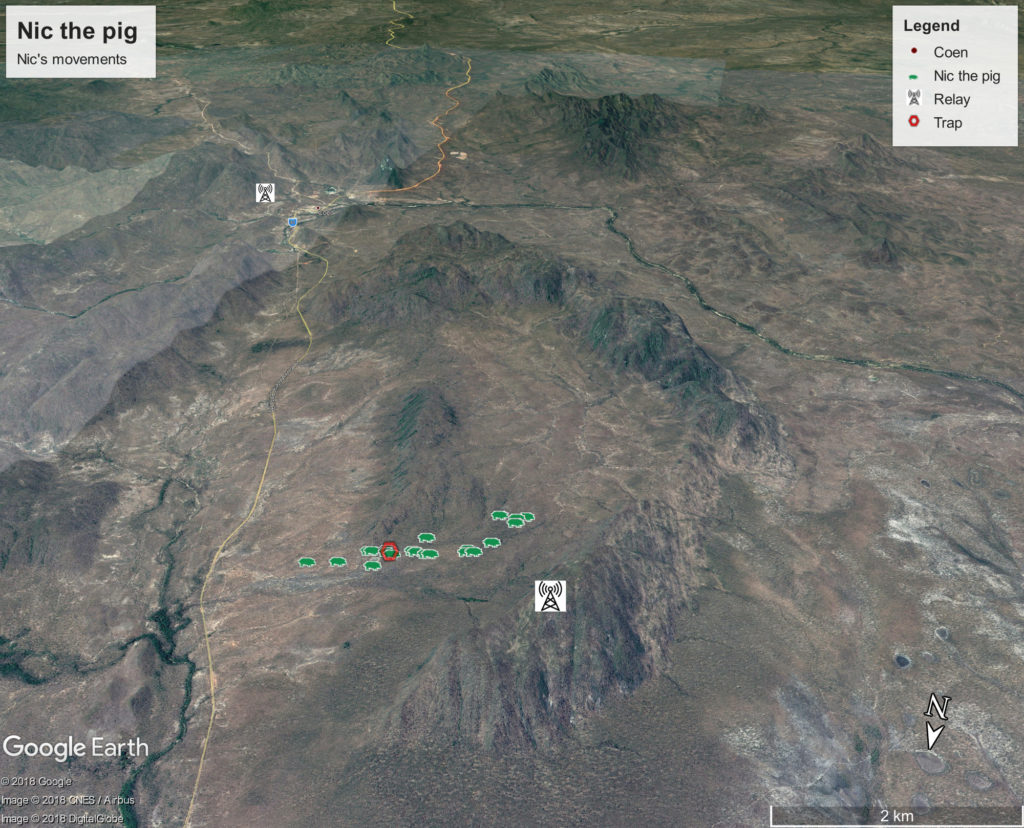 The team are now following the movements of Nic the pig, the first feral animal collared with the tracking technology near Coen, Cape York. This Google Earth image shows where Nic has travelled since being trapped and collared on 28 March.

The data that will be collected by this system will also feed into a model that is able to ‘learn’ the behaviour of the animals over time, using machine learning, and eventually to predict what their future behaviour will be. The model uses the data from the environmental sensors, which capture things like the temperature and humidity of particular parts of the landscape, together with the data about the animals’ movements to learn where the animals are likely to go under specific weather conditions. It might tell us, for example, that in the heat of the day feral pigs head for a particular cool, shady spot.

Working closely with environmental managers like the Indigenous Ranger groups is ensuring that the new tracking system is co-designed by the people who will need to use it to manage the impacts of feral animals. This means that the technology and the insights it delivers will be ready to use in the areas where it is most needed, sooner, and has the potential to change our long-term management strategies for feral animals impacting the outback. 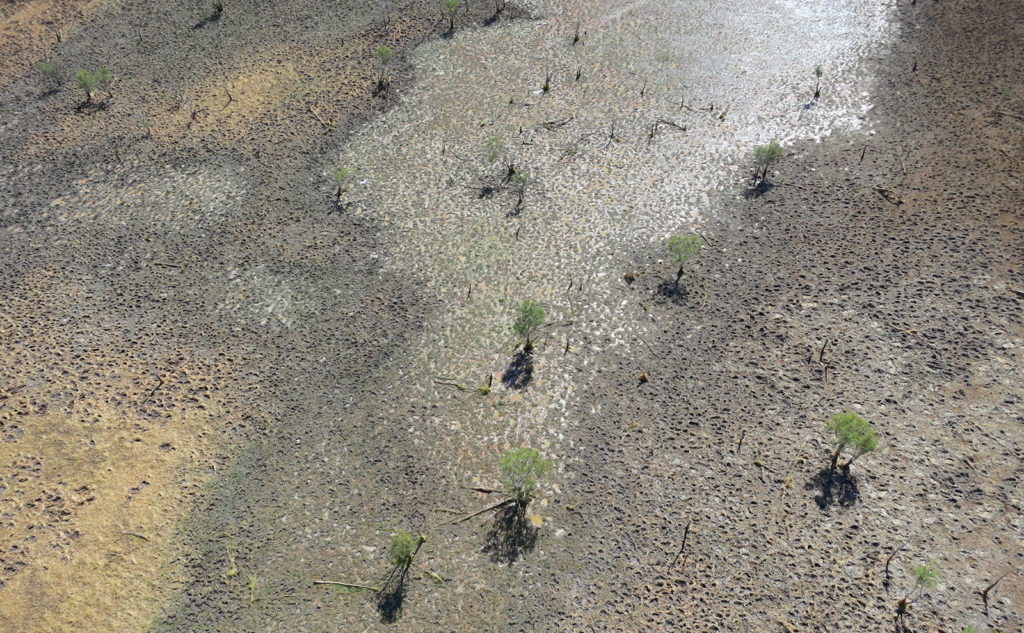 What’s left of a coastal lagoon on Cape York after being visited by feral pigs. Image: Brian Ross

And why limit it to remote Australia? There’s no reason why this system can’t go global too, helping manage ecosystem threats around the globe.

We’ve got a number of projects underway to better manage feral animals.

Track down more of our research

Previous post:
Farmers grab technology by the horns
Coming up next:
Athletes aren’t the only ones going for gold