Hidden galaxies, a Great Attractor and other wonders of the Zone of Avoidance

Hidden galaxies, a Great Attractor and other wonders of the Zone of Avoidance

A team of international astronomers using our Parkes Radio Telescope have just announced the discovery of hundreds of new galaxies, each containing billions of stars, living right on our astronomical doorstep. 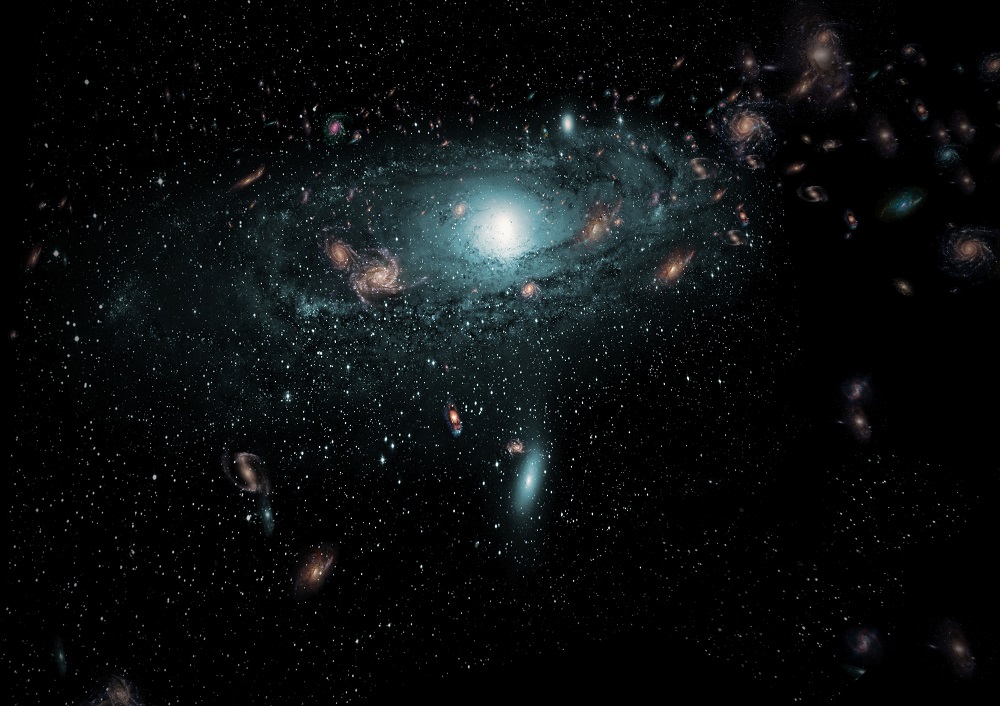 An artist’s impression of the galaxies found in the ‘Zone of Avoidance’ behind the Milky Way. This scene has been created using the actual positional data of the new galaxies and randomly populating the region with galaxies of different sizes, types and colours. Credit: ICRAR

Have you ever looked up into the cosmos on a clear night, with the hundreds of thousands of stars from our home galaxy – the Milky Way – twinkling back at you, and felt just a little insignificant? Well, buster, hold on to your hat – because that ain’t the half of it.

A team of international astronomers using our Parkes Radio Telescope have just announced the discovery of hundreds of new galaxies, each containing billions of stars, living right on our astronomical doorstep in an area delightfully dubbed the Zone of Avoidance. And what’s more, this Zone of Avoidance obscures the Great Attractor: a distant galaxy supercluster pulling our own Milky Way and other galaxies in its sphere of influence towards it at two million kilometres an hour, with the gravitational pull equivalent to one million billion suns.

Yes, that feeling in the top of your skull right now is in fact a small piece of your brain exploding.

But fear not, lowly human. Despite the litany of ominous terms and mind-bending stats, this is announcement is less Mulder (aliens and end-of-the-world conspiracy theories) and more Scully (amazement at the wonders of rigourous science). And it’s thanks in no small part to the unique skills and location of our famous Parkes ‘Dish.’ 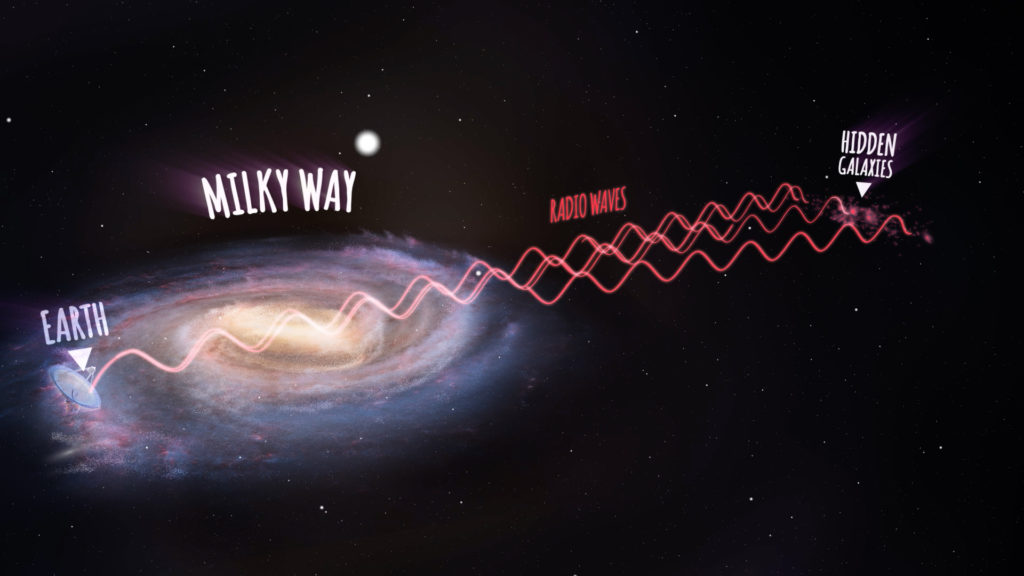 An annotated artist’s impression showing radio waves travelling from the new galaxies, then passing through the Milky Way and arriving at the Parkes radio telescope on Earth (not to scale). Credit: ICRAR

It turns out this Zone of Avoidance isn’t actually Kings Cross on a Saturday night,  but instead an area where several filaments extremely rich with galaxies intersect, obscured from our line of sight by the stars and galactic dust of the Milky Way. But, thanks to the Dish – our 64-m Radio Telescope – being able to observe the large quantities of hydrogen, we can “see” through to the other side of the Milky Way and detect these hidden galaxies and measure not only their location, but also their motions, hydrogen mass and dark matter mass.

And being in the southern hemisphere means that the centre of our Galaxy goes overhead (rather than being low down on the horizon, for instance), which is great for observation.

Close up image of the Parkes Radio Telescope.

Looking up towards the multibeam receiver from the surface of our Parkes radio telescope. Image credit – Yiannis Gondakis.

Dr Bärbel Koribalski, from our Astronomy and Space Science team, said innovative technologies on the Parkes Radio telescope had also made it possible to survey large areas of the sky very quickly.

“With the 21cm multibeam receiver on Parkes we’re able to map the sky 13 times faster than we could before and make new discoveries at a much greater rate,” she said.

All in all, the team found a total of 883 galaxies hidden behind the Milky Way – a third of which had never been seen before.

“An average galaxy contains 100 billion stars, so finding this invisible neutral hydrogen gas in hundreds of new galaxies hidden behind the Milky Way points to a lot of mass we didn’t know about until now.”

Like the Great Attractor, for instance. Astronomers have been trying to figure out what exactly this mysterious Great Attractor is since major deviations from universal expansion were first discovered in the 1970s and 1980s.

“We don’t actually understand what’s causing this gravitational acceleration on the Milky Way or where it’s coming from,” said Lead author Professor Lister Staveley-Smith, from The University of Western Australia node of the International Centre for Radio Astronomy Research (ICRAR).

“We know that in this region there are a few very large collections of galaxies we call clusters or superclusters, and our whole Milky Way is moving towards them at more than two million kilometres per hour.”

To explain: once we’d wrapped our heads around the idea of an expanding universe – all the galaxies moving apart from each other – we then found that that wasn’t completely, absolutely the case everywhere. Mysteriously, a bunch of galaxies, including ours, appeared to be pouring towards this unseen Attractor. It’s sort of like being at a music gig and being part of the crowd that is pouring through the doors of the venue. You can’t see the band yet, but that’s what you’re all heading towards.

The research identified several new structures that could help to explain this movement of the Milky Way, including three galaxy concentrations (named NW1, NW2 and NW3) and two new clusters (named CW1 and CW2).

But no need to cancel your holiday plans just yet: according to our calculations it should take us around 1,350,028,853,551 years to get this great big gig in the sky. And by that time, the show will well and truly be finished.

The study involved researchers from Australia, South Africa, the US and the Netherlands, and was published in the Astronomical Journal.

For more information on our work in space and astronomy, visit our website.

Previous post:
How we’re prepared for Zika and other mosquito-borne viruses
Coming up next:
NASA Earth Venture Pre-Orbital mission a game changer for coral reef health